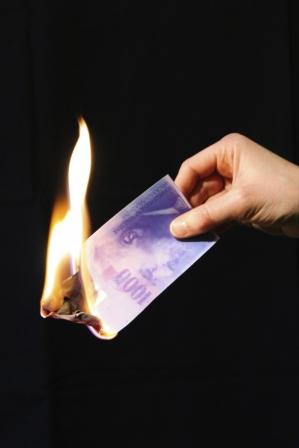 With the worst of the global financial crisis seemingly over, academics and policymakers have begun to assess the performance of governments and central banks during the period, seeking ways to better deal with future crises. Olivier Blanchard, chief economist at the International Monetary Fund, recently published a paper advocating that, among other steps, governments and central banks raise inflation targets.

The benefit of a little more inflation
The IMF argues that a low rate of inflation limits the scope of monetary policy in a downturn by putting an effective floor under the real, inflation-adjusted interest rate that central banks can use to stimulate economic activity. Negative real interest rates can help speed recovery, but since nominal rates can’t fall below zero, a central bank can push real rates into negative territory only as far as the amount of current or expected inflation. A -2% real interest rate, for instance, requires at least 2% inflation (if the nominal rate was zero).
Japan is currently facing this problem. Although the Bank of Japan lowered its overnight call rate to 0.1% in December 2008, the onset of deflation means the real cost of borrowing has risen. This is discouraging investment and hurting borrowers by increasing the real value of their debts. A policy targeting higher inflation could have avoided this situation, by increasing the efficacy of low nominal interest rates and by reducing the likelihood of a lapse into deflation in the first place.
The IMF notes that the Taylor rule—a widely used tool for estimating where the fed funds rate in the U.S. should be—suggests that a real interest rate between -3% and -5% would have been appropriate in late 2008, given the U.S. economy’s large output gap. Yet with inflation in the U.S. at 2%, the lowest real rate the Fed can achieve, even at a nominal zero rate, is -2%.
Arguments for higher inflation are controversial, to say the least, and threaten to dislodge a decades-old macroeconomic policy consensus. Critics of the IMF position note that inflation is regressive, hurting those living on fixed or low incomes, while benefiting those who have the ability to hedge against rising prices, typically the wealthy. Yet this problem can be alleviated through policies such as a negative income tax for those at the low end of the income scale.
More asset bubbles
Critics also worry that a higher inflation target will encourage more asset bubbles like the property boom that preceded the financial crisis. But managing asset markets is arguably already beyond the ability of a central bank working with just a single policy rate. Indeed, countries with a wide variety of benchmark interest rates saw rapid increases in house prices in the years leading up to 2008.
For this reason, the IMF advocates adding countercyclical regulatory tools to the central bankers' kit. Policymakers should be able to target activity in specific markets, imposing higher loan-to-value ratios for mortgages if housing heats up, higher bank reserve ratios to curb excessive lending growth, or higher margin requirements if stock prices appear irrationally exuberant.
Such rules can be tightened or relaxed to lean against the business cycle. Yet undertaking to smooth asset prices leads to questions regarding a central bank's ability to determine the "correct" price of assets. One offsetting argument is that central banks are in the business of smoothing output. Making similar judgment calls about asset markets, which they already watch closely, should not be radically different.
Anchored expectations
But while there are theoretical benefits to higher inflation targets, the IMF will have a tough time convincing central bank heads in the developed world. “I don’t agree at all with what the IMF paper said,” Reserve Bank of Australia governor Glenn Stevens declared in a recent parliamentary hearing.

A higher inflation target would be "diabolical," in the words of ECB executive board member Lorenzo Bini Smaghi. His fellow board member and head of Germany's Bundesbank, Axel Weber, said it was careless for the IMF to even bring up the idea in public, as it could feed inflation expectations.

Governments and central banks in most developed economies have worked hard since the stagflation era of the 1970s to anchor inflation expectations at a relatively low level, generally around 2%. Governments in many countries have mandated explicit inflation targets for their central banks and given them a degree of independence to achieve that goal. This will not be thrown away lightly.
Given the state of public finances in many countries, a higher inflation target could be seen as an indirect move by governments to shrink their liabilities by reducing the real cost of debt. Bond markets would not take this favourably, nor would international lenders, who could respond by driving down the currency or dumping a nation's sovereign debt. And to the extent that households believe governments are inflating away their real financial obligations, inflation expectations could rise in future.
Moreover, the zero bound for nominal interest rates does not by itself render monetary policy impotent. Central banks can employ additional tools, such as expanding balance sheets through quantitative and credit-easing policies. The global financial crisis has produced some unorthodox policy experiments: Sweden's Riksbank set a penalty for commercial banks' reserves (i.e. a negative interest rate) in July 2009, while the Swiss National Bank has opted for currency depreciation.
Implications for Asia
Higher inflation targets could work for emerging nations, such as China and India, however. The People's Bank of China and the Reserve Bank of India have yet to adopt explicit inflation-targeting policies, and hence have the flexibility to begin targeting a slightly higher rate than their developed-economy counterparts.
A policy of moderately higher inflation appears to be favoured by officials in China, at least for the near- to mid-term. The recovery in China’s economy is bringing increased political and market pressure to strengthen the yuan against its trading partners' currencies. Higher domestic inflation in China has some of the same effect as currency appreciation, raising wages and making locally produced tradeable goods more expensive relative to imports. China is likely to follow the path of Japan and South Korea, both of which chose to permit higher inflation during their development rather than forcing prices to adjust via exchange rates alone.
China's growing economy is increasing the demand for labour, which is pushing wages higher. This is filtering through to consumer and producer prices, which in turn prompt higher wage demands. So long as wages rise in line with worker productivity, the labour force will remain competitive, keeping unemployment low, so it is likely to be endorsed by the government.
Currency appreciation, on the other hand, works to raise real wages by lowering import costs. But although inflation and currency appreciation can have equivalent effects, inflation may be more politically palatable; rising nominal wages are generally more popular than are stories of exporters shutting down.
India's stage of development, meanwhile, means consumer price inflation is driven by food prices; monsoons and drought conditions make prices volatile. Inflation expectations and monetary conditions play a lesser role than does the supply and demand for food, and aggressive efforts by the central bank to cool inflation could cause the economy to grow below trend.
Similarly in other emerging economies such as Indonesia, the Philippines and Vietnam, runaway inflation is a habitual problem. Keeping inflation at a moderately high but stable level could give governments leeway to deregulate product markets and allow a shift in labour to more productive industries. Some academic studies suggest that a policy of targeting a competitive exchange rate and allowing higher inflation could result in a faster rate of poverty reduction.
About the Author
Alaistair Chan is an associate economist in the Sydney office of Moody's Economy.com.