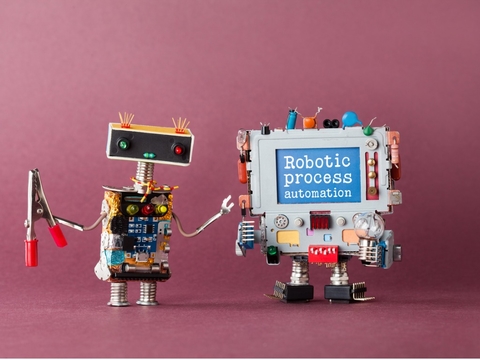 The research was undertaken by market intelligence firm IDC and reported in “Robotic Process Automation in Asia/Pacific Financial Services: Key Learnings from 10 Early Adopters.” The findings include:

The Institute for Robotic Process Automation defines RPA as the application of technology that allows employees in a company to configure computer software or a "robot" to capture and interpret existing applications for processing a transaction, manipulating data, triggering responses, and communicating with other digital systems.

IDC further defines RPA as a software code that automates and assigns standardized, rules-based, repetitive, and high-volume processes involving several interoperable systems — which were traditionally executed by humans — to a robot. To a certain extent, RPA can be described as human-defined decision making, where rules are created by humans, with these rules determining the triggers, process flows, and activities to complete a business process.

Globally, the biggest adopter of RPA is the telecom and IT sector, followed by the banking, financial services and insurance industries, and retail and consumer goods. North America currently accounts for the highest revenue share of the global market, but the Asia Pacific region is expected to grow the fastest, according to P&S Market Research, which forecasts the RPA market to top US$6.2 billion by 2023.

Among the first systems where RPA has been deployed are basic financial and accounting processes, because RPA tools are best suited for processes that are repetitive, rules-based, involve digital data and have predictable interactions with IT applications.

The majority of the RPA deployments until now are at this basic level of automation. But the “real game changer” for financial services institutions, says Sneha Kapoor, Senior Research Manager at IDC Asia Pacific, will be the use of cognitive RPA, where cognitive technologies and advanced analytics are combined with RPA.

“With its ability to deal with data from multiple and disparate sources, cognitive RPA can deliver by designing and launching on-demand, usage-based products that align with current market expectations,” says Kapoor.

Next-generation security will also gain attention, as these systems can monitor activity in real time and capture "bad actor" transactions even if they are outside of the rules-based or heuristic capabilities of other fraud prevention systems.