How to Deal With Slow Internet Speeds in Financial Management 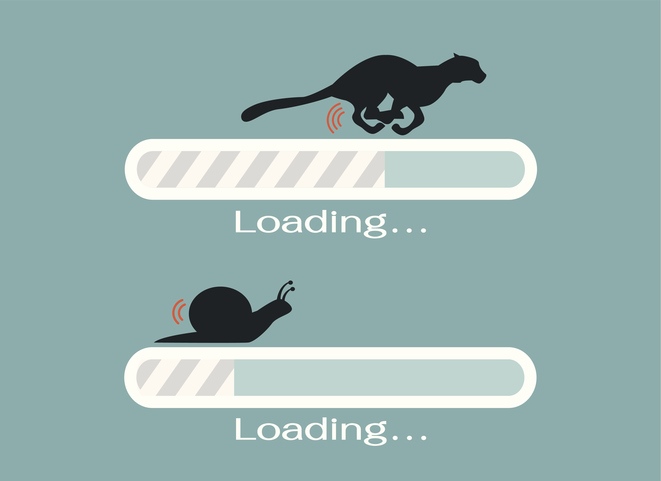 Many countries have come a long way since the dial-up days of the internet, when connections were spotty and accessing a page could take several minutes. But in many parts of the world, including in emerging Asia, unreliable or slow connections are still a problem, even as our dependence on being online to do everything from processing payroll to creating forecasts has grown.

Slow internet speeds have a direct impact on productivity and, therefore, revenue: In 2015, research commissioned by business communications firm Daisy Group found that unreliable connections cost the UK economy £11 billion (about US$16.3 billion in 2015) a year in lost productivity.

A study by TRAC Research found that US$4,100 is the average revenue loss for an hour of slowdowns.

According to the most recent version of content delivery and cloud provider Akamai’s annual State of the Internet report, the global average internet speed, 7 Mbps, has increased 26% over the past year. But while some countries are racing ahead, others are lagging behind.

In Asia Pacific, the Philippines (4.5 Mbps) has the slowest speed among the larger economies, with India only slightly better at 5.6 Mbps, China at 6.3 Mbps and Indonesia at 6.7 Mbps. 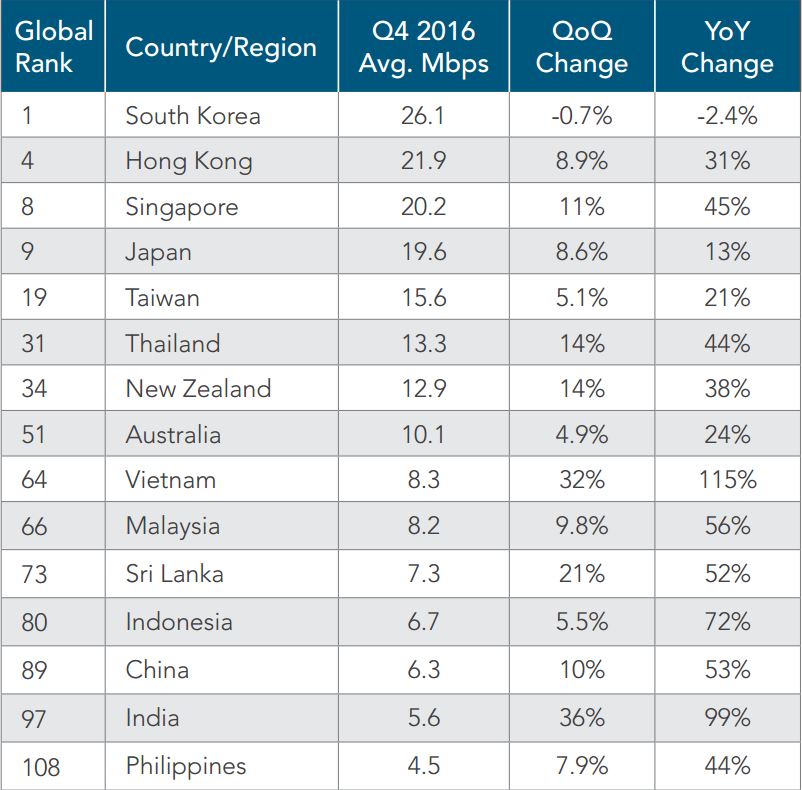 The reasons for slow and interrupted connections can vary. “In some countries, improving connectivity hasn’t been a priority,” said David Belson, editor in chief of the Akamai report. “In some cases, it might be that an authoritarian government is not rushing to give the populace means of organizing and coming together. A lot of it is simply cost, and sometimes geography doesn’t allow it.”

Some interruptions are temporary, rather than systemic. During Hurricane Matthew in October, traffic to Akamai in the Bahamas dropped to about one-tenth of the country’s normal levels.

In Gambia on November 30th, the night before its national elections, web traffic dropped to zero, likely a result of government throttling, Belson said, before returning to normal on December 2nd. In Pakistan, technical issues at the Pakistan Telecommunication Company Limited were blamed for a sudden drop in traffic to the country at the end of last year.

A fast internet connection has become essential for business – for processing tasks as well as for speaking to clients and partners remotely using programs such as WhatsApp or Skype. Employees increasingly use devices other than their workstation computer for work, so mobile phone connections and home Wi-Fi are relevant to productivity, too.

Check the average internet connection speed before you choose a location for an operation, and don’t there may be a disparity between mobile and fixed-line speeds

Here are some solutions companies have come up with in areas where connectivity is spotty or slow:

Line up backups. Javed Hassan, CEO of the Hunar Foundation NGO in Pakistan, said recent disruptions in service in his country have had a negative impact on business, including the finance department.

“Often the ISP line fails – it happens once or twice a month – and we have had to postpone meetings as videoconferencing and Skype are not available,” he said. It also means the organization has not been able to take advantage of new fintech services that depend on consistent and good connectivity, such as accounting programs FreeAgent and KashFlow, which offer real-time shared access to data through the cloud.

Hassan said a combination of old telephone lines, a single sea cable connection, and lack of fiber-optic lines has contributed to the poor service in Pakistan. His finance department has tried to mitigate the problem by using multiple service providers and a plug-in Wi-Fi service as an alternative when the mainline ISP isn’t working.

“Servers locally sited in tropical or developing countries mean that there is a higher risk of failure due to weather, heat, lack of maintenance – even insects,” Pannett said. “Lack of a stable power supply can be an issue, so self-powered units are an advantage.”

Using applications while offline, then syncing the data to the cloud once a connection returns, is another option, Pannett said.

Prevent power interruptions. Use portable servers instead of fixed servers if power outages are an issue. Depending on the size of your operation, these can cost from a few hundred dollars to several thousands.

Know before you go. Research any new region before starting operations there or making acquisitions, and factor in any costs related to slower or unreliable internet connections, from the effect on productivity to any extra hardware required.

Check the average internet connection speed before you choose a location for an operation. And don’t forget that rural locations may score lower than the national average, and there may be a disparity between mobile and fixed-line speeds in many countries.

Beth McLoughlin is a Brazil-based contributor to CGMA Magazine, a publication of the Association of International Certified Professional Accountants, which offers the Chartered Global Management Accountant (CGMA) professional designation. The association is a joint venture of AICPA in the US and CIMA in the UK. Click here to subscribe to the weekly newsletter CGMA Magazine Update.