Cognitive Technologies: Why CFOs Should Peer Past the Myths 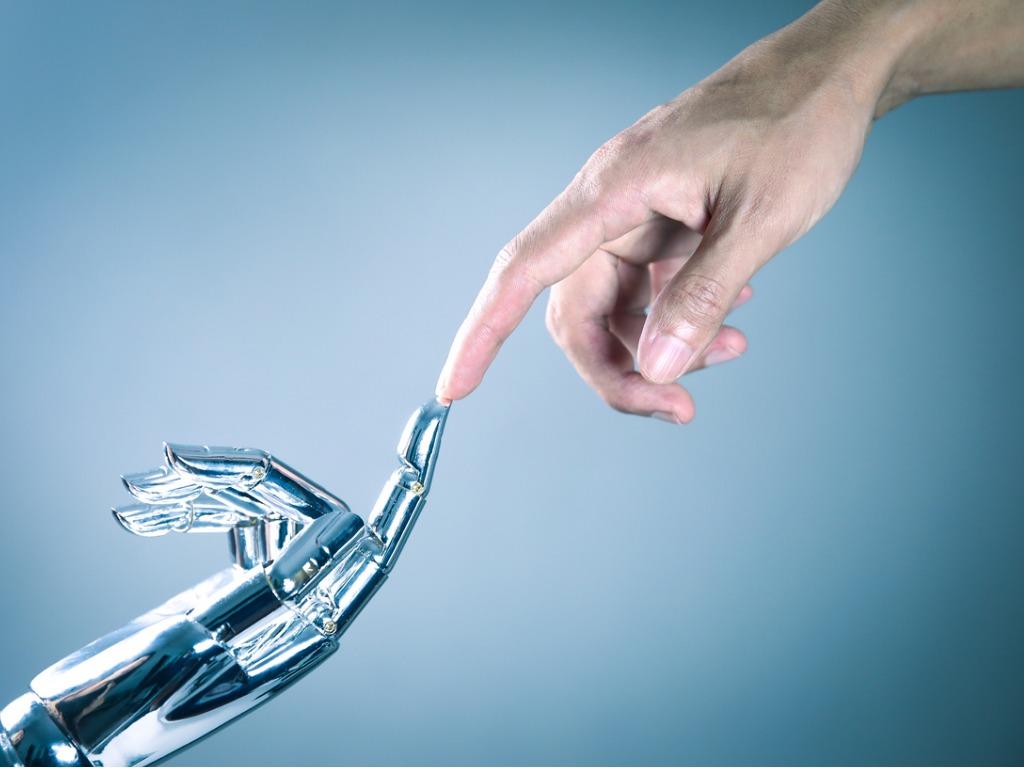 Cognitive technologies are transforming everything from customer experience to product development, and augmenting or replacing human activity in everything from manufacturing to operations to human resources. They are also beginning to reshape finance – emphasis on the “beginning.”

In the Q3 2017 CFO Signals survey, only 42% of responding CFOs said their finance team is knowledgeable about emerging technologies, including cognitive. Moreover, only about one-third of CFOs in the same survey said they have moved beyond the pilot stage with these technologies to transform their finance function.

Why the hesitation? Could some of it be related to the myths around cognitive that seem to be as pervasive as the technologies themselves?

When ranking the benefits of AI, cutting jobs through automation is at the bottom of the list for our respondents. Enhancing products or creating new ones and making better decisions rank higher

To find out, Deloitte’s recent State of Cognitive Survey asked 250 “cognitive-aware” US executives from large companies about the current state of cognitive technology within organizations. These managers were knowledgeable about artificial intelligence (AI)/cognitive technologies and informed about what their companies were doing with the technologies.

They also were well-versed in the misconceptions about the technologies – misconceptions that may explain why finance may be holding back. In this issue of CFO Insights, we discuss five common myths that cognitive-aware executives have dispelled.

The bottom line? Cognitive technologies can be deployed now to address a wide a range of finance challenges.

Myth #1: The main use of cognitive technologies is automating work that people do

It is rare to find a story in the media about AI that doesn’t speculate about how the technology is destined to put lots of people out of work. (See Myth #2.) This is because it is widely assumed that AI is all about automating the work that people do.

But this is hardly the full story. As our prior research has shown, and the survey has validated, there are significant uses for AI that do not involve substituting machine labor for human labor.

Product applications, for instance, embed cognitive technologies into products or services to help provide a better experience for the end user, whether by enabling “intelligent” behavior, a more natural interface (such as natural language text or voice), or by automating some of the steps a user normally performs.

Process applications use cognitive technology to enhance, scale, or automate business processes. This might entail automating work that people were doing; but it also might involve doing new work that wasn’t practical to do without AI.

And insight applications use AI technology, such as machine learning and computer vision, to analyze data in order to reveal patterns, make predictions, and guide more effective actions. Again, in some cases this can be used to automate human work. But it is also used to do work that no human could have done previously because the analysis was impractical without the use of AI.

Survey respondents clearly believe that AI is important for more than automation. While 93% said its use was important or very important in their internal business processes, 88% ranked it of similar importance to the products and services they sell.

And, when ranking the benefits of AI, cutting jobs through automation is at the bottom of the list for our respondents. Enhancing products or creating new ones and making better decisions rank higher. The research shows that AI is about far more than automating work that people do.

It’s widely argued that cognitive technologies bring about automation-related job losses. Entire books have been written about this notion. While it’s impossible to know what will happen in the distant future with regard to this issue, both the objectives and the predictions of the survey respondents suggest that job loss won’t be a major implication of cognitive technologies.

Among the benefits of cognitive technologies that respondents viewed for their companies, the benefit of “reduce headcount through automation” was selected less than any other choice from a list of nine alternatives. Only 7% of respondents selected it as their first choice in benefits, and only 22% chose it among their top three benefit choices.

These results suggest that cognitive-aware managers aren’t even aspiring to automation-driven job loss. When asked what they believe about the likelihood of job loss in the future, the respondents were similarly positive about the prospects for human workers.

They were queried about job-oriented futures three, five, and 10 years from now (see chart below). Just over half of the respondents expect that augmentation—smart machines and humans working alongside each other – would be the most likely future three years from now.

How will cognitive technologies affect jobs? 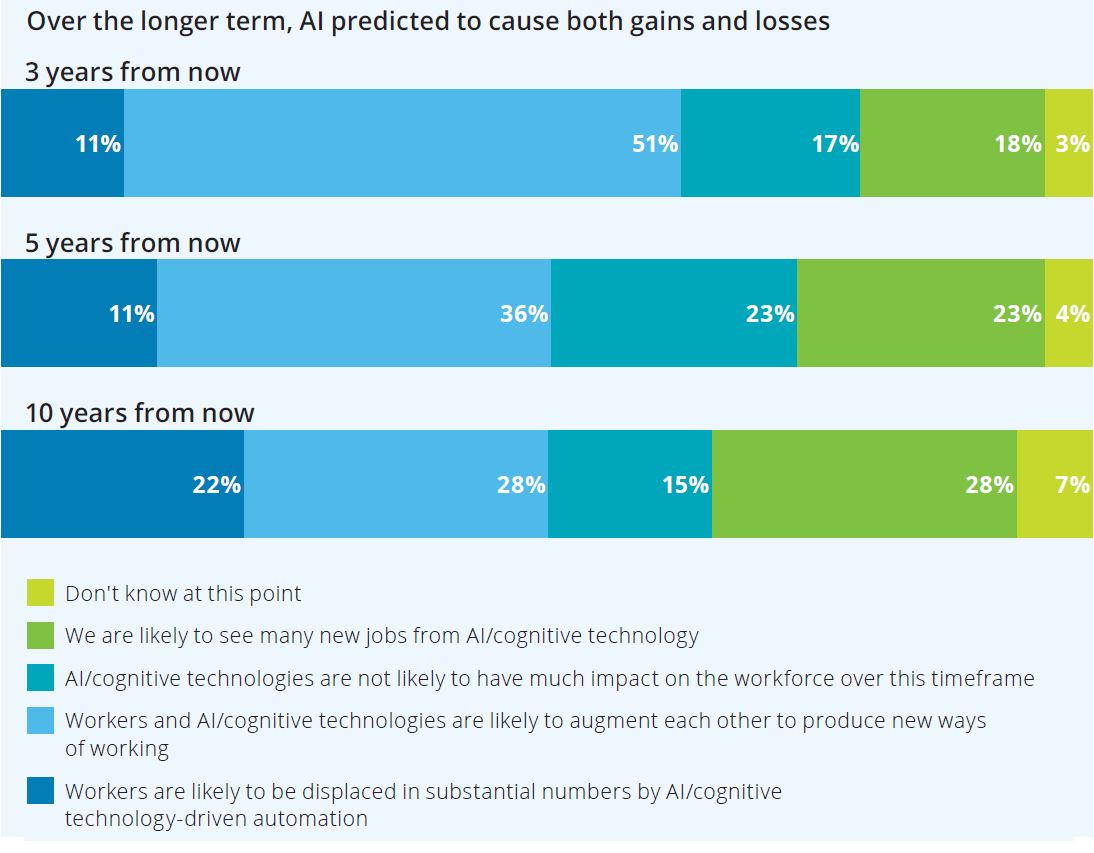 Only 11% expected substantial job displacement from cognitive technologies. A larger percentage expected that there would be job gains, or at least no substantial impact on jobs.

Respondents are more likely to be concerned about substantial job loss when it comes to the 10-years-from-now scenario. Twenty-two percent expect it to happen, but 28% still expect augmentation to be the most likely outcome, and the same percentage anticipate new jobs.

In short, while respondents had some concerns about automation-related job loss, they considered it less likely than several other positive outcomes. These cognitive-aware managers understand both their organizations and cognitive technologies; so they are well-equipped to make relatively accurate predictions about jobs in the future.

Myth #3: The financial benefits of cognitive are far down the road

For all the hype surrounding AI, many people still view it as a futuristic technology. They see a handful of tech giants making headlines with high- profile applications, but believe typical companies will not be able to achieve real financial benefits from using the technology in the near term.

There is some truth to this view: The tech giants are indeed at the forefront of AI R&D and have capabilities not available to typical companies. On the other hand, there are ordinary companies in every industry that have deployed AI and have already reaped financial benefits from doing so. The survey bears this out.

The survey suggests that the economic benefits of AI increase with experience. The more AI deployments respondents reported, the higher the percentage who said they had realized economic benefits

This is not to suggest that any AI project has a high probability of yielding a positive return on investment. The technology is still relatively immature, and some project failures are to be expected, particularly when applications are novel or the technology untested.

It’s worth noting that IT projects generally are not immune to failure. A recent study estimated that 14% of projects are deemed failures. Still, the data suggests that the benefits of AI are in the here and now – for companies that invest.

Myth #4: AI is overhyped and is about to disappoint us

This one, we admit is subjective. There is no question that AI is one of the technology topics about which there is the most buzz. And it does sometimes seem that the key to raising venture capital these days is to include the terms “AI” or “machine learning” in your investor pitch.

But is AI overhyped? Many of the survey respondents – and recall, they work at companies that are deploying the technology – don’t think so. Just 9% say they think AI is overhyped; 10%, in fact, say that the technology is under-hyped.

And more than a third – 37% – believe that AI is fundamentally different from IT, suggesting they believe at least a lot of the excitement surrounding the technology is warranted.

Myth #5: Cognitive technology is only about transformational change

It’s not uncommon to hear cognitive technology projects equated with “moon shots” – highly ambitious, transformational change initiatives. The same projects are also often referred to as disruptive to companies and industries. A manager might assume that cognitive projects that don’t transform their companies are not worth undertaking.

A substantial percentage of respondents (47%) do agree that “it is important to strive for large-scale, transformational change with cognitive technologies.” But 52% believe either that it is better to “pick the low hanging fruit” (40%) or wait a few years until the technology matures (12%).

The fact that a majority of respondents believe that something other than transformational change is a reasonable objective suggests that managers can justifiably consider alternatives to transformation.

We believe that companies that have successfully achieved transformation from other technologies should consider pursuing it with cognitive technologies as well. However, any transformational project is likely to face high risks and expense.

Multiple less ambitious projects – particularly when focused on a specific business process goal – can be more likely to succeed and may in combination yield transformational outcomes.

As noted, the fact that the survey respondents don’t agree with the myths doesn’t necessarily mean that they won’t ever come true. Particularly with regard to future predictions, no one really knows how cognitive technologies will affect our work and lives.

But the fact that 250 managers who are knowledgeable and experienced with cognitive technologies do not support (in aggregate, anyway) these myths certainly casts doubt on their veracity.

At the very least, the respondent views suggest that all managers – including those in finance – should maintain an open mind about the potential and actual impact of these powerful technologies.