CFOs: Would this be Your Firm’s Next Destination for Innovations? 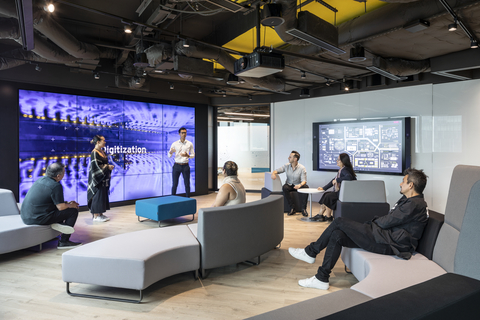 Now Wong Chuk Hang—part of Southern Hong Kong Island—is reachable by the subway and EY has picked this location to house its wavespace.

Declining to disclose the rental cost of the Hong Kong facility, the big four company had its official wavespace launch on Thursday—the fourth of such facility in Asia Pacific—bringing the total number of EY wavespace to 19 globally.

The other three EY wavespace facilities in the region are located in Singapore, Sydney, and Shanghai. According to the company, blockchain is the focus technology of the 5000-sq feet Hong Kong facility which allows customers to collaborate real-time with others in different locations of EY wavespace.

The Hong Kong facility is supported by a core team of 10 specialists including experience designers and technologists, said EY. Three of them include: Inaki Amate, EY head of design for Asia-Pacific and head of digital for greater china, Thierry Halbroth, Asia Pacific advisory creative lead, and Dwayne Serjeant, executive director of experience design.

EY Professionals from different locations of the wavespace network have developed more than 50 business processes enabled by blockchain for customers in the financial services sector including an identity management platform for customer onboarding and helped an automotive OEM develop new mobility services including premium and on-demand taxi services, smart parking and ride-sharing, the firm noted.

More to come in Asia Pacific

There might be three to four more such facilities in the pipeline in the region, said Winter, adding that possible locations include cities in South Korea, ASEAN, and China.

The EY wavespace is part of the firm’s US$1 billion investment announced in August in new technology solutions, client services, innovation and the EY ecosystem over the next two financial years.

EY’s technology spending reaches more than US$1 billion a year, said the company earlier in a statement, adding that part of the investment will be used to fund acquisitions.

KPMG set up its Digital Village in Singapore in 2016, now having 11 such facilities globally to provide access to disruptive technologies and expertise, the firm said in a statement.

PwC launched its Experience Centers in late 2015 and now has more than 30 similar facilities.

The big four’s increasing focus on innovation and technology reflects the fact that their advisory services grow at a much faster rate than more traditional services such as audit.

At Deloitte—by far the largest big four in terms of FY 2018 revenues—has experienced the same trend, with its consulting revenue growing the fastest at 15.7% which is much higher than audit’s 7.7%.