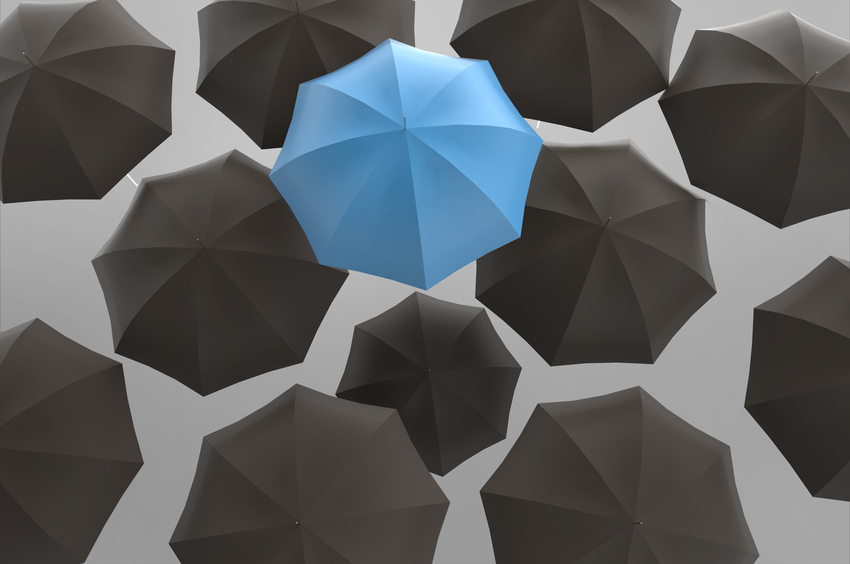 Eagle-eyed readers will notice that Sing Hong Fung, the second-highest paid finance leader in Asia in 2015 (total compensation: US$6.6 million), is nowhere to be found in the 2016 list of the region’s best paid CFOs. That’s because he has been elevated to CEO of the Hong Kong-listed integrated logistics and trade centers company. His replacement, Tsoi Yiu Ting, became CFO in May.

You won’t see National Australia Bank’s Craig Drummond, No. 4 last year (US$5.9 million), in this year’s list either. He resigned from the bank in February and was replaced by his deputy, Gary Lennon. Drummond said he joined the bank in 2014 thinking he had a chance to become CEO, but had apparently concluded this is no longer the case. He is now CEO of health insurance provider Medibank Private.

This is the first time that a woman topped the CFO compensation league table. Two other women were ranked No. 7 and No. 27, respectively

There’s a lot of movement in this year’s list of Asia’s Millionaire CFOs and promotion is one of the reasons. Shayne Cary Elliott, No. 10 last year (US$4.1 million), became CEO of Australia & New Zealand Banking Group in January, while No. 28 Gordon Naylor of Australian specialty biotherapeutics company CSL (US$2.5 million), was named head of CSL’s new global influenza vaccine business in 2015. David Lamont is the new CFO.

It only reconfirms that finance is one of the best launching pads for the top job, as Indra Nooyi of PepsiCo, Scott Davis of logistics giant UPS, Joe Kaeser of Germany’s Siemens AG and Gregory Hayes of United Technologies have shown in recent years.

Out of the Best-Paid CFO List: Where Are They Now? 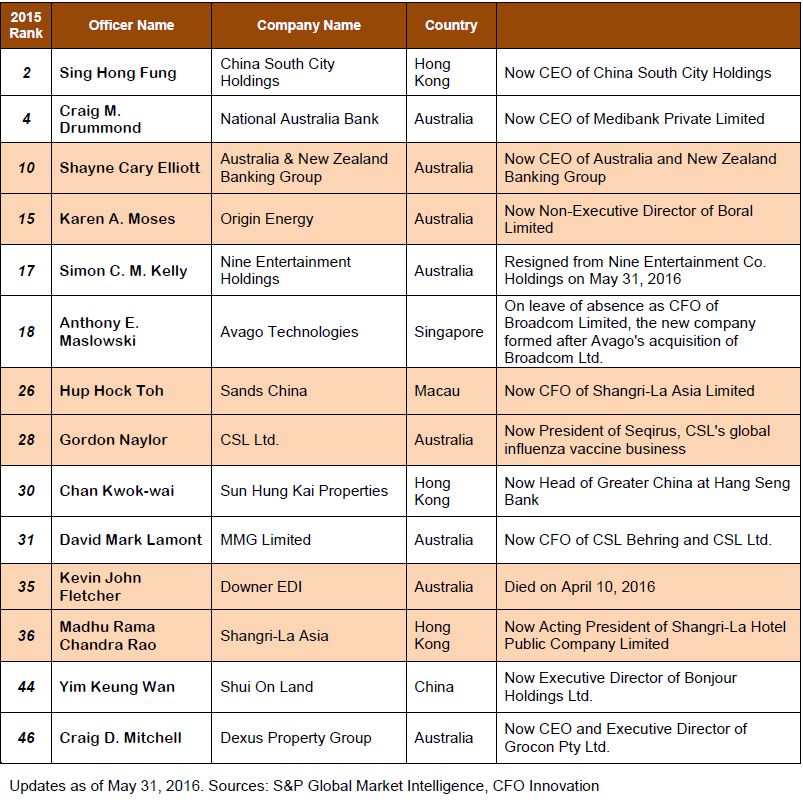 And Asia Pacific’s highest paid CFO is . . . Chor Woon Yu (also known as Carol Yu) of Chinese Internet company Sohu.com. According to S&P Global Market Intelligence, which compiled the list for CFO Innovation, she was paid the equivalent of US$9.7 million in 2015 – up 84% from the previous year, on the back of stock awards valued at US$6.9 million.

This is the first time that a woman topped the CFO compensation league table. Another woman, Hon Hing Hui (also known as Susanna Hui), is No. 7 as Group CFO of Hong Kong telco PCCW (US$4.2 million) and also No. 20 as Group CFO of HKT Trust and HKT Limited (US$2.6 million), which is majority owned by PCCW. Combining her compensation for the two jobs effectively places her second to Yu in the league table.

But the long-standing gender imbalance in the top ranks of Asia’s CFOs remains, particularly with the retirement of Australia’s Karen Moses in May – she was previously CFO of Origin Energy and ranked No. 15 last year. (Gary Mallett is currently Acting CFO.) There are only three women in this year’s list, with Xiaoyan Sun of China’s GF Securities joining Yu and Hui at No. 27 (US$1.99 million).

The picture next year may change gender-wise now that the 54-year-old Yu has announced her retirement. But her successor at Sohu.com is another woman, Joanna Lv, who has been named Acting Chief Financial Officer. 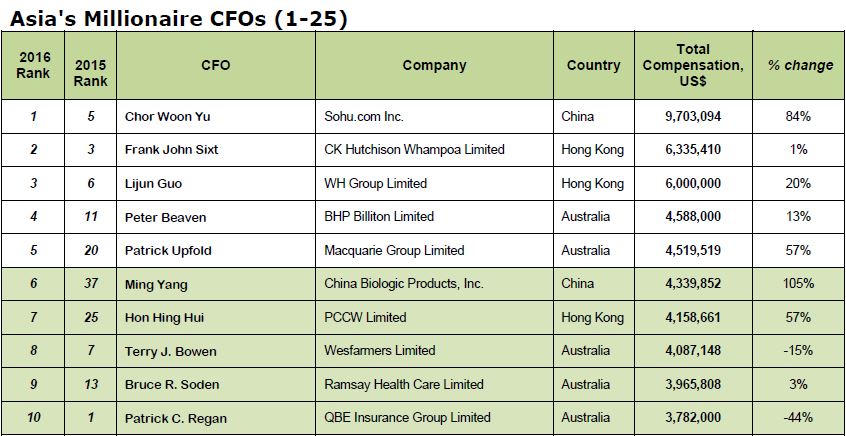 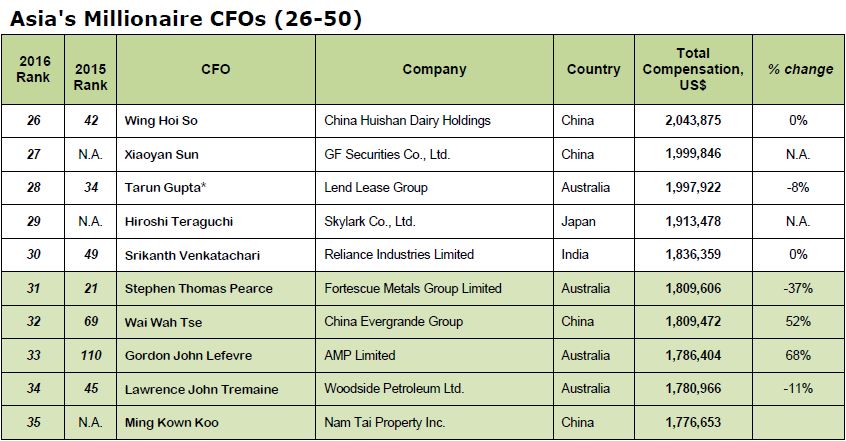 The Australians dominate the league table, in part because regulators in Australia require named disclosure of top executive compensation, something that counterparts in jurisdictions like Japan, Singapore and South Korea encourage but do not require. 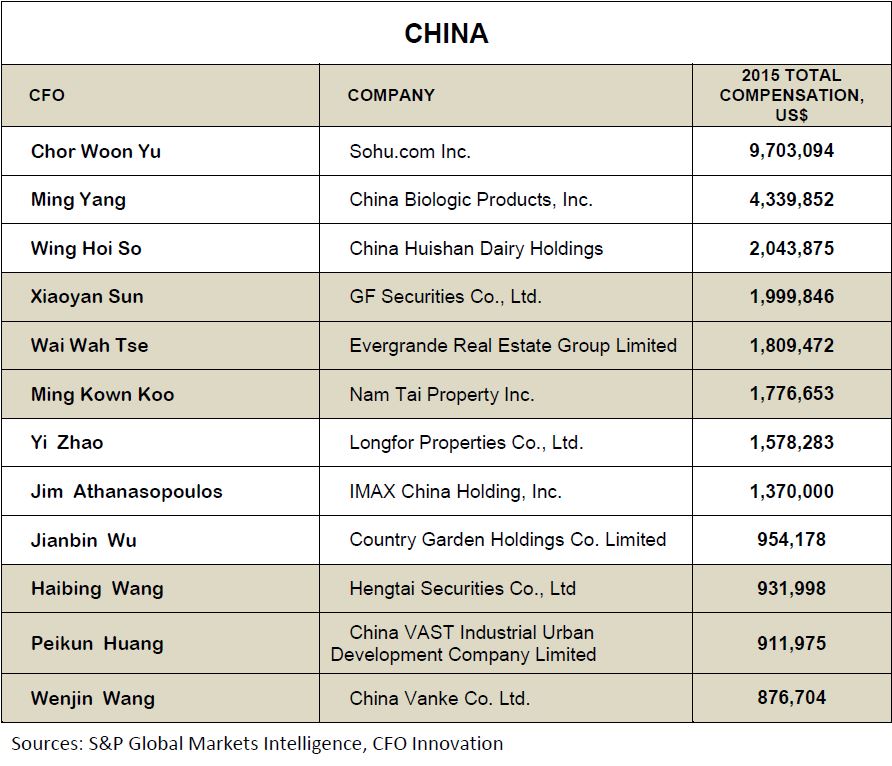 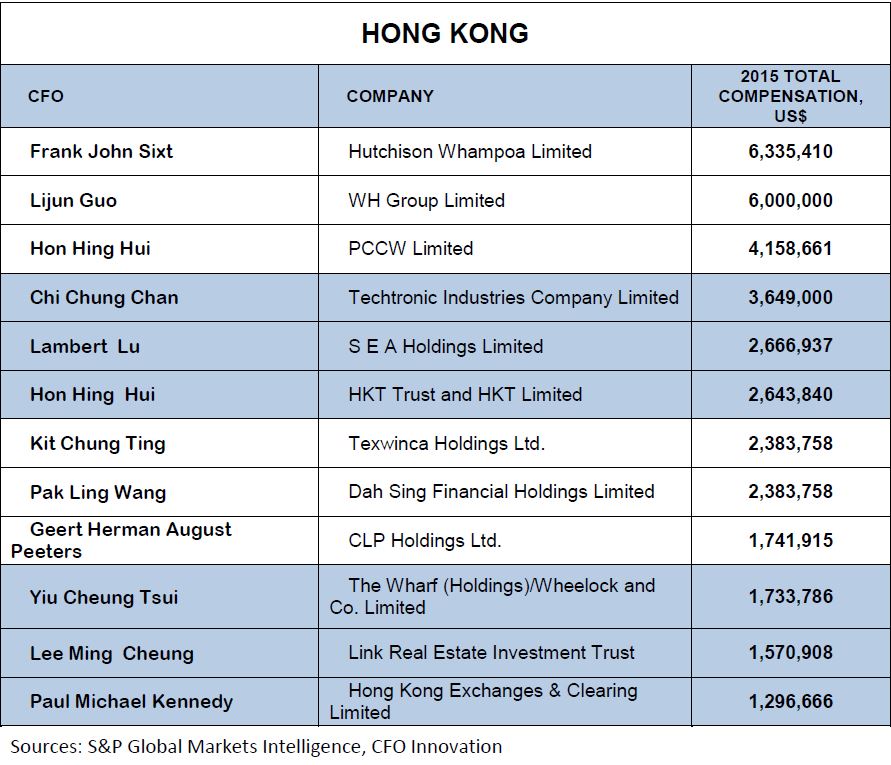 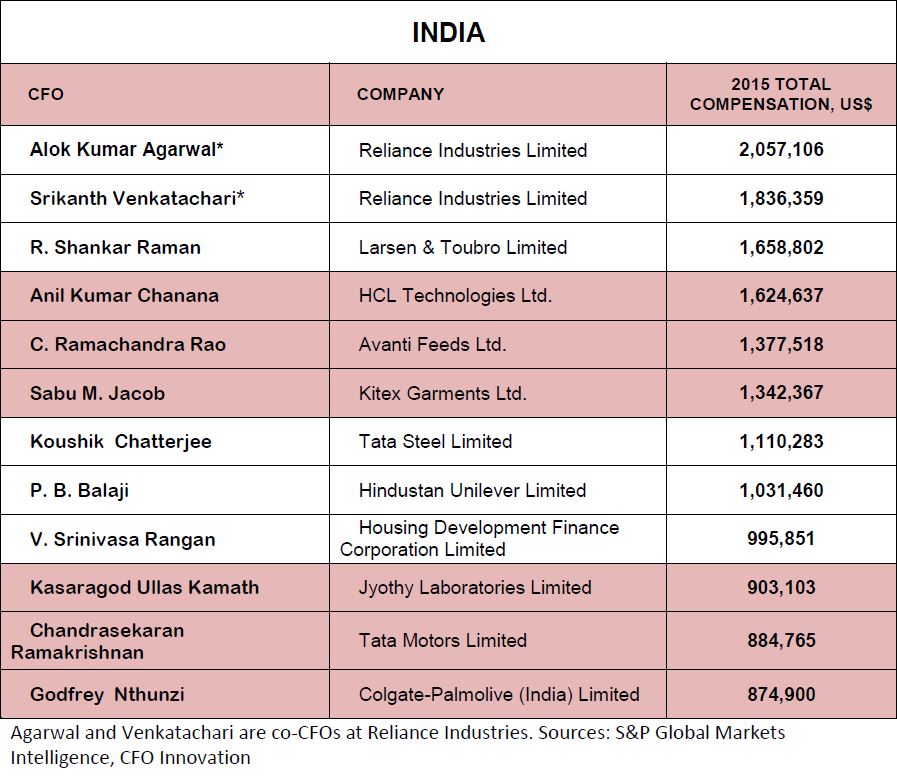 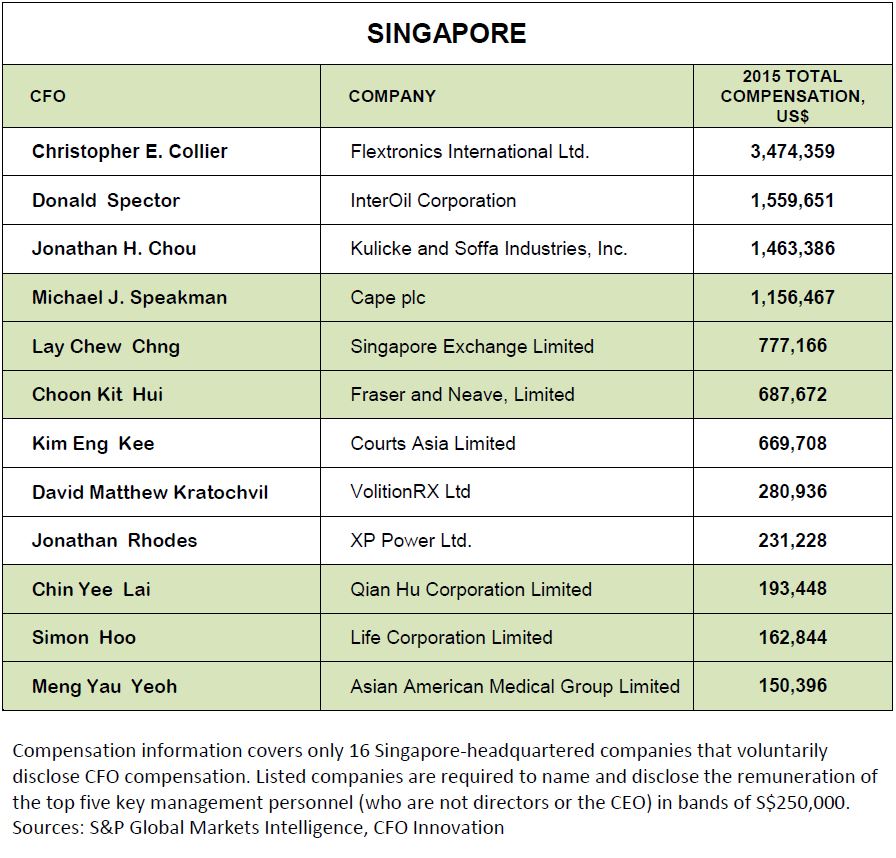 How to become a millionaire

So what can finance professionals learn from this year’s ranking?

For a CFO, the road to the top seems straighter and clearer of weeds than ever. Even if the path to the CEO post in your organization is blocked, other companies may be happy to have a CFO as CEO, as Australia’s Drummond discovered. If you want to be CEO, continue to aspire and works toward that goal.

One reason why last year’s best paid CFO, QBE Insurance’s Patrick Regan, fell to No. 44 this year is the smaller value of his stock award, at US$2.1 million versus US$3 million in 2015

Gender is obviously still a disadvantage, despite the rise of women CFOs like Sohu.com’s Yu. But with talent, perseverance and luck, this barrier is not insurmountable. Yu had been indefatigable, concurrently taking on the posts of Sohu.com President, Principal Accounting Officer and CEO of subsidiary Changyou.com.

Indeed, regardless of gender, one key to becoming a CFO millionaire is the willingness to take on multiple roles and responsibilities, as we have previously observed. The second-ranked CFO in this year’s list, Frank John Sixt of Hong Kong’s CK Hutchison Holdings, is Group CFO, Deputy Managing Director and Executive Director.

As in previous lists, stock and option awards can be exceedingly rewarding. Yu’s salary was just US$392,157, which is lower than second-ranked Sixt’s US$605,154 salary and the US$1 million of both Guo Lijun of WH Group and Peter Beaven of BHP Billiton. But Yu’s option awards came in at US$6.9 million, while Sixt and Beaven had none (although they got a bonus of US$5.6 million and 1.3 million, respectively; Yu did not get a performance bonus).

The interplay of salary, option and stock awards and performance bonus is an important factor for CFOs to consider when negotiating their compensation package. In this and previous rankings, the most stable component is the annual salary; the value of stock and option awards fluctuates wildly.

One reason why last year’s best paid CFO, QBE Insurance’s Patrick Regan, fell to No. 44 this year is the smaller value of his stock award, at US$2.1 million versus US$3 million in 2015. (His total compensation is down minus-44% in this year’s list.) So think long and hard before agreeing to replace a portion of your salary with option and stock awards.

The country where you are based, the size of the company, and the industry where it operates obviously have a bearing on compensation. Australia dominates the list of best-paid CFOs, with China and Hong Kong having a strong presence (but bear in mind that CFOs in Japan, Singapore and South Korea are not required to publicly report their compensation).

Financial services, telecommunications and Internet businesses are among the lucrative sectors, along with, surprisingly, commodities (the fall in the price of oil, energy and resources may not have yet fed into CFO compensation). In terms of company size, conglomerates and multinationals obviously need to pay more than smaller enterprises, given the geographical reach and complexity of their business.

If you’re a woman, you can expect the route to the top to be more challenging. But as the three women in this year’s list suggest, gender these days may no longer automatically disqualify a CFO from being awarded rich packages.