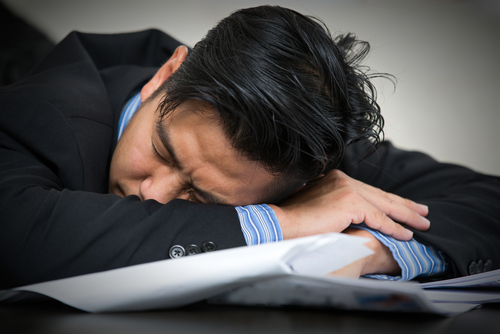 It’s a truism in business that every CFO knows or should know. The more engaged the members of the work team are – the more passionate they are about their job and the stronger their connection to the company – the more productive and innovative they are.
But according to the latest Gallup study, State of the Global Workplace, such engaged workers may be rare in Asia. The global pollster surveyed more than 225,000 employees in 142 countries in 2011 and 2012. It found that East Asia, which includes China, Hong Kong and Japan, lays claim to the world’s lowest proportion of engaged employees, at 6% – less than half the global average of 13%.
So if the finance function is staffed by 17 people, the chances are that only one of them can be said to be engaged. In Gallup’s parlance, that means that someone is “involved in, enthusiastic about, and committed to their work and contributes to the organization in a positive manner.” The other 16 are either disengaged (performs their role but are not emotionally connected) or worse, actively disengaged (hates their job and wants others to hate theirs too).
At 12%, engagement is higher in Southeast Asia, led by the Philippines (29%), Thailand (14%) and Malaysia (11%). But there are fewer engaged employees in Singapore (9%) and in Indonesia (8%). In contrast, Australia and New Zealand have a 24% showing, one of the highest in the world, alongside the US (30%).
The good news is that it is possible to increase the level of engagement, says Vibhas Ratanjee, Asia Pacific practice leader for Gallup. The key is to focus on managers. Great managers drive engagement on several levels, including building trust by displaying care and concern for their people. Poor managers do the opposite, and contribute to active disengagement.
Engagement and achievement
Does being engaged or actively disengaged really matter in the first place? Gallup says engagement makes a difference to the bottom line. Companies with higher levels of engagement, as measured by employee responses to Gallup and other surveys, have significantly higher productivity, profitability and customer ratings, lower turnover and absenteeism, and fewer safety incidents.
This conclusion is backstopped by Gallup’s analysis since 1996 of a database containing more than 25 million respondents from 2.8 million workgroups and 1,110 clients in 195 countries and 16 major industries. In the latest analysis, it found that clients with an average of 9.3 engaged employees for every actively disengaged employee experience 147% higher earnings per share compared with their competition in 2011 and 2012.
In contrast, those with an average of 2.6 engaged employees for every actively disengaged employee experienced 2% lower earnings per share compared with their competition in the same period.
“Active disengagement is an immense drain on economies throughout the world,” says Gallup. It estimates that active disengagement costs US companies US$450 billion to US$550 billion annually in lost output. In the United Kingdom, between £52 billion and £70 billion is lost due to actively disengaged employees.
The chart below shows the median differences between those workplace teams that are in the top and bottom quartiles in terms of engagement. “Those scoring in the top half on employee engagement nearly doubled their odds of success compared with those in the bottom half,” says Gallup. “Those at the 99th percentile had four times the success rate of those at the first percentile.”
Engagement’s Effect on Key Performance Indicators
Median differences between top- and bottom-quartile teams 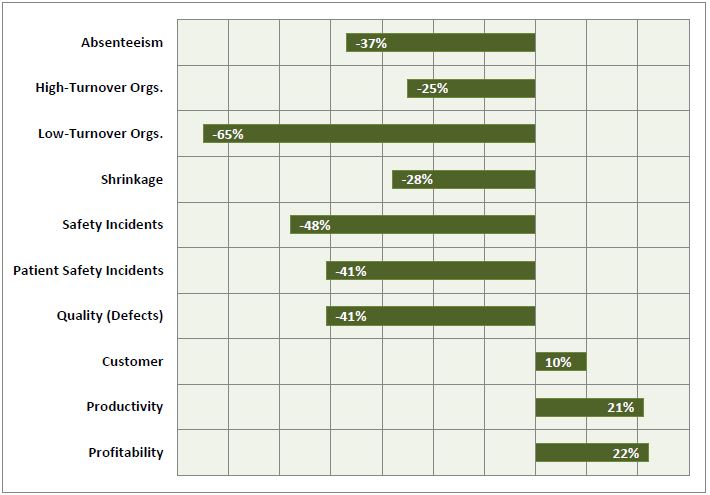 Source: State of the Global Workplace
Measuring passion
How do you know whether an employee is engaged, disengaged or actively disengaged? Gallup asks questions such as whether the employee smiled or laughed a lot yesterday, learned or did something interesting, and experienced stress or anger.
It also asks employees to respond to 12 statements that it says have proven links to performance outcomes. According to the pollster, the yes-no responses to the following statements are “the best predictors of employee and workgroup performance,” based on research that goes back to the 1990s:
Primary needs

Connection to the team

Desire to improve and innovate

“The 12 items represents the four stages of a hierarchy that an employee that an employee goes through on the path to complete engagement,” Gallup explains. “Items 1 and 2 represent employees’ primary needs. When employees start a new role, their needs are basic. They ask, ‘What do I get from this role?’”
Statements 3 to 6 represent the second stage, when employees begin to think about their own individual contributions and how others value their efforts. “Manager support is most important here because managers typically define perceptions of value,” reckons Gallup.
Statements 7 to 10 encompass the third stage, when employees broaden their perspective and look at their connection to the team and the organization as a whole. “Then, during the fourth and most advanced stage, composed of items 11 and 12, employees want to make improvements, learn, grow, innovate, and apply their new ideas.”
Applied to a specific work team, “these four stages help managers evaluate workgroup performance and concentrate their efforts on areas most relevant to where their team is on the journey to complete engagement,” suggests Gallup.
It is not a bad idea for the CFO to ask finance team members to answer yes or no to these 12 statements to see where they are in the engagement journey. The exercise should be done anonymously to encourage honesty. The results could help the CFO plan how to raise the level of engagement in his or her team.
Engagement by country
Aggregating the responses, Gallup has been able to build a picture of employee engagement at the country level. The table below shows engagement levels in 2011 and 2012 for selected Asian countries:
Asia’s Most and Least Engaged Employees 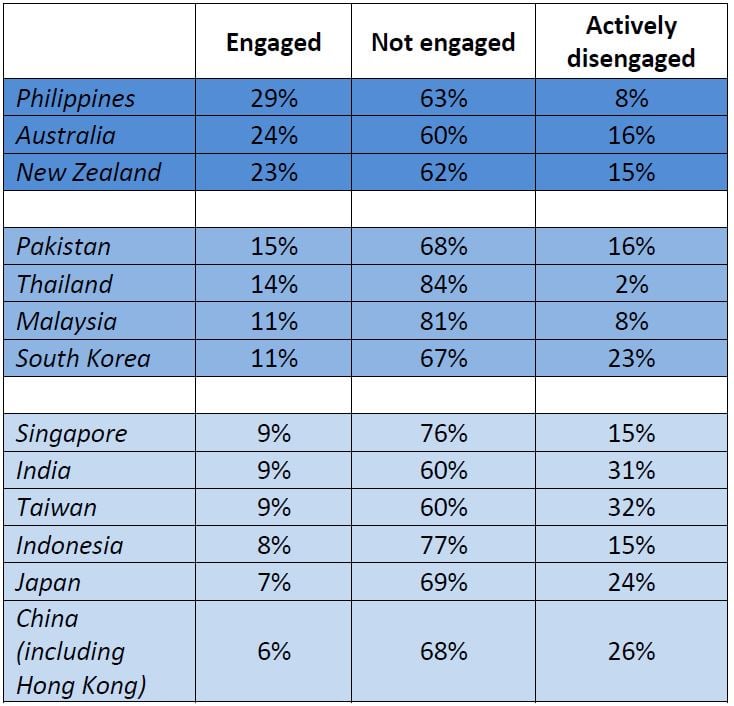 Source: State of the Global Workplace
Emotional elements within each country’s culture could explain the higher levels of job commitment observed in the Philippines and Thailand, says Gallup’s Ratanjee. Asia’s less than stellar showing on the whole, particularly in China, could also be attributed to cultural mindsets with regard to jobs.
“In Asia, pay and status are big determinants behind the decision to take up a job and less consideration is paid to whether the individual will enjoy the work,” he says, adding the same can be said for promotions. Workers in Asia tend to accept a new position more for the monetary rewards and status elevation, versus interest in the job per se.
The Gallup study found the Middle East and North Africa region to have the highest levels of active disengagement in the world, particularly in Tunisia (54%,) Algeria (53%) and Syria (45%). According to the pollster, high unemployment rates likely contributed to these dismal results, as many disengaged workers would be inclined to remain in their jobs despite unhappiness at work.
At 31%, India’s level of active disengagement is the highest in Asia. This mainly reflects active disengagement in construction and mining (44%) and manufacturing and production (32%). Among professional, managerial and administrative job types, active disengagement is only at 10% to 12%.
Active disengagement is lower in China (including Hong Kong) at 26%, though that is still higher than in Japan (24%), Indonesia and Singapore (both 15%), Malaysia and the Philippines (both 8%) and Thailand (2%). Unlike in India, the proportion of professional workers and managers and executives in China and Hong Kong who hate their job is high at 20%, implying that active disengagement among finance professionals is high as well.
Enhancing engagement
Can the toxic situation be improved? Doubling current engagement levels is possible, says Ratanjee, even in cultures where feelings are not as strong a cultural trait as they are in the Philippines and Thailand, for example.
An important element to achieving this lies with the candidate selected as manager. Great managers drive employee engagement, says Ratanjee. Firstly, they build trust and strengthen relationships by displaying care and concern for their people. Secondly, they encourage performance due to their ability to individually motivate employees. Thirdly, they recognize employee talents and are capable of placing team members in tasks that will use their strengths.
All too often, however, the wrong candidates get selected for managerial roles.  A separate Gallup study of managers in Southeast Asia found that most respondents feel they had come into their roles ‘by accident’. Says Ratanjee: “It takes three months to find out that the person you’ve named as manager is the wrong fit for the job, but it may take three years to deal with the consequences.”
Many people in managerial positions have come into their current roles due to stellar performance at non-managerial roles, and this scenario, while common, is less than ideal. Ratanjee cites the example of disengaged software developer managers in India who had come into their roles because they had excelled at a non-managerial role, such as code writing.
This resulted in managers whose talents and interests lay more in writing code than managing people; ironically, a celebration of these workers’ success resulted in taking them away from what they liked doing. “Talent is something you won’t find on a resume,” says Ratanjee, who recommends management jobs should be treated as unique roles with distinct skillset demands, rather than dangled as promotional prizes for career paths.
The Gallup report has other recommendations:
Focus on employee selection. “Generally speaking, employees’ perceptions of their primary manager influence about 70% of their engagement, while coworkers’ attitudes and other factors account for the remaining 30%,” says Gallup. In recruitment, companies should thus also look at the candidate’s ability to act as catalyst to build engaged work teams, in addition to their technical, leadership, communications and other skills.
Utilize strengths-based intervention. “Trying to get employees to fix their weaknesses doesn’t work,” says Gallup Chairman and CEO Jim Clifton. “Weaknesses can’t be developed much at all – but employees’ strengths can be developed infinitely.” Companies should help managers and employees discover their strengths, align their greatest talents with the expectations and demands of their roles, find ways to apply strengths in a team setting, incorporate strengths into performance reviews, and create a community of strengths champions as internal experts to help everyone use his or her strengths.
Coach managers and hold them accountable for their employees’ engagement. Companies should train managers on engagement issues and make sure they build engagement plans with their team members, track their progress and continuously focus on emotionally engaging them. Employee engagement should be part of the managers’ formal review and a criterion for promotion.
Define engagement goals in realistic, everyday terms. “Ensure that managers discuss employee engagement elements at weekly meetings and in one-on-one sessions with employees to weave engagement into daily interactions and activities related to their performance objectives,” says Gallup.
Find ways to meet employees where they are. Cultural influences and economic conditions as well as more specific variables such as job type and education level play roles in shaping workplace experience. “Managers should be aware of the factors most relevant to engagement among their workers,” says Gallup. “They should also understand that every interaction with an employee has the potential to influence his or her engagement and inspire discretionary effort.”
About the Author