Severance: When You Need to Fire -- Or Get Fired 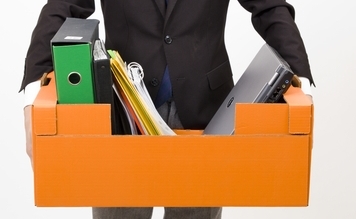 Issues such as the amount of remuneration for employees have traditionally taken the spotlight in Asia. The higher-than-usual clicks on our recent article on finance pay in 2014 provide proof of that. Little has been said about the flipside – the quantum of separation compensation and other severance practices in the region.
Yet severance is a critical component of an effective global workforce strategy. Understanding severance trends can help finance departments avoid potentially costly litigation, deliver on business objectives, and assist HR in managing talent fluctuations.
This seldom discussed aspect of financial management also greatly affects the company’s image in the eyes of the public and current and potential employees, says Frank Ribuot, senior VP for APAC and global talent management at HR consultancy group Right Management.
And, of course, for the CFO and other executives, knowing (and helping set) severance policies will help in decision-making with regard to who to fire or persuade to take voluntary separation – and in making the decision themselves as to whether they should accept the company’s offer for them to leave and how to negotiate the best severance package.
All that said, “we should not make the issue out to be bigger than what it is,” warns Ribout. “If a company wants to achieve the image of a caring employer, severance policies should form just one piece of the puzzle.”
How much to expect
Research conducted by Right Management has shown that 75% of companies possess a formal, written severance benefits policy. The 2013 study, which set out to determine benchmarks for employee and executive termination and severance practices across the globe, surveyed more than 1,800 senior business leaders and HR professionals in 19 countries, including 528 executives in Australia, China, Hong Kong, India, Japan and Singapore.
Cutting to the chase, what severance can the CFO and other top executives expect when they are involuntarily separated, as Right Management describes those who are asked to leave the company because of restructuring, poor financial performance and other reasons?
The global average is 3.48 weeks per year of service (see chart below). If you are in China, you can expect much more – 4.24 weeks, according to the survey. If you’re in Hong Kong, not so much, at 3.1 weeks.
Of course, the actual quantum depends on what your compensation is. Assuming you’ve been with the company for ten years and using 2014 CFO salaries provided by executive recruiter Hays, an MNC CFO earning RMB1 million (US$164,000) a year would  get RMB815,385 in severance, or US$133,723.
According to Hays, an MNC CFO in Hong Kong could earn HK$1.4 million (US$180,000) a year, not counting bonuses and other remuneration. If that CFO is involuntarily separated, he or she could get severance of HK$834,615 or US$107,305 – 25% lower in US dollar terms than the peer in China.
What Severance Do Top Executives Earn?
Weeks per year of service 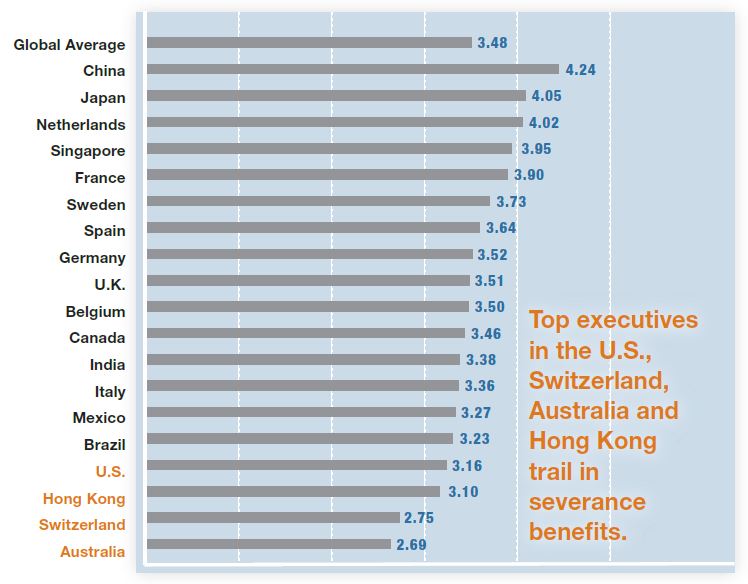 Executives involuntarily separated. Source: Right Management
In terms of compensation, is it better to leave voluntarily or to force the company to fire you for whatever reason? It depends on the jurisdiction. In Australia, the findings of the study suggest, top executives who leave when asked get a higher severance on average (3.04 weeks per year of service) than if they have to be forced to go (2.69 weeks).
The opposite is true in China. A top executive who leaves voluntarily gets 4.11 weeks per year of service, while those who are forced out get 4.24 weeks, 3% more. This is true of senior executives, department heads, managers, supervisors, professional staff and all other employees. China’s labor laws mandate the higher severance calculation.
The difference in severance payments between voluntary and involuntary separation is set out in the table below:
Leave or Get Fired?
Weeks of severance earned per year of service

Source: Right Management
Global and Asian practices
Perhaps unsurprisingly, Right Management found that severance practices vary by country and industry. Interestingly, companies in the Asia Pacific showed a noticeably higher incidence of formal policies (82%) compared with the Americas (73%) and Europe (72%).
Contrary to popular belief, neither leadership change nor the company’s poor performance is the key driver behind people being asked to leave or getting fired. In the Asia Pacific, restructuring of the organization is cited as the number one reason (61%), followed by reduction in the workforce (59%) and voluntary resignation (54%). Leadership change (23%) and poor company performance (33%) are minor drivers.
Reasons for Paying Severance

Source: Right Management
Other findings of the study include:
Equality and fairness
Severance policies in the Asia Pacific region have not changed by much over the years, says Ribout. What has changed appears to be the frequency at which amendments are made to existing policies. And while elements such as the amount of benefits being paid have stayed the same, the amount of outplacement support provided by companies has been reduced.
Firms have grown a lot more careful when investing in employee support, Ribout states. “Companies have taken into account the effects of technology and job placement networks available to people now.”
Authorities that help determine severance policy, including finance departments, should ask just what the company hopes to achieve from a CSR perspective when deciding on elements in severance packages. One important issue is the impact of the package on employees who have escaped being laid off.
“It is the survivors, the ones who get left behind, that a company stands to lose if severance packages are not generous,” says Ribout. “If you don’t treat laid-off employees well, their colleagues will know that they too, will likely not be fairly treated and leave for a competitor.”
Severance policies can be fairly flexible, although most companies adhere to a framework. Ribout cautions against allowing retrenched employees too much leeway. “Companies should always take equality and fairness into account; give employees too much flexibility and people might just abuse the system.”
For example, generic elements of a severance package could include a lump sum payment and outplacement benefits. Allowing retrenched employees to choose a cash benefit in lieu of outplacement support could prove detrimental in the long run as employees may realize they need outplacement help further down the road.
The operating country’s taxation laws should also feature in the severance package process. A one month severance payment to an employee in Australia could almost equate to two months’ worth of pay due to taxation benefits for laid off workers there. In Singapore, severance payments received by retrenched employees are also not taxed because they are classified as capital receipts.
According to Ribout, the severance package determining process is largely driven by labor laws in the operating country, with Australia, China and Japan being among the most regulated markets in the region.
Breaking the bad news
The time factor is a critical one for finance departments assisting in restructuring exercises. Ample time should be given to mentally prepare employees and managers for the possibility of restructuring, says Ribout. The most shocking aspect of retrenchment occurs when the news hits employees out of the blue.
“Lack of training on the part of managers communicating the bad news can severely damage the situation when it does not have to be so,” says Ribout. “Departments have to be prepared to manage change, and the damage will be minimized when employees are mentally prepared.”
Ribout recommends companies embark on a restructuring exercise at least three or four months in advance, so departments can know where and when they need to make changes.
About the Author