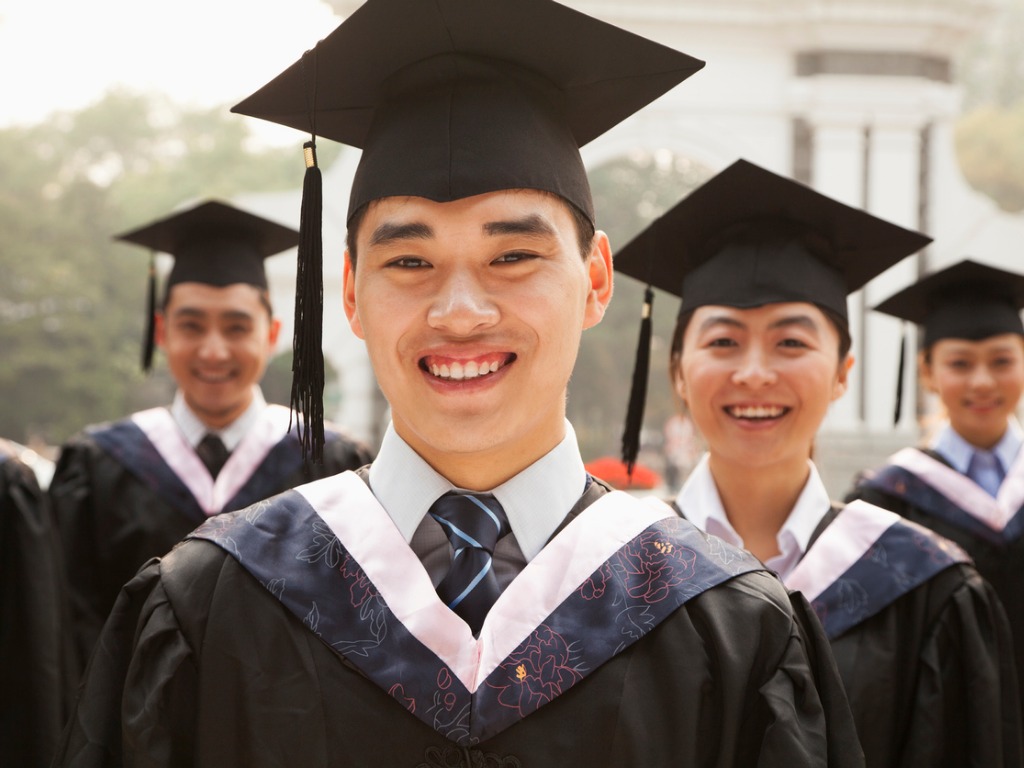 But when employers were asked to identify up to 10 domestic and 30 international institutions they consider excellent for the recruitment of graduates, the University of New South Wales is ranked only 12th. China’s Peking University is higher at No. 7 – even though it comes in at just 24th in the main ranking, tied with the University of Toronto.

And Fudan University, also in China, is ranked 22nd on employer reputation, even though it does not even figure in the top 50 in the main ranking.

Arguably, employer reputation may be a more useful tool for the CFO in deciding which universities to include in his or her recruitment drive, or as a supplementary data point when deciding which graduate is best suited to join the finance team

It is all down to the way excellence is measured. QS, the organization that started to compile the rankings in 2004, designed the presentation of the 2018 findings in such a way that users can slice and dice the data in different ways. (Click here to access the World University Rankings website).

The main ranking takes into account four metrics, with the biggest weight – 50% of the total score – given to the identification by academics of universities they judge as excellent in research in the accounting and finance field.

The employer reputation survey, on the other hand, is about the opinion of companies that hire accounting and finance graduates on which universities are excellent for recruitment. Their judgment is presumably based on their experience with the graduates they have employed from the university.

Arguably, employer reputation may be a more useful tool for the CFO in deciding which universities to include in his or her recruitment drive, or as a supplementary data point when deciding which graduate is best suited to join the finance team.

The main ranking puts together four metrics that are weighted to come up with a composite score:

Academic reputation (50%). QS surveyed 75,015 academics around the world and asked them to provide them to identify the countries, regions and faculty areas they are most familiar with, and up to two narrower subject disciplines in which they have expertise. For each of the (up to five) faculty areas they identify, respondents were asked to list up to 10 domestic and 30 international institutions which they consider to be excellent for research in the given area. They are not able to select their own institution.

Employer reputation (30%). QS drew from the responses of 40,455 employers of graduates worldwide. The respondents were asked to identify up to 10 domestic and 30 international institutions they consider excellent for the recruitment of graduates. They were also asked to identify the disciplines from which they prefer to recruit. By examining the intersection of these two questions, QS inferred a measure of excellence in a given discipline.

Research citations per paper (10%). QS sourced data from the Scopus abstract and citation database spanning a five-year period to measure citations per paper. A minimum publication threshold is set for each subject (20 citations in Accounting and Finance) to avoid potential anomalies stemming from small numbers of highly cited papers.

H-index (10%). The h-index is a way of measuring both the productivity and impact of the published work of a scientist or scholar. The index is based on the set of the academic’s most cited papers and the number of citations that they have received in other publications. The h-index can also be applied to the productivity and impact of a group of scientists, such as a department, university or country.

And the Top 50 universities in accounting and finance based on the four metrics are:

The World’s Top Universities in Accounting and Finance 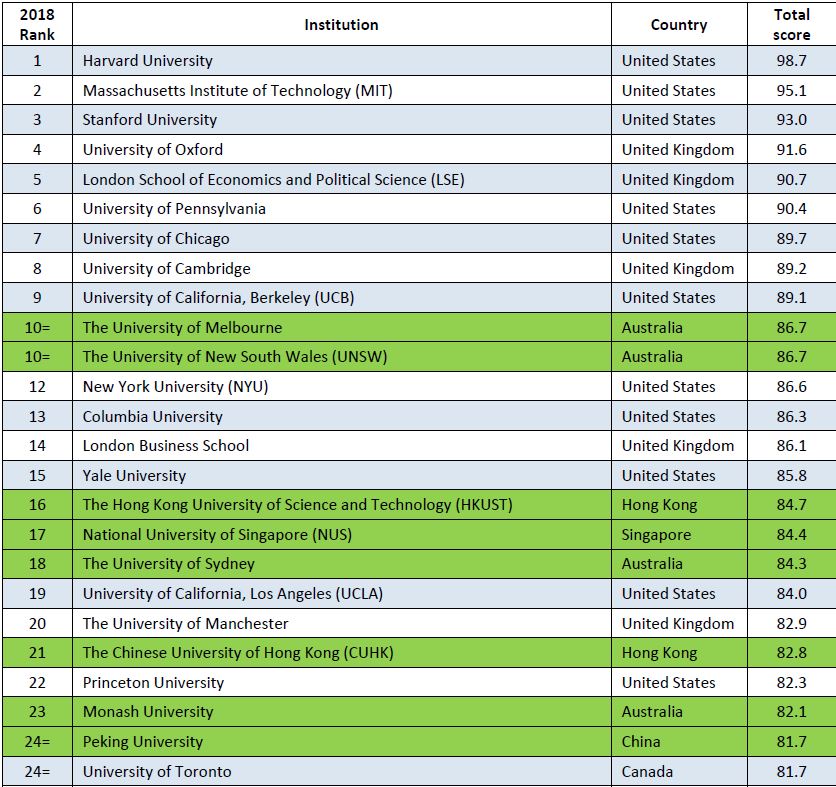 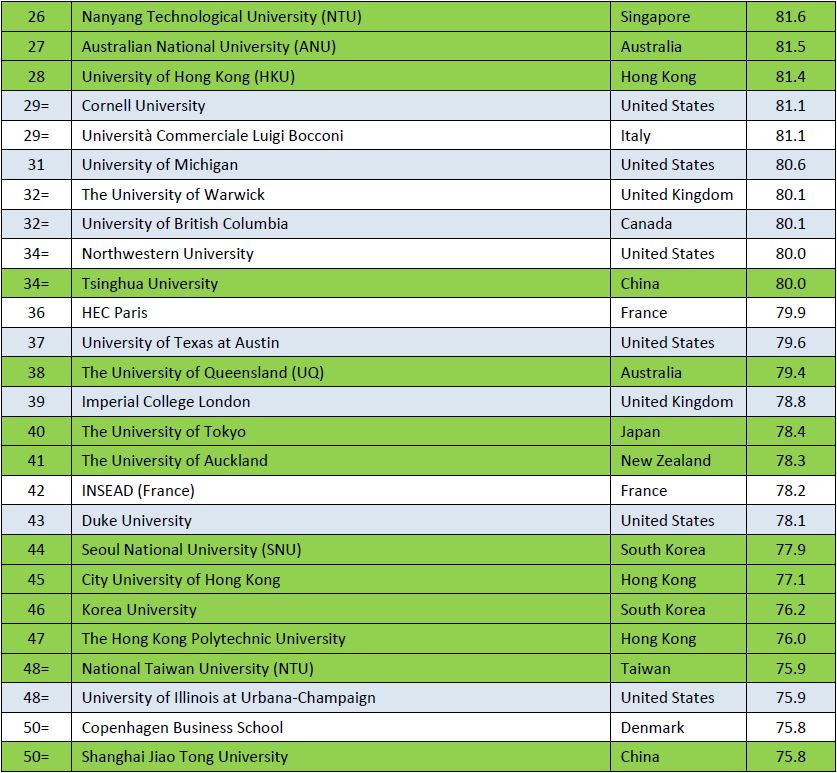 But which university do employers want?

The main ranking focuses on research, so it measures how current the accounting and finance faculty is in cutting-edge theory and practice. Those in the thick of pioneering studies in the field should be in the top rungs.

Asian Universities Preferred by Employers for Accounting and Finance 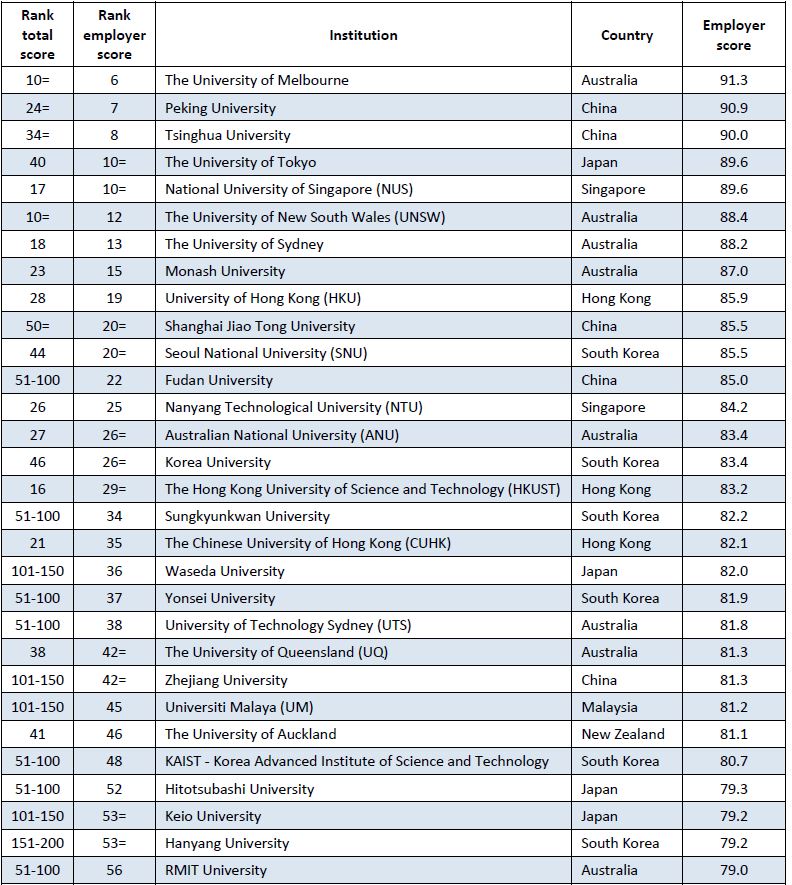 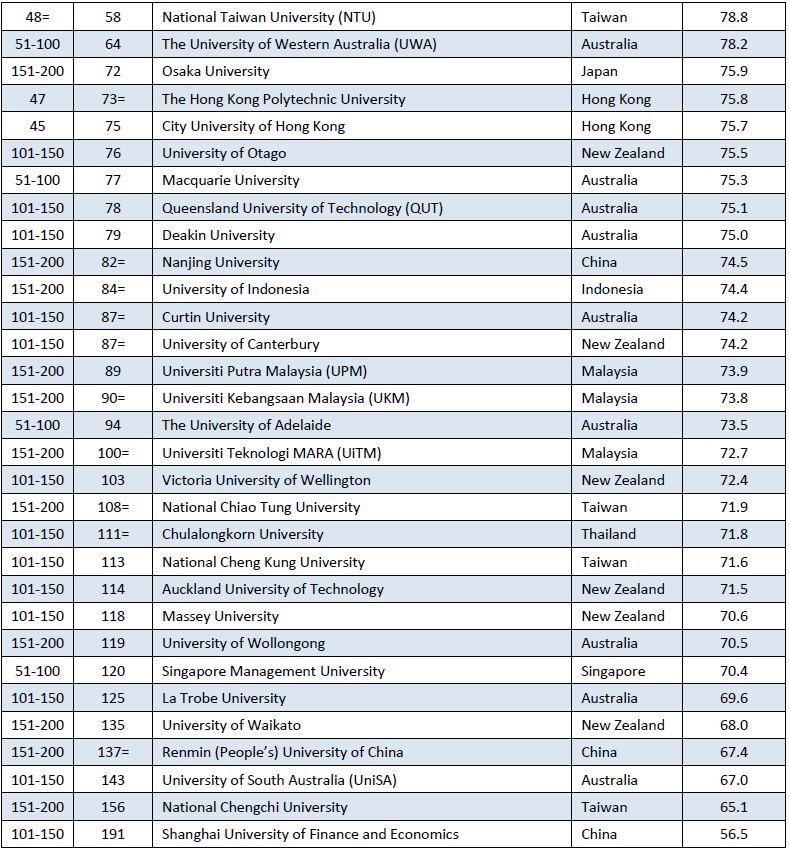 All things being equal, is a candidate with an accounting and finance degree from the University of Hong Kong (employer reputation score: 85.9 points) a better hire than someone from the Hong Kong University of Science of Technology (employer reputation score: 83.2 points), even though HKU ranks lower in the research-focused main ranking than HKUST (No. 28 versus No. 16)?

The question does not arise so much in China, Japan and Singapore, where employer reputation ranking pretty much aligns with the research-focused main ranking. There’s food for thought, though, for CFOs and HR departments in other jurisdictions where they do not.