Bad news for Hong Kong professionals: they will receive 1.8% real-terms salary increase in 2018—versus 2% in 2017— though the nominal-term raise is 4%, said ECA which recently released its Salary Trends Reports.

Higher inflation—estimated at 2.2% next year—is what drives Hong Kong’s real-term salary hike to the bottom ranks in the Asia Pacific region, according to ECA.

“Although the real salary increases we expect to see next year are low compared to the rest of the region, on a global scale, salaries in Hong Kong are still rising relatively fast. In addition, the increases are also respectable compared with other developed economies,” said Lee Quane, regional director - Asia at ECA International. "This reflects the need for companies to continue to use pay increases as a means of attracting and retaining staff in the city. ”

Across the border, firms are expected to provide staff with an average salary increase of 6% inChina next year despite slower economic growth recently, said ECA. Relatively low inflation will mean that China will once again be among the ten countries with the highest real rates of increase in 2018.

“A forecast average rate of increase in China of 6% is higher than the 5.5% awarded on average in 2017,” Quane noted. “This points to improved business sentiment in China, which perhaps shows that employers are more positive for the prospects of both the domestic and global economy in 2018.”

Asia-Pacific countries continue to outperform the rest of the world, occupying eight of the top ten spots in the global rankings of real salary increases with all locations expecting to receive above-inflation salary increases.

India is expected to keep the regional top spot in 2018, with a real rate of increase of 4.9% predicted. India will be joined within the global top ten in terms of real salary increases by fellow sub-continent nations of Pakistan and Bangladesh along with ASEAN nations of Vietnam, Indonesia, Thailand and Cambodia as well as China.

Singaporeans are expected to see a real salary increase of 2.7% in 2018, ranked 9th out of 20 countries surveyed in the region. 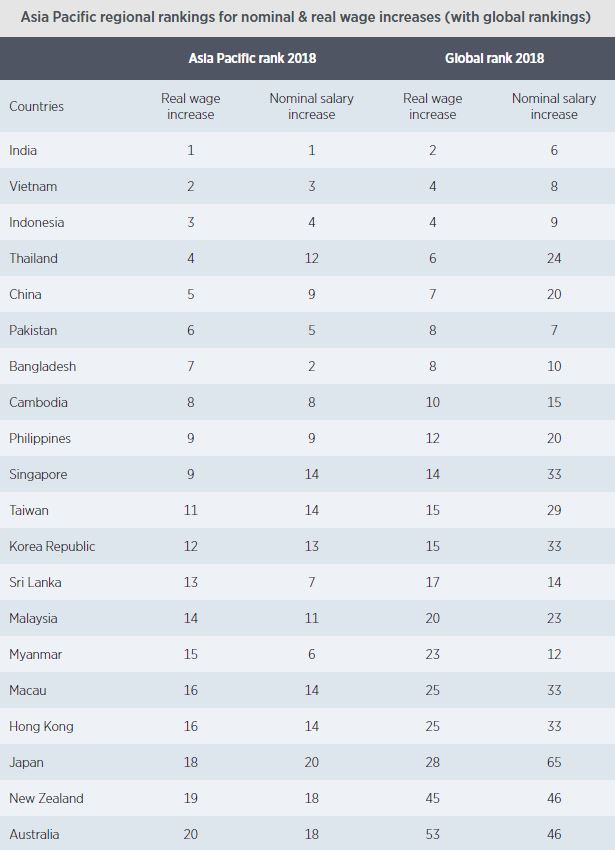