Executive Pay: Asia’s Millionaire CFOs and How They Got There 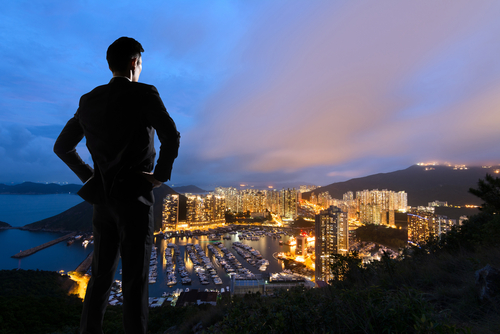 When CFO Innovation published its inaugural list of CFO salaries in 2012, 7.7% or 117 of the total 1,524 finance chiefs in the region whose compensation was reported in regulatory filings earned at least US$1 million in 2011.

And in this year’s list? According to S&P Capital IQ, a provider of multi-asset class and real-time data that compiles this annual ranking for CFO Innovation, there were only 99 CFOs in Asia who earned at least US$1 million in 2013 – 6.3% of the 1,560 listed companies whose compensation was reported in a regulatory filing.

Welcome to a world of diminishing returns. Some profit-linked bonuses were trimmed last year and the value of restricted stock awards shrank as well, despite the US and other stock markets ending 2013 in record territory. So some of the million-dollar CFOs of 2012 did not earn as much.

Peter Kenneth Allen, CFO of Australian shopping center company Westfield, saw his bonus fall 16% and the value of his stock awards slump a bigger 26%. At US$5.1 million, his total compensation last year was 21% smaller than in 2012, when he was Asia Pacific’s highest paid CFO.

That allowed Frank John Sixt, CFO of ports-to-telecom conglomerate Hutchison Whampoa in Hong Kong, to move past Allen and claim the No. 1 spot. Sixt earned US$6 million in 2013, up 3% from 2012.

But don’t cry for Mr. Allen. He is now CEO of Scentre Group, a new independent company created in June this year to own and manage the former Westfield’s Australian and New Zealand shopping centers.

Westfield Corp. is another new entity that now owns and manages the former Westfield’s interests in the US and Europe. It does not currently have a CFO (but has a deputy CFO in Elliott Rusanow, who may or may not appear on next year’s list).

The takeaway: You win some, you lose some. In 2012, everyone in the Top 50 list had their total compensation boosted by bonuses, with a number of them also enjoying gains from restricted stock awards.

But the pace of profit growth was apparently not as strong last year; at least ten of the Top 50 saw their bonuses fall in 2013. This has implications on the way CFOs negotiate in restructuring their total compensation.

As we observed in the last two years, rankings like this one are useful for benchmarking your own compensation package. The S&P Capital IQ database contains the actual earnings of more than 1,500 CFOs in fiscal year 2013, broken down into salary, bonus, restricted stock awards, option awards, non-equity incentive plan, pension plan changes and other forms of compensation.

Take note of this when salary negotiation time comes around, in your present company or if you’re moving to a new enterprise: The median total compensation of CFOs in Asia is the equivalent of US$197,249 (see table below), comprised primarily of salary (72%). 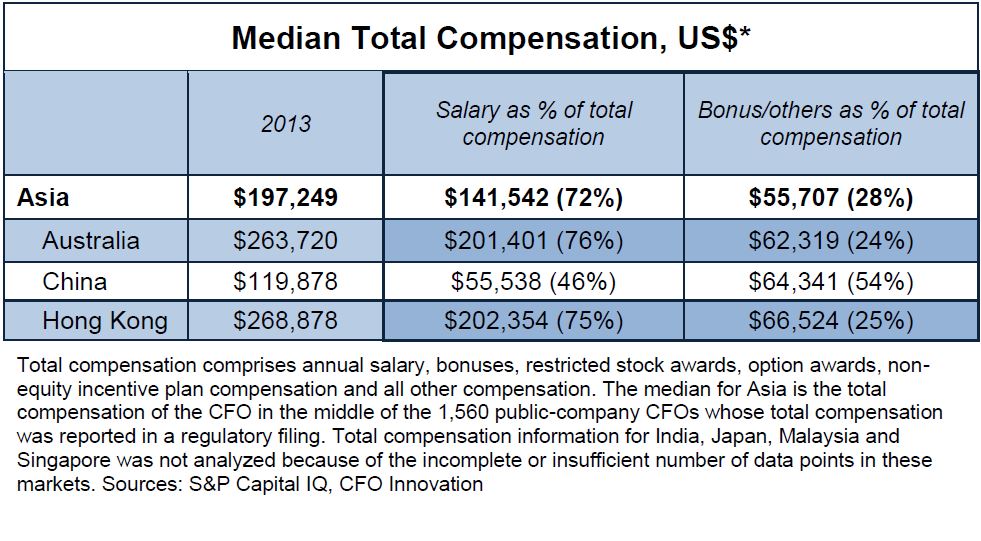 Three markets (Australia, China and Hong Kong) are highlighted because they have the most complete CFO compensation records. Information is limited on companies headquartered in Japan, Korea and Southeast Asia because those jurisdictions typically do not require reporting of executive compensation, require only reporting in aggregate or bands basis, or require disclosure of the pay only of the CEO and directors.

In Singapore, regulators require reporting of at least the top five key management personnel (aside from the CEO and directors, whose compensation numbers must be disclosed) in bands of S$250,000. Only 23 companies voluntarily disclosed CFO individual pay levels on a named basis, something that is encouraged but not required.

Of the three markets highlighted, Hong Kong companies pay the most in salary – the median there is US$202,354. That’s actually higher than the median of US$189,000 in 2012, suggesting that CFO salaries in Hong Kong are on the uptrend.

At the equivalent of US$55,538, the median salary in China lags far behind. But note that salary accounts for only 46% of total compensation in China, compared with 76% in Australia and 75% in Hong Kong.

So who are Asia’s millionaire-CFOs? Half of them are in Australia, in part because it is not a requirement to report actual CFO pay levels in Japan, Korea and Singapore, where CFOs are likely to be well-paid.

But the 25 Australia-based CFOs in this year’s list is down from 34 last year. There is a higher representation from Hong Kong and particularly Singapore, where voluntary disclosure of actual CFO pay is gaining traction (see charts below and the next page). 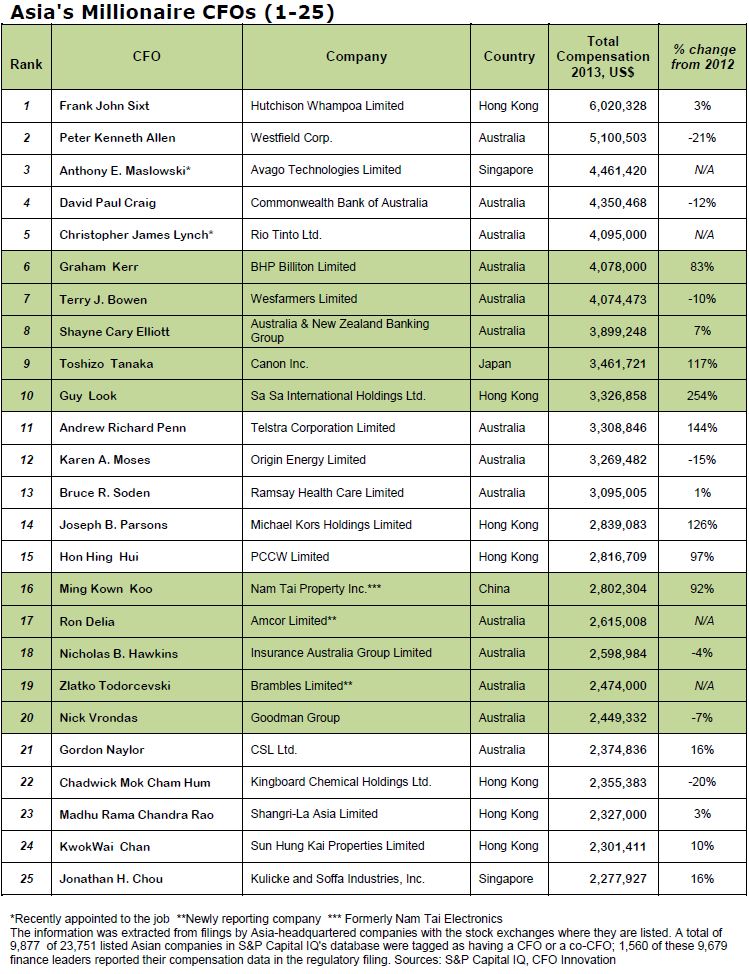 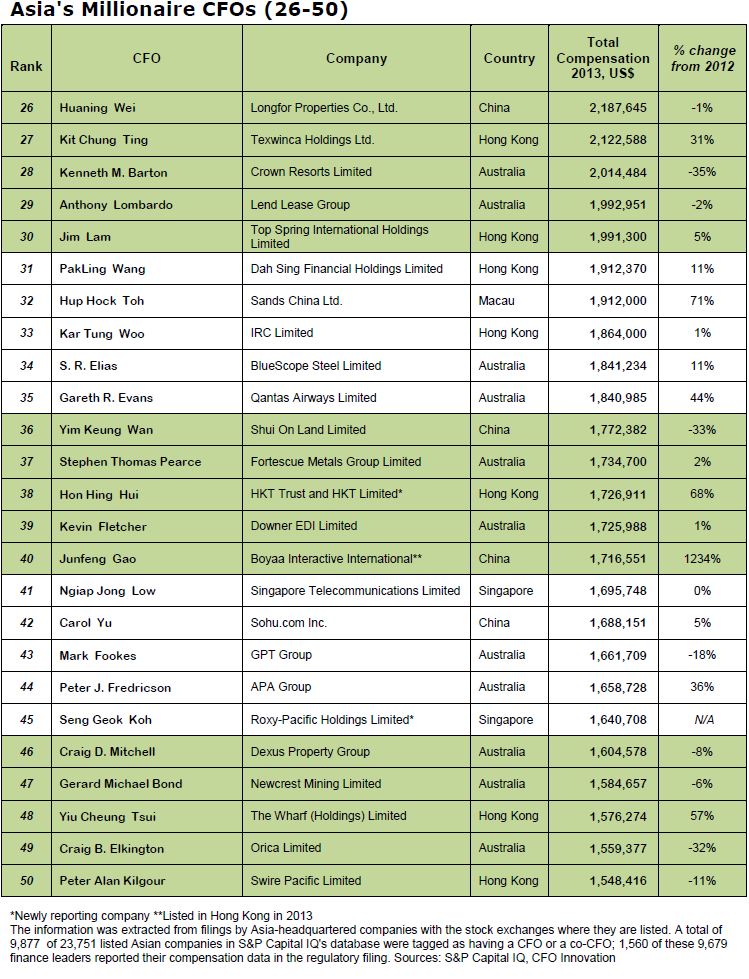 Because the Australians dominate the regional league table, some millionaire CFOs from other markets were pushed out of the list. We rank the top 12 best paid CFOs in the S&P Capital IQ database according to domicile. 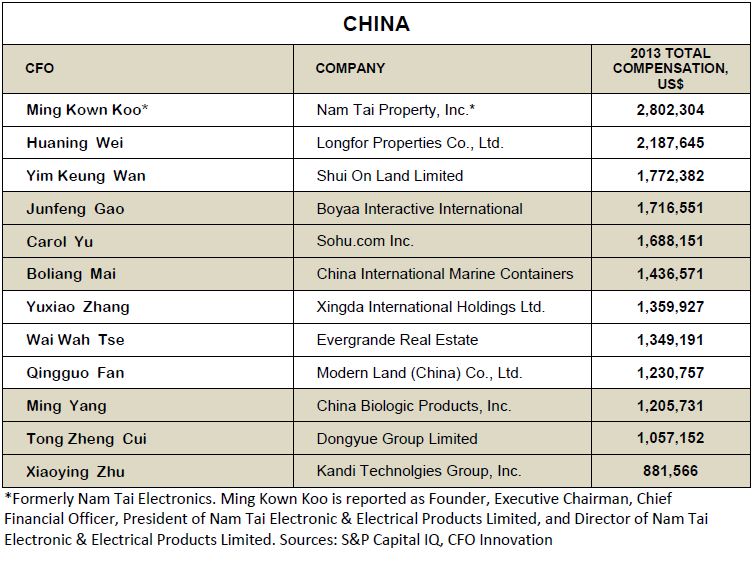 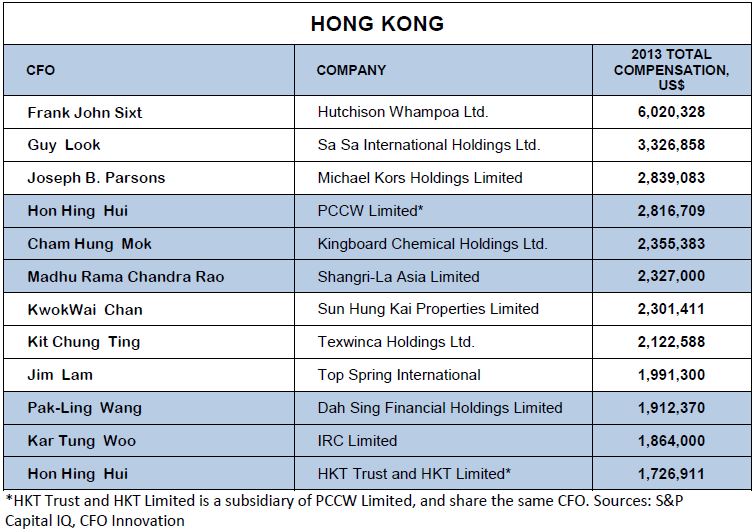 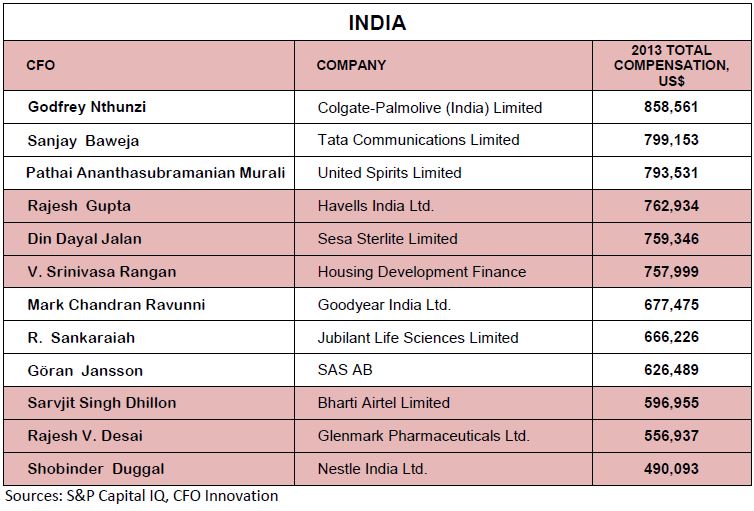 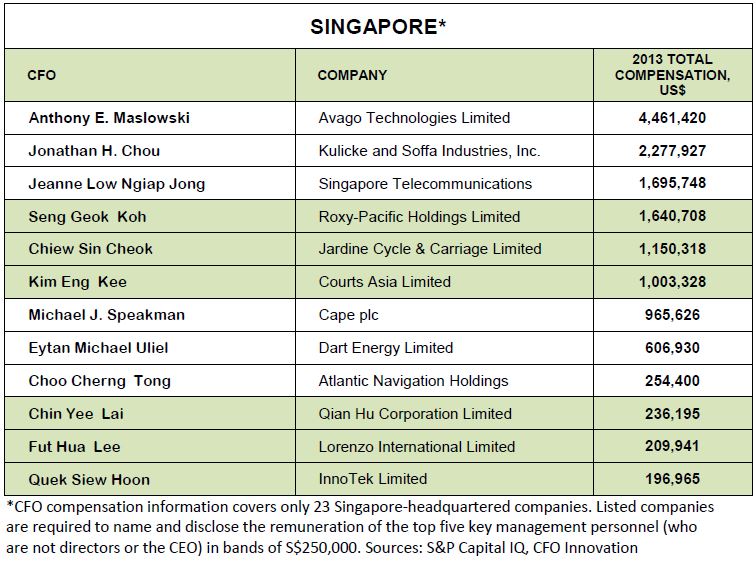 What insights can we draw from this year’s list? One is the power of non-salary elements (bonuses, share options and the like) to boost total compensation – or trim it.

But her salary increased 9% to US$460,000, which is about the rate of annual salary increases for senior finance executives in China, as tracked by executive recruitment firms like Hays and Robert Half.

Structuring your compensation package to include stock and option components would seem to be a good move. But don’t expect immediate or stable gains.

And think twice before letting bonuses, stock options and other ways of compensation replace a portion your salary. In this and past lists, the most stable element has always been the salary component. It makes sense to accept other incentives only if they supplement, not supplant, basic salary.

Another insight: The highest flying CFOs have very broad responsibilities. Telstra’s Group CFO Penn, for example, is also Group Managing Director of Finance and Strategy and Head of Asian Business.

Needless to say, the size of the company, the industry where it operates, and the country where it is headquartered also have a bearing. Gender is a determinant of high pay as well.

What we said when we launched the inaugural list two years ago still applies today. “If you aim to become a million-dollar CFO, it helps to be a man in a major company in financial services, real estate, oil and gas, mining, retail and telecommunications.”

One shortcut is to be the CFO of a company that's about to list, as Junfeng Gao was before Chinese mobile game developer Boyaa Interactive floated shares in Hong Kong in 2013. Gao's compensation jumped more than 1,000% to US$1.7 million on the back of his stock awards. The question, though, is whether the steep rise is sustainable in the coming years.