Executive Compensation: Is Your CEO Among the Best Paid in Asia? 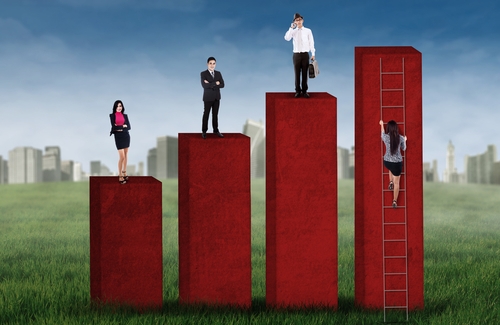 As CFO, you of course have ways of knowing exactly how much the CEO and others in the organization get paid, if you are really interested.

But do you know how much your CEO’s peers make and how much your own peers earn, as well as the Asia Pacific benchmarks for these posts? The numbers could provide you with valuable input in deciding whether it makes sense for you to aspire to be CEO or remain in finance.

On average, CFO compensation Asia-wide is equal to about 63% of the average CEO package, with Hong Kong and Australia even smaller at 49% and 52%, respectively

To find the answer, CFO Innovation asked S&P Capital IQ to rank the total compensation of CEOs in Asia-headquartered listed companies, as companion piece to an article on the pay of the region’s CFOs we recently published.

S&P Capital IQ, a global provider of multi-asset class and real-time data, searched its database and found regulatory filings on CEO pay by 4,634 companies. Of these, 1,560 also had information on CFO compensation – regulators in Japan, Korea and Southeast Asia typically do not require (but encourage) named-reporting of CFO pay.

And the answer is: Yes, it makes sense, from the purely financial viewpoint, for a CFO to aspire to become a CEO. On average, the CEO of a listed company in Asia made the equivalent of US$544,548 in 2013, compared with the average of US$344,997 earnings of the CFO.

On average, CFO compensation Asia-wide is equal to about 63% of the average CEO package, with Hong Kong and Australia even smaller at 49% and 52%, respectively (see table below). CFO pay data for Japan, Korea, India, Malaysia and Singapore are incomplete because regulators there do not require disclosure of this information, though some companies disclose voluntarily or because they are listed outside the home country in exchanges that require disclosure. 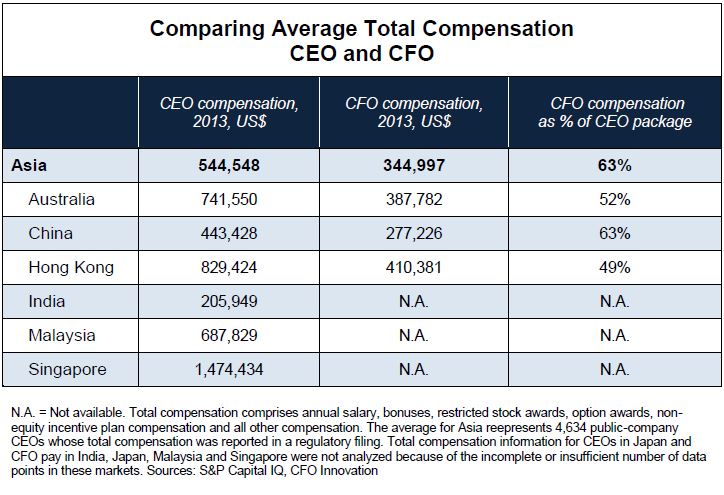 The difference between CEO and CFO pay is much starker on an individual basis. For example, the best-paid CEO in Asia is Hock E. Tan of Singapore-headquartered Avago Technologies Limited, a former division of HP that is now one of the world’s largest semiconductor companies.

Tan earned US$31.9 million in salary, bonuses, stock options and other incentives in 2013. His CFO, Anthony Maslowski, was paid US$4.5 million – 14% of the boss’s total compensation.

No. 2 in the Best Paid CEOs list is Kin Ning Fok of Hong Kong ports-to-property-to-telecoms conglomerate Hutchison Whampoa. He was paid US$24.2 million in 2013. His CFO, Frank John Sixt, earned US$6 million, good enough for the No. 1 slot in the CFO list – but equal to just 25% of the CEO’s total compensation.

And Eng Meng Tai, CEO of rice cracker maker Want Want China Holdings, was paid US$17.2 million last year. His CFO, Chi Wen Chu, made US$395,000, or 2% of the chief executive's total compensation.

Below is the list of Asia’s 50 Best Paid CEOs and how much the CFO’s compensation is as a proportion of the CEO pay, when available. 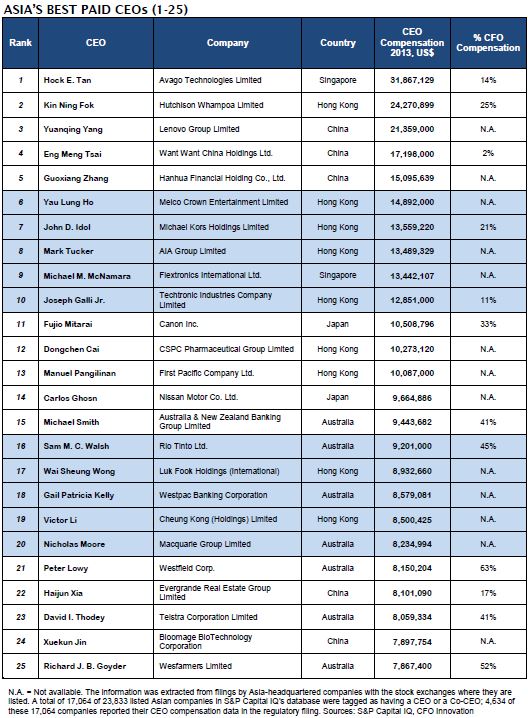 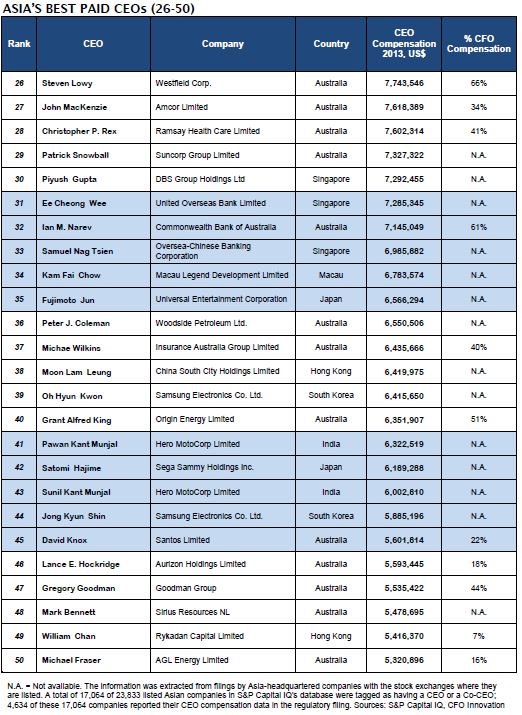 As in the CFO league table, Australians dominate the CEO list, occupying 20 of the 50 slots. Some highly paid CEOs from other places were thus pushed out of the main ranking.

We list the top 20 best paid CEOs by country in the tables below, along with the proportion of CFO pay relative to CEO compensation, when available. 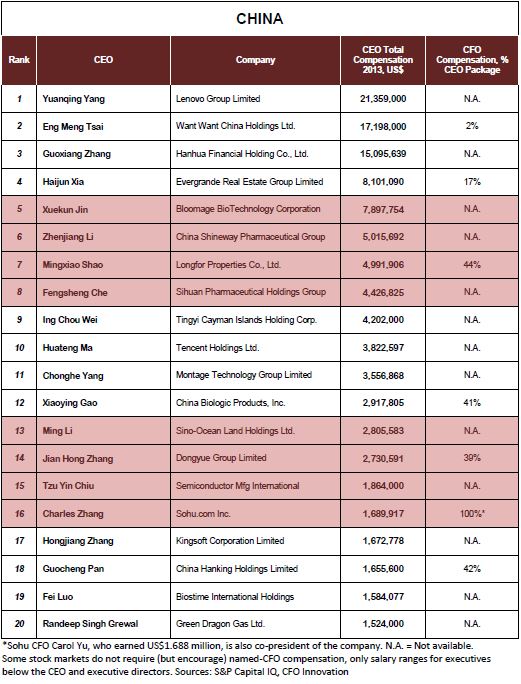 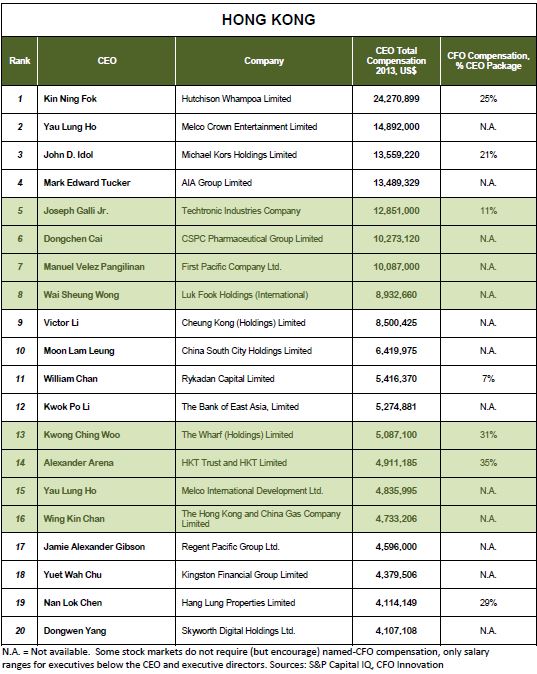 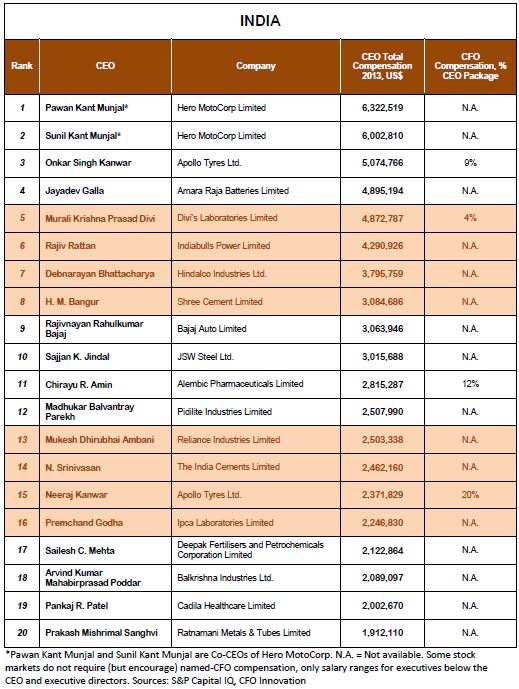 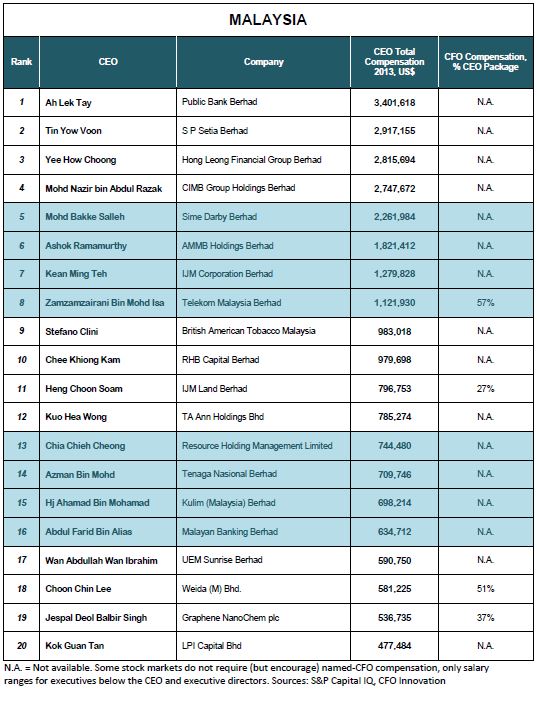 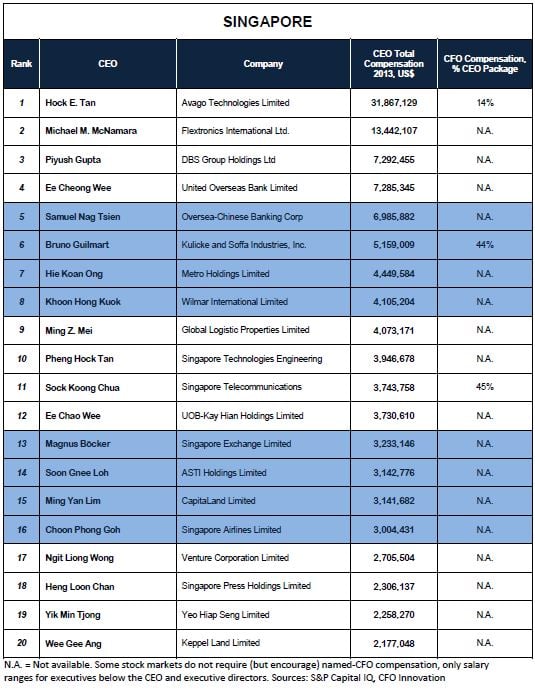 How to Become a CEO

Convinced? Money is not all that matters, of course, even though more and more CFOs appear to be succeeding in becoming a CEO these days. PepsiCo CEO Indra Nooyi is one of them.

“CFOs are getting more and more involved in strategic decisions,” Nooyi, who was PepsiCo CFO from 2001 until she became President and CEO in 2006, told the Wall Street Journal in June. “Most CEOs I talk to look upon their CFO as a partner, and they’re bringing them into the process extremely early.”

But, she cautions, “if CFOs expect somebody to give them a structure, and to play with a narrow set of rules, it’s hard to be a CEO.” Nooyi compares the job of the CEO with that of the leader of a jazz orchestra. “We have to make up the music as we go along.”

CFOs tend to be good at a structured role, like the conductor of a symphony orchestra, observes the PepsiCo CEO and chairman. So it could be a challenge when you move to a role where you are required to improvise.

If becoming a CEO is really part of your career plan, however, here are some suggested action steps:

Get on the CEO succession track. As partner to the CEO, the CFO seemingly has an advantage, but if you are seen as more a potential orchestra conductor rather than a jazz leader, you might not be in serious contention. Demonstrate out-of-the-box thinking and the ability to improvise. And cultivate your CEO as a mentor, provided he or she is willing to be one (some CEOs may be protective of their position).

Know both operations and strategy. As CFO, you would know which levers to pull to make the business profitable. But don’t get too hung up on the operational and financial details. Practice blending the on-the-ground micro perspective with blue-sky, big picture thinking.

Create a superior finance team. You cannot focus on strategy and other CEO concerns if you have to be very hands-on with regards to accounting, control, closing, reporting and other financial grunt work. Outsource, automate and use technology when you can to free up more of your and your team’s time. Building a top-notch team will also demonstrate your talent management and people skills.

Hone your communication skills. Being a CEO these days requires interfacing with a wide range of internal and external constituencies, including journalists and TV business programs. As CFO, you have ample opportunities to present at earnings announcements, investor roadshows, meetings with bankers and so on. Build on that experience to communicate, inspire and persuade other audiences. Speak at professional conferences, graduation exercises, business school classes; engage with the media; volunteer and be on the board of arts organizations, charitable institutions, environmental groups.

Earn your MBA. Complete your post-graduate management degree preferably from a globally recognized brand-name B-school such as Harvard Business School, Insead, Hong Kong UST, National University of Singapore, Indian School of Business, Kellogg, Yale. It helps with the optics, even if you privately think you already know from real life what you need to know or that MBA stands for "Master Bull**** Artist." An MBA course also helps with your communication skills, written and oral, and networking.