Becoming a Foreigner: The Best Places for Asian Expatriates 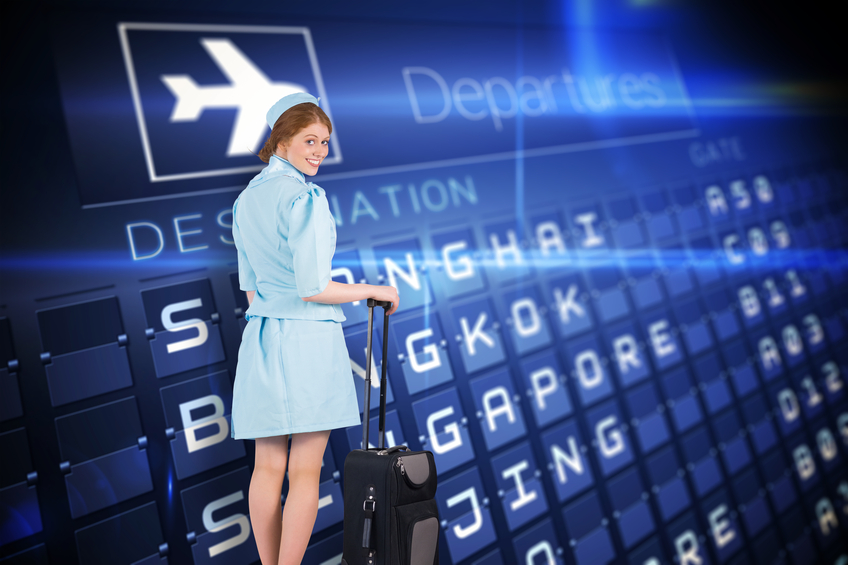 I am an Asian expat. I have been working outside of my native Philippines for nearly three decades now, mostly in Hong Kong and a few years in the 1990s in Malaysia.  I have also traveled for business and pleasure across Asia, from China to India to Indonesia, Japan, Korea Thailand and Vietnam.

A CFO attending the CFO Innovation Asia Forum in Singapore once asked me for advice about accepting an offer to work in Myanmar. That Southeast Asian country is not included in the latest HSBC survey because there were fewer than 100 respondents living there who participated in the study (out of 26,871 respondents from 190 countries currently living away from their home country).

I told the CFO Myanmar is probably going to be an interesting experience, provided she is single and paid highly enough such that she could save more than if she were to remain in Singapore. But if Myanmar were part of the HSBC survey, she could have gleaned more information about the level of disposable income, political stability, work/life balance, lifestyle and other aspects of living and working in that frontier economy.

Which country do the world’s expats give the highest scores to? It’s Singapore, followed by New Zealand, Canada, the Czech Republic and Switzerland

That’s the value of studies like HSBC’s, which is now on its ninth year. They can give the would-be Asian expat a starting point in making a wise decision. These surveys will become more important as initiatives like the ASEAN Economic Community open up cross-border opportunities for finance leaders to become foreigners in the ten member nations.

The HSBC study is a comprehensive take on the expat experience. The pollster YouGov conducted an online survey in March and April this year, asking 27 questions covering the following areas:

Respondents were asked to score each country on a scale of zero to one, with the highest overall score ranking first and the lowest ranking last.

So which country do the world’s expats give the highest scores to? It’s Singapore, followed by New Zealand, Canada, the Czech Republic and Switzerland. The UK comes in at No. 22 – and the US at No. 30.

Fifteen Asia Pacific markets made it to the league table. Hong Kong, seen as Singapore’s rival as a financial and business center, is No. 13, Taiwan is No. 14, and China is way down in 34th place.

The Philippines (No. 37) and Indonesia (No. 38) are near the bottom, but are seen as comparatively better as expat locales than Chile, Italy and Brazil.

The Best Places to be an Expatriate in Asia 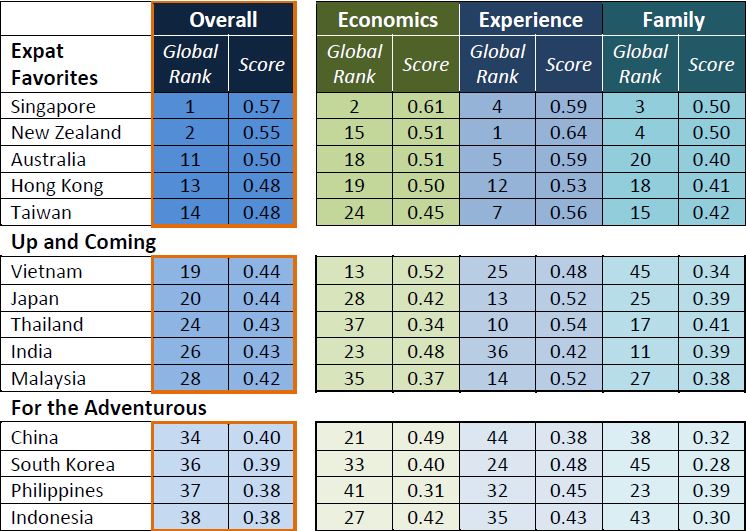 This is the second year in a row that the Lion City, which has a population of 5.4 million, is rated “the best country overall to live, work and bring up children,” says the HSBC report.

Singapore actually ranks No. 2 on economics (Switzerland is ahead), No. 4 on experience (New Zealand, Spain and Canada are rated higher) and No. 3 on family (behind Sweden and the Czech Republic). But overall, its combined scores make it No. 1.

Six out of ten expatriates living in Singapore (62%) say they are earning more than they would be if they were working back home. That’s a lot higher than the 39% of expats in Asia Pacific and 42% globally that say the same.

The majority indicate they are saving more in Singapore than they did in their home country (60%), and believe that the Southeast Asian nation is a good place for career development (62%). The average yearly salary of expats in Singapore is US$139,000, compared with the global average of US$97,000.

“Singapore also stands out as a good place to raise a family,” says the report. “Three quarters (75%) of expats rate the quality of education as better than in their home country.” And 84% say they feel safer in Singapore than they do back home.

The overall quality of life, 66% of the expats reckon, is better in Singapore than in their native land.

At US$170,000, the average annual gross personal income for expats in Hong Kong is higher than Singapore’s US$139,000 and much higher than the global average of US$97,000

What about Hong Kong?

While Hong Kong ranks only 13th overall, it is “a desirable place for expats seeking to earn more and save more than at home,” says HSBC.

According to the report, “the income levels reported by expats in the territory are higher than the global average, and expats are optimistic that working in Hong Kong will support their future career and earning prospects.”

However, 79% of expat parents in Hong Kong say education there is more expensive than in their home country, which suggests that the territory is perhaps more suitable for single expats and childless couples (or those whose children are already adults or in university back home).

Hong Kong is a city for entrepreneurs, suggest the expats living there. The majority, 53%, agree that it is a good place to start or grow a business, compared with 38% globally (58% of expats in Singapore say the same).

Asia’s three giant economies are regarded comparatively less positively compared with Hong Kong and Singapore by the expats living and working there, according to the survey findings.

Japan. Ranked 20th overall, Japan performs relatively poorly on earning prospects, with only 39% of expats living there rating the country highly on this measure (versus 63% in Hong Kong and 62% in Singapore).

The average yearly salary of expats in Japan across all industries is US$108,592, higher than the global average but lower than in Hong Kong and Singapore.

But Japan is ranked No. 1 for safety and No. 3 for culture. Public transport is fast, efficient and inexpensive, with the bullet trains (Shinkansen) for long-distance travel “legendary,” says HSBC. Hospitals are well-equipped and have high standards, but consulting with doctors can be challenging because of the language barrier.

India. Ranked 26th overall, India has the highest proportion of expats on international secondment or assignment, with 33% of those surveyed saying they have been relocated there by their employer, compared with 26% in Hong Kong and 22% in Singapore.

A third of expats in India (33%) rate the country highly on earnings prospects, a lower proportion than in Hong Kong, Singapore and in Japan. The average yearly expat salary is US$131,707, higher than the global average and on par with Japan. But that is lower than in Hong Kong and Singapore.

China. The responses of expats in China resulted in an overall ranking of No. 34, in the third quartile of the 45 economies in the survey. The country is rated relatively highly on economics (ranked 21st – the average yearly expat salary is US$157,925, much higher than in Japan – but not as well in experience and family.

Surprisingly, expats in Vietnam rate this country more highly than do expats in Thailand and Malaysia (and even Japan, India and South Korea)

It also ranks low on family (38th), on such factors as how welcoming the country is from a diversity point of view, quality of education, and expat children’s health and well-being – the pollution in Beijing and other cities is surely a factor.

There are already many Malaysian finance professionals in Singapore, Filipino CFOs in Indonesia and Singaporean finance specialists in Brunei. Cross-border opportunities are set to increase even more as the ASEAN Economic Community’s program of harmonizing finance qualifications and opening up the accounting sector across the ten member nations gathers pace.

Vietnam. Surprisingly, expats in Vietnam rate this country more highly than do expats in Thailand and Malaysia (and even Japan, India and South Korea) rate those nations. Ranked 19th, Vietnam does well on economics (No. 13), but poorly on family.

Expats in Vietnam earn an average annual salary of US$88,522 and 60% have health and medical allowances, 45% accommodation allowance and 44% annual trip(s) home/airfare allowance.

Ranked 35th in family factors, expats in Vietnam are not as positive on such things as quality of childcare and education, expat children’s health and wellbeing and overall quality of life.

Thailand. Vietnam’s neighbor is ranked 24th overall, scoring highly on experience (ranked 10th) and in family (17th), but is held back on economics. Only 21% of expats living in Thailand rate it highly on earning prospects, compared with 31% in Vietnam (although the average annual salary of expats in Thailand is US$92,669, higher than in Vietnam).

Thailand’s ruling military junta, which took over after years of conflict between the main political parties that boiled over into violent protests, could have affected expat confidence in the local economy and in Thailand’s political stability. The death of revered King Bhumibol Adulyadej last week will not help matters.

But 57% of expats in Thailand rate it highly on work-life balance, 72% say they receive health and medical allowances, and 42% get accommodation allowance. And accommodation is “affordable and modern,” says HSBC – expats living there rate property in Thailand highly.

Malaysia. Ranked 28th overall, Malaysia does well on experience (No. 14), but not as good on economics (No. 35), even though the average annual expat salary of US$104,000 is higher than in Thailand and Vietnam.

The HSBC report is silent on alleged money laundering and corruption involving state-owned company 1MDB, which is being probed by Switzerland, Singapore, the US and other jurisdictions. But as it draws closer to the prime minister and his family, the scandal may be weighing on expat confidence in the local economy and their view of the country’s political stability.

Still, says the HSBC report, “Malaysia offers expats a good work/life balance, a friendly culture and lower costs for raising a child.” Around 78% of expats in Malaysia say that their work/life balance is as good as or better than in their home country” – a proportion higher than in Asia Pacific as a whole (72%).

Three out of ten expats surveyed (32%) own their own homes in their host country; 41% own property in their native land. In China, 66% of expats who bought property believe it is a good investment

Combing through the findings, HSBC highlighted some insights and practical steps that it says could help current and would-be expats make the most of their time as foreigners.

Take advantage of the chance to accelerate your financial plans. “Before moving, have a financial review of your long-term plans and consider if expat life can help speed up progress towards achieving your financial goals,” counsels the report.

HSBC notes that 40% of the respondents say life abroad boosted their ability to save for retirement, with 38% saying it made it easier for them to make other long-term savings and investments.

Buy property when you can. Three out of ten expats surveyed (32%) own their own homes in their host country; 41% own property in their native land. In China, 66% of expats who bought property believe it is a good investment (global average: 47%).

“If you live abroad and plan to buy a property back home, either as a buy-to-let investment or to live in when you return, make sure to seek professional advice,” HSBC advises. “If you plan to buy where you live, make sure you understand the local property market and regulations, as these can affect your ability to rent or sell your property if you move again.”