Seven out of the 10 countries that are best places for expats are in Asia, according to HSBC’s Expat Explorer survey. The region is also home to the greatest number of high-earning expats: 19 percent earned more than US$200,000 a year. In China, this rose to 38 per cent.

Asia was also a popular destination for those seeking a new challenge, with 44 per cent saying that this was their reason for moving there.

Switzerland is the best place to live overseas, according to HSBC’s Expat Explorer survey. Expats praised the career opportunities, high-quality education and sporting facilities available in the country.

Switzerland topped the league table of 34 countries and territories because it offered the best experience overall, taking into account all the different criteria. It was one of only two European countries in the top ten, compared with seven from Asia – including Singapore, China and India.

The Middle East was favoured by career-minded expats, with more than half of those moving to the region saying that they were hoping to improve their job prospects. Expats living in the Middle East were also more confident about the local economic outlook than in any other region.

However, some expats had different priorities. New Zealand was voted the best place to raise a family abroad. It was also rated highly for its climate and scenery (89 per cent), friendly people (75 per cent) and good work/life balance (71 per cent).

Canada was a popular destination for retirement: 31 per cent of expats living in the country were no longer working, compared with 11 per cent globally. It was also seen as a place where it was easy to integrate into the local community (76 per cent), as was the US (73 per cent).

Italy and the UK were the most likely places for expats to find love. More than half of those living in each country had found a life partner since arriving.

“A stint abroad often brings a new perspective on different ways of living, new challenges and the chance to experience different cultures," says Dean Blackburn, Head of HSBC Expat. "This year’s Expat Explorer league table shows that there are many countries that offer a good balance, providing expats with a rewarding and exciting experience.” 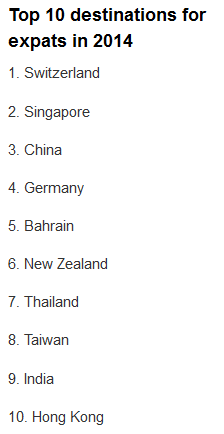