As Asia Accelerates Hiring, Finance Should Be Ready to Manage the Spending

The company budget has long been locked down, including investment in human resources. But if the latest survey findings for the second half of 2014 by executive recruiter Hudson are correct, some CFOs may have to rethink the assumptions underlying the allocated HR spending.

In its second-half 2014 report, Hudson says 47.8% of employers it surveyed in Hong Kong now say they expect to hire permanent workers. Just 38.3% said the same in the first quarter of the year.

Hiring expectations in China and Singapore are also higher today than in the beginning of the year. This is good news – it indicates that business activity is picking up in Asia on the back of encouraging news in the major economies, including the United States and Japan, and what looks like some stabilization in China's growth slowdown.

But the brightening picture also present challenges to CFOs and others in the business, if the need for more hiring (and increments and bonuses for existing staff) had not been anticipated in the 2014 budget.

Some fast footwork may be required to reallocate spending, intensify cost management to free up funds for new hiring or find new sources of funding.

Or finance may opt to allow the budgeted amount for hiring to be exceeded, in the expectation that higher-than-budgeted revenues and profits down the road will make up for that blow-out.

In any case, finance needs to work closely with HR and the lines of business in managing the new hiring, and also in granting salary increments and bonuses to existing staff who might be lured away by other organizations.

A solid business case must back up the new hiring, ideally down to the unit level. It is not uncommon for companies to start hiring only to find that the anticipated return is not happening for any number of reasons.

The cost of fixing that mistake, in both financial and reputational terms, can turn out to be higher than if the company did not add to the workforce in the first place.

According to the Hudson survey, permanent hiring expectations in Hong Kong have increased by nine percentage points from the beginning of the year. Of the 47.8% that expect to hire, more than one in two (53.6%) anticipate that they will increase headcount over the next six months.

Correspondingly, intentions in Hong Kong to decrease headcount has fallen to just 1.6% (see chart below). 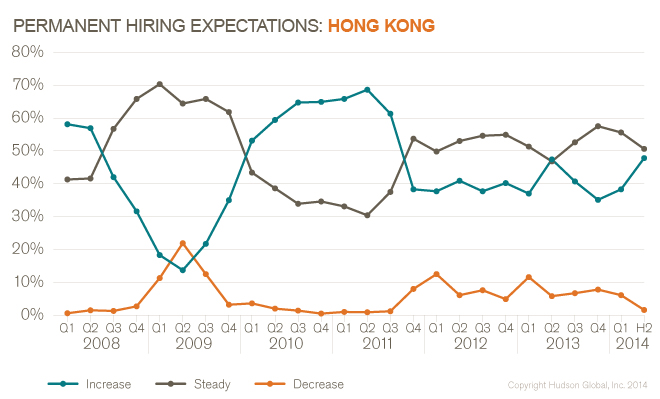 The hiring trend in Hong Kong is consistent with a better business outlook, as demonstrated by the findings of the city’s Census and Statistics Department. Its survey in the second half of 2014 found that nearly all business sectors in Hong Kong expect their business situation to improve.

“In a market such as this, we increasingly see organizations focused on ensuring the talent they select is innovative, adaptable and most of all efficient," says Tony Pownall, General Manager of Hudson Hong Kong.

"Continual transformation is the new normal and today's workforce needs to have the flexibility to drive business success."

There are variations according to sector, though. In Hong Kong, the manufacturing & industrial sector continue to drive hiring appetite (53.6%), whereas the consumer industry (i.e. retail and fast moving consumer goods) is under pressure to the change in tourist spending behavior from luxury commodities to mid-priced products.

According to Pownall, banking and financial services companies are also more cautious as they head into the second half of the year.

“China’s ongoing measures to monitor and fine-tune its banking policies to stabilize growth have pushed Hong Kong banks to remain cautious in their employment outlook,” he says. “Many banks are maintaining staff levels rather than proactively increasing them.” 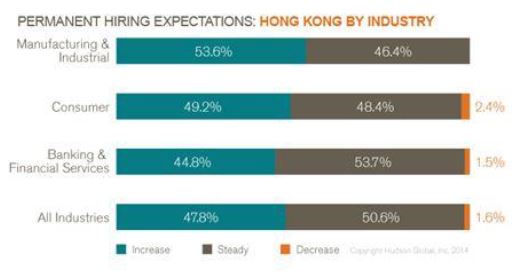 Hiring intentions in Singapore are more positive now compared with the sentiment in the beginning of the year, according to Hudson Singapore. Nearly half of the employers surveyed (47.3%) indicate they will be hiring more permanent staff in the second half of the year, a 7.8 percentage increase from the first quarter.

But stricter hiring rules that focus on local talent rather than expatriates may create challenges. The Singapore government has raised the levy that companies must pay to hire foreign workers and reduced the quota for foreign workers according to industry.

As in Hong Kong, hiring intentions in Singapore vary by sector. The highest proportion of companies that intend to hire is in banking and financial services (56.3%) and in information technology and telecommunications (52.4%). 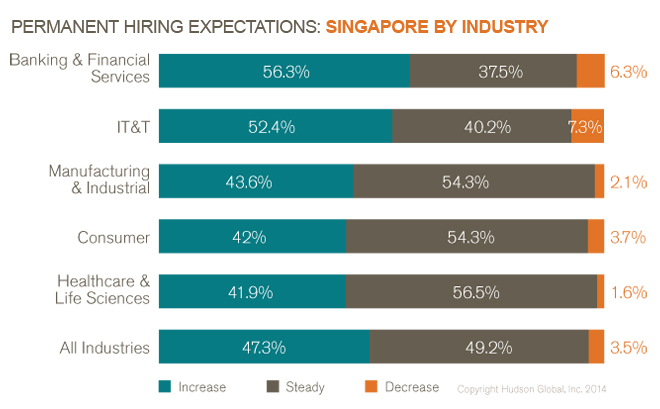 Interestingly, property and construction companies are the most aggressive about hiring, with more than eight out of ten (84.8%) indicating they will be recruiting more workers in the second half of the year. This, despite prognostications that falling house prices and potential cash-flow problems could bring gloom to China’s property sector.

Banking and financial services firms also anticipate a hiring binge (73.5%), along with information technology and telecommunications (56.8%).

China’s economy is being restructured to make domestic consumption a stronger driver of GDP growth, but companies in this sector are not notably recruiting in the second half of 2014. The majority (53.5%) will neither hire nor fire. The same intention is evident among professional services firms (52.1%). 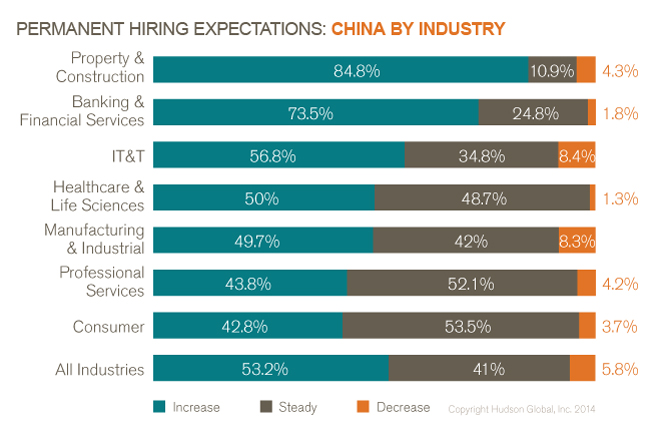 In November 2013, both Hudson Asia and Hudson Singapore conducted a survey on salary trends in Singapore, Hong Kong and China involving 1,751 employers and 2,807 employees.

Where does all this leave CFOs and others in finance in terms of 2014 salaries? Below are the salary levels that Hudson is forecasting for Singapore, Hong Kong and China: 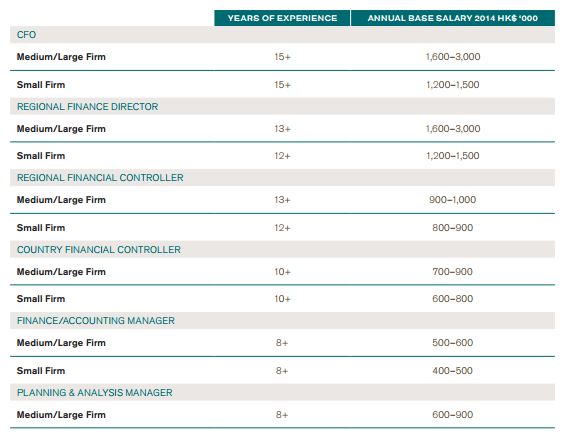 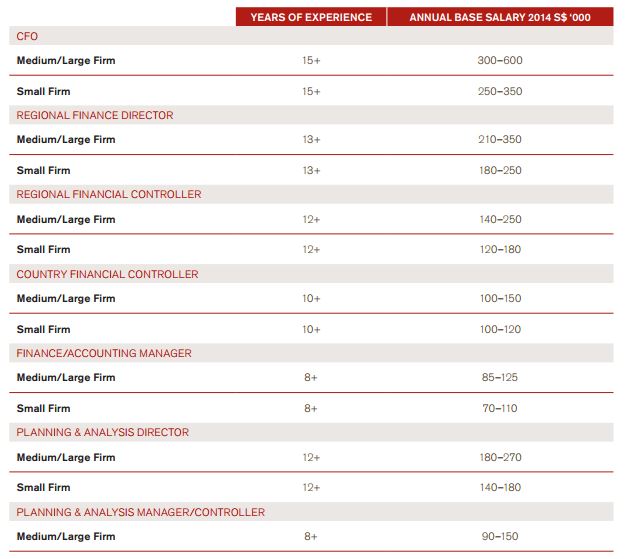 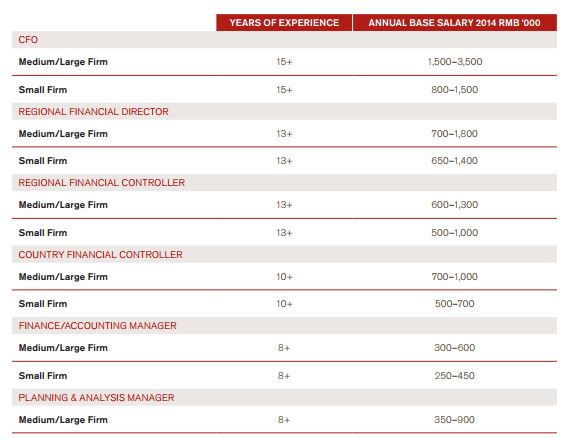 Jefferson Mendoza is Online Editor at CFO Innovation based in Hong Kong.