The Accountant Who Became Managing Director 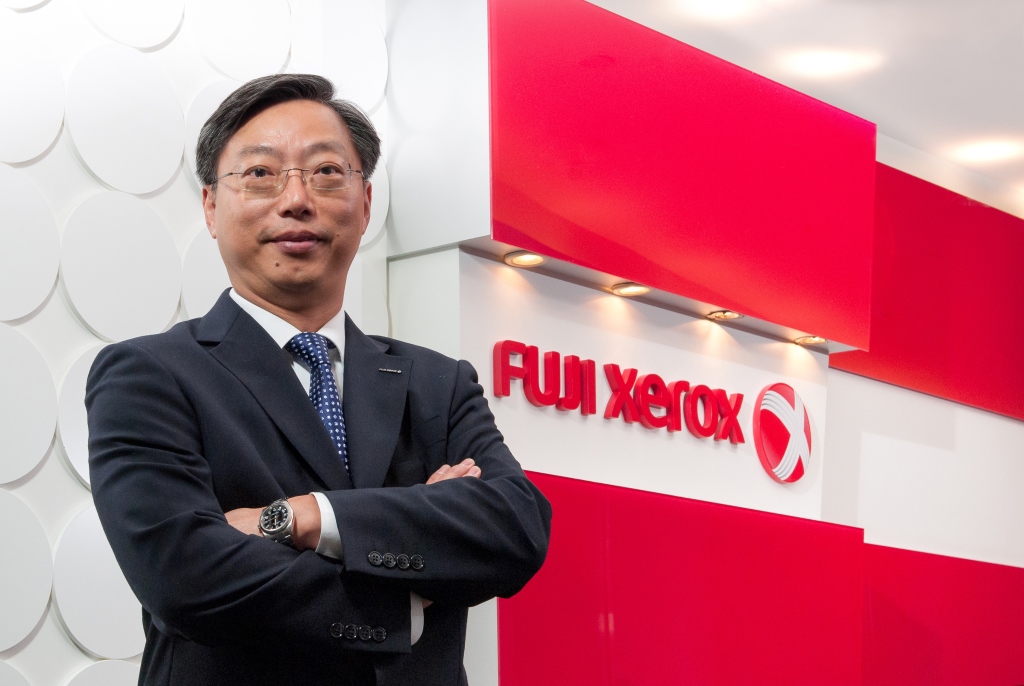 As a high school student in Hong Kong, Herbert Hui decided he wanted to be an accountant. “I don’t know why,” he recalls. “I wasn’t even that good in math.” But soon after graduation, he showed up at the offices of Peat Marwick, which later became KPMG, to interview for a position as audit trainee.
“I still remember the general manager asking me some questions about auditing, accounting and banking,” Hui recounts. The young man could not answer. “You are not qualified,” the GM said. Hui replied: “I can make it. I can become an accountant.” Then he stood up and left. His determination must have made an impression because Peat Marwick eventually gave him a job.

Thus began a professional journey from audit trainee to controller to CFO to Managing Director Fuji Xerox (Hong Kong), one of the Japanese giant’s more successful businesses. The 850-staff Hong Kong unit has achieved 3.7% five-year compounded annual growth rate. Revenue growth in fiscal year 2013 was around 4.5%.
Hui had not aspired to become a chief executive. He was 52 when he became CFO of China Operations and Vice President of Finance, Greater China Operations, in 2008. “I had thought I would retire as CFO,” he says.
That he did end up as MD shows the growing trend of finance becoming a platform to the top job. As a finance executive, Hui went beyond accounting, compliance and reporting to also focus on business partnering and support for sales and marketing, as part of Fuji Xerox’s culture of teamwork.
It was not a deliberate career strategy, but Hui’s embrace of a wider remit for finance apparently impressed the board and other executives – and serves up useful insights to CFOs in other organizations about their own career progression.
From Practice to Business
Hui actually stayed with his first job with Peat Marwick for just a year. He decided to attend university and complete a three-year diploma course in accountancy at what is now the Hong Kong Polytechnic University. He returned to KPMG as audit assistant in 1984 and was a member of the team that audited Fuji Xerox.
In 1989, Hui passed the CPA exams in 1989 and became an associate member of the Hong Kong Institute of Certified Public Accountants and of the Certified General Accountants’ Association of Canada, and a full member of the Chartered Association of Certified Accountants in the UK. That was also the year he was asked to join Fuji Xerox to help set up and run a new Equipment Financing Department.
Until then, the company was using a third-party bank to arrange financing for clients that wanted to purchase Fuji Xerox machines. The thinking was that doing the financing in-house would allow the company to better control the program and also help it serve customers better. At that time, leasing accounted for 20% of the business; today, it is over 90%.
The job was a baptism of fire for someone who used to be an accountant in practice. “I knew how to audit, I knew the accounting policies and processes, but I knew nothing about the business side,” Hui recalls. As deputy leasing manager and later the leasing manager, he had to set up systems and processes, including accounts receivable and pricing structures.
Hui was also expected to create financial packages to offer to customers and support marketing and sales in selling them. “For me, this was the start of the concept of being a supporter to the user, to the customer,” he says. “This built for me the concept of supporting people.”
Finance in China
After five years with Fuji Xerox, where he progressed to Finance Manager and China Finance Manager, Hui left in 1995 and set up accounting firm Hui and Hui, where he was audit partner. But barely a year later, he returned to Fuji Xerox to take up the post of Controller.
“It was a newly created position, a combination of financial planning and accounting,” says Hui. With the backing of his boss, the finance director, he continued his team-player approach. “For accounting, it’s good to advise on how best to handle [finance matters], not just say no to requests,” he says. “This [supportive approach] also built up my relationships in the company.”
In 2008, he was sent to Beijing to become CFO of China Operations and Vice President, Finance, of Greater China Operations. On paper, Hui was supposed to oversee financial management, accounting, compliance and control. “But on top of my normal job, I also decided to support the sales team.”
“I was trying to bring the concept of teamwork from Hong Kong to China,” he explains. “In Hong Kong, our people are more mature in handling customer requests, information or proposals. But even the sales team in China was still green.”
He focused particularly on helping sales understand the mind-set of MNCs, based on his interactions with top managers of global companies in Hong Kong. “I helped them understand how [MNCs in China] are thinking about their needs, and how to talk to their decision-makers about our offerings,” says Hui.
It was a tough job. China was a fast-growing market and the 80-strong finance organization was soon overstretched. Hui recruited more team members, which was not easy because experienced finance talent was – and still is – at a premium in the vast country. But he eventually brought up the finance organization’s strength to around 100.
“I needed to help people streamline the collections process and strengthen the accounts receivable management,” says Hui. Fuji Xerox has a standard chart of accounts across the enterprise, but the CFO realized the finance team needed to be educated about it to ensure proper execution of the accounting policy and processes.

“My managing style is to trust people. And I encourage innovative ideas.”

“In China, the automation is quite good,” he says. “What you need to focus on is the people, how to help them execute. Why do we have this policy? Why do we need this kind of control? It’s more the education part.”
He also looked into finance and accounting outsourcing. Fuji Xerox has a regional Shared Services Center in Malaysia. Accounts payable in China is now being handled by the regional office, but most other processes remain in the mainland.
“A/R has to be in China,” says Hui. So are most other processes, including tax, because China has its own accounting standards. While strides have been made to harmonize Chinese national accounting standards with IFRS, significant differences remain.
As CFO, “you need to build relationships [with regulators and government agencies] in China,” Hui adds. “This helps you understand the customer and ensure your accounting policy and Chinese custom are aligned.”
Rise to the Top
In 2012, Fuji Xerox reorganized its China organization, a move that “underscores the increasing importance of the China market to the overall business,” it said in a statement at that time. Jo Masataka, Hui’s boss, was given responsibility for all Fuji Xerox entities in China. He was named Chairman of Fuji Xerox China Limited, Chief Representative of Fuji Xerox in China, and President of Greater China Operations.
Joseph Yu, Managing Director of Fuji Xerox Hong Kong, was moved to Beijing to take over Masataka’s previous position of President of Fuji Xerox China. Hui was asked to return to Hong Kong and fill Yu’s old position. “There was an opening in Hong Kong, so by notice, I became the MD,” says Hui.
The transition has been smooth. Hui has worked with most of his senior executives, many of whom have been with the organization for more than a decade. “I know them,” he says. It helps that in his previous stint in Hong Kong, he made a conscious effort to be supportive of everyone on the team.
“My managing style is to trust people,” says Hui. “And I encourage innovative ideas.” He also works very closely with Wendy Lee, the company’s long-time Director, Finance and Legal, whom Hui has known for more than ten years.
She is the navigator, says Hui, “the GPS of the car.” Lee’s role is to “tell me where we are, what’s the gap between where we are and where we want to be. And are we going in the right direction?”
The finance director is responsible for reporting the figures, Hui adds. “As MD, I own the figures. In the past, I was responsible for reviewing the figures only, now I own the figures. I am accountable for them.”
The right direction, at the moment, is continuing Fuji Xerox’s evolution from a hardware seller to a provider of business solutions packaged with the hardware, including the area of documents management outsourcing. “We are using the same solutions we are selling, so we know how the CFO can make use of them to gain visibility and control over print services, for example.”
Another important initiative is sustainability. Like other Fuji Xerox companies, the Hong Kong unit is focused on being environmentally friendly. The enterprise has a “Zero Landfill” policy, meaning that it recycles virtually all parts of its machines – the recycling rate since 2010 is 99.9%.
Used Fuji Xerox machines, spare parts and cartridges are collected in the 33,000-square-feet Tsuen Wan Recycling Centre in Hong Kong’s New Territories, where they are disassembled and sorted into 74 categories. The parts are then shipped to Thailand for recycling.
“It’s actually a cost for me,” says Hui – collection and shipping are not cheap. The recycling centers try to break even (they sell the recycled raw materials to Fuji Xerox and third parties), but overall, the recycling initiative is a cost to the company. “It’s not that big,” says Hui. “It’s affordable.”
The point is that Fuji Xerox is doing its part in helping clean up the environment and contributing to the social good. “And it is a differentiator,” says Hui. “This makes us unique in the industry.”
Lessons Learned
What advice can Hui give to other CFOs looking at their own career development? He does not presume to tell anyone what to do, but prefers to recount what he did that, even without deliberately planning it, brought him to the top.
One is for CFOs to be involved in the business, not simply staying put in their corner office and limiting themselves to reporting, compliance and control. At Fuji Xerox, senior executives including those in finance are encouraged to go out and interact with customers.
“It’s good to understand their needs,” says Hui. “For example, when I was in finance, customers will tell me how we can improve our invoicing and our collection process. By listening to people, you will learn how you can improve in your area as well as what’s happening to the company.”
Hui personally thinks that an MBA is a useful qualification. He completed his executive MBA from Richard Ivey Business School in 2003. “Every five years I would check: What should I learn in the next five years?” says Hui. “The MBA course was good for me to broaden my knowledge.”
The soft skills, including communications, presentation, negotiation and persuasion, are also important. Above all, Hui stresses teamwork and business partnering.
Even if he did not become MD and instead ended his career as CFO, one gets the impression that he would have been satisfied with his career knowing he had been a supportive, and therefore valued, team member and business partner.
About the Author