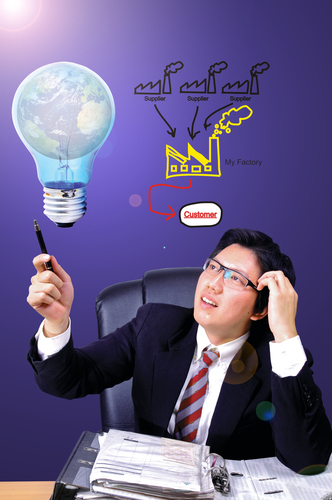 Companies have focused more on the risks posed by global supply chains since 2011's earthquake in Japan and floods in Thailand left manufacturers scrambling for parts. One common response: increase the manufacturer's number of suppliers in case a natural disaster or some other problem interrupts the flow of resources that a manufacturer needs.
But a recent economics paper argues that companies' efforts to strengthen their supply chains by diversifying their sourcing may be counterproductive. It can end up making the supply chain more fragile for an entire industry.
Simplistic rules of thumb
The study, Multi-Sourcing and Miscoordination in Supply Chain Networks, was written by Kostas Bimpikis, Douglas Fearing and Alireza Tahbaz-Salehi.
It posits a situation where manufacturer purchases its parts from two suppliers. Each of its suppliers also diversifies by sourcing from two suppliers, but both of them are using the same two suppliers.
So a problem at one of the tier two providers will hit both of the manufacturer's direct suppliers, leaving the manufacturer without an unaffected supplier of the parts it needs.
“Even though supplier diversification reduces the probability of a severe disruption at each firm individually, it leads to a more intertwined supply chain, which may exacerbate the extent of risk propagation further downstream,” according to the paper.
“Simplistic rules of thumb, like 'have two suppliers per component,' are not necessarily leading to resilient chains,” said co-author Bimpikis, an assistant professor of operations, information and technology at the Stanford Graduate School of Business.
Other approaches
A recent Deloitte report on companies' efforts to create "anticipatory supply chains" suggests firms are working on many fronts to guard against disruptions to their supply chains.
According to Deloitte, 59% of  companies it deems as “supply chain leaders” were moving to source from more vendors, as were 36% of companies overall.
But the supply chain leaders also cite other approaches. These include collaboration with key suppliers, efforts to increase visibility, and more flexible transportation policies. Indeed, “sourcing from multiple vendors” is way down in this list of action steps.
What Supply Chain Leaders Do

Source: Deloitte Development LLC, 2014
The paper by Bimpikis, Fearing of the University of Texas, and Tahbaz-Salehi of Columbia emphasizes the importance of manufacturers' understanding "the entire structure of the supply network" to minimize the possibility of "disruptive events."
It suggests that manufacturers could move from bilateral contracts with each supplier to "cross-contingent contracts whose terms depend on all suppliers' outputs."
However, Bimpikis acknowledged that the proposal that manufacturers use cross-contingent contracts isn't very realistic. "If you do not even have information about your suppliers' suppliers, how would you write a contract with them?" he said.
Direct sourcing
One possible response to the paper's message about the risks posed by interwoven supply chains is direct sourcing, in which a company provides the materials that its suppliers need, Bimpikis said.
"Instead of my supplier buying input from another firm, I as the manufacturer buy the material," he said. "So in some sense I gain control over the sourcing for my supplier."
Manufacturers can also try to gather more information about their suppliers' suppliers. "If I work closer with my supplier and I know who she's supplying from, I can potentially shield myself from such disruptive events," Bimpikis said.
About the Author
Susan Kelly writes for FierceCFO in the US, a sister publication of CFO Innovation. Click here to sign up for the FierceCFO newsletter.