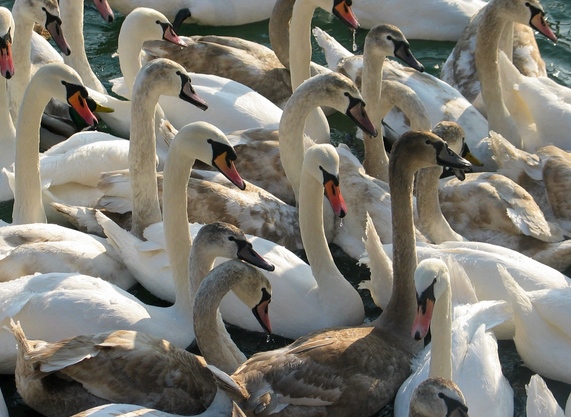 In recent years, organizations and industries have sought to better anticipate "black swan" events, those highly improbable incidents with devastating consequences that no one sees coming.

Now, gray swans are starting to spread their wings across global markets and economies.

Gray swans are events that can have equally significant results as black swans, but the outcomes are not so improbable, given surrounding circumstances. Consequently, they should have been recognized as having the potential to materialize.

These events can result in loss or opportunity. The more they are missed, the less likely they can yield a positive opportunity.

How best to prepare for gray swans may differ slightly depending on whether one is looking at an organization, a nation, or global markets

Two examples of gray swans have come in the past year. In June 2016, the UK voted to leave the EU, causing a sharp but temporary drop in the FTSE 100 and other global markets. In addition, the pound began a precipitous drop to its lowest point since 1985, falling from 1.49 against the US dollar to 1.20, a nearly 30% decline in seven months.

Meanwhile, in the US, the outcome of the November presidential election surprised analysts, investors, and executives, prompting Dow Jones Industrial Average futures to drop more than 500 points in the hours after the election. The Dow rebounded and by March had reached an all-time high, but other markets and currencies weren't so fortunate. For example, the Mexican peso fell sharply but had risen steadily in early 2017.

Donald Trump's presidential victory was "yet another blow to the pollsters and pundits following failures to predict the UK general election and Brexit outcomes," Scotiabank analysts Jean-François Perrault, Derek Holt, and Mary Webb wrote hours after the US election.

Both events, Brexit and Trump, had ample lead-up and two possible outcomes. Thus, the degree of surprise their outcomes elicited is a surprise in itself.

The lack of preparation by the groups who would see the actual outcome as a negative risk shows how much more sophisticated the world needs to become in terms of risk management.

How to improve readiness

How best to prepare for gray swans may differ slightly depending on whether one is looking at an organization, a nation, or global markets. In terms of organizations, large and small, here are some suggestions for managing gray swans:

In the case of Brexit, there were several days of negative reaction in the capital markets, many industry players had prepared for this gray swan materializing. For example, several insurers announced, after the June vote, plans to open additional offices in the EU to augment what they have in the UK, as a contingency.

The important point is that these insurers saw Brexit as a risk and were prepared to react quickly when the outcome of the vote was to withdraw.

At issue in the US election were matters related to taxation, regulation, and trade agreements. What business decisions were based on the incorrect expectation that will now have to be reversed? What strategies will have to be redrawn?

Businesses practicing enterprise risk management would have been following the steps outlined above and would have been prepared for either eventuality to some degree. No gray swan for them.

Given the scope and potential severity of gray swans, organizations should be aware of them while creating risk mitigation plans

Gray swans on the horizon

Many sources provide information on emerging or escalating risks that businesses could be and should be watching. These issues are apparent and knowable, hence they are not potential black swans.

They may be gray swans to the extent that businesses have become so inured to their existence that they do not pay adequate attention to them.

Here are some of the risk areas which tend to top most lists:

Given the scope and potential severity of these risks, organizations should be aware of them while creating risk mitigation plans and make sure that business processes are as robust as possible to offset the effects of these potential gray swans.

Al Decker and Donna Galer are authors of two books on enterprise risk management, including Enterprise Risk Management: Straight to the Value. This article first appeared in CGMA Magazine, a publication of the Association of International Certified Professional Accountants, which offers the Chartered Global Management Accountant (CGMA) professional designation. The association is a joint venture of AICPA in the US and CIMA in the UK. Click here to subscribe to the weekly newsletter CGMA Magazine Update.