What Property Collapse? The Myth About the End of the Chinese Miracle 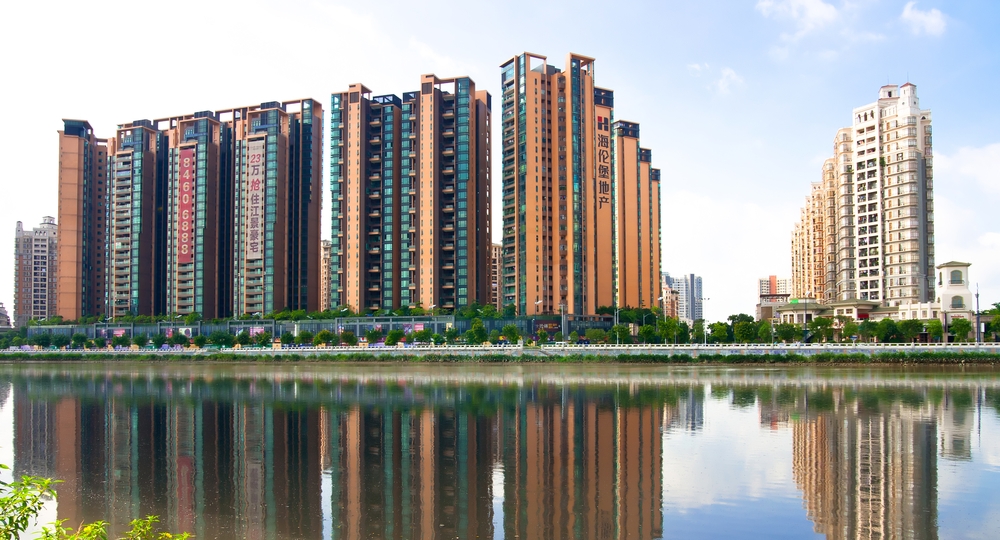 But as China’s technocratic leadership continues to steer the world’s largest nation through a complex multi-faceted economic transition to global leadership, it has also become essential to bring real insight to the country’s unique sector-specific dynamics.

Given the business importance of China’s market expansion and the country’s role as the primary driver of global growth and trade expansion, separating reality from media-hyped myth is becoming increasingly critical to global decision making.

As China’s property market bottoms and rebounds, a classic example of the gap between Western perceptions and reality will come into sharp focus.

The myth of a coming Chinese property collapse purports a massive surplus of debt-financed housing across numerous Chinese cities. Most of the locations seem obscure, with names many Westerners have never heard – despite the fact that most are bigger than the largest US cities.

A decline in Chinese housing purchases and prices last quarter again sparked wild extrapolation of recent Western experience onto a Chinese property market that is the mirror opposite of the US and Europe.

China’s “glut” of empty property: Nearly 15% of the US housing was vacant in 2008. About 20% of China’s 220 million urban housing stock – or 40 million units – are currently vacant. Ergo: collapse must be imminent in China and the impact must certainly be more severe and prolonged than the protracted decline in the US, posing a similarly life-threatening crisis for the financial system.

The first key China difference: 85-90% of China’s 40 million vacant urban apartment units have been sold, and are neither being offered for re-sale nor for rent.

Chinese developments are “pre-sold” when they reach 50-70% completion by the developer. Once the developer finishes his “bare wall” construction, the buyer-owner then hires a contractor, begins selecting plumbing fixtures, finishing walls, installing electrical outlets, etc.

The time between the “sale” and “occupancy” is at least one year and often closer to two years. Hence only 10-15% of the 40 million vacant units – or approximately 4-6 million – are available for sale or rent.

This is in contrast to the US, where some 34% of the vacant housing in 2008 was either for sale, in foreclosure or for rent.

Of China’s 4-6 million “available” units, around 2-2.5 million (or 1% of the housing stock) will always be on the market at any given time. Thus China’s actual “surplus” of urban housing is only 2-4 million units – far from the glut of 40 million apartments that worry naive Western analysts.

Basics of supply and demand: Chinese urban property is fairly straightforward. China has consistently built 7-8 million units annually. While the Western conventional wisdom would have you believe that there has been a dramatic acceleration of construction in recent years, the rate of growth has progressively slowed over the past decade.

lending beginning in 2009 instigated the recent slowing, as the table below shows.

At the same time, underlying demand continues to expand. Over the course of this decade, China will add more than 100 million urban households – or 10-11 million annually – driven mainly by rural-urban migration.

Hence the historical shortage that has been driving rapid housing price increases has now come into rough balance. Put in this context, China’s 2-4 million “surplus” units do not represent a threat.

Selective easing of mortgage restrictions and lower interest rates have led to an upturn in sales, which seem likely to end 2014 at the 10 million unit level.

Threats from speculators and debt: Faced with the simple facts of supply and demand, Western analysts quickly substitute another set of myopic assumptions: Purchases are driven by “speculators” and/or Chinese who cannot afford today’s high urban housing prices.

With speculators unable to “flip” these properties and household incomes constrained by China’s slowing growth, a Western-style crisis is still imminent.

While this accurately describes the US and selected European markets circa 2006, it has little to do with China’s reality. Research-Works, a Shanghai-based equity research firm that I advise, conducted a survey in two dozen Tier 2 cities. The key findings? 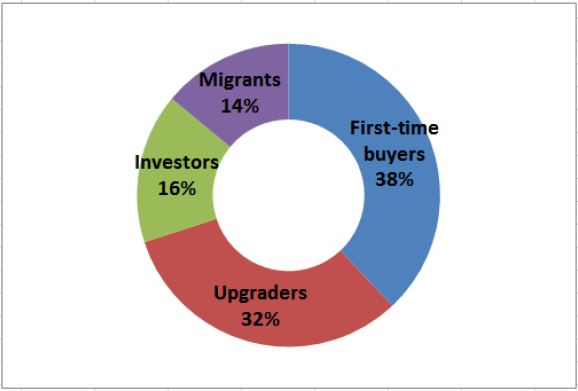 Only 16% of demand comes from investors, the majority of whom are of the buy-and-hold variety. That’s because, unlike US-style quick-flip artists of yore with their zero-down interest-only mortgages, Chinese investors are required to make a minimum down payment of 60%.

The remaining 84% of purchasers are owner-occupiers, whether first time buyers – the largest proportion at 38% – or families who are upgrading (32%) to larger more modern buildings with additional amenities and access to newly constructed transport infrastructure and commercial/industrial zones.

These buyers must make at least a 30% down payment, although the government has raised this to 40% in selected overheated markets. The debt structure of China’s property market is not at all like the US bubble: 20% of buyers pay the full price in cash, and across the entire market, only 50% of property is financed by debt.

While China’s shortage of urban housing supply – not excessive mortgage lending – drove higher property prices over the last decade, Westerners still struggle to escape another set of home-grown assumptions that they project onto China: the issue of affordability.

Lack of affordability: The Western conventional wisdom assumes that dramatic price inflation over more than a decade has made Chinese property unaffordable. Comparing average household income in a city to the price of new housing provides iron-clad evidence that this is another myth based on yet another set of flawed assumptions.

Chinese urban housing prices have indeed risen dramatically over the last decade. But so too have urban incomes (see chart below, left side). And now that property price increases have moderated as a result of government policies, property is becoming more affordable. 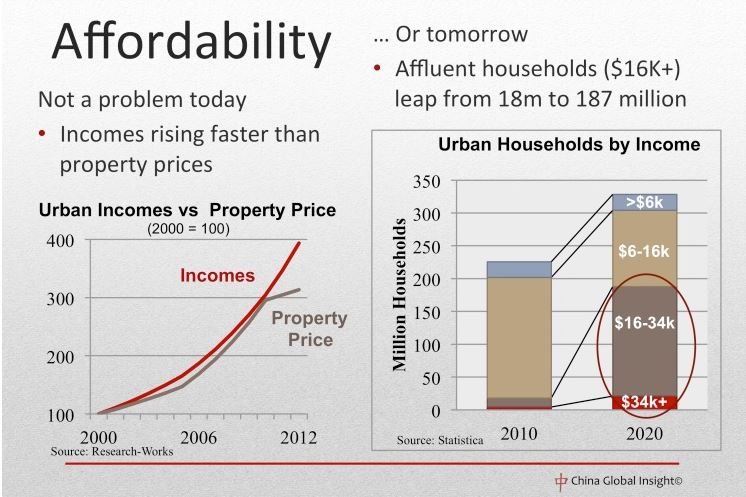 Perhaps more importantly in the longer term, overall growth in household incomes is creating a relatively affluent Chinese middle class. Unlike the US, where middle-class incomes have stagnated for more than a decade, the chart on the right shows a dramatic growth in Chinese household incomes. Between 2010 and 2020, 170 million new households are forecast to enter the U$16,000+/year income category.

Bringing a “Ghost City” to Life

With these fundamentals in mind, let’s visit Zhengzhou – that same scary ‘Ghost City” that the long-running US TV news magazine 60 Minutes toured recently.

To put this in perspective, that is the same as the four largest US states – California, Texas, New York and Florida -combined, but with only 15% of the land area. And Henan forms the crossroads of a regional population of 450 million people – the same as the US and Mexico combined.

The new district currently has a population of more than 1 million, and growing at 35% annually. A subway connection opened in 2013, accelerating the inflow of people.

As new phases of housing have been built here, they have generally sold out within 8-9 months. Now, with the economic slowdown, the sales cycle has been extended to 10-12 months. It typically takes a total of five years to reach full occupancy as the last units are completed and the new owners complete the outfitting and move in.

This progression – repeated across more than 150 cities in China with populations in excess of 1 million – explains the persistence of the myth of China’s looming residential property collapse.

A trip to Zhengzhou New District at any time in the last five or ten years would have yielded the same picture as today: several massive new phases of residential projects moving through a well-established path toward completion and occupancy.

The government’s engineered slowdown is real. A handful of property developers will indeed get stuck with poorly planned, designed or located developments in some of these 150 Chinese cities, just as their brethren did in Beijing, Shanghai and Guangzhou at various times in the last three decades.

As has been the case in the past, these developers will raise fresh funds or – if they fail to do so – will be acquired by better managed and more creditworthy firms.

It’s hard to turn real insight on Chinese property into eye catching or exciting headlines. It appears much easier sell the myth of an imminent property and debt crisis that sounds all too familiar to a Western audience.