Watch Out, China: The New India Bids for Manufacturing Supremacy

According to Deloitte’s Global Manufacturing Competitiveness Index, India is currently the fourth most competitive manufacturing destination worldwide and is forecast to become second only to China by 2018.

India’s appeal as a manufacturing and sourcing jurisdiction comes primarily from its labor cost advantage. However, the country’s poor infrastructure and complex regulatory environment have hindered the growth of the manufacturing sector in recent years.

As the BJP mulls an overhaul of antiquated labor laws and the introduction of China-style manufacturing incentives, India’s competitiveness is set to increase substantially

But now that Prime Minister Narendra Modi’s Bharatiya Janata Party (BJP) is in control of the nation’s first majority government in three decades, India may be poised to equal or even surpass China’s manufacturing edge. The new government has the parliamentary numbers to introduce policy and labor reforms, investment incentives, and improvements to the country’s outdated transportation and power supply networks.

Infrastructure and regulatory obstacles aside, India possesses nearly all of the key ingredients necessary to transform its economy into a manufacturing juggernaut. These include a demographic dividend, attractive domestic market, comparative advantage in shipping and labor costs, an inexpensive currency relative to the dollar, and low political risk.

As the BJP mulls an overhaul of antiquated labor laws and the introduction of China-style manufacturing incentives, India’s competitiveness as a manufacturing and sourcing jurisdiction is set to increase substantially in the near to medium-term.

The Indian manufacturing sector is commonly divided into organized and unorganized segments that correspond with what economists traditionally refer to as “formal” and “informal” sectors in developing economies.

Despite recent progress towards modernization, India’s unorganized sector still accounts for around 80% of all employment in manufacturing. Many developing economies typically have around 90% of all workers in the informal sector.

Accounting for 15% of India’s total GDP, the manufacturing sector has grown steadily in recent years as rising costs in China and elsewhere led foreign firms to seek out alternative locations for manufacturing and sourcing operations.

Between 2006 and 2011, India’s manufacturing sector sustained a compound annual growth rate of 17.1%, principally in textile goods, engineering goods, automobiles, and chemicals. At the current growth rate, the McKinsey Global Institute projects that by 2025, the sector will have a value of US$1 trillion, account for 25% of GDP, and create up to 90 million new domestic jobs.

India’s labor costs consistently rank among the lowest worldwide. According to the US Bureau of Labor Statistics, average labor compensation (including pay, benefits, social insurance, and taxes) in India’s organized manufacturing sector has increased only marginally in recent years, from US$0.68 per hour in 1999 to around US$1.50 per hour today.

That compares with average compensation of US$3 per hour in China’s manufacturing sector (a 20% year-on-year increase fueled by an annual 13% rise in China’s minimum wage). India’s labor cost advantage places it more in direct competition with emerging manufacturing jurisdictions such as the Philippines and Vietnam, rather than China, Thailand, and Malaysia. 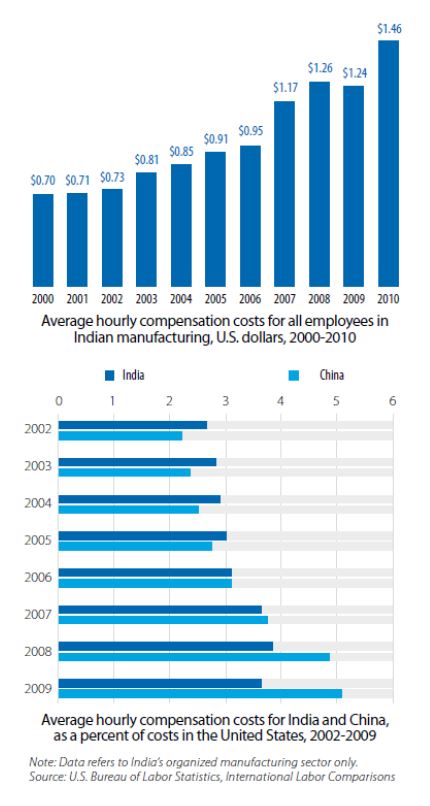 In addition to being extremely cost competitive, India’s nearly 500 million strong labor force offers manufacturers access to not only a substantial population of unskilled workers, but also a rich talent pool of English-speaking scientists, researchers, and engineers capable of lending cost-effective research and development support to manufacturing operations.

After more than 37 million workers chose to leave India’s agricultural sector for better-paying manufacturing jobs between 2005 and 2012, a slowdown in manufacturing activity last year (a 0.7% contraction) stranded a large segment of the population in low-wage, rural employment. Partly as a result of this contraction, the demand for manufacturing-based employment has never been higher.

Pressure has begun mounting for the Indian government to take concrete steps to foster the creation of enough manufacturing jobs (roughly 12 million per year) to absorb the country’s impending demographic dividend.

Over the next decade, two key policy areas – labor reform and retrospective taxation – are likely to determine the future appeal of India’s manufacturing sector to foreign investors. Initially created to enhance worker welfare, India’s outdated labor laws have often had the opposite effect by encouraging manufacturers to stay small and operate primarily in the unorganized sector to circumvent legal regulation.

As Narendra Modi settles into office, foreign investors are increasingly optimistic that his parliamentary majority will provide respite from the deadlock that has obstructed policy reform for more than three decades

India’s terms of work, hiring and firing, and working conditions are stipulated by the Industrial Dispute Act of 1947, Factories Act of 1948, and Contract Labor Act of 1970. These are among several prominent labor laws that continue to drive up costs for midsized firms and typically lead to the hiring of unskilled contract workers in informal sector operations.

Fostering a stable and transparent economic climate for foreign investment – partly through the abandonment of India’s controversial retrospective taxation policies – has been identified as a key area for reform by the Modi administration. With several multi-million dollar tax disputes still in limbo, standardizing India’s fiscal, tax, and policy regimes alongside the timely resolution of these disputes could deliver the business confidence needed to expedite the migration of manufacturing operations to India.

As Narendra Modi settles into office, foreign investors are increasingly optimistic that the BJP’s rare parliamentary majority will provide respite from the coalition deadlock that has obstructed tangible policy reform for more than three decades. If the BJP’s promised labor and foreign investment reforms come to fruition, the meteoric growth of India’s domestic market, combined with US$1 trillion in planned infrastructure investment and an ambitious National Manufacturing Policy (NMP), is set to reap significant dividends for the manufacturing sector as early as later this year.

Aiming to increase the sector’s share of GDP to 25% by 2020, the NMP outlines a roadmap for streamlining investment and taxation policies while improving core infrastructure such as railways, roads, and ports. With growth in India’s manufacturing sector outpacing China’s in June and reaching its highest rate of expansion since February 2013, it is more than possible that India’s rise has already commenced.

Dezan Shira & Associates, a specialist foreign direct investment practice that provides advisory services to multinationals investing in emerging Asia. This article was first published in India Briefing and was reedited for clarity and conciseness. For further details or to contact the firm, please visit www.dezshira.com.