Understanding the Implications as Kim, Moon and Trump Meet in Singapore 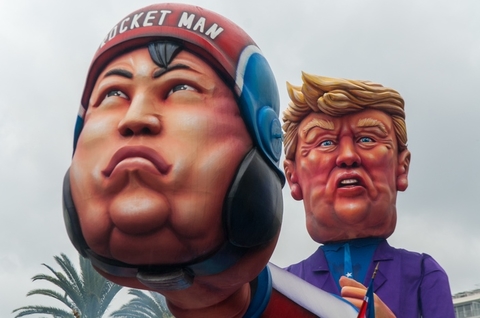 Making Korean bindaetteok is a messy endeavor. Beans are ground in a mill until they form a paste, scattering debris everywhere. The batter is then mixed with vegetables and formed into pancakes, which are fried in oil that spatters everywhere.

The process is hardly neat, but the outcome is amazing. Dipped into a little vinegar and garlic, the disks are delectable.

Relations between North and South Korea have been messy for the past 75 years. The countries were separated at the end of World War II and fought one another in the 1950s. As recently as six months ago, the North was executing tests of missiles and nuclear warheads.

This week, by contrast, the leaders of the two countries are participating in a summit meeting with the United States. Hopes are high for better relations, which could release a significant amount of economic activity.

The economic activity and potential that peace in the Korean peninsula would release is a tasty prospect for Asia, and for the rest of the world

A tale of two Koreas

The Koreas were rather evenly matched until early 1970s, at least in terms of gross domestic product (GDP) per capita. After that period, the two economies drifted so far apart it is hard to believe they were once at parity.

Despite the destruction of most of its industrial facilities during the Korean War, South Korea has achieved a lot in the last half a century, becoming the 11th largest economy in the world. South Korea is a member of the “trillion dollar club” of world economies with a GDP of US$1.5 trillion. North Korean GDP is estimated to only be around US$18 billion. 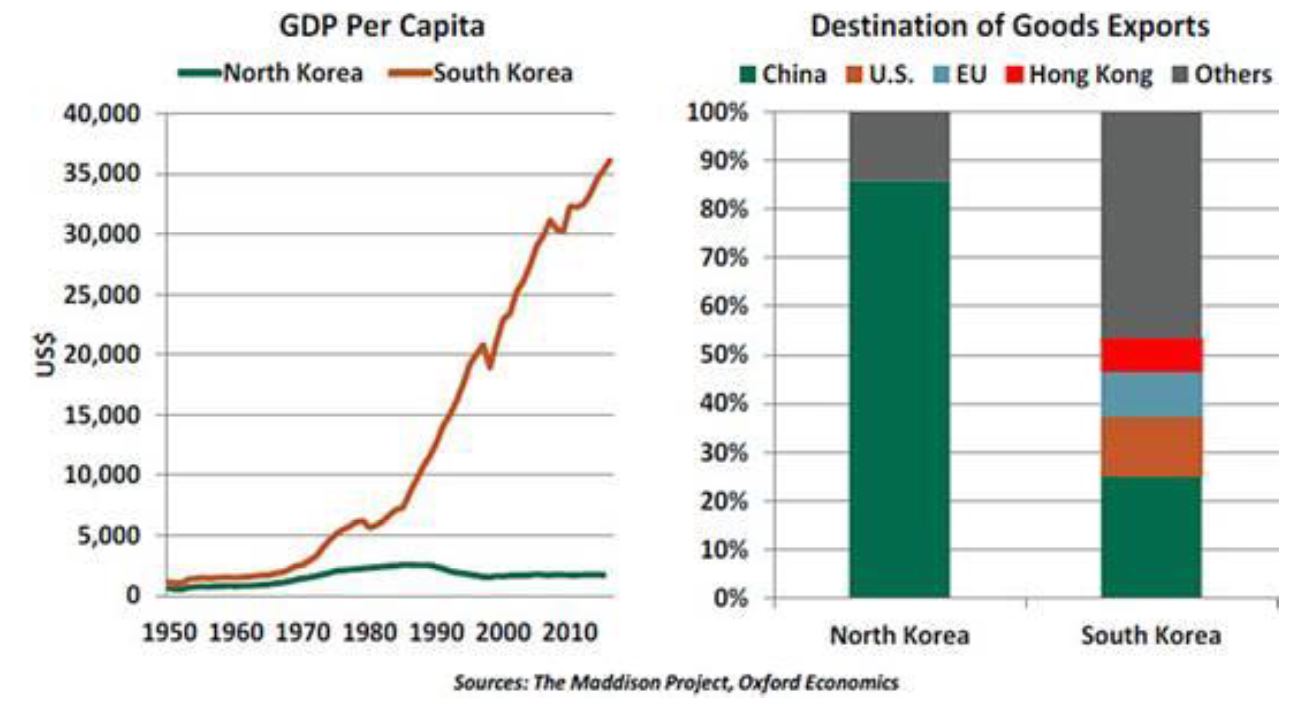 South Korea is also regarded as a regional safe haven. It carries a low and declining level of external debt alongside a sizeable current account surplus. The South Korean won was the best performing major currency in Asia last year.

By contrast, North Korea is considered one of the most isolated and backward nations in the world today. The country is facing tight international sanctions and severe economic distress. Conditions worsened when China limited oil exports to North Korea and suspended coal and textile imports from the country.

Although the North Korean economy continues to receive essentials and aid from international bodies, it will remain in a fragile state unless international sanctions are lifted.

While some in Washington, D.C., will want to take primary credit for the recent change of tone, China’s fingerprints are all over the emerging détente. Beijing was likely getting weary of defending North Korea’s aggression and acting as the country’s sole patron. China will need to conserve its financial resources as it works to reform its own financial system.

The Chinese use of influence with Pyongyang was an attempt to curry favor with the US administration. Bringing diplomatic issues to the table offers important perspective and may ameliorate some of Washington’s more severe instincts on bilateral commerce.

Sanctions have taken their toll and relieving them will be essential to lifting the country out of its malaise.

South Koreans are cautiously optimistic. To understand their perspective, first remember that families were separated when partition was initiated and cross-border visits have been carefully controlled. Citizens of the North and South are cousins, both literally and figuratively. The separation feels unnatural to many on both sides of the Korean Demilitarized Zone.

South Korea would be in an excellent position to help the North develop infrastructure if the atmosphere between them continues to improve. Its major companies would stand to earn substantial contracts, and the South Korean government has the ability to help finance the effort. (South Korea’s debt is a very modest fraction of its gross domestic product.)

Additional capital could come from Japan, China or multinational cooperatives such as the Asian Development Bank or the International Monetary Fund.

The United States and Japan (the States’ chief ally in the region) would both like to see the temperature surrounding North Korea reduced permanently. The White House would certainly like to trumpet a diplomatic success as the November midterm elections approach.

Some have even gone so far as to dream about reunification, but this seems a bridge too far. For one thing, China would not likely want to risk compromising its influence on the peninsula. For another, it would be difficult to define terms for financial consolidation; the option of establishing a single currency is much more complicated than it was for Germany in 1989. Thoughts of a single Korea, while exciting to some, are not realistic.

Getting to agreement on today’s critical issues will not be simple. Defining the meaning and pacing of denuclearization is not easy, as the recently-abrogated accord with Iran illustrated. Designing appropriate pacing for lifting sanctions will also require careful structuring. And let’s not forget the leaders of North Korea and the United States were involved in a volatile Twitter battle for many weeks, so setbacks are certainly possible.

Nonetheless, the atmosphere on the Korean peninsula has improved. An agreement is possible because it is in the interests of all the main parties to the negotiations. The economic activity and potential that peace would release is a tasty prospect for Asia, and for the rest of the world.