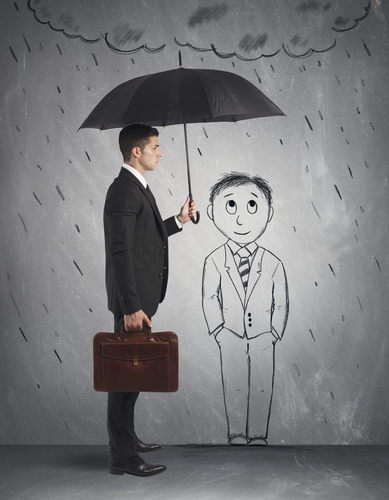 Tensions from gradual normalization
In recent years, very low interest rates and quantitative easing (QE) in several high-income countries led to large flows of financial capital into emerging markets, including in Asia, contributing to rapid credit growth and rising asset prices.
Markets rightly expect that tapering off of QE and normalization of US monetary policy will lead to a reversal of part of these flows as US yields rise. Indeed, this has in part already happened in 2013.
But the financial turbulence notwithstanding, sudden changes in US monetary policy are not on the agenda. First, the Fed is gradually reducing the pace of bond buying. The buying would stop later, conditional on sufficient growth and unemployment reduction. And the end of QE does not mean the end of easy monetary policy. Fed officials have gone out of their way in recent months to provide “forward guidance” about interest rates remaining low for an extended period.
Also, the prospective normalization of the US monetary stance will take place for a good reason: sufficient economic growth and unemployment reduction in the world's largest economy. That by itself should be good for the global economy and the export-oriented Asian economies.
Nonetheless, as noted, markets have reasons to be nervous. Some of the capital inflows were not financing long-term growth. Instead, they were of a short-term nature and not resistant to higher US yields.
Financial vulnerabilities built up in countries such as India and Indonesia because they ran up sizeable current-account deficits and relied on financial capital inflows to finance them. Moreover, the current risk-off mode causes a retreat to developed markets, which are perceived to be safer. The sentiment and tide are against EMs now and markets could potentially move down quite a bit more.
Why Asia may not succumb
Asian emerging markets have stronger macro fundamentals now and are not very vulnerable to a systemic macro crisis triggered by capital outflows. Most Asian emerging markets have relied substantially less on foreign capital to finance their growth in recent years than they did in the run-up to the Asian crisis.
In the mid-1990s, all countries we cover except China and Singapore ran current-account deficits. In 2013, only Indonesia and India did (see chart below).
Current account as % of GDP 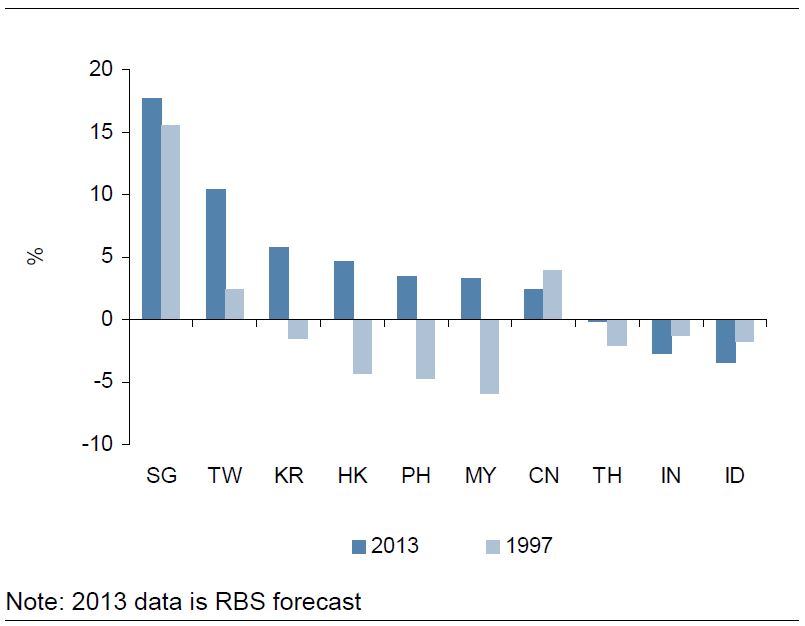 Sources: Haver, RBS forecasts
It is thus not surprising that Indonesia and India were the two Asian countries that got caught up in the taper turmoil in 2013. However, as Sanjay Mathur, our Chief Asia Economist, has stressed, both of them have responded with tighter macro policies and allowed currencies to weaken, thus absorbing some of the pressure. Indeed, current-account deficits have come down recently in both countries. In other words, they have already gone through some of the adjustment.
External debt indicators look less problematic. A current-account surplus could, in principle, still come alongside large capital inflows. On standard metrics, debt service indicators in most Asian countries are substantially less intimidating than they were in the mid-1990s.
In almost all Asian countries we cover, foreign exchange reserves are now much higher, relative to short term external debt, than they were in the run-up to the Asia crisis (see chart below). In India they are not, but even there the current level of this indicator suggests a substantially more comfortable situation than in the Asian crisis countries in 1997.
FX reserves as share of short term external debt 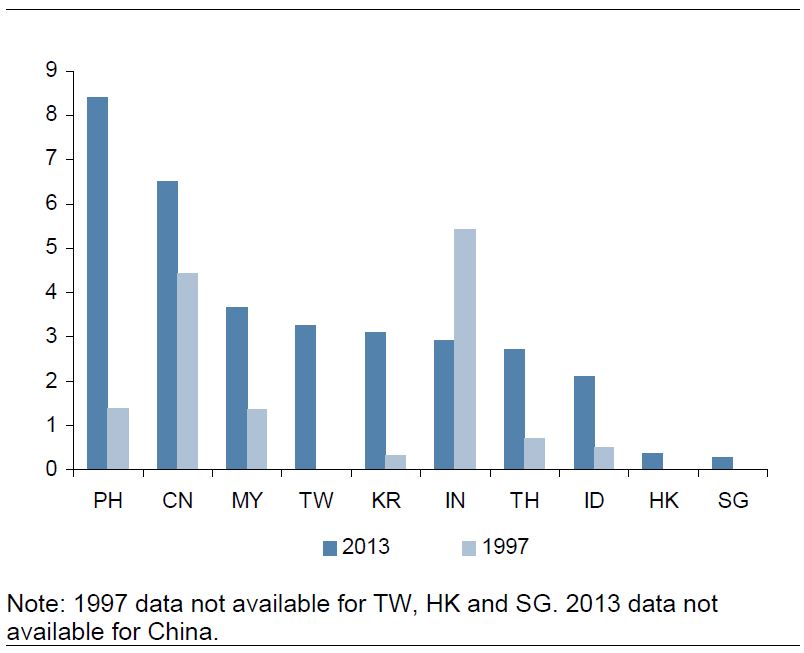 Sources: CEIC, RBS %
Policy regimes have also become more robust to external shocks. Importantly, currency regimes have adjusted. In the mid-1990s, almost all Asian countries we cover had fixed or managed exchange rate regimes, including the countries at the heart of the crisis: Indonesia, Korea, Malaysia, and Thailand. As capital started to flow out they initially defended their—often overvalued—exchange rates, spending precious FX reserves in the process.
Exchange rate regimes in Asia are now more flexible. That is why in 2013 the downward pressure in FX markets in India and Indonesia was absorbed to a large extent by exchange rate depreciations, rather than FX losses. Supervision and regulation on the vulnerability on the financial sector has also improved. And this time around less borrowing has taken place in USD.
As a result of these sounder macro policies, banking systems are less vulnerable. In most countries, the loan to deposit (LTD) ratio of banks is now quite a bit lower than it was in the mid-1990s, and also lower than in developed countries that ran into a crisis around 2008 (see chart below). This by itself does not guarantee all is safe in the financial sector, but it does indicate the banking system is less vulnerable to shocks such as outflows or falls in asset prices.
Loan-to-deposit ratios 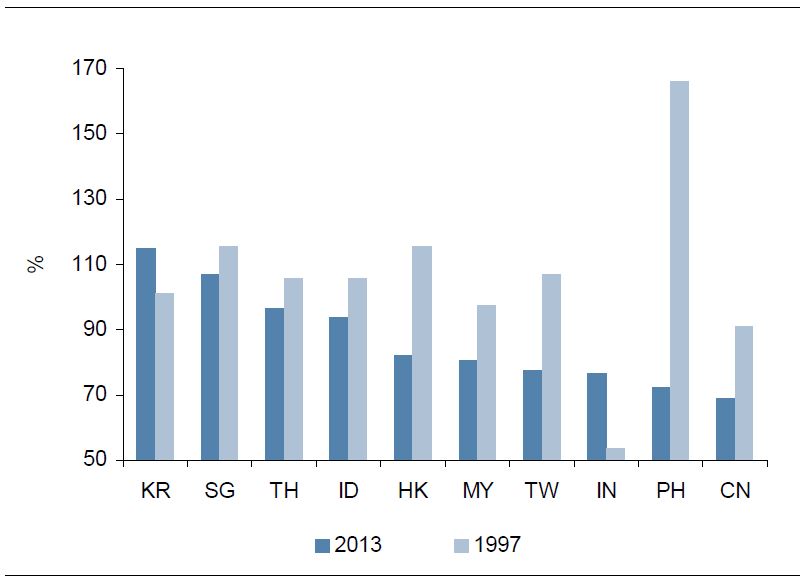 Sources: CEIC, RBS
India is one exception. The LTD there is higher now than in the mid-1990s. But that is mainly because it was low in the mid-1990s. At 77% now, the loan-to-deposit ratio of Indian banks remains moderate.
Korea is the other exception. Although it has come down in recent years, the LTD ratio in Korea is still higher than 100 and higher than in the mid-1990s. Korea’s banking system had ramped up lending prior to the global financial crisis of 2008 and has since then been going through a gradual rebalancing.
In spite of these improvements in macro fundamentals, Asian emerging markets are obviously affected by turmoil on global markets. Contagion and more market pressure may follow, especially in countries where foreign investors now hold a sizeable portion of local asset markets, as in Indonesia, Malaysia and Thailand. Nonetheless, in our reading, the region’s economies are more robust now, which makes a systemic macro crisis less likely.
What about the medium and long term?
In our view, long-term economic growth prospects remain much better in Asian emerging markets than in developed markets. These long term prospects have not changed. With their current levels of productivity and income still much lower, emerging markets still have a lot of room to grow.
Such a potential for growth does not necessarily lead to actual development. However, in the last few decades, Asian emerging markets have shown they are capable of tapping such long-term growth potential.
Meanwhile, trend GDP growth in the US is realistically not going to be much higher than 2% and lower than that in Europe, even though international financial markets are rightly enthusiastic that growth is picking up in these two markets. Thus, emerging markets are likely to remain the key drivers of global growth in the coming decades.
With short term risks moderate and long term upside substantial, in our view, the current bear market will at some point provide attractive opportunities for investors with a medium to long term horizon, given the still good growth prospects in Asian emerging markets relative to developed markets.
And China?
With controls on most forms of financial capital, China did not see major inflows of capital triggered by QE. As a result, there is not much mobile foreign financial capital that wants to retreat from China. China’s risks are domestic in nature.
There is no need to become overly concerned on growth in China and the likelihood of a systemic financial crisis remains very low, in our view. The combination of rapid credit growth, probably deteriorating overall loan quality, monetary tightening and reforms has led to higher risks of financial problems and credit defaults.
We are currently looking closely at how policymakers balance the need to rein in credit growth and the excesses in shadow banking with the desire to keep GDP growth above the bottom line of about 7%. We have various scenarios in terms of how much “organic” growth there will be this year and how the government calibrates its monetary and credit policies, with a different growth-risk balance.
However, in any case, in our view, macro stability in China is not threatened by the financial risks any time soon. That is why we think the government has the policy space it needs to ensure its bottom line on growth, while retaining financial stability.
About the Author
This article is excerpted from “Top View Asia: Will Asian EMs Succumb?”, a report by Royal Bank of Scotland and affiliated companies that was published on 5 February 2014. It has been re-edited for conciseness and clarity. ©Copyright 2014 The Royal Bank of Scotland plc and affiliated companies (RBS). All rights reserved.