Rx for Singapore: A Weaker Currency as the Global Economy Deteriorates 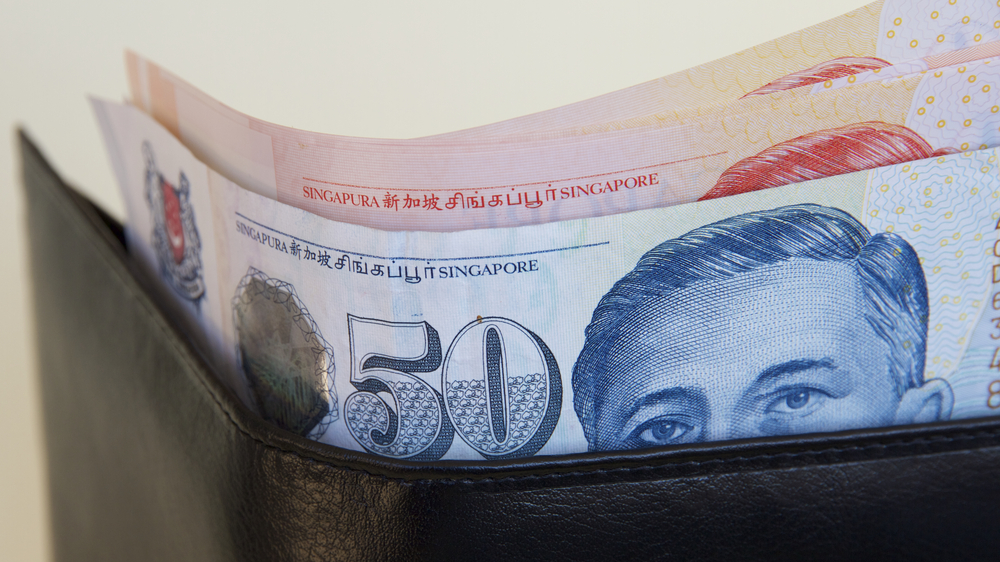 From a tiger performance during the last ten years (with the exception of a brief recession during the global financial crisis in 2008), Singapore’s economy is now having a hard time to grow.

The revised estimate of Singapore’s GDP growth in the second quarter confirmed that the economy has contracted sharply. At the same time, inflation has plummeted, and has become negative again as it was during the global financial crisis.

There are many reasons for this situation. First of all, Singapore is a very open economy and the global environment is not having its best moment right now.

Second, Singapore has become increasingly dependent on China, not only as part of the Asian production chain for parts and components (especially electronics), but also as a provider of financial and tourism services.

The share of services in Singapore’s GDP has grown to 70%, while the share of goods has dropped to below 30%. 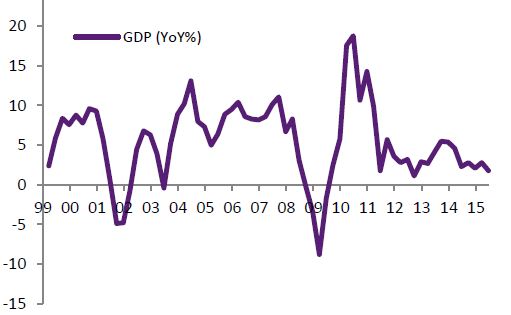 This appreciation of the Singaporean dollar comes at a difficult time in which several of the country’s key industries are decelerating. The petrochemical industry, which accounts for 18% of Singapore’s exports, is suffering due to falling oil prices. Regional demand was sluggish as economic growth in Asian markets, such as China and Indonesia, declined during the quarter. 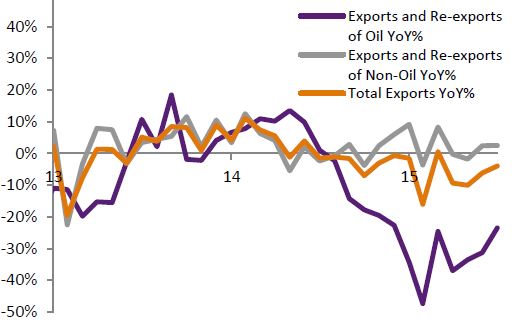 Second, financial services have reversed momentum since it surged during the fourth quarter of 2014. IPO activity has contracted. Forex turnover has come down. The fund management industry has seen a sequential pullback, as the one-off effect of sizeable 2014 performance fees has dissipated.

The number of tourists from Indonesia, who account for 18% of Singapore arrivals, has fallen 14.2% year-on-year in June

Third, tourism, an industry that is extremely sensitive to exchange rates, is feeling the pinch. Economic growth in the two key sources of tourists (China and Indonesia) is decelerating. The Indonesian rupiah has depreciated quite a lot. In addition, a key competitor for Singapore, Australia, has let its currency depreciate quite aggressively.

Will Chinese Tourists Continue to Visit? 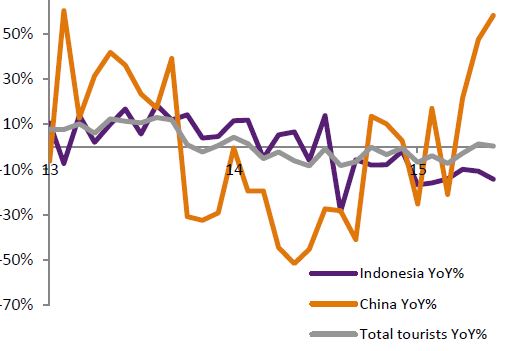 The number of tourists from Indonesia, who account for 18% of Singapore arrivals, has fallen 14.2% year-on-year in June. At 13% of total arrivals, Chinese visitors represent Singapore’s second-largest market for inbound tourists. Arrivals from China have so far seen spectacular growth, but this was during the period when the renminbi was virtually pegged to the USD.

The question is what will happen during the second half of 2015, as China’s economic growth continues to decelerate. The RMB depreciation, even if moderate so far, is another big question mark for the future of the Singaporean economy

In the current circumstances, with the huge amount of uncertainty in the Chinese economy, depreciation pressures in the emerging world and a waning economy domestically, it seems wise for Singapore to act preemptively and reduce the appreciation of the Singaporean dollar.

Given Singapore’s pitch for a relatively transparent exchange rate regime, the most elegant way to do this would be to reduce the slope of the band in which the Singaporean dollar is allowed to fluctuate.

Supporting such measure with an interest rate cut seems an ideal way for the Monetary Authority of Singapore to push the currency to a more growth-enhancing level, at a time where inflation is non-existent and, thus, not a constraint for MAS.

Alicia Garcia Herrero is Chief Economist, Asia Pacific, at Natixis, the second-largest banking group in France. This article was re-edited for clarity and conciseness.

Copyright 2015 by Natixis. All rights reserved.