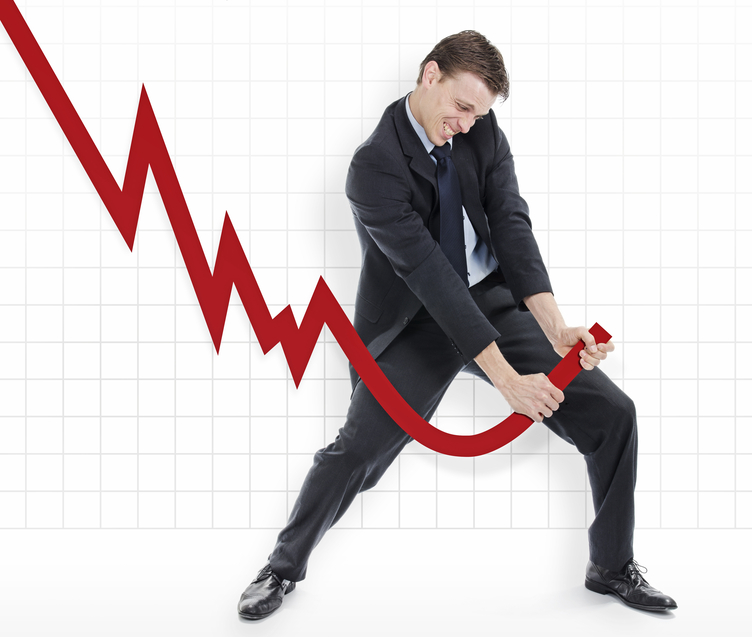 World GDP is forecast to grow only 2.4% in 2016, weighed down by emerging market weakness and increasing uncertainty.

The modest eurozone recovery is expected to continue with 1.6% growth this year, but this will likely be revised down in coming months due to the effects of the EU membership referendum in the UK.

Momentum is decreasing in both the US and UK, driven by weaker external conditions and deteriorating economic sentiment. This is amplified in the UK by the uncertainty arising from the Brexit vote. Our forecast for both in 2016 is 1.9% growth.

The effects of low oil prices, the slowdown in China and tighter financing conditions continue to weigh on prospects for many emerging markets this year.

Credit conditions are loosening further in most advanced economies while tightening in emerging economies. The insolvency outlook for 2016 has weakened for advanced markets, while remaining poor for major emerging markets.

Atradius forecasts a more modest 2.5% expansion in world trade. The main reason for this is our more bearish assessment of the impact of the transition of China from an industrial to a services-based economy

The world economy is now forecast to expand only 2.4% this year, down from a moderate 2.6% seen in 2015. The protracted fall in commodity prices, slowdown of China’s economy, and most importantly, uncertainty in US monetary policy have fueled a recent bout of volatility in the international financial markets.

Oil prices have continued a gradual recovery through June, oscillating around US$50 per barrel Brent. It appeared as though the global supply glut may finally be reducing: North American production is declining, supply from Iraq, Nigeria and Venezuela has been disrupted, and, Russia and Saudi Arabia had previously been rumored to have agreed to freeze output.

But it is unlikely that the rally will continue and we expect lower prices in the medium run. More US shale producers find it profitable to produce at these current prices and, as demonstrated in the most recent OPEC meeting in Doha, there is still significant risk of oversupply as major oil producers seek to retain market share.

World trade growth is expected to remain muted. The WTO has revised down its forecast for growth in the volume of trade in 2016 to 2.8%. Atradius forecasts a more modest 2.5% expansion. The main reason for this is our more bearish assessment of the impact of the transition of China from an industrial to a services-based economy.

But global risks – as well as domestic risks stemming from the UK’s vote to leave the EU and increasing security concerns related to Middle East tensions – have risen. The EUR/USD exchange rate has depreciated 3% since the referendum vote.

Economic growth was expected to stay relatively flat at 1.6% in 2016, but post-Brexit revisions are expected to be more restrained.

In order to address the waning economic outlook and avert deflation, the European Central Bank (ECB) cut interest rates to zero and expanded its expansionary monetary policy in March. Markets predict a further rate cut in Q4. Inflation fell to -0.1% year-on-year in May 2016. The ECB has indicated that further stimulus is a possibility to tame the current bout of volatility.

Expectations, however, are broadly stable. The European Commission’s economic sentiment index decreased only 0.2 percentage points in June to 104.4, with consumers and business managers showing optimism regarding the robustness of eurozone growth.

US and UK outlooks clouded by uncertainty

The 2016 forecast of UK GDP growth has been regularly revised downward, from 2.5% forecast in September 2015 to 1.9% in June 2016. We expect this trend to continue in July revisions, when the vote to leave the EU is accounted for.

Preliminary survey results as of June 28 from Consensus Economics show an average prediction of only 1.4% growth for the UK. The loss of confidence has caused pound sterling to experience a historic depreciation of over 11% since the outcome of the EU membership referendum was announced. The Bank of England also alluded to further stimulus measures this summer to counter the slowing in economic growth and heightened uncertainty.

However, the loss in consumer and business confidence will be partially offset by an increase in exports.

Emerging Asia will remain the fastest growing world region by far with 5.7% growth forecast. India’s economy is forecast to grow 7.6%. But headline Asian growth is 0.1 of a percentage point lower than in 2015 due to China’s economic slowdown

The buoyant, consumer-driven recovery in the United States has disappointed in 2016. Uncertainty surrounding the impact of financial turbulence and slowing emerging market growth has increasingly clouded the 2016 outlook.

The volume of exports fell 5% in April 2016 compared to April 2015 due to the relatively strong US dollar and waning external demand. This trend is likely to continue with further dollar appreciation expected as a result of the Brexit.

This new economic landscape is likely to temper the Fed’s appetite for a rate hike. Current estimates suggest that they will delay any further tightening until Q4 at the earliest.

Despite the general gloom, the labor market is increasingly strong; unemployment is low at 4.7% and the participation rate and wage growth are finally picking up. Similarly, inflation is up to 1.1% year-on-year in May.

Another difficult year for emerging markets

Aggregate growth across emerging market economies (EMEs) is forecast to rise 4% in 2016, the slowest pace since the onset of the global crisis.

Headwinds that have been growing through 2015 will persist this year. Growth continues to be weighed down by low commodity prices, uncertainty regarding the pace of US monetary policy normalization, rising (geo-)political risk, and concerns about domestic policy measures.

Emerging Asia will remain the fastest growing world region by far with 5.7% growth forecast. India’s economy is forecast to grow 7.6%, leading this figure.

But headline Asian growth is 0.1 of a percentage point lower than in 2015 due to China’s economic slowdown amid a rebalancing toward services and consumption-led growth.

The performance of China has a large impact on many other countries. Lower import demand in China, in combination with declining commodity prices, affects many economies in the region and commodity-exporting countries around the world.

Latin America is forecast to experience another GDP contraction in 2016 of minus-0.5%, suffering from low commodity prices as well as political scandals. The overall figure is weighed down by Venezuela (minus-8.7%) and Brazil (minus-3.4%). Recessions are also expected to continue in Argentina and Ecuador.

On the other hand, the situation in Eastern Europe is expected to improve. After a meager 0.2% expansion in 2015, regional GDP is forecast to rise 1.3% in 2016. The recession in Russia will continue (albeit at a slower pace: minus-0.9%), but Ukraine’s economy is forecast to grow 1.1% as the economy stabilizes from a very low starting point.

It appears that ECB policy is having some of its intended impact on credit conditions in the eurozone. Interest rates charged by banks on company loans have continued their downward trend since 2012. The 2016 Q1 ECB Bank Lending Survey shows that negative deposit rates are effectively boosting lending (though they are further hurting bank profitability).

Despite improving credit conditions, the insolvency outlook has deteriorated amid rising global uncertainty.

Low commodity prices are a major factor in rising insolvencies in Australia (+6%), Canada (+4%) and to a lesser extent the United States (+2%). Lower external demand for exports is another issue weighing on the business environment in the US as well as in many advanced countries including the UK (+2%), New Zealand (+2%) and Japan (-1%).

The UK’s forecast will worsen further due to Brexit-related market volatility. Countries with significant trade and investment ties to the British market will also experience negative revisions. The Netherlands (-10%), Belgium (-5%) and Ireland (-2%) are particularly vulnerable.

In emerging markets, credit conditions are still tightening, largely in response to increased global financial market uncertainty. Many emerging markets, particularly commodity exporters and those dependent on China, are forecast to see a rise in insolvencies.

The economic slowdown in China is expected to lead to a sharp increase in insolvencies there while recessions in Brazil and Russia will also lead to rising bankruptcies. 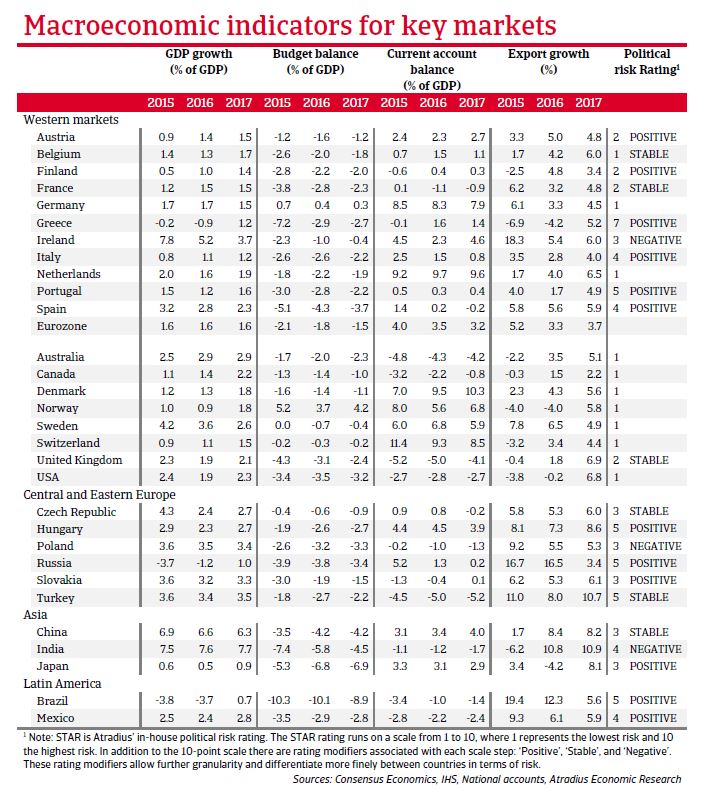 Headquartered in the Netherlands, Atradius specializes in trade credit insurance, surety and collections services. This article was excerpted from Economic Update: July 2016. Visit www.atradius.com for publications focusing on the global economy, including country reports, industry analysis, advice on credit management and essays on current business issues.