Industrial Production in the Asian Tigers: Will the Momentum Last?

Singapore just reported an impressive industrial production result, up 21.3% year-on-year in December. This sharp jump mirrors the trends in other Asian tiger economies South Korea and Taiwan, where electronic exports staged a strong comeback towards the end 2016.

The question is whether it will last.

Two reasons are driving the rebound in industrial production, especially in electronics in the Asian Tiger countries. First, after contracting sharply for more than a year, the base is very favorable for an upturn. The electronic cycle likely reached its bottom in 2016.

We believe the pick-up in industrial production will be sustained, although the rate will not be as impressive as recent numbers for two key reasons

The second reason for a rebound is stronger demand for products such as semiconductors due to the mobile phone production cycle. The North America semiconductor book-to-bill rose above 1 in December, suggesting that demand exceeds supply.

This should be positive for countries that specialize in semiconductor such as Taiwan, South Korea and Singapore.

Although positive for export-oriented electronic sectors, especially countries that maintain a cheaper currency to further promote global competitiveness, a sluggish domestic market will limit the sector’s impact on the overall economy.

In both Korea and Singapore, the rebound of the industrial sector is offset by worsening domestic demand, driven by higher interest rates, weak sentiment, and worsening demographic trends.

The Asian tigers – Singapore, South Korea, and Taiwan – ended the year with a big roar, at least from the industrial production and export growth perspective. After years of contracting and sub-potential performance, the pick-up is a great respite. The chart below shows industrial production growth for those countries, including Japan as it is an important part of the electronic supply chain. 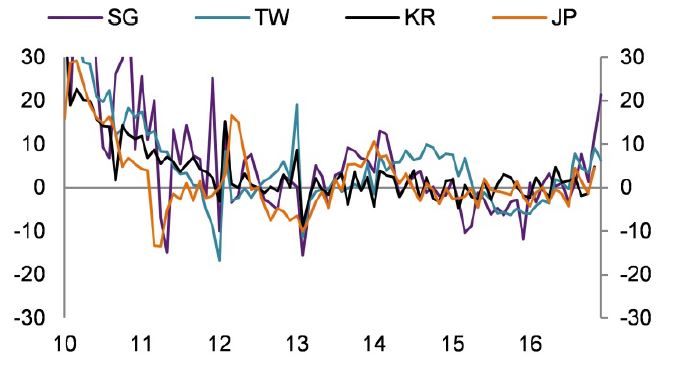 The pick-up is noticeable across the board, with Singapore leading the rebound. And it is not just industrial production. Exports, too, are perking up. However, as China’s import demand was subdued in 2016 and unlikely to improve in 2017, the question is what is driving the rebound and whether this is a one-off that will fade.

Will the momentum be sustained?

We believe the pick-up will be sustained, although the rate will not be as impressive as recent numbers for two key reasons.

There is a cyclical upturn from years of contraction – the low base of 2016 makes it incredibly easy to grow in 2017. Singapore and Korean exports, for example, have been languishing for about two years, dipping into deep negative.

With such favorable base, any modest upturn will show up significantly on a statistical basis. And this already proved to be true in Singapore, Korea and Taiwan.

The second reason is stronger demand in the US and the uptick of the tech cycle. The North America semiconductor book-to-bill ratio turned surprisingly above 1 in December 2016 – a key leading indicator of demand.

Although the rise in semiconductor-related exports is positive from a sectoral perspective, we do not think it will be enough to offset lackluster domestic demand in Singapore and South Korea

This upturn bodes well for the first quarter of 2017, despite a traditionally low season for tech demand. The chart below shows that semiconductor-related exports are picking up, which is one of key reasons for positive total exports in recent months.

Obviously, the importance of the rebound in this sector is dependent on how relevant it is for the economy. Semiconductor-related exports as a share of total exports are significant in Taiwan (20%) and Korea (19%). They are also substantial in Singapore (15%).

In South Korea, the rebound in semiconductor-related exports is large enough to help Samsung overcome its Note 7 scandal, with solid growth in Q4 2016. In Taiwan, the uptick has supported a GDP rebound and export performance. Singapore, too, felt the lift in Q4 2016, with a surprising upward revision to GDP.

Clearly, there is further room for growth in 2017, considering the demand leading indicator and a very favorable base. However, although this is positive from a sectoral perspective, we do not think it will be enough to offset lackluster domestic demand in Singapore and South Korea.

Households in Korea are dragged down by high leverage, subdued sentiment and a weak labor market. In Singapore, although wage growth is higher than CPI thanks to restrictions to immigration and low birth rates, structurally weak demographic transition, higher interest rates and weak real estate market will likely sap private consumption growth.

Thus, at least for Singapore and South Korea, there will be a two-speed economy, one in which domestic sectors will underwhelm while more export-oriented sectors will thrive on a great base, improving demand for their products, and a very supportive currency.

Natixis is the second-largest banking group in France. This article excerpted from Asia Hot Topics, which was issued on 26 January 2017, and was re-edited for clarity and conciseness.