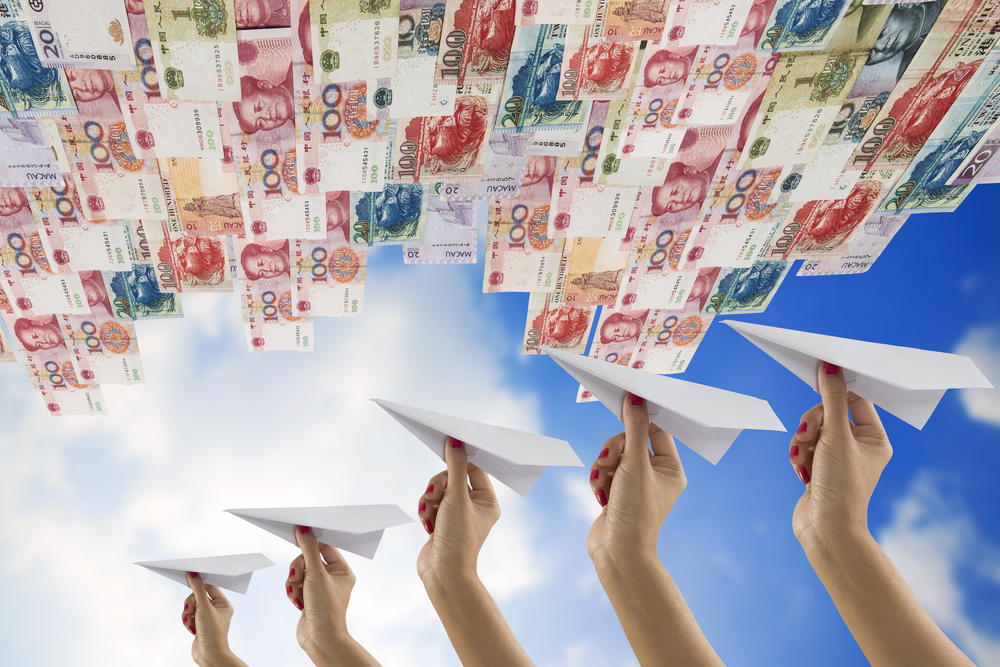 They explain how the recent turbulence in China’s equity markets and the credit expansion required for the government-led rescue effort could impact the economy, and discuss factors influencing the RMB. DeWoskin and Warnock also discuss steps CFOs can take to monitor the currency’s direction and to help mitigate the effect of a significant shift.

Whether sourcing from China or building market presence, it’s important for CFOs and other company leaders to understand that China’s currency may be at an inflection point very different from what they may have seen in the past

What is behind the uncertainty surrounding the direction of the Renminbi?

Ken DeWoskin: In 2005, China announced the RMB would trade within a band against a basket of major currencies, but recently, as the US dollar has gained strength against other major currencies, most notably the euro, the RMB has ridden up with it, impacting China’s export competitiveness in Europe and some emerging markets, as well as the price of many goods imported into China.

We now also have to factor in the estimates that anywhere between RMB2 trillion and RMB4 trillion in new credit may be needed to stabilize the A-share market, increasing China’s already mammoth money supply. After all, in the last seven years, China’s central bank added assets equal to the entirety of bank assets in the United States.

After the RMB’s eight-year climb between 2005 and 2013 against other major currencies, a plateau appears to have been reached.  The International Monetary Fund (IMF) has responded to China’s request to have the RMB added to its basket of Special Drawing Rights currencies with a postponement and specific conditions, pending more work on the RMB. In the meantime, the Chinese government is also investing hard currency to maintain stability in the RMB.

While China has traditionally tried to keep its currency competitive against other currencies to help boost exports, that policy appears to have given way to a policy weighted toward preventing a destructive level of depreciation of the RMB, reflecting China’s growing role as a big player in global capital markets and the country’s desire to promote the RMB as a reserve currency.

These and other major factors, such as preventing domestic inflation in key, imported commodities and decreased interest from outside investors in Chinese equities and bonds, appear to be obliging the People’s Bank of China to spend foreign reserves to maintain a floor under the Renminbi.

What is this costing China? Estimates run as high as US$20 billion on active days.

Why is this an issue for CFOs and not one left to their treasurers to handle?

Ken DeWoskin: CFOs are playing an increasingly strategic role in assessing investment opportunities and levels. Whether sourcing from China or building market presence, it’s important for CFOs and other company leaders to understand that China’s currency may be at an inflection point very different from what they may have seen in the past.

That means company leaders may need to reassess their underlying assumptions around the forces governing China’s currency policy and its outcomes, and how they monitor changes in the currency and risk mitigation efforts. Among the most obvious factors—a depreciated currency will do more to suppress import levels than to stimulate export levels. That has a direct impact on consumer demand and growth.

In particular, it is important to get a deeper understanding of the drivers and scale of the change in the dynamics underlying China’s currency policy. In the near term, even a relatively small shift in currency rates can have a big impact on the bottom line if you aren’t prepared for it. In the mid and long term, it can impact a broad range of investment planning decisions.

Even with slowing growth, China’s domestic market is still growing faster relative to other large markets, which is a big reason companies are willing to take on the challenges

George Warnock: Potential financial performance impacts of the uncertainty notwithstanding, questions over the RMB’s direction are a top-of-mind issue for CFOs and other leaders of MNCs operating in China. For instance, a weaker currency will likely impact pricing on many popular imported products in the China marketplace, especially in contrast to domestic competitors, from smart phones to baby formula, to fashion items.

The degree to which higher prices would impact demand and the growth of China’s domestic market is a complicated equation, but as overall growth slows in China’s economy, success in China’s consumer market is increasingly a function of market-share competition.

Even with slowing growth, China’s domestic market is still growing faster relative to other large markets, which, along with its sheer size, is a big reason companies are willing to take on the challenges and the learning curve required to succeed in China’s marketplace.

What are some of the dynamics influencing the RMB’s direction that CFOs should be aware of?

Ken DeWoskin: Forecasting the direction of currency exchange rates is particularly challenging in the case of the RMB.

First, its trading band is set by the People’s Bank of China. And while the off-shore version of the Renminbi, the CNH, is traded on external markets, the market rate is by no means entirely free. If the CNH becomes much cheaper in US dollar terms than the onshore version, the CNY, traders will likely buy the currency off-shore and sell it on the Mainland.

To keep the market-based CNH in relatively close alignment, the Chinese leaders already are spending foreign exchange on shore and off shore to maintain a floor under the currency and are likely to continue doing so.

Now, the choices are not easy for the authorities in China who have influence over the exchange value of the currency. They appear troubled by the fact that the Renminbi has become an expensive currency compared to the euro, making it very difficult to maintain any level of exports to Europe.

In addition, other countries in Southeast Asia and Latin America are much more competitive now on a currency basis, hence the talk of a currency war.

Since the onset of volatility in the A-share market, analysts have noted China’s shrinking position in US Treasuries, a steady monthly decline in foreign exchange reserves and a high level of capital leaving China. These are all pressures for, and indicators of, potential change.

Even though China’s foreign exchange reserves are still huge—in the US$3.5 trillion range—the People’s Bank of China may have less than US$1 trillion of immediate liquidity to support the A-share market and the currency. Additionally, that action in and of itself could weaken global sentiment on the Renminbi and the government supported institutions that are players in the intervention.

For example, China’s large state-owned enterprise brokerages, which have just increased their pledges to buy and support A-shares, are seeing their own share values hammered. That poses a dilemma: China has a difficult balancing act in terms of how much it is willing to spend to keep the RMB strong, making it that much more difficult for MNCs to predict the currency’s direction.

What can companies do to look out for and assess the chances of potential changes in RMB direction?

George Warnock: It’s important that companies understand the general direction the currency is heading over the next 12 to 18 months. There are various indicators that, if monitored together, can add up to a picture that can be very valuable if used as a planning tool.

We are seeing that steps, such as currency hedging with instruments like currency forwards, have become more expensive to put into place, so CFOs have to balance the value of those strategies against the rising cost

One indicator is the actual currency trading levels in both Hong Kong and Mainland China. One such gauge is the level of RMB versus Hong Kong dollars held in retail bank accounts in Hong Kong. If you live in Hong Kong, you can choose to keep money in your bank account in Renminbi or in HKD, which is a USD surrogate.

Other important indicators are the relative level of RMB trade settlement versus USD trade settlement, forward pricing of the RMB on various futures markets and the arbitrage difference between the CNH and CNY, and the reported changes in China’s US Treasury holdings and FOREX levels. The numbers for all of those indicators are regularly reported.

What are some steps or considerations that CFOs should be discussing with their treasurers to mitigate the associated risks?

Ken DeWoskin: Because this is a fluid and changing environment, now may be a good the time to perform a thorough review of how currency is managed, and the risk-mitigating instruments available to CFOs.

In general, companies with substantial Renminbi holdings can think through how they might offset the risk of significant currency rate swings with investment mechanisms or lending mechanisms and related hedging strategies. For example, in some cases, trading regulations allow companies to take a short position in RMB against a long position in other currencies outside China.

Many companies understand this hedging strategy is available to them and do make use of it, but some don’t and probably should consider it. By the same token, we are seeing that steps, such as currency hedging with instruments like currency forwards, have become more expensive to put into place, so CFOs have to balance the value of those strategies against the rising cost.

George Warnock: In cases where RMB can be converted to other currencies, it would be prudent to reduce exposure.

Companies also can revisit how they can hedge by looking at how they conduct their business. For example, CFOs can look at how they can align more of their costs to be domestic costs, in what currencies their cross-border transactions are contracted and how they can do financing within the marketplace in which they are operating.

It is interesting to note that recent articles have reported that Chinese firms with heavy USD and euro debt, most notably property developers, have chosen not to hedge. Citing the cost of hedging in the current environment at about 3.7%, they expressed their expectations that the RMB risk is far less costly and may indeed recover in the near future.

In terms of contracts and cross-border trading, some MNCs are more protected against currency changes than others. For example, some elements of a contract might be denominated in RMB and some in USD. Sometimes a transaction might be settled on China’s Mainland or settled offshore with a trading company that has the rights to take it into the Mainland and do the transaction.

At present, Chinese bankers have noted that the appetite for exchange requests from RMB into USD is at a multi-year high. That provides additional leverage for those who have US dollars to spend in transaction settlements.

CFOs may want to review the terms and conditions of contracts and cross-border agreements so that they can be prepared for any potential exposure to shifts in the Renminbi that could have an adverse impact.

The history of gradual exchange rate shifts in the range of 2% to 6%, which were typical of the RMB between 2005 until a few months ago, were more easily managed. But the recent rate of change can have significant bottom-line impact given the large size of the businesses many MNCs have built in China.

A useful first step may be to model the financial impact of shifts of this size or larger in a much more compressed time frame. The RMB has lost 4% of its exchange value to the USD in the last two months.

We are not currency forecasters, but recent shifts are important indicators of the potential size of changes that may lie ahead.