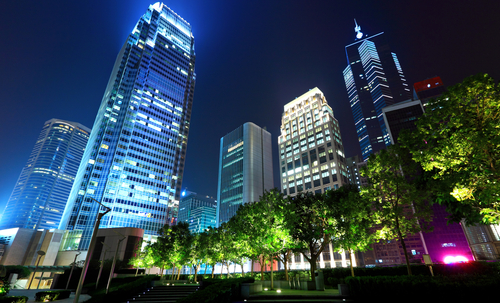 Following a property market boom that was largely driven by low interest rates imported from the US via the exchange rate peg, Hong Kong's housing market cooled in 2013. Having reached 30% in early 2013, property price increases have been decelerating.

So far in 2014, price growth has fallen close to zero. Property-related activity was rather subdued as well. Land sales and housing sales continued to fall in the past one year, although the pace of decline has eased somewhat recently.

The indicators suggest that Hong Kong's property market is becoming overheated, but the overall situation appears to be better than in the late 1990s

The government's macro prudential counter-cyclical policies have played a big role in the cool down of Hong Kong's real estate market. Among other fiscal and monetary measures, a 15% stamp duty for foreign home buyers was introduced in October 2012. The stamp duty on purchases of all types of property was raised in February 2013.

The key specific questions we will look at include:

Is the housing market overheated?

The most severe case of the bursting of a real estate bubble in Hong Kong was during Asia's financial crisis in 1998. After that, Hong Kong experienced six years of painful adjustment. The market started to normalize only in 2004.

Construction investment as % of GDP 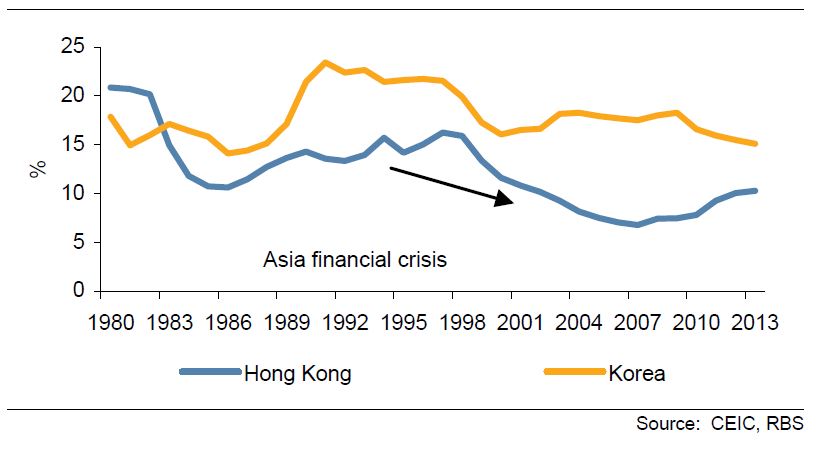 This evolution is different from Korea's, which also saw its housing market collapse in 1998. In Korea, the share of construction investment in GDP fell somewhat in the late 1990s, early 2000s and stayed rather flat in the past decade, but at a level higher than Hong Kong's.

Another indicator, the affordability index of mortgages, delivers a broadly similar message. It suggests that Hong Kong's housing market has become more heated in recent years, but the situation is less severe than before the Asia financial crisis (see chart below). 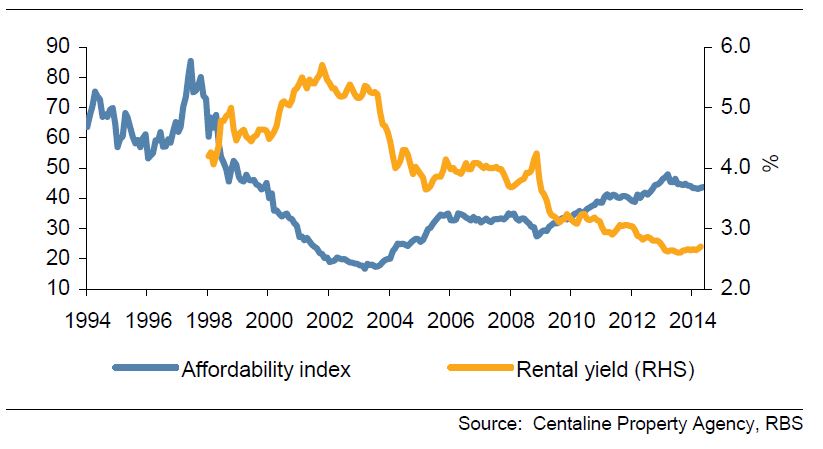 The performance of the housing market has a direct impact on the banking sector, mainly through changes in the credit quality of property-related lending

According to estimates by property agents Centaline, the affordability index decreased significantly from nearly 90 in 1998 to about 20 in 2003. It rose after that, reaching 45 in mid-2013, indicating that, on average, mortgages became less affordable in 2013, but were still more affordable than in 1998.

At the same time, rental yield had also been on a decreasing trend since 2002, in line with the lower interest rates. Rental yields fell from nearly 6% in 2002 to less than 3% so far in 2014, a historical low.

These indicators suggest that Hong Kong's property market is becoming overheated, but the overall situation appears to better than in the late 1990s. Moreover, the imbalances have moderated since 2013, with the implementation of policies to cool the housing market.

How about the banking sector?

During 2004-09, lending for property development and investment increased significantly alongside the housing market recovery, resulting in the rising share of lending to property developers in total lending (see chart below). 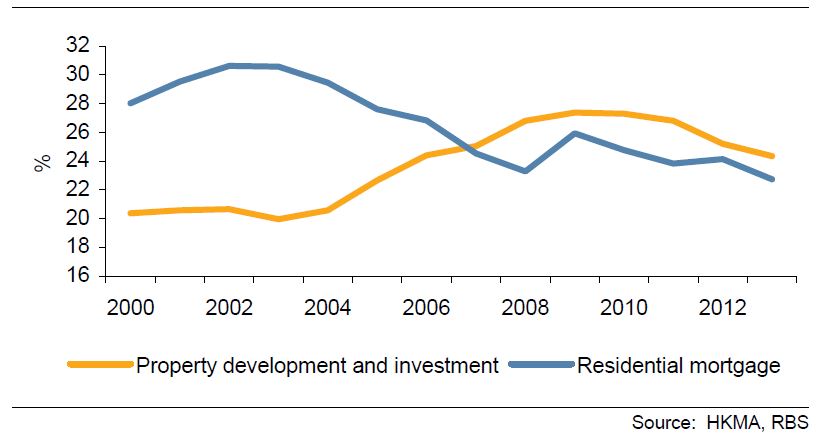 As a result, the total share of property-related lending, including residential mortgage, property development and investment, has been declining over the past five years. It recorded a 47% share in 2013, the lowest ratio since the Asian financial crisis.

In addition to being less exposed to property-related loans, banks in Hong Kong improved the quality of loans, as reflected in their decreasing negative equity. A loan is regarded as negative equity if its outstanding loan amount exceeds the market value of the mortgaged property.

The share of negative equity to total loans decreased from more than 20% in early 2000 to nearly zero in 2013.

Impact on the macro economy

In addition to the direct effect via construction, the housing market could affect the real economy indirectly through a couple of channels, namely the wealth effect and balance-sheet effect.

This transmission mechanism is particularly strong in Hong Kong because real estate is a key sector of the economy, and property is one of the most popular investments for Hong Kong residents.

In fact, we find that domestic consumption growth has a high correlation with property prices (see chart below). Notably, the recent deceleration of housing price growth was associated with slower growth of private consumption, although the decrease of consumption growth is less steep. 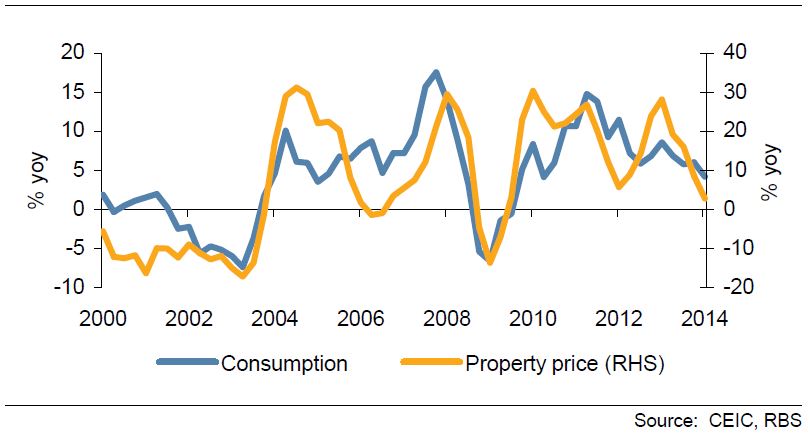 On the inflation front, property price fluctuations affect consumer price inflation via a direct channel through changes in rentals (housing rental has a share of 32% in Hong Kong's Consumer Price Index basket) and indirectly through aggregate demand.

Housing inflation tends to be more volatile than headline inflation, but the shape and evolution of the curves are roughly similar. From late 2013, headline inflation eased slightly, and we think this was in part due to a fall in housing rental growth (see chart below). 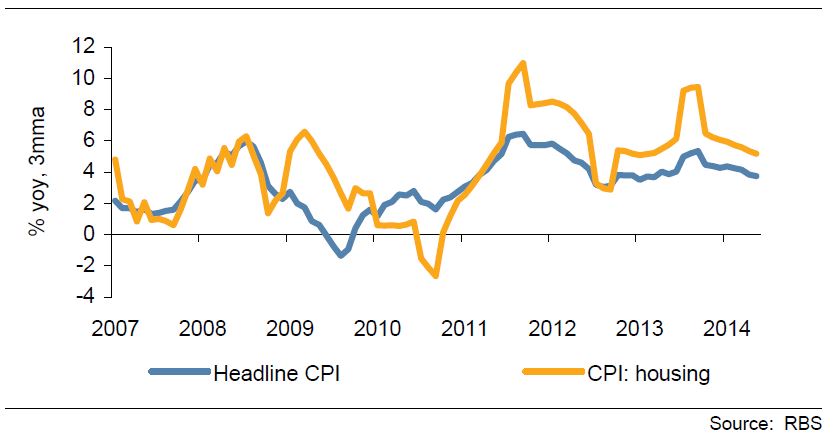 Overall, indicators of Hong Kong's property market are mixed. On the one hand, the market has been subdued for about a year and is facing additional downward risks with the gradual normalization of US monetary policy.

On the other hand, the market seems to be somewhat overheated since 2004, although we think it is healthier than it was in the late 1990s

This situation creates challenges for policymakers. If they are aiming to stimulate the property market, they would need to ease some of the current restrictions. However, such easing would also bring on additional risks, further pushing up housing prices and increasing the risk of a bubble forming.

In such a situation, depending on developments in the housing market and in the economy more generally, some easing may be considered necessary.

On the fiscal front, the Financial Secretary could reduce land sales and relax some requirements on the buyer's stamp duty if needed. Indeed, some minor modifications of policies were made in May 2014, such as extending the exemption period for second-home buyers.

But we do not expect a removal of the 15% stamp duty levied on non-permanent resident buyers. This may lead to a sizable capital inflow into Hong Kong's property market, which would add to overheating risks.

An easing of the tightening policies of the Hong Kong Monetary Authority is possible as well. The banking sector remains comparatively resilient due to the prudential measures implemented since 2009. The banks would still remain relatively healthy in case of a slight easing in lending to property developers and home buyers.

Indeed, the monetary authority has said it will consider removing some restrictions when conditions warrant.

Although monetary tools are relatively limited given that Hong Kong's interest rates follow US rates because of the Hong Kong dollar’s peg to the US dollar, the HKMA still has some options such as raising applicable loan-to-value ratio limits and the debt servicing ratio.