Hong Kong Versus Singapore: A Business Center Loses Its Way 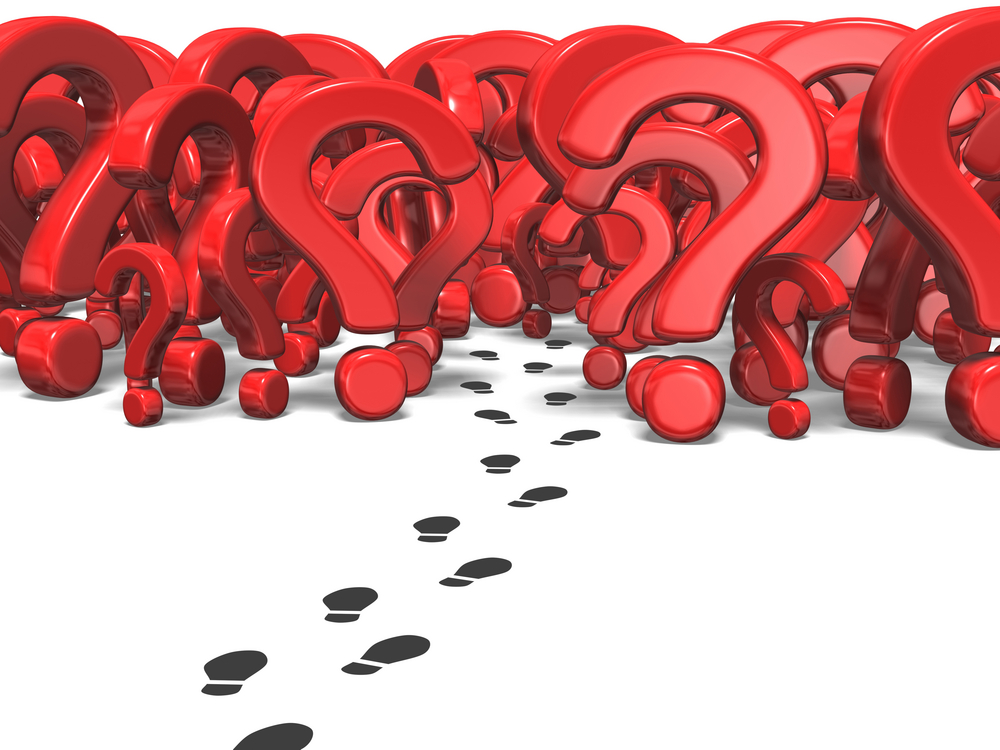 Singapore is the de facto financial and services hub for ASEAN, the Association of Southeast Asian Nations, which is due to establish an economic community by the end of this year. As a city state with such a remit, it is thus more pertinent to compare the dynamics of Singapore with Hong Kong, rather than China as a whole.

The evolution of China, especially as it flexes its economic power throughout Asia, means that Hong Kong and Singapore also compete for similar business

The two cities compete with each other. How do they stack up today?

Since Hong Kong’s return to mainland China in 1997, its positioning as a services hub has changed from focusing on all of Asia to being almost exclusively the gateway to mainland China, and a bridge between China and Taiwan. Singapore meanwhile has forged ahead with its ASEAN ties, and has become a regional hub for the ten-member Southeast Asian bloc.

Today a clear distinction can be drawn between the markets that Singapore and Hong Kong serve.

Although a little simplistic, the general rule of thumb that Hong Kong services the mainland, and Singapore ASEAN, contains much truth. This is particularly so when one realizes that Hong Kong is not included in the China-ASEAN Free Trade Agreement, although negotiations are now underway. Singapore is part of ASEAN.

The two cities have differed in their treatment of immigrant talent over the past 15 years as well. Hong Kong has become increasingly Sinicized, leading to the loss of some indigenous culture and the creation of some tensions between locals and mainland immigrants and tourists.

Singapore has been rather more selective and has made academic needs as well as wealth a prerequisite for immigration. While the Singaporean government has been criticized for being authoritarian, the city now generally upholds higher standards of living and public works than Hong Kong, where public roads are in danger of becoming in serious need of maintenance.

The irony of Beijing being seen elsewhere as authoritarian seems lost on many Hong Kongers when it comes to comparisons with Singapore.

However, the evolution of China, especially as it flexes its economic power throughout Asia, means that Hong Kong and Singapore also compete for similar business. Both cities, for example, are RMB trading hubs and both attract mainland Chinese companies for investment.

So from a business cost and trade perspective, how do they stack up? 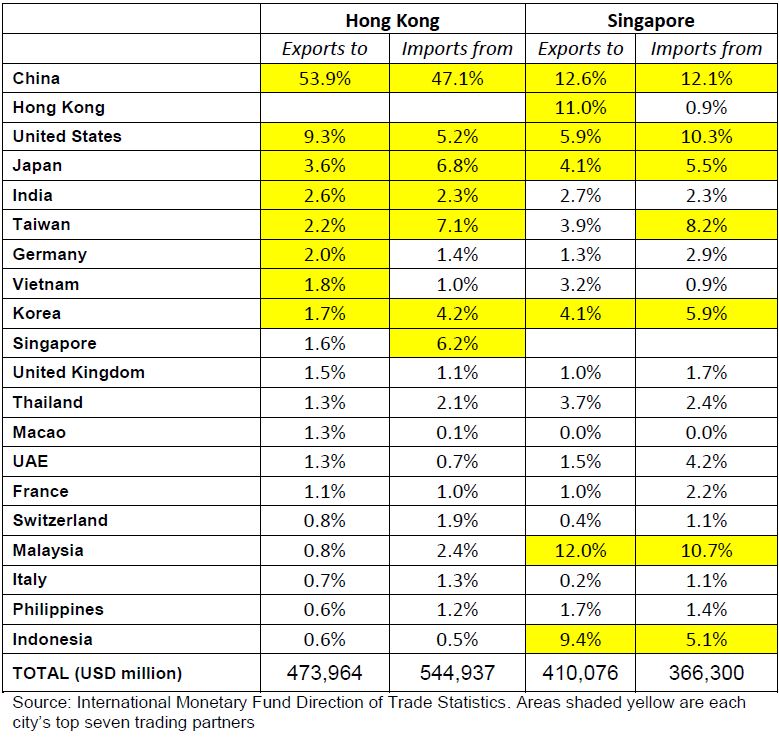 Hong Kong: The territory’s deep involvement with China is evident in the trade figures – in 2014, 53.9% of its exports went to the mainland, while 47.1% of its imports were sourced from there. The US is a far second, accounting for only 9.3% of Hong Kong exports and 5.2% of imports last year.

Hong Kong’s deep involvement with China is evident in the trade figures – 53.9% of its exports go to the mainland. Singapore is much less dependent on China

Hong Kong is deeply involved in the jewelry trade. Basic materials are reworked into designs mainly for the China market. It also functions as a transshipment hub for electrical products, also ultimately destined for the mainland China market.

Top quality products are often available in Hong Kong and at lower prices than in China, where a more stringent regulatory regime, especially concerning communications equipment, is in place.

China also imposes luxury tax surcharges on imported items. This encourages mainland Chinese entrepreneurs to purchase products in the city and return with them to China as personal items for resale.

This round-tripping to reduce mainland tax burdens on specific quality products has now become a major ‘tourism’ industry statistic in Hong Kong. However, given the very low value attached to jewelry workmanship, it is arguable whether Hong Kong is adding any real value in its processing industry.

Hong Kong manufacturing and processing continues to decline as factories move to mainland China. The services industry has therefore been growing. This encompasses mainly trade support services such as advertising, fairs, and marketing in addition in financial services. Much of these are aimed at mainland China.

It is also worth noting that many of the businesses registered as “manufacturing” entities in Hong Kong actually act as holding companies or service operations for mainland China subsidiaries, meaning that the services ratio of export trade in Hong Kong is probably higher than the official estimate of 30%.

Singapore has also been rather more driven in its pursuit of developing a services industry than Hong Kong (services account for 72% of total exports). Financial and business services dominate in Singapore, followed by IT, transportation and communications.

Singapore has been extremely active in signing bilateral Double Tax Treaties, with nearly 100 in existence. Hong Kong has about 30 DTA agreements. Singapore also has a free trade agreement with the United States; Hong Kong does not. But Hong Kong has an FTA with the European Union; Singapore and the EU’s draft FTA is awaiting action by Europe’s Council of Ministers.

Hong Kong’s policy as concerns DTAs and other agreements has been patchy over the past few years. Beijing is responsible for Hong Kong’s foreign affairs, but it has not included Hong Kong as a territory under some of its most important agreements (such as the China-ASEAN FTA).

Hong Kong does have a Closer Economic Partnership Agreement (CEPA) with China. However the qualifying period for businesses to access CEPA can be as long as seven years.

There is some confusion about treaty status concerning the territory. Hong Kong’s position appears somewhat confused, neither fully part of China’s own bilateral agreements yet unable to proceed unilaterally without Beijing’s approval.

Comparing the Cost of Business

The two cities remain competitive in terms of economic environment, such as tax rates. But operational costs, for example business rental in parts of Hong Kong, could be double those in similar areas in Singapore.

Property prices have rocketed, pushing the cost of office rentals extremely high. Costs are already forcing many back-office operations into nearby Guangdong cities such as Shenzhen, and it remains unclear what Hong Kong’s actual function is really intended to be.

Hong Kong remains a service center and gateway for China. However, in our view, there are serious questions to be asked concerning existing policies as concerns its positioning as a regional hub, and especially so when compared with Singapore.

Hong Kong appears not to have been provided with any visionary plan to take it forward as an Asian service center, other than loose plans to integrate it into the Pearl River Delta and use it as a hub for generating investment capital for Chinese companies listing on its bourse.

Meanwhile, Singapore has positioned itself as the gateway to Asia, and followed this through with very specific plans and a long-term strategy. Whereas Hong Kong has embraced China, Singapore has embraced a rather more diverse Asia, and in doing so has made itself a melting pot of pan-Asian languages and culture, especially so within ASEAN.

Singapore has also invested in a true added-value industry by importing crude and other petroleum and gas products from ASEAN neighbors, and Indonesia particularly, then processing these for export.

For now, Hong Kong remains a good location from which to base a trading company dealing with China, due to its wealth of talent and proximity to the mainland. The services sector in Hong Kong largely remains world-class in this regard.

Whether Hong Kong can maintain this advantage, with the rise of Shenzhen and Shanghai and their lower operational costs and existing compliance with mainland Chinese laws, will depend on future customs regulations.

Beijing’s intentions and the anticipated development of China itself make Hong Kong’s future role questionable. With no added-value industry like Singapore, Hong Kong is looking like a China-play only – with the potential for its services industry to migrate directly to China.

This process has already begun and will continue unless the Central Government can provide Hong Kong with a specific, defined, and planned role for the future.

This article is excerpted from “The Cost of Business in Singapore Compared With Hong Kong, China,” which was first published in ASEAN Briefing. It was re-edited for clarity and conciseness. For further details or to contact the firm, please visit www.dezshira.com.