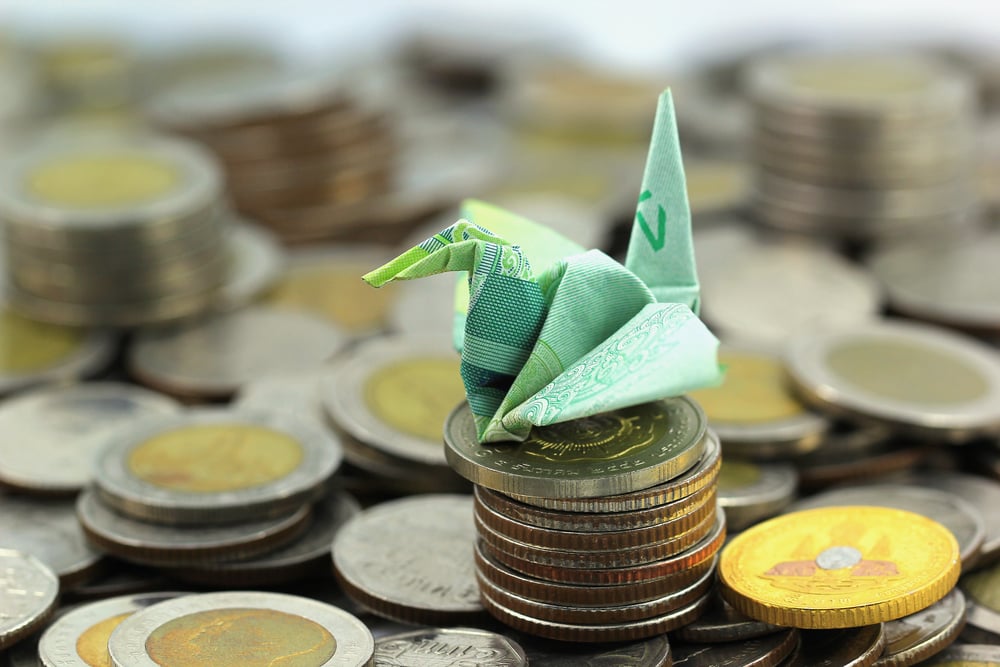 Exchange rate volatility has emerged as a pressing challenge for investors seeking to establish and scale regional production chains within ASEAN. 2015 survey data from the Economist indicates these fluctuations have overtaken regulatory compliance as the single greatest impediment to profit maximization in Southeast Asia – with nearly 50% of respondents voicing concern.

Understanding that this volatility is likely to be a long term risk associated with regional production, the following article gives an overview of the issues surrounding foreign exchange within ASEAN and highlights market-entry strategies that can be utilized to reduce operational exposure.

Sudden fluctuations in a given currency’s value can have significant cost implications for firms holding outstanding contracts or debt denominated in the ASEAN currency in question. The potential for volatility to negatively impact profitability should not be disregarded

Unlike the 17 members of the Eurozone, a bloc within the European Union that uses the euro (the UK and eight others continue to use their own national currency), the ASEAN Economic Community (AEC) has no common currency.

The risks of adopting such an arrangement have been borne out over the course of the European sovereign debt crisis. Still, for firms entering the AEC, utilization of regional supply chains without the assistance of a common form of exchange creates a unique subset of risks.

Under ASEAN’s common market, debt service, input pricing, and remittance of profits are all subject to the shifts in the value of the region’s ten currencies against each other, and against key trading  partners the US, EU and Japan.

Sudden fluctuations in a given currency’s value can have significant cost implications for firms holding outstanding contracts or debt denominated in the ASEAN currency in question. While changes to valuation may move in a company’s favor in the short term, the potential for volatility to negatively impact profitability or operations should not be disregarded.

As ASEAN continues to attract record levels of capital inflows, the volatility of regional exchange rates will likely continue into the near to medium term. This, in conjunction with a relative lack of risk-mitigation tools, has not gone unnoticed by investors.

Forwards contracts are a widely utilized and effective tool when managing foreign exchange risk in large markets with established and liquid currencies, such as the United States, EU and Japan. Forwards allow investors to lock in fixed exchange rates at relatively low cost, giving certainty to the currency conversion rate when settling contracts with suppliers, making payments on loans, and remitting profits.

In ASEAN, however, shallower liquidity, lagging availability of derivatives products, and heightened levels of government regulation make onshore forwards contracts a rare and ineffective tool for risk mitigation. Still, while these traditional methods fall short of their counterparts in developed economies, tools do exist to assist investors in their efforts to expand into the dynamic markets of Southeast Asia.

In response to the underdeveloped state of derivatives markets in many of ASEAN’s frontier economies, Non-Deliverable Forwards (NDF) have become the offshore alternative of choice for those seeking the coverage of traditional forwards contracts.

NDFs allow investors to sidestep the absence of onshore hedging tools and mitigate the risks posed by foreign exchange by entering into forwards contracts with financial institutions in third-party states. Within ASEAN, Singapore has emerged as a hub for this activity, allowing buyers and sellers to settle payments through financial intermediaries within its borders.

But while NDF brokers offer substantial liquidity under normal market conditions, the dominance of a few large financial institutions is likely to result in diminished capacity under adverse market conditions.

With this in mind, and in light of prevalent trends in China as well as the European Union, it is highly recommended that NDF mitigation be employed in conjunction with additional risk-mitigation tools.

Depending on the combination of production requirements, the adjustment of supply chain locations to mitigate exchange rate exposure may lead to substantial profit retention over the long term

Both as a means of mitigating exposure to foreign exchange risk as well as ascertaining areas warranting the introduction of NDF contracts, substantial market research should always be conducted on the front end of investment within ASEAN states.

The chart below provides a first step in this direction by outlining the average monthly exchange rate volatility among ASEAN states and with their key trading partners over the past four years. The currencies of Myanmar and Indonesia have been consistently more volatile against everyone else. The Malaysia ringgit has also been volatile against many currencies. 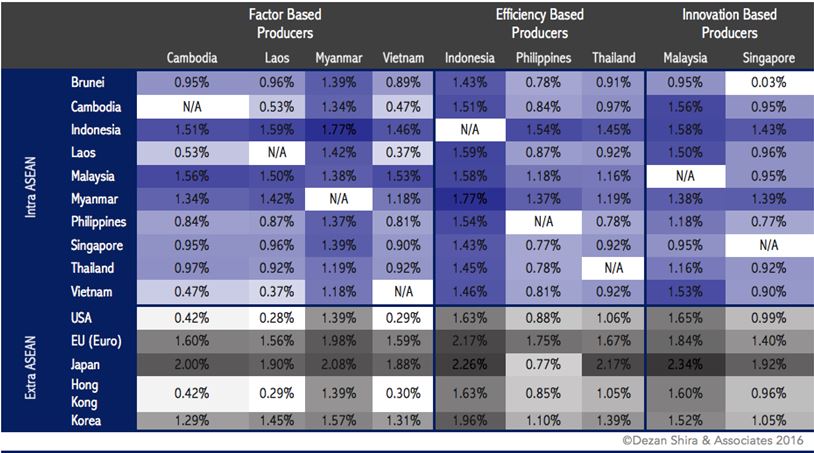 For investors, the optimal utilization of ASEAN’s tariff harmonization program is likely to require linkages of production in truly regional supply chains. The chart above thus categorizes ASEAN members into their respective production strengths – factor based (Cambodia, Laos, Myanmar and Vietnam), efficiency based (Indonesia, Philippines and Thailand), and innovation based production (Malaysia and Singapore).

Assessing alternative markets on foreign exchange should become an integral component of due diligence when examining where to locate each stage of the production process, in addition to traditional metrics such as labor and regulatory compliance costs.

In practice, this analysis can be applied by those considering expansion or establishment of a supply chain within the region. For example, prospective investors in the production of computing products can consider the volatility between their home markets’ – the US or EU – innovation-based economies with the capacity to build high tech components – in Singapore or Malaysia – and the markets within ASEAN where these products will be assembled – Vietnam or Cambodia.

Depending on the combination of production requirements, the adjustment of supply chain locations to mitigate exchange rate exposure may lead to substantial profit retention over the long term.

Dezan Shira & Associates, a specialist foreign direct investment practice that provides advisory services to multinationals investing in emerging Asia. This story is based on two articles first published in ASEAN Briefing, which were re-edited for clarity and conciseness. For further details or to contact the firm, please visit www.dezshira.com.