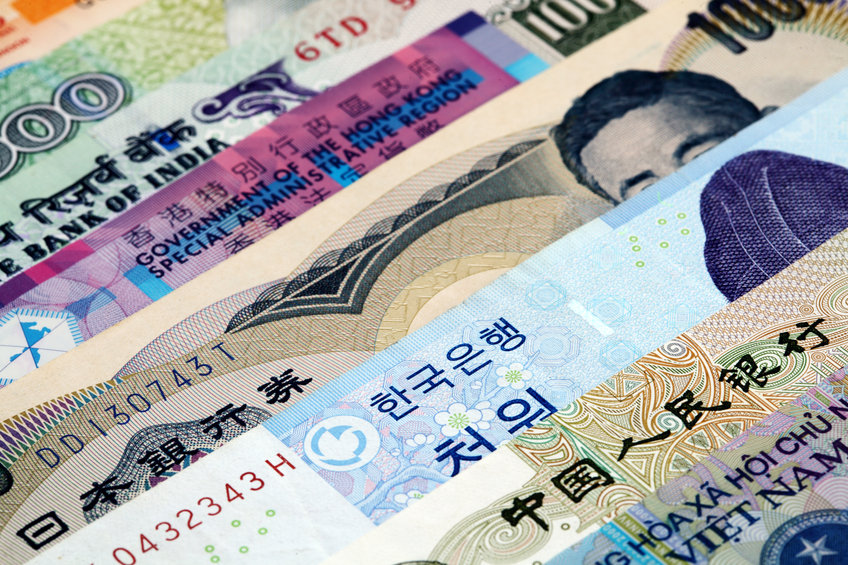 The Malaysian ringgit dropped by 3.7% through end-July amid further escalation of the 1MDB scandal. The yen rose by 4.6% due to its safe-haven status. Most other Asian currencies weakened slightly against the dollar

Asian exchange rates depreciated significantly versus the US dollar between end-July 2014 and end-January 2016. The weakening ranged from 2.9% in Vietnam and 6.1% in China to 23.9% in Australia, with most Asian currencies falling 10-15% versus the US$.

This was in a context of a globally strengthening US dollar and downward pressure on emerging markets asset prices. The US dollar’s nominal effective exchange rate (NEER) rose an impressive 22.5% in this period. On average, most Asian currencies actually depreciated less against the US dollar than did the currencies of US trading partners.

Between end-January and end-April of this year, Asian currencies generally recovered some ground as the US dollar softened globally amid another revision of the outlook for growth and monetary policy in the US, even as appetite for emerging markets assets recovered.

Since end-April, FX markets have had to absorb depreciation of the CNY, another strengthening of the US dollar globally, and Brexit. However, the response of Asian currencies varied.

The Malaysian ringgit dropped by 3.7% through end-July amid further escalation of the 1MDB scandal. The yen rose by 4.6% due to its safe-haven status. Most other Asian currencies weakened slightly against the dollar, although the Korean won, Taiwan dollar and Indian rupee picked up somewhat – possibly because of somewhat better Asian export trends, but also probably in response to the stronger yen.

Overall, the largest swings were experienced by the ‘commodity currencies’ such as the Malaysian ringgit, Australian dollar and Indonesia rupiah, as well as the yen – the last had already depreciated substantially since September 2012, when Abenomics was launched.

The short and medium-term outlook

But other major central banks, including the European Central Bank, will not be raising interest rates any time soon. This will lead to some more global US dollar appreciation, although it should be modest after the major swing that has already happened. We project the dollar to rise against the euro to 1.08 by end-2016 and to 1.05 by end-2017, compared to 1.11 today.

We expect the real exchange rate of most Asian emerging markets to appreciate trend-wise versus the US dollar, based on productivity trends. The only currencies that we project to continue to weaken against the US dollar through end-Q2 2019 are the yen, rupiah and, to a lesser extent, the rupee

In this setting, we expect Asian currencies to depreciate against the US dollar. The chart below shows the FX change we forecast between end-Q2 2016 and end-Q2 2017 (x-axis, left). Only the HKD remains broadly unchanged in this period, in our forecast.

Forex forecast against the US dollar 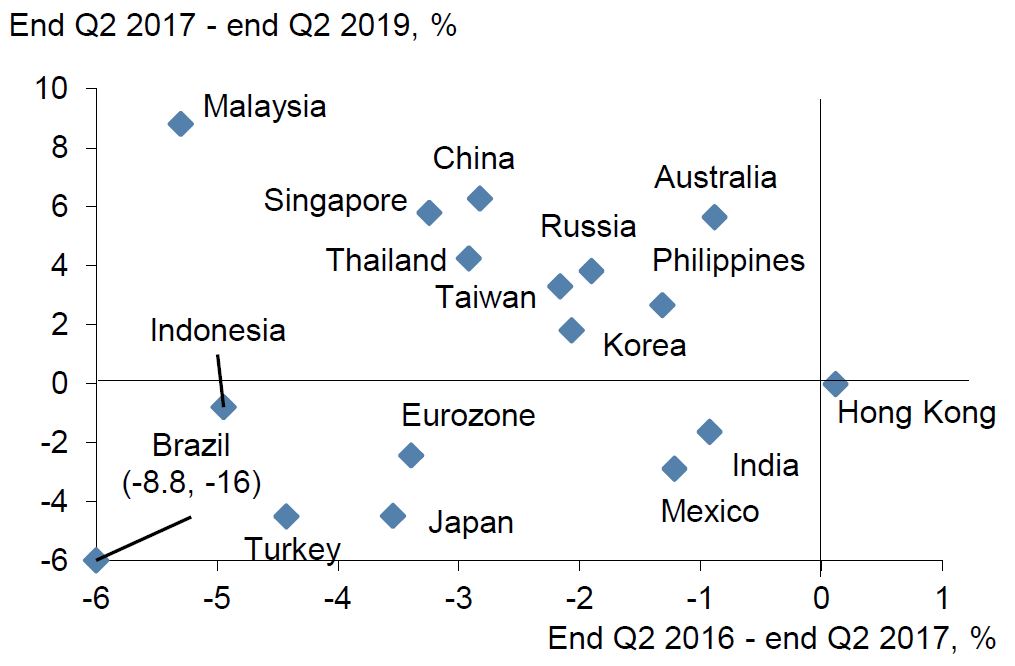 After that, between end-Q2 2017 and end Q2-2019, we expect most Asian currencies to strengthen against the US dollar (Y-axis, down). The immediate reason is gradually improving economic growth, which, among other things, attracts portfolio flows into equity markets.

We also expect interest rates to go up in Asia in the coming years. But since that is in conjunction with higher US interest rates, we do not expect yield spreads to widen significantly, except in Australia.

Meanwhile, in the background, we expect the real exchange rate (RER) of most Asian emerging markets to appreciate trend-wise versus the US dollar, based on productivity trends. The only currencies that we project to continue to weaken against the US dollar through end-Q2 2019 are the yen, rupiah and, to a lesser extent, the rupee.

In the case of the yen, this is based on our outlook for further monetary easing. In India and Indonesia, it is because we expect that inflation will remain substantially higher than in the US in the coming years.

As the table below shows, most Asian currencies seem to be broadly fairly valued on the Macro Balance gauge. 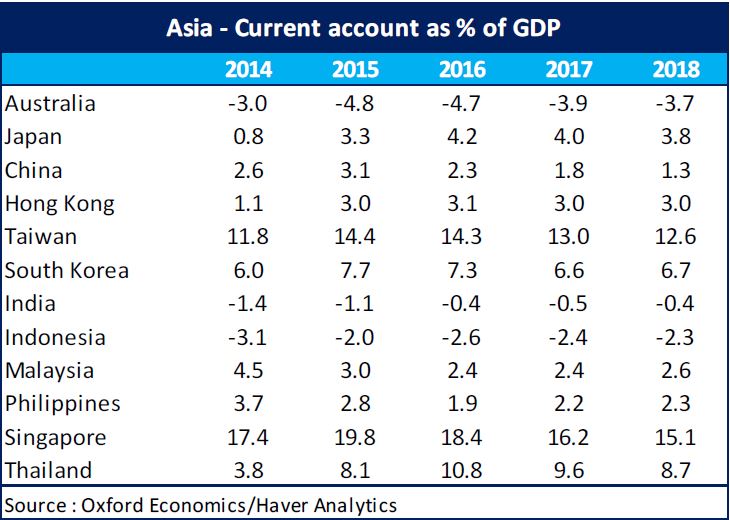 When poor economies grow relatively fast, we expect price levels to rise relative to those in high income countries . . . High price levels suggest the currency may be too expensive

In the case of China, an impressive rise in the current-account surplus during the 2000s was followed by a major appreciation later on. But this was in part because of international pressure. In the case of the smaller Asian economies, such political channels seem to operate less strongly.

Analysts sometimes look at changes in real effective exchange rates (REERs), although such changes do not necessarily say much in the absence of an anchor. To overcome this problem, we compare price levels using estimates of PPP exchange rates based on the International Comparison of Prices (ICP) project coordinated by the World Bank.

The idea is the same as that behind the Economist magazine’s Big Mac index, although the ICP project compares prices of hundreds of items.

When poor economies grow relatively fast, we expect price levels to rise relative to those in high income countries, most obviously via the Balassa Samuelson (BS) effect. (The BS effect occurs if prices of non-tradables rise because of rapid productivity growth in the tradable sector.)

This is illustrated in the chart below, which shows data for Asian countries for 1990-2016 (large red markers indicate observations for 1990; large black ones for July 2016), as well as the fitted line from a regression on global cross country data for 2014 (the observation for July 2016 uses the end July exchange rate and our forecast for GDP and its deflator). 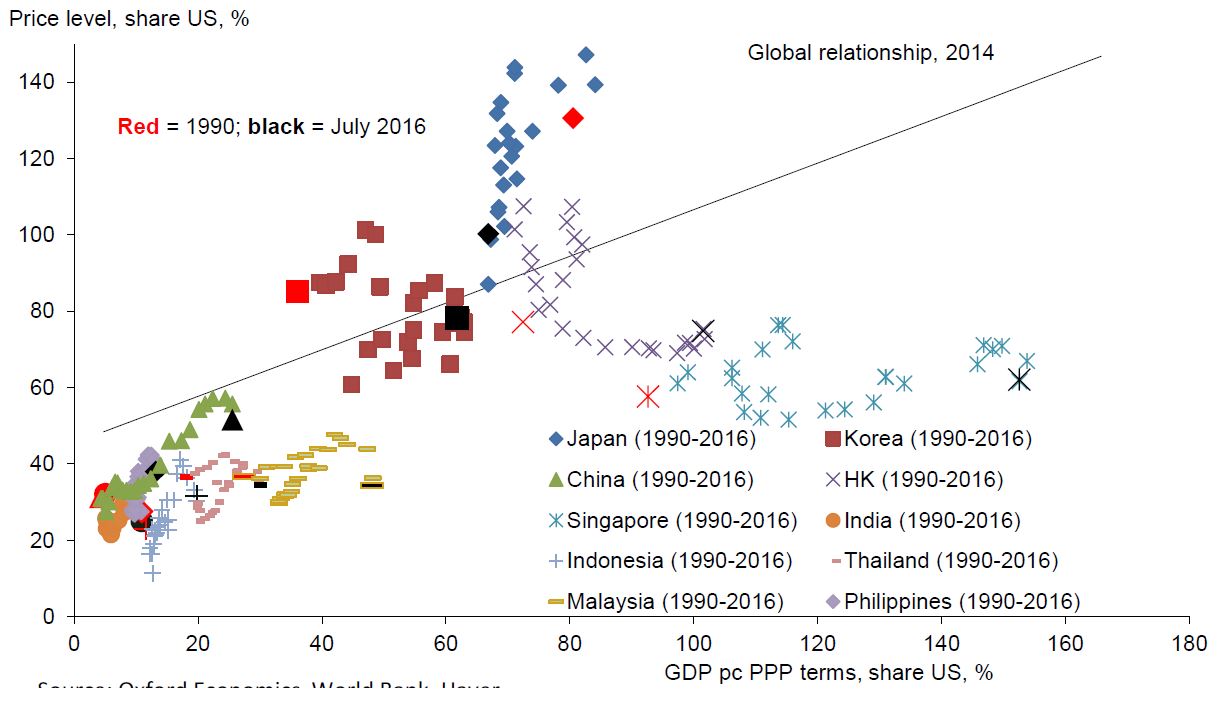 While we do not necessarily want to read too much into any specific relationship or line, the empirical evidence on the relationship between price levels and development is convincing.

What does the price levels and development chart say about the valuation of Asian currencies?

The yen was massively overvalued in the mid-1990s. Since then the real exchange rate has depreciated substantially, much of it via very low or negative inflation. Nowadays the yen is closer to its fair value, although Japan is still not cheap.

This case highlights the relevance of this framework as a long-term anchor. For a long time, yen diverged strongly from its equilibrium as suggested by the typical link between relative prices and development. But the overvaluation came at a large economic cost and was eventually reduced significantly.

India’s GDP per capita in PPP terms is the same now, compared to the US, as China’s was 15 years ago. The rupee now seems priced fairly attractively, compared to the valuation of the yuan in 2001

The Korean won has seen major swings in recent decades. But our framework suggests that the won is now priced reasonably attractively in general and not overpriced compared to the yen. As for the Taiwan dollar, we are not comfortable with the data. The PPP exchange rate for Taiwan suggests that, adjusted for prices, Taiwan’s GDP per capita exceeded that of Korea by 30% in 2015, and Japan’s by 20%. We think that cannot be right.

The Hong dollar and especially the Singapore dollar seem cheap now, given their stage of development. It is tempting to think that, especially in Hong Kong, the nominal exchange rate arrangement and the rule-based FX intervention that this implies has prevented the kind of real exchange rate appreciation that we would have otherwise expected.

However, Hong Kong witnessed strong real exchange rate appreciation under the peg in the late 1980s and early 1990s. Why have prices not risen faster in the last 10 years? Relatively low wage growth has played a role, in our view.

While the specifics differ, in both economies, real wages have grown little in the last 10 years, in part because of efforts to “maintain competitiveness,” but  also helped by the fact that these are small economies with significant infusion of relatively cheap labor from abroad.

The Chinese yuan appreciated strongly in real terms in the last 10 years. This is in large part justified by the rapid real catch-up that China has gone through. Compared to the global benchmark, the CNY seems to have edged down from fair value recently.

However, given its level of development, the CNY now seems relatively expensive, compared to the currencies of several other Asian middle-income countries. Prices are now on average higher in China than in Thailand and Malaysia, even though China’s GDP per capita is significantly lower than that of Malaysia.

India may be at the start of a catch-up trajectory like China’s. India’s GDP per capita in PPP terms is the same now, compared to the US, as China’s was 15 years ago. The rupee now seems priced fairly attractively, compared to the valuation of the yuan in 2001.

The Philippine peso seems somewhat on the expensive side, taking into account levels of development, compared with the rupiah and Thai baht. This is possibly because of the stream of migrant remittances. But the ringgit seems particularly cheap.

In broad terms, we expect Asian real exchange rates to continue to appreciate in the long term as long as catch-up trends persist, which we generally expect to be the case. The room for further increases in prices, relative to those in the US, is largest in India, but it is contingent on India continuing to outgrow the US by a significant margin.

In China, room also remains for trend real exchange rate appreciation against the US dollar – indeed that is the driver of our medium-term outlook for the CNY. But, as emphasized above, and in spite of the recent depreciation, it is not cheap in a regional context. To some extent the same is true for the Philippine peso. This may dampen the appreciation of the CNY and the PHP in the coming decade.

Even though the real exchange rates of Hong Kong and Singapore have in the last ten years seen remarkably modest appreciations, we expect them to rise in the longer term. The channels may play out in different ways, and politics will be as important as economics. But key is that, in both economies, we expect wage earners to benefit more from overall economic growth than they have done in recent decades.

Louis Kuijs is Head of Asia Economics at Oxford Economics. This article is excerpted from Asia: The Short, Medium and Long-Term Outlook for Asian FX, a research briefing report published on 8 August 2016. This article was re-edited for clarity and conciseness.