Euler Hermes Upgrades India's Risk Rating to B1 from B2

"Global GDP growth is expected to pick up slightly in 2014 (+2.8%), though the pace of the recovery should remain below 3% for the third year in a row," said Ludovic

Subran, Euler Hermes’ chief economist. “However, while global insolvencies are projected to decrease by -8% in 2014, they remain 13% above the pre-crisis level, meaning the 2009 crisis has not been absorbed yet."

Advanced economies are back in the game with an expected growth of almost +2% in 2014, the fastest since 2010.

Euler Hermes expects the eurozone to improve (+1.0%) after two years  of contraction, with all major countries registering positive growth. In the southern eurozone, exports should help countries exit recession. Most central European economies will benefit from the eurozone recovery.

India should be the exception, with growth forecast to accelerate to +5.6% in 2014.

India's risk rating was upgraded to B1 from B2 because of improved growth forecast, strong monetary policy response. The recent rebound in capital inflows should be maintained, sustaining the domestic investment recovery.

Italy was upgraded to A2 from A3 due to better economic prospects and insolvencies that are expected to decline from the second half of 2014 onward. Companies should benefit from a pick-up in credit and consumer spending in 2015. The country enters a period of political stability but medium term challenges remain. 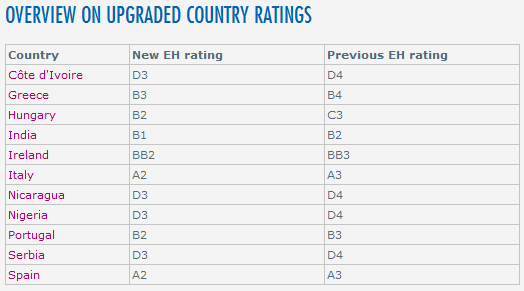