Economic Forecast: After a Stellar 2017, CFOs Face Great Expectations in 2018 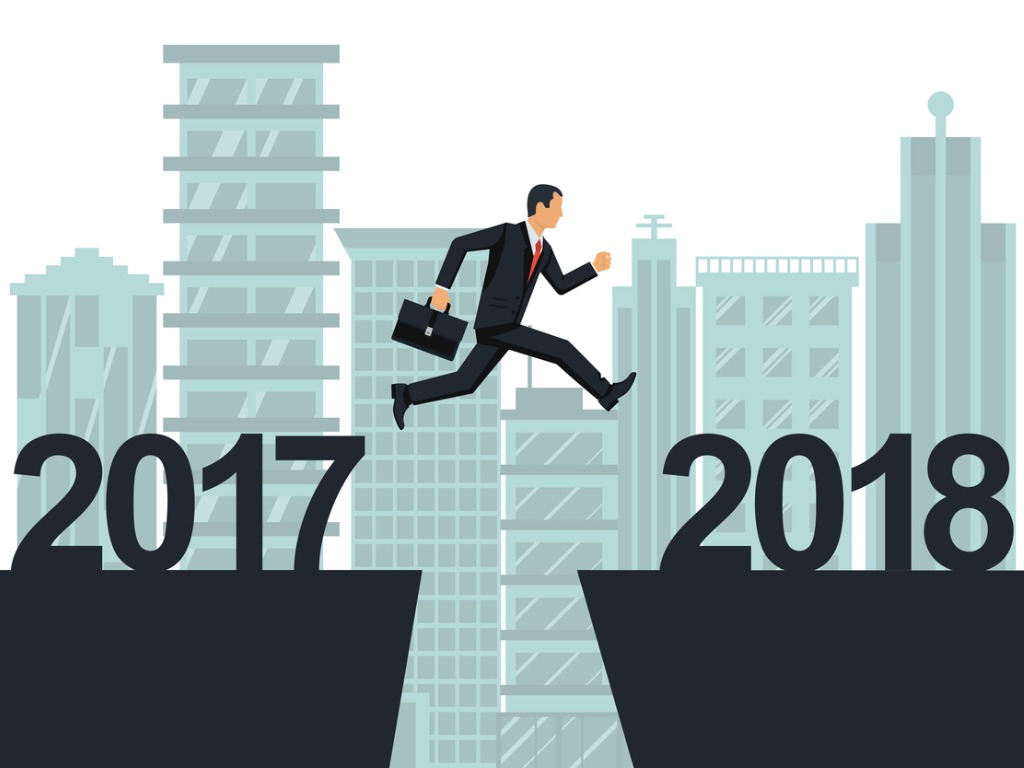 Unless your company is named HNA or Toshiba, you should have closed 2017 with a big bang in revenues and earnings. At least, that’s the expectation of your shareholders and the markets – and the equity analysts and business media that feed those hopes.

And why not? “We started 2017 with consensus expectations for circa 12% earnings per share growth,” wrote Toby Hudson in December. He is Head of Asian ex Japan Equity Investments at global investment manager Schroders. “As we write today, however, it looks like we will actually see 22%+ EPS growth, a far more dynamic outcome.”

Are the “Goldilocks” backdrop of moderate economic growth and low inflation, and the synchronized expansion of developed and emerging markets going to continue in 2018? The answer is yes, says Goldman Sachs

Asian equities have demonstrated very strong earnings delivery and consistent upgrades to expectations, he noted, boosting total returns for regional stock markets in 2017 to around 40% in US dollar terms, among the best five calendar-year returns in the last 30 years. The MSCI Asia Index, with 968 constituent stocks, ended 2017 up 33% – from just 4% in 2016.

In theory, all this should be good news for CFOs. Unless your company expanded too aggressively like China’s HNA and LeEco or got mired in accounting scandals like Japan’s Toshiba, you should be finalizing the annual report right about now and smiling at how happy stakeholders will be when you announce the financial results.

But the great results are also a burden going forward, even for finance leaders in privately held companies and state-owned enterprises. Everyone now assumes all the boats have been lifted in the rising tide of 2017 – and that the trend will continue into 2018.

Woe to the CFO who reports lackluster results for 2017 without a convincing explanation of what happened. The great expectations can prove to be a burden for CFOs in 2018 as well.

What to do? First, know what the macro-economic growth expectations are for the global economy and the markets where your company operates this year. Are the “Goldilocks” backdrop of moderate economic growth and low inflation, and the synchronized expansion of developed and emerging markets going to continue in 2018?

The answer is yes, says Goldman Sachs. “For the first time since 2010, the world economy is outperforming most predictions, and we expect this strength to continue,” says the US investment bank. “Our global GDP forecast for 2018 is 4%, up from 3.7% in 2017 and meaningfully above consensus. The strength in global growth is broad-based across most advanced and emerging economies.”

That’s broadly what the World Bank expects as well, though it is less exuberant than Goldman Sachs. In a report released this week, it predicts 3% global growth in 2017 and 3.1% in 2018 “as a continued recovery in emerging market and developing economies (EMDEs) more than offsets a slight moderation in advanced economies.” Like Goldman Sachs, the bank notes that the expansion is broad-based.

The economies of East Asia and Pacific, comprising China, Indonesia, Malaysia, Philippines and Thailand, among others (but not Japan, Hong Kong and Singapore, which are categorized as advanced economies), are forecast to expand by 6.2% in 2018, after an estimated 6.4% spurt in 2017. 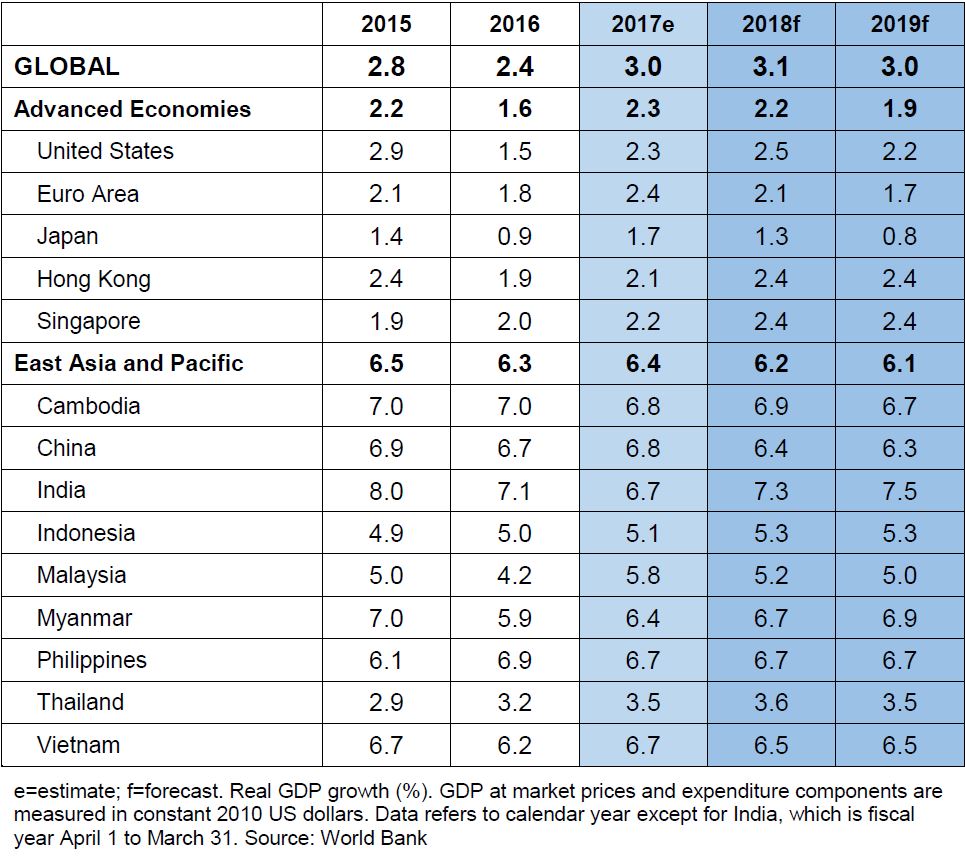 From Macro to Micro

Of course, economic growth does not automatically translate to positive financial performance at the corporate level. Much also depends on industry trends, technology disruption, corporate strategy and, yes, the CFO’s financial management.

Are you in the right sector? In October last year, Swiss investment bank UBS broke down the largest contributors to earnings growth expectations in Asia Pacific ex-Japan for 2017 (see chart below). 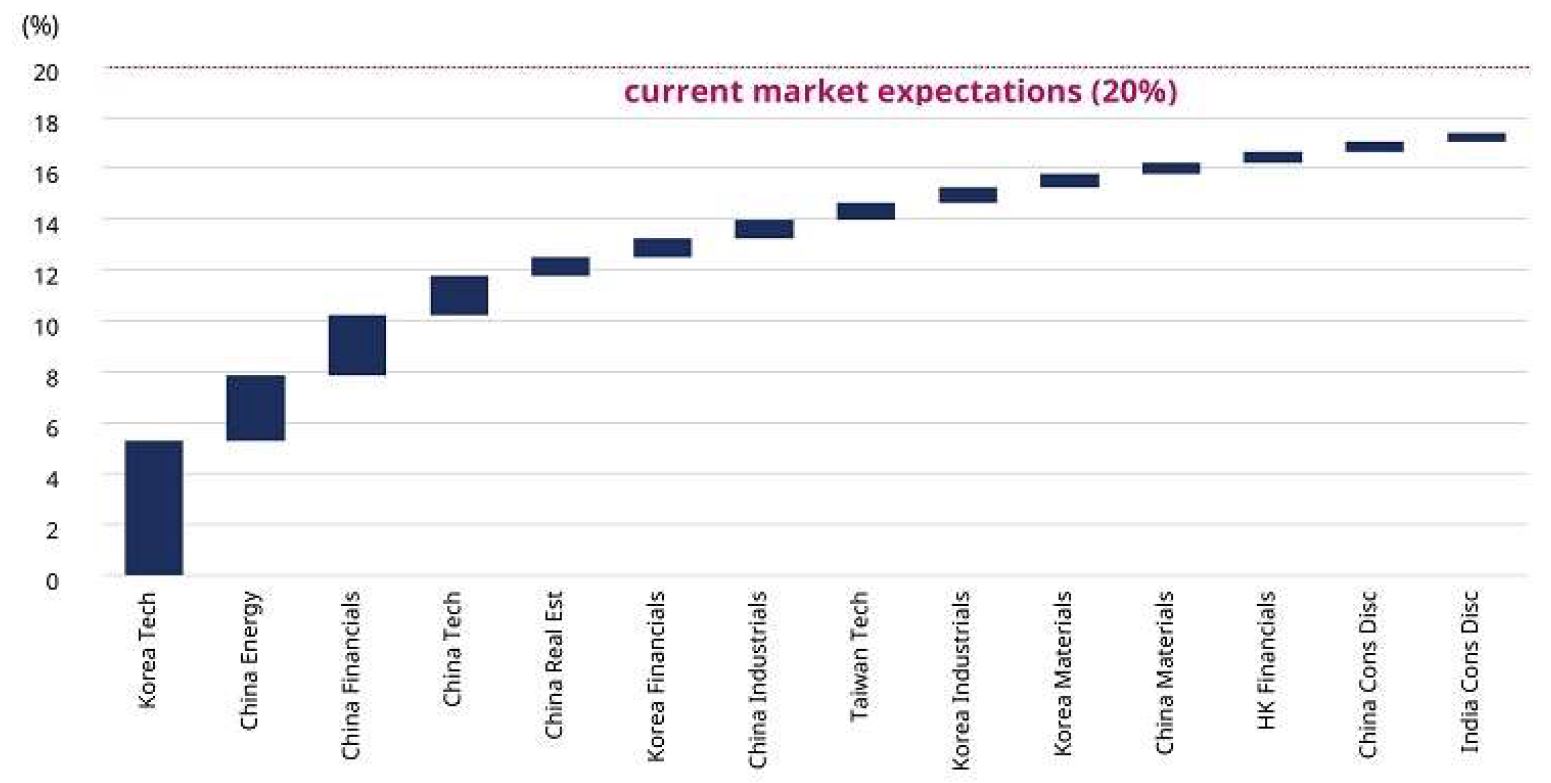 “A large portion of this 22% EPS growth is attributable to Korean technology companies, Samsung Electronics and SK Hynix,” says Schroders’ Hudson. “These two companies alone are likely to make c.US$52 billion earnings in 2017 versus only US$22 billion last year, of which c.70% is attributable to profits from their memory divisions.”

Chinese e-commerce players are also forecast to be notable contributors, led by Baidu, Alibaba and Tencent. In both these sectors, says Hudson, earnings are being driven not so much by GDP growth but by industry-specific supply and demand trends. These include the consolidation of the memory-chip industry, build out of cloud computing data centers and rise of social media, gaming, e-commerce and online payments.

Is your sector being disrupted? “Consumer staples look vulnerable to disruption in 2018,” says Goldman Sachs. “Longer term, we see disruption coming to virtually every business sector we invest in, with autos a prime candidate to follow consumer staples.”

In Asia, online start-ups have tried to disrupt sectors such as transportation (Uber, Grab, Didi), travel and hospitality (Airbnb, Hotels.com), retail (Alibaba, Zalora, Lazada, JD.com) and financial services (Ant Financial, Lufax). The incumbents’ response range from denial to co-optation to a radical change in business model, such as global supply chain manager Li & Fung’s recent decision to sell its products business to focus on transforming itself into a digital business.

It’s still early days to gauge success, but the disruption process is taking a financial toll on disruptors and disrupted alike, and should factor into the CFO’s management of stakeholder expectations going forward.

Is your corporate strategy and financial management aligned with a dynamic economic environment? Chinese companies HNA and LeEco ended last year in financial trouble, having expanded aggressively in a misreading of the Chinese government’s tolerance for capital outflows and their own ability to add value to overseas assets acquired at inflated prices.

It’s a risk that companies may run in 2018, in an environment where economists predict continued good times for the global economy that may not come to pass.

The disasters that were anticipated in 2017 – disruptions and loss of confidence from Donald Trump’s surprise win and Brexit, populist electoral victories in France and Germany, hard landing in China, war in the Korean peninsula – did not happen. But these and other risks could still upend the currently rosy scenario.

Companies that may be in the right sector and coping well with disruption in a rising Asian economy may yet fail this year if their strategy is not flexible enough for a change of course if gray rhinos charge and black swans swim into view.

This is true particularly for the CFO’s financial management. Companies with leveraged balance sheets will find it more expensive to service their debt as the US and other economies raise interest rates. And liquidity may wane if the rosy economic projections do not pan out, leaving companies with weaker cash flow and facing a tougher borrowing environment.

Gregor Carle, Head of APAC Fixed Income Product Strategy at asset manager Black Rock, notes that there was a record supply of corporate debt in 2017 as companies took advantage of refinancing at relatively low rates. “Trying to manage your debt balance when rates are still relatively low is good practice,” he says, a reminder to Asia’s CFOs that liquidity may be less abundant and monetary policy not as accommodative in 2018 and beyond.

Steering the financial ship this year promises to be complicated by inflated stakeholder expectations. CFOs should temper those expectations by communicating the risks while pledging to leverage on the positive trends

But some analysts warn that 2018 may no longer be the sellers’ market for corporate debt that 2017 was. “As a rising tide lifts all boats, strong demand for corporate credit has led to the strong performance and tightening of spreads among both good and lower quality issuers,” says Tim Haywood, Investment Director for Absolute Return Fixed Income Strategies at GAM Investments. “We feel this will change going forward.”

He adds: “We believe investors are likely to be more cautious in the type of credit risks they take and will spend more time focusing on company-specific fundamentals than they have or have needed to since the era of ultra-low interest rates began.”

Chinese bank ICBC warns that 2018 could see “the meeting of the black swan with the gray rhino” – referring to unexpected (black swan) and highly probable but ignored (gray rhino) risk events. It sees three gray rhino events – a reversal in global risk appetite, debt crisis in oil-exporting countries, and capital flight from emerging markets as the US raises interest rates – combining with a black swan event to roil financial markets and possibly damage real economies.

Among the black swan events, in ICBC’s view, are a faster-than-signaled rate hikes in the US, a mid-term election sweep in favor of the Democrats, a rollback in European integration as populist parties take control in Italy and Hungary and Greece and Cyprus decide to do a Brexit, and war in the Korean peninsula and the Middle East.

The far more bullish Goldman Sachs acknowledges the potential negative impact of higher US rates, but is “cautiously optimistic” that emerging markets will be able to cope because recent structural adjustments have made their economies and financial positions more resilient. Growth in developed economies are unlikely to be affected because “because divergent monetary policies typically have limited net financial spillovers” on them.

“The bigger near-term risks to the outlook are likely political,” says Goldman Sachs. “NAFTA negotiations continue to struggle and we believe that the Trump Administration could announce its intent to withdraw if the talks do not result in a revised agreement by early 2018.” In Europe, it believes a populist win Italy could have a profound impact, but “our base case is that the election will deliver a broad coalition which will not bring Italian membership of the EU or participation in the Euro into question.”

And “escalating tensions around North Korea’s nuclear ambitions and ongoing instability in the Middle East pose geopolitical risks with highly uncertain but potentially important consequences for the global economy,” adds the investment bank.

What does all this mean for the Asia CFO?

Steering the financial ship this year promises to be complicated by inflated stakeholder expectations, as many companies report stellar 2017 financial results. CFOs should temper those expectations by communicating the risks to the generally optimistic prognostication, while pledging to leverage on the positive trends.

This cautious optimism should inform planning, budgeting and forecasting, and communicated to the board, the C-suite and everyone else in the organization. The CFO should also continue refinancing debt to lock in currently low rates and work to keep cash at healthy levels.

Cost management, capital and operating expenses, recruitment and promotions, and M&A activities tend to be less disciplined during good times or in anticipation of continued good times. The finance team should resist the temptation to loosen the reins – without holding back innovation and spending on productivity tools and talent retention and skills upgrades.

The warning this week from New York Federal Reserve President William Dudley about the US tax cuts law is a reminder of where the global economy could be headed. “There is no such thing as a free lunch,” he said in prepared remarks. "The legislation will increase the nation's longer-term fiscal burden, which is already facing other pressures, such as higher debt service costs and entitlement spending as the baby-boom generation retires."

In other words, today’s good times could prove to be running on empty and can reverse rather quickly the morning after.