Don’t Buy Into the Hype: No Global Financial Crisis From Deutsche Bank 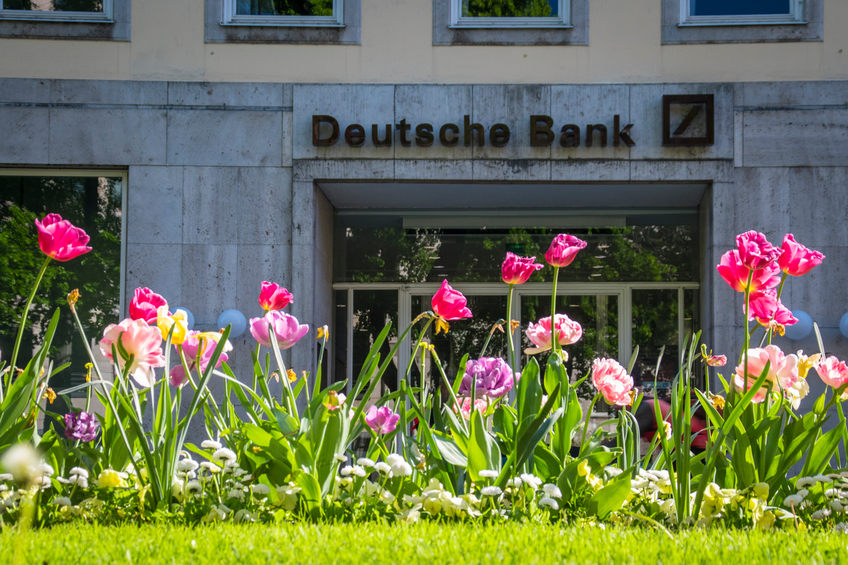 As CFOs work with risk management on what-if scenarios, the issue of the possible implosion of Deutsche Bank and the impact on the Eurozone and Asia, and thus on their company, must be weighing on their mind.

And it should be. Over the past weeks, Deutsche Bank has been in the headlines for all the wrong reasons. The crisis at Germany’s largest bank began in June when the International Monetary Fund reportedly labelled it the greatest systemic risk among banks to the financial system – though upon closer inspection the quote was a bit out of context.

But then came the news, a few weeks later, that one of Deutsche Bank’s subsidiaries in the US had failed a stress test. Worse, on September 16, the US Department of Justice announced it would fine the bank US$14 billion for its mortgage lending activities in the run-up to the 2008 Global Financial Crisis.

The crisis came to a head later that month, when German Chancellor Angela Merkel ruled out a bailout and said Germany will not interfere in the Department of Justice fine. Bad news continues to drip. On October 1, six current and former executives of Deutsche Bank were charged in Italy for allegedly colluding to falsify accounts of Italy’s third largest bank, Banca Monte dei Paschi di Siena.

“The Deutsche Bank situation may look bad, but it is no Lehman Brothers, with little systemic risk to the Asian financial system”

What’s next? Will Deutsche Bank precipitate another global financial crisis, as Lehman Brothers did in 2008? The probability of another GFC is something that CFOs in Asia and elsewhere have to factor into their forward planning, particularly those in banking and financial services, transportation and logistics, commodities, real estate and retailing.

CFO Innovation spoke to two academics and their take on Deutsche Bank should provide a bit of comfort.

“The Deutsche Bank situation may look bad, but it is no Lehman Brothers, with little systemic risk to the Asian financial system,” says Ranjan Chakravarty, a professor at India’s School of Business Management, NMIMS University, who was formerly with the National University of Singapore’s Centre for Asset Management Research and Investments.

While it is a large bank, Deutsche Bank is no longer Germany’s largest, he adds – there are many more systemically important German financial institutions. If anything, Prof. Chakravarty argues, it is the Deutsche Bourse’s planned US$29-billion merger with the London Stock Exchange that potentially poses a greater systemic risk to the financial system.

Craig Brown of the Department of Finance, National University of Singapore, agrees. Deutsche Bank has problems that are idiosyncratic to itself, he says. It has not been performing financially – the bank lost €6.8 billion (US$7.6 billion) in 2015 – and has been fined for a number of infractions. Prof. Brown is not surprised at Merkel’s pronouncement that Deutsche Bank should not expect to be rescued, since there is no reason for the government to defend a bad bank.

Even if Deutsche Bank implodes, argues Natixis Research, a unit of France’s second-largest banking group, any contagion effects would be limited. “While Asian banks are already under pressure from sluggish loan demand, asset quality deterioration, and lower net interest margins,” writes analyst Trinh Nguyen, “the financial system as a whole is more resilient to a shock coming from Europe as their exposure to European banks has been reduced.”

And even if Deutsche Bank precipitates a financial crisis, which is not Natixis’ base case at all, Asia “is likely one of the places to be, given its reduced exposure to European banks since 2009,” Nguyen concludes.

But why did the IMF ring the alarm bell, to begin with? It appears that it did not really do that. While it is true that the IMF report identified Deutsche Bank and Allianz SE as Germany two global systematically important financial institutions, it also noted “the resilience of the German financial sector,” which has been bolstered by “major financial sector reforms . . . now nearing completion.”

Much was made of the fact that the US$14 billion fine floated by the US is more than twice what Deutsche Bank has put aside. Last week, the media reported that the penalty might be lowered to US$5.4 billion

The particular reference to Deutsche Bank came on page 29 of the report: “Among the G-SIBs [global systematically important banks, as designated by the Financial Stability Board], Deutsche Bank appears to be the most important net contributor to systemic risks, followed by HSBC and Credit Suisse.”

Continued the report: “The relative importance of Deutsche Bank underscores the importance of risk management, intense supervision of G-SIBs and the close monitoring of their cross-border exposures, as well as rapidly completing capacity to implement the new resolution regime.”

Many in the media apparently had no problem making the massive leap from “relative importance” to “return of the global financial crisis.” The part about the “resilience of the German financial sector” was conveniently not highlighted.

Much was made of the fact that the US$14 billion fine floated by the US is more than twice what the bank has put aside. Last week, the media reported that the penalty might be lowered to US$5.4 billion. Deutsche Bank’s battered share price rose in response.

In Asia, past studies were dusted off that appeared to suggest that the region will be hurt by a banking crisis in the Eurozone. That’s because of the financial system’s exposure to Eurozone banks, the knock-on effect on trade with the Eurozone, and the significant proportion of intra-Asian trade with China that is actually a proxy for trade with the US and the EU, making Asian exposure to the Eurozone higher than what the headline numbers suggest.

A World Bank paper in 2013 analyzed the level of exposure of Asia to the Eurozone in response to a possible Eurozone failure emanating from the southern periphery, namely Greece and Cyprus. At first glance, direct exposure to Eurozone economies was not that high, ranging from just 6% of total exports in Thailand to 11% of total exports in Vietnam.

However, 14% of China’s exports were to the Eurozone. In absolute terms, this is 18 times that of Thailand’s Eurozone exports and 24 times that of Vietnam’s, to keep using those two examples. And much of China’s exports to the Eurozone depend on intermediate products from the rest of East and Southeast Asia. In other words, intra-Asian trade with China is actually a proxy for trade with the US and Eurozone.

The paper noted that Northeast Asia, in particular South Korea and Japan, have a higher level of indirect exposure to the Eurozone, thanks to their electronics industries that are based out of China.

A similar analysis of a Greek sovereign debt crisis was conducted by the Asian Development Bank in 2013. It predicted that Japan would bear the brunt of financial damage thanks to its banks investing directly in Eurozone countries. Echoing the World Bank analysis, the ADB warned that East Asia will be most affected by a Eurozone implosion through their exports to China, which are inputs to China’s exports to the Eurozone.

‘My short answer is no’

Chakravarty, who wrote a paper in 2011 that argued a US or European slowdown will have a limited and benign impact on Asia, dismisses fears about the return of the global financial crisis.

Is Deutsche Bank likely to be a tipping point for a new Eurozone crisis? “My short answer is no,” he says. “I do not think the impending blow-up of Deutsche Bank is going to have a significant impact on the Eurozone. It has already been priced in by the traders,” he adds. Deutsche Bank has gradually shed 90% of its share price since before the 2008 crisis, two-thirds of it from this summer.

CFOs should be examining their direct and indirect exposure to Deutsche Bank. Companies should look at whether they have bank accounts with the bank and bought any bonds, derivatives or derivatives funding related to it

Chakravarty contrasts the current financial environment from the run-up to 2008, when over-inflated assets were not backed by strong collateral and underlying loans were lent to individuals with poor credit ratings. No one had foreseen the crash of Lehman Brothers, whereas Deutsche Bank’s fall is pretty much telegraphed.

And intertwined collateralized debt obligations (CDOs) are no longer a feature in the financial landscape today. Intertwined CDOs had proliferated in 2008. Once one of them failed, many counterparties could not be paid, hence the systemic crisis. The rot was only stemmed by the US government bailing out too-big-to-fail banks.

This is not to say that a global financial crisis is no longer on the cards. What the relatively optimistic analysis means, though, is that CFOs and risk managers can assign a lower probability to Deutsche Bank precipitating a repeat in 2017 or the year after, as companies conduct what-if scenarios and draft planning and budgeting plans.

“I think we’re in for a relatively stable period,” says Chakravarty. Economic indicators in China appear to be stabilizing, suggesting that a hard landing has been averted. China’s economic slowdown is a key concern for Asia. The ADB estimated earlier this year that a deceleration of 1.6 percentage points in GDP growth China would trim 0.26 of a percentage point from GDP growth in the rest of developing Asia (excluding China).

Rapidly rising property prices in China have lately been raising red flags, but Chakravarty says the Chinese have shown “phenomenal policy management for the real estate sector.” At one point, he adds, “I thought the Indian bubble would be a threat, but now that has turned into growth. And the US elections and Janet Yellen’s [interest rate] hike going forward have all been priced in.”

As for Deutsche Bank, it is by no means out of the woods. What needs to happen, says Brown of National University of Singapore, is for banking regulators to ensure that any disruption caused by Deutsche Bank is limited. For one, its good assets should be transferred to another organization to avoid a fire sale of assets and avert a situation where bankers “gamble for resurrection” – do risky things in order to survive.

Meanwhile, CFOs should be examining their direct and indirect exposure to Deutsche Bank. According to the IMF, the bank’s biggest counterparties are in China and Japan.

And they should continue monitoring the economic and business environment for signs of a return of a global financial crisis or a recession in their own country and major economies like the US and China. Deutsche Bank may not be it, but there’s a host of other factors, including geopolitical flare-ups, that can push us back to the edge.

We still live in volatile times. The challenge for CFOs is to help forecast the future and prepare and implement the proper response to the uncertainties.

May May Ho is a Contributing Reporter at CFO Innovation based in Singapore.