China’s Economy Expands 7.5% in the Second Quarter. Now What?

In line with our forecast, China’s GDP growth edged up to 7.5% year-on-year in Q2 2014, supported by strengthening export growth and relatively firm consumption – and even as investment remained subdued, especially in real estate.

Looking ahead, in our view, most domestic organic growth drivers remain intact despite the weakness in real estate, while the outlook for export growth is reasonable.

As confirmed by the monetary data for June, the government is erring on the side of growth. While it will take some comfort from the Q2 data, we expect the government to continue taking measures to support growth and end up slightly overshooting its growth target.

Our base scenario sees economic growth slightly exceeding the government's target of 7.5% in 2014

The mild recovery was supported by strengthening export growth, as well as relatively firm consumption. 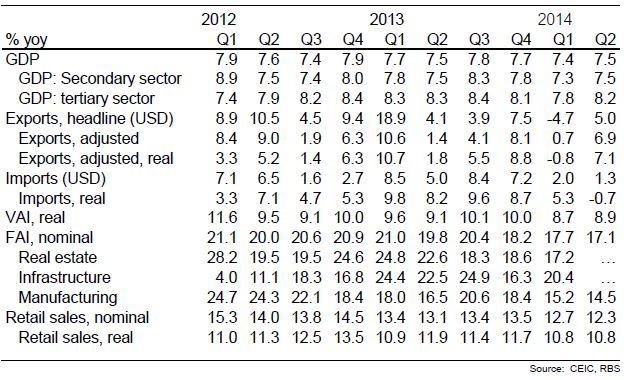 Foreign trade data released earlier showed that exports recovered somewhat in the second quarter. After adjusting for over-invoicing, we estimate that real exports expanded 7.1% year-on-year in Q2, up from a decline of 0.8% year-on-year in Q1.

Consumption growth held up reasonably well. Real retail sales growth registered 10.8% in Q2, unchanged from Q1. This was in part due to a still solid income growth.

But investment remained subdued. Fixed asset investment increased 17.1% year-on-year in Q2, a record low. Reluctance among corporates to expand capacity was one of the major drags.

Manufacturing fixed asset investment increased only 14.5% from a year ago in Q2.

We think the deceleration in real estate investment was also significant. Although June data is not yet released, we expect it to have remained weak amidst the gloomy environment on the housing market.

Industrial production was particularly solid in June, expanding 9.2% year-on-year, the highest growth in 2014.

The solid monetary data for June showed the impact of the People Bank of China’s efforts to support growth. New bank lending in renminbi was RMB1,080 billion in June, higher than expected by the market and up 26% from a year ago.

Non-bank lending excluding equity and "others" – our proxy for shadow banking financing – was RMB853 billion in June, due to relatively large volumes of entrusted loans, trust loans and banker's acceptance bills.

We do not think the Q2 data will change the overall policy stance significantly.

Overall economic growth has edged up, but downward pressures on growth persist – notably in real estate – and are emphasized by senior policymakers.

As a result, we expect the government to continue with the approach it has followed recently. It will continue taking and encouraging measures to support growth, such as expanding fiscal policy and ensuring financing, and containing borrowing costs in the real economy – but without resorting to major general stimulus.

Despite the weakness in the real estate sector, we think most of China's organic domestic growth drivers remain intact, notably consumption, urbanization and services, while exports should be supported by reasonable global demand growth in H2.

Meanwhile, as confirmed by the June monetary data, the government is erring on the side of growth. In all, despite the comments from some senior policymakers that the 7.5% GDP growth target is not a floor, we expect the government to end up slightly overshooting its target.

Our base scenario sees economic growth slightly exceeding the government's target of 7.5% in 2014.