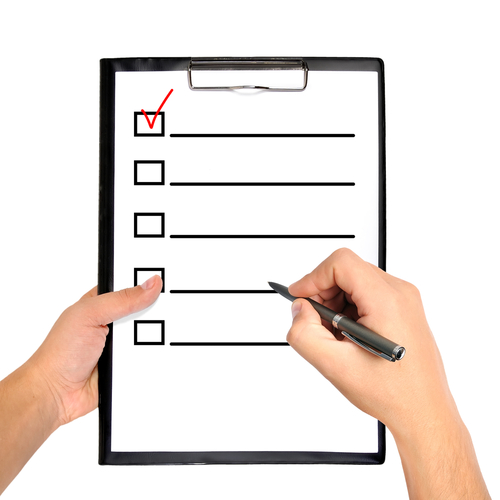 First quarter growth: 7.4%
The economic slowdown that started at the end of 2013 continued in the first quarter of 2014, with a slight improvement in March. GDP growth slowed further from 7.7% year-on-year in fourth quarter 2013 to 7.4% year-on-year in first quarter 2014. This falls between our forecast of 7.5% year-on-year and the Bloomberg consensus of 7.3% year-on-year.
Using a sequential perspective, we estimate that quarter-on-quarter GDP growth decelerated from 8.2% in Q4 2013 to 5.2% in Q1 2014 (both seasonally adjusted annual rates). This is the weakest pace since 2009.
While the slowdown in Q1 was broad-based, subdued exports and real estate activity were key:
Investment growth slowed on the back of a tentatively firmer monetary stance, reluctance among corporates to expand capacity and, importantly, a slowdown in real estate. Housing sales declined 5.7% year-on-year in Q1, while housing starts fell 27.2% from a year ago.
While this fall is from a high base early last year, it also reflects a cooling of the real estate market, especially in smaller inland cities.
In all, nominal growth of overall fixed asset investment (FAI) slowed from 18.2% year-on-year in Q4 2013 to 17.6% in Q1 2014, with year-on-year growth lower in March than in the first two months.
Consumption growth held up reasonably well, reflecting in part resilience in the labor market. Real retail sales growth slowed from 11.7% in Q4 2013 to 10.9% in Q1. But there was a pick-up in March as the impact of the austerity campaign started early last year began to fade.
Using the household survey data, we estimate that real consumption growth rose from 8.9% year-on-year in Q4 to 9.9% in Q1.
Foreign trade data released earlier showed that export growth was bumpy in Q1 and, overall, was lower than in Q4. After the bumpy data of the first two months, real export growth was 3.7% year-on-year in March, once we adjust for over-invoicing issues. The monthly activity data suggests a slight improvement at the end of Q1 2014.
Industrial production growth edged up from 8.6% year-on-year in the first two months to 8.8% year-on-year in March. Growth of retail sales also improved in March, on a year-on-year basis, although fixed asset investment growth did not.
Why 7.4% is not so bad
All in all, the economy slowed in Q1, but things look less bad outside the closely watched physical sphere.
As happened a year ago, the recent slowdown was most pronounced in the physical part of the economy – in industry, especially heavy industry. In this sphere of the economy, the impact of slower real growth is also amplified by falling factory gate prices, thus adding to pressure on firms’ bottom line.
GDP growth of the secondary sector (industry and construction) fell further from 7.8% year-on-year in Q4 to 7.3% year-on-year in Q1 in real terms; in nominal terms, it fell even faster, from 6.8% year-on-year in Q4 to 5.6% in Q1 (see charts below).
Real GDP by sector 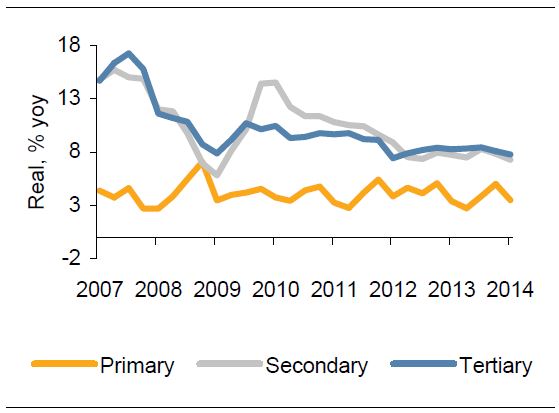 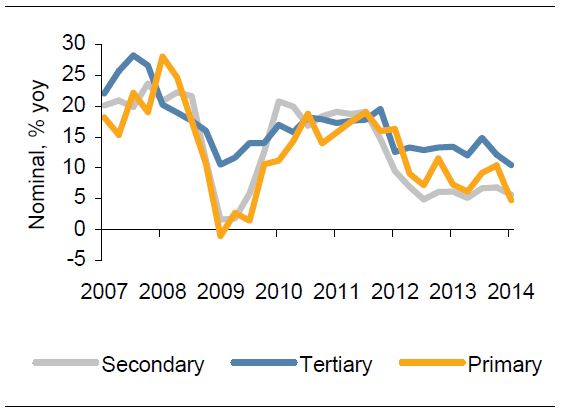 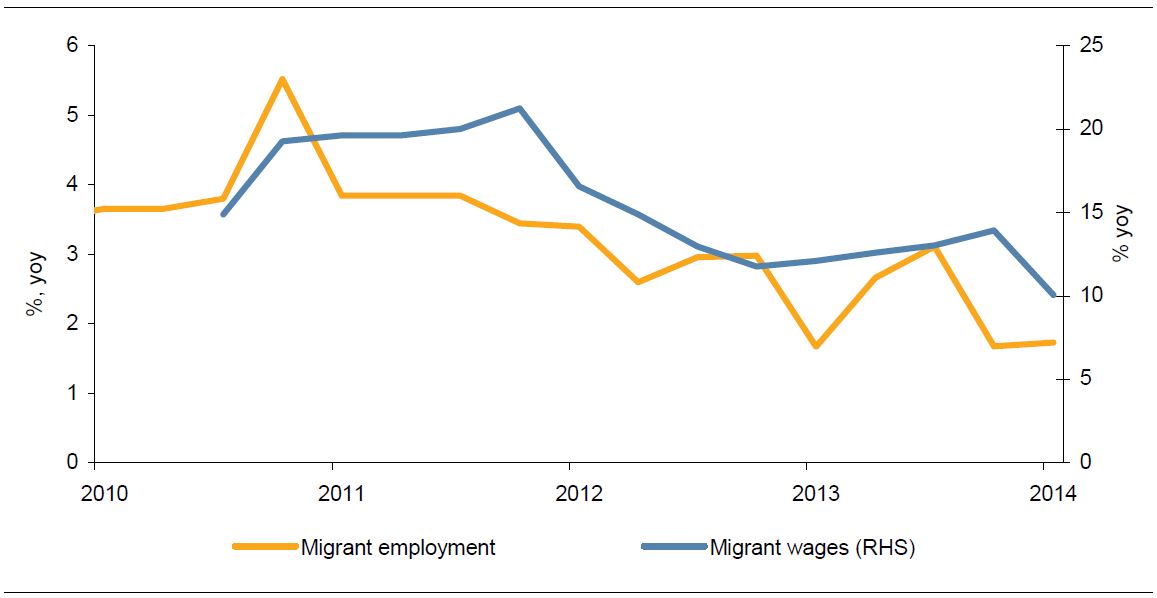 Sources: CEIC, RBS
Implications for macroeconomic policy
The fact that the labor market data still looks manageable should moderate the concerns policymakers have about the impact of the economic slowdown.
Senior leaders and policymakers are balancing considerations. The government work report of March, comments by Prime Minister Li Keqiang and a statement of the State Council two weeks ago underscore that China’s leadership still attaches much importance to economic growth.
But senior leaders do not want to pursue substantial stimulus, given the need to moderate credit growth and rein in financial risks and excesses in the shadow banking system, as well as the more negative connotation that stimulus has nowadays.
In this setting, the government recently started to take some mild growth-supporting measures, and we expect this approach to continue in the coming months, with the exact policy stance and measures heavily dependent on the data.
In our base-case scenario, with many domestic growth drivers still intact and amid a gradual improving global outlook, policymakers can prevent growth from falling below their bottom line without implementing major stimulus, although growth risks remain.
In early April, the government announced some steps to support growth. These include a) accelerating the construction of key investment projects, in particular railway, highway and water work projects in the center and western parts of the country, and b) supporting the construction of affordable housing.
This does not mean there will be a major or high-profile stimulus plan, as these projects are already included in China’s medium-term plans. Nonetheless, accelerating projects and ensuring financing imply some easing of the macro policy stance.
Other measures include tax relief for SMEs. In addition, the monetary stance appears to have been eased recently and we think this is in line with comments from senior policymakers, including Premier Li and People’s Bank of China Governor Zhou Xiaochuan.
Social financing
In March, total social financing (TSF) was RMB2,070 billion. While this was down substantially from a year ago, the base in March 2013 was very high. The March 2014 TSF number is actually quite strong – at 3.6% of annual GDP, it significantly exceeds the average of the preceding six months and well exceeds the Bloomberg expectation of RMB 1,850 billion.
Within total social financing, core bank lending was RMB1,050 billion, slightly down on a year ago, but up from February. Non-bank lending excluding equity and “Others” – our proxy for the shadow banking financing – was RMB884 billon in March.
While also significantly lower than a year ago, non-bank lending also comfortably exceeded the average of the preceding 6 months of RMB579 billion, supported by relatively large volumes of entrusted loans, bankers’ acceptance bills and corporate bond financing.
The evolution of interbank interest rates is in line with an easing bias. Interbank interest rates have moved around in recent months, but the 10-day moving average of the 7-day repo rate eased to 3.8% by mid-April.
The 3-month interbank rate has been significantly higher than the 7-day repo rate recently. The 10-day moving average has also eased in the first 3½ months, from peaks reached at end-2013.
Growth outlook
Despite the weak start to the year but encouraged by the mild pick-up in March, we remain relatively constructive on China's economic growth outlook for this year. We continue to expect that:
Taking into account the mild easing of the policy stance, we maintain our GDP growth forecast of 7.7% for 2014.
Nonetheless, the growth-policy dynamics in the coming months may keep markets nervous. What we are seeing now is a mild version of the least attractive of the scenarios we sketched earlier on, with subdued ‘organic growth’ coupled with the government easing macro policy.
It is the least attractive scenario because, in the context of worries in financial markets about financial risks in China, little progress is likely to be made for now with reining in the pace at which the credit-to-GDP ratio is rising.
We do not expect to see systemic financial problems or instability any time soon. Nonetheless, until organic growth strengthens convincingly and the government becomes more forceful with firming up the monetary stance, financial markets may continue to remain anxious and nervous about financial risks in China, thus continuing to affect sentiment and asset prices.
About the Author
This article is excerpted from “Alert: China,” a report by Royal Bank of Scotland and affiliated companies that was published on 16 April 2014. It has been re-edited for conciseness and clarity. ©Copyright 2014 The Royal Bank of Scotland plc and affiliated companies (RBS). All rights reserved.