China and the US Move Closer to a Full-Blown Trade War. What CFOs Can Do 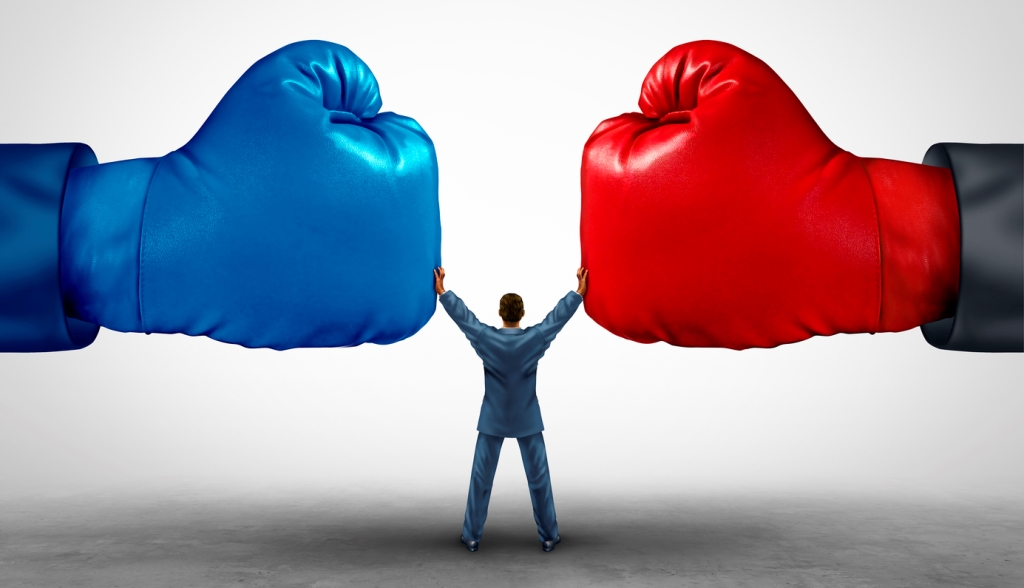 The US imposes a 25% tariff on imports of steel and 10% on aluminum from all countries, except for the European Union, Korea, Australia, Argentina, Brazil, Canada, and Mexico – but not (yet) Japan. China, which exported nearly US$1 billion of steel to the US in 2017, retaliates by raising import duties on US pork, fruit and other products valued at US$3 billion a year.

Donald Trump ups the ante by proposing up to 25% levies on about US$50 billion worth of 1,333 high value-added items from China such as medicines and medical equipment, machine tools and chemicals, and automobile parts. The stiff tariffs have yet to be imposed – US companies have until May 22 to raise objections – but Beijing has already drawn a line on the sand.

The next day, on April 4, China’s Ministry of Commerce announced 25% tariffs on 106 types of products from the US, also valued at US$50 billion a year, to be imposed if the US goes ahead with the second-round tariffs. They will affect important American exports such as soybeans, sorghum, chemicals, beef, airplanes and cars. “It is only polite to reciprocate,” the Chinese Embassy in Washington had said before the measures were announced.

On April 6, Trump directed US trade officials to consider imposing tariffs on another US$100 billion worth of Chinese imports, drawing fire from some in his own party. "Hopefully the President is just blowing off steam again but, if he's even half serious, this is nuts," said Republican Sen. Ben Sasse.

China can shut out US investment into China’s deregulating sectors, let the renminbi depreciate against the US dollar, and sell off China’s massive hoard of US Treasuries

So far, so transactional. Many observers are hopeful that a global trade war can be averted based on their reading of Trump as a self-described astute businessman who revels in his supposed prowess as a dealmaker. When the Americans have extracted most, if not all, of what they want, goes this view, they will step back from precipice – and Trump can strut, crow and tweet about his triumph to his heart’s content.

But what if it is more than that? Alicia Garcia Herrero, Chief Economist Asia Pacific at French banking group Natixis, notes that 800 of the 1,333 Chinese high-value goods Trump is targeting in the second-round tariffs are so-called “China Manufacturing 2025” products, such as airplanes and helicopters – high value aerospace items that the Chinese are not yet fully producing or exporting, but aims to do so by 2025, along with semiconductors, robotics, high tech ships, new energy vehicles and medical devices.

“The US is not targeting the lower value-added products that matter for cutting the [US$37-billion] trade deficit with China, but higher value products that are key to China’s moving up the ladder,” she says. Garcia Herrero points out that the US national strategy document released last year designated China as a “strategic competitor.” In the report, Trump accused Beijing of maintaining a “repressive vision” and of waging economic aggression to weaken America.

That may explain why China responded so swiftly with its 106-item list. Garcia Herrero had not expected the Chinese to target airplanes, for example, because they buy up to 60% of their turbo jets from the US. Or soybeans, which China mainly sources from American farmers. To the Natixis economist, Beijing’s aggressive countermove is a clear signal to the US that China will not let anyone stand in the way of its China Manufacturing 2025 goals, even if it also hurts them in the short term.

China has other means of leverage in addition to tariffs. For one, it can shut out US investment into China’s deregulating sectors such as financial services and new energy vehicles. It can also let the renminbi depreciate against the US dollar, and sell off China’s massive hoard of US Treasuries. The last two options could hurt China as much as the US, which is why Garcia Herrero thinks they are unlikely to happen.

For all the fire and fury, however, the Trump tariffs on the 1,333 items will not be imposed for at least 60 days, which should give both sides time to calm down and talk. (The tariffs on the additional US$100 billion more Chinese products are even farther off). “None of the tariffs have been put in place yet, these are all proposals,” new White House economic adviser Larry Kudlow told Bloomberg News. “We’re putting it out for comment. There’s at least two months before any actions are taken.”

US Commerce Secretary Wilbur Ross has said it would not be surprising if the tit-for-tat leads to negotiations, although he declined to speculate when this might happen. He stressed that the US is not embarking on “World War III.” And, he said on a CNBC TV program: “Even shooting wars end with negotiations.” China has been consistent about its openness to talking things over with the US, before and after the latest round in the looming trade war.

“What is worrisome is that with the departure of Cohn, the US administration seems to have rid itself of any restraint to future protectionist actions. That is why the Trump tariffs threaten trade”

“It’s more of a game of brinkmanship, making it clear what the cost would be, in the hopes that both sides can come to agreement and none of these tariffs will come into force,” Julian Evans-Pritchard, senior China economist at Capital Economics, told the Reuters news agency.

Those advancing this view say US politics can be one tempering factor, with mid-term elections just seven months away. Soybean growers are clustered in US states where Trump’s supporters live (Nebraska, Missouri, Arkansas, North and South Dakota). China is also targeting whiskey, beef, corn and wheat, which are exported from the Trump heartland – where an electoral swing could hand control of the US Congress to the Democrats.

Longer term, though, the departure of former Goldman Sachs president Gary Cohn, who resigned as chief economic advisor over the steel and aluminum tariffs, is seen as unfettering Trump and his protectionist rhetoric and instincts. “What is worrisome is that with the departure of Cohn, the US administration seems to have rid itself of any restraint to future protectionist actions,” wrote insurer Atradius in a report. “That is why the Trump tariffs threaten trade.”

Where does all this leave Asia’s corporate finance leaders? Where they always have been, in the driver’s seat of the financial bus as it navigates a slippery mountain road. This is not an unfamiliar situation for many CFOs and their finance team, having come through the global financial crisis, successfully, as recently as nine years ago and before that, the Asian financial crisis in 1997.

Here’s a roadmap for CFOs:

Don’t panic. For all the emotionalism and fear around a looming global trade war, the impact will work through company finances and the wider economy over time. There could even be a short-term bump as companies build up their stockpiles before the tariffs come into force.

So far, the steel and aluminum tariffs in the US and higher levies on imported pork, fruits and other goods in China are not expected to appreciably dent GDP growth in both countries (and the global economy as a whole). Even the proposed second-round tariffs, if imposed, are estimated to have only a mild impact on US GDP growth.

Swiss investment bank UBS estimates the impact on Chinese GDP growth at only 0.1%, even assuming full tariff pass-through to consumers. “This is due to the limited scope of the sanctions . . . compared to the overall size of China’s economy (US$12.8 trillion in 2017), as well as China’s structural economic transition away from exports towards domestic consumption,” writes Manulife Asset Management in a report.

But be alert to repercussions on targeted sectors. The impact will be far more serious on the steel and aluminum industries in China (and Japan, which has yet to win exemption from the US), and the China Manufacturing 2025 sectors, should the US follow through with the proposed second-round tariffs. Less agile companies in the affected sectors will face difficulties.

CFOs in these companies should have greater impetus to redouble efforts to optimize operations and financial processes through automation, among other initiatives. Other enterprises that have a business relationship with them will need to reassess the creditworthiness and prospects as a going concern of these firms as customers and suppliers.

Pay attention to second-order effects on the customers and suppliers of the affected companies, which might be your own customers or those of your customers and suppliers. Well-considered decisions about cutting credit lines, taking out trade credit insurance, doing business only on the basis of letters of credit and the like should follow the reassessment.

Non-US companies already in China or contemplating setting up a presence there will also have a clearer path to winning market share, in terms of the ability to sell at a slightly lower price than American imports and access to deregulating sectors

Be alert to the opportunities as well. The looming trade war can throw up what Garcia Herrero calls “collateral beneficiaries,” such as meat producers in Australia, which will be at a competitive advantage vis-à-vis US competitors in China. Their pricing power could also be strengthened as Chinese distributors, retailers, restaurant chains and so on compete for supplies from non-US sources.

American companies making products in China for export back home will also be looking for alternative production bases, so potential partners in Vietnam and other ASEAN countries may benefit. Non-US companies already in China or contemplating setting up a presence there will also have a clearer path to winning market share, in terms of the ability to sell at a slightly lower price than American imports and access to deregulating sectors.

CFOs may also see a bit of a respite from US interest rate rises as the Federal Reserve reassess its options in light of the turmoil in financial markets. The long-term trend will still be normalization from today’s very low rates, but companies may have more time to optimize capital structures and swap expensive debt with longer tenure instruments that lock in current low rates.

Still, no CFO should entertain the illusion that things will return to what they have been before Trump. “The US is still open for business, but it is going to be selective in the way it’s going to be open for business,” says Ludovic Subran, who is Global Head of Macroeconomic Research at German insurance giant Allianz, and Chief Economist of French credit insurer Euler Hermes.

“The fact that the one country that was preaching free trade and leveling the playing field for businesses across the world is now doing the opposite – that creates aftershocks in other countries,” he points out. “This is not the dogma of the past 30 years.” Economic and political policymakers, he predicts, will be acting to “regain military independence and monetary sovereignty” and to protect their own industries. “That completely changes the global game.”

Expect China to move faster on a bilateral free-trade agreement with Europe, which has been in the works for six years, says Garcia Herrero. Ratification of the recently signed Comprehensive and Progressive Agreement for Trans-Pacific Partnership, which will cut 98% of tariffs among 11 countries including Japan, Australia, Canada, Singapore and Vietnam, is also expected to be accelerated. Trump had withdrawn US membership in the original TPP.

For good or ill, international trade and commerce are being changed, on top of the technology disruption that is already going on. CFOs and their companies will have to change and adjust to intensified protectionism and volatility as well.