After the Army Coup: Finance Manages the Fallout 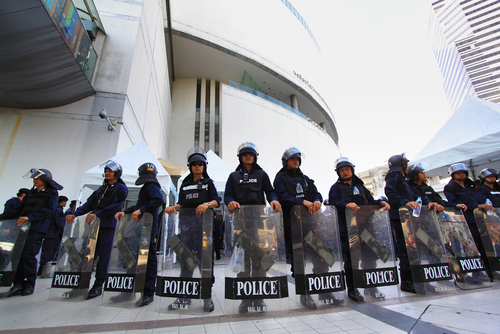 It was a happenstance. On 20 May, the day before three CFOs and a hotel entrepreneur were to engage in a panel discussion at the Hotel Management Thailand Summit in Bangkok, the Thai military imposed martial law in the early hours of the morning.

That panel, on “Managing Cyclical Businesses, Epidemics, Currency Wars and Other Risks,” suddenly took on a new dimension. As panelist Rony Fineman, founder of Thai hotel-and-property Nova Group observed during the discussion, it was one coup too many. On May 22, the army took full control of the government.

The baht fell against the US dollar as did the stock market. Economists issued dire warnings. “We expect the Thai economy to expand by 0.2% in 2014, but the latest political developments could cause the economy to contract,” says Fred Gibson, an economist with Moody’s Analytics.

"If you cut too much when things are down, you will not be able to take advantage when the recovery comes."

In this uncertain environment, the challenge for CFOs is keep finances ship-shape without, however, losing sight of the opportunities for growth. The steps the panelists at last week’s Bangkok conference said they would be taking can very well be adopted by their peers elsewhere in Asia:

This, too, shall pass

Don’t lose your nerve, says Sipim Srisuro, Group Financial Controller at Bandara Hospitality Group, which was established in 1983. “Downturns are part of the business cycle. If you cut too much when things are down, you will not be able to take advantage when the recovery comes. You will be left behind.”

Indeed, military governments and other disruptions are nothing new in Thailand. The latest coup is the 12th time since the 1930s that the army successfully intervened in politics (it failed seven other times). Last year massive floods in Bangkok and nearby provinces caused business losses and damaged global supply chains. In 1997, the implosion of the baht precipitated the Asian financial crisis.

In each of these instances, the economy and business initially suffered, then recovered and went from strength to strength. Today, despite disruption by rival protests between supporters and opponents of ousted prime ministers Yingluck Shinawatra and her brother Thaksin, Thailand remains Southeast Asia’s second-largest economy – and bigger than Australia.

Accor, a global hotel operator, is also keeping the faith. Thailand is a key market for international tourism in Asia, says Emmanuel Marion, Vice President Finance and Administration, Thailand, Vietnam, Cambodia, Laos, Myanmar and the Philippines. The infrastructure and soft skills built up over the decades will not go away just because the army had taken over (tourism now accounts for 10% of Thailand’s GDP).

That said, nothing is gained by throwing good money after bad. At the Nova Group, all major spending in Thailand has been put on hold while Fineman and other executives await clarity on the political and economic front.

At Bandara, some facilities at the three- and four-star properties have been closed temporarily, such as elevators and escalators. Room occupancy is currently at 56%, still at profitable levels, but all the lights do not need to be on. Care is taken to ensure the cutbacks do not inconvenience guests.

In any case, most hotels in Bangkok would already be lean today in response to various crises, including last year’s flooding and the recent political stand-off, says Wayne Williams, Vice President Finance at Minor Hotel Group, which owns Marriott, JW Marriott, Four Seasons and Anantara hotels in Thailand.

At the Minor Group (“minor” refers to the time US-born founder Bill Heinecke started in business in 1967, when he was 17), the focus is on optimizing revenues without new spending. Regular meetings are held with sales and other revenue groups to find new ways to leverage on existing assets.

One promising market is the international lesbian, gays, bisexual and transgender niche

That’s what Bandara is doing as well. For example, it happens to have a large laundry operation. As spare capacity increases because there are fewer guests, Bandara is offering laundry services to smaller hotels and other businesses.

“We are also looking to attract new guest segments,” says Sipim. One promising market is the international LGBT (lesbian, gays, bisexual and transgender) niche – the two Bangkok Bandara properties are in Silom, the city’s entertainment district.

“You don’t need to do anything special for them,” she says. “They just want to be treated like any other guests.” To make sure that happens, the hotel is conducting additional sensitivity training for staff. Bandara is not recruiting new people, although it’s not letting go of anyone either.

Another strategy is to focus more on the domestic market for food and beverage, hosting weddings and other life events, time at the hotel spa and so on. Discounts and special add-ons will be required, but the slimmer margins are better than none as many international tourists stay away in the short term.

Bandara’s focus on training echoes a potential strategy for other businesses during downtimes. They can use the breathing space to catch up on human capital development, particularly acquisition of soft skills such as communications and leadership. That’s difficult to do when occupancy rates are high.

In hotels, it is also challenging to undertake renovations when times are good. “Now is the ideal time for renovations,” says Williams. The owner of a Bangkok hotel that Minor is managing – the group both owns its own properties and manages others for independent owners – agreed to embark on a much needed facelift and updating before the military coup.

But renovations can be expensive, so the CFO has to make sure they are really needed and will deliver the expected benefits. Such a cost-benefit analysis is also useful to present to independent owners who may be understandably wary of digging deeper into their pockets at this time, when cash flows are deteriorating because of the external environment.

For its part, Bandara is not just renovating. It is also in the midst of constructing a brand new property in the southern resort island of Phuket, where international tourism, unlike in Bangkok, has been strong. Visitor numbers have been generally solid outside of the capital, where the political protests have been concentrated.

But this was before the military takeover. The Bangkok-based Pacific Asia Travel Association now forecasts a 5% decline in tourist arrivals, the biggest fall since 2009. In the wake of the coup, the US, Hong Kong and other governments have issued travel advisories on visits to Thailand.

The fall can be larger if violent protests against army rule erupt, which can conceivably lead to a siege of airports and train stations, for example. In 2008, Suvarnabhumi Airport shut down for a week as anti-government protesters stormed the facilities, stranding thousands of passengers.

The current situation justifies the decision of many hotel companies to diversify out of Bangkok and beyond, starting in 2006 with the military coup that ousted Thaksin. Democracy was restored in 2007, but Thaksin’s allies won the polls in 2008 and again in 2011, fuelling the street protests that continued until the military took over again last week.

Tourism in Thailand has an amazing ability to bounce back. After arrivals fell 3% to 14 million in 2009, they soared to 26.7 million last year

As a global company, Accor is, of course, already highly diversified. The current disruption in Thailand is not causing much of a dent in the context of the total enterprise – Asia accounts for only 11% of revenues, with Europe on 77%.

Bangkok-listed Minor Group has been stepping out too. It now owns or has stakes in hotels in Australia, Cambodia, China, Kenya, Maldives, Tanzania, UAE and six other countries. Thailand now accounts for 62% of revenues, a proportion forecast to fall to 55% by 2018 as Minor continues its outward push.

The same thing is true of the privately held Nova Group, which now has hotels in the US. Fineman started out in 1994 as a hotelier in Pattaya, southeast of Bangkok, before diversifying into construction and luxury condominiums, which are helping make up for the lackluster hotel division.

For its part, Bandara is looking at Myanmar, but the strategy is to expand to the provinces first. The group already has three properties in Samui on the Gulf of Thailand, a mountain resort up north in Chiang Rai, and spas in Phang Nga in the east and Rayong south of Bangkok.  Bandara Phuket is due to open in December.

Sipim is confident that this current turmoil, too, will pass. Not today, not tomorrow, but at some not-too-distant point. Tourism in Thailand has an amazing ability to bounce back. After arrivals fell 3% in 2009 to 14 million, they soared 13% to 16 million in 2010 and did not let up until last year, when arrivals reached a high of 26.7 million.

That’s why Bandara is continuing to take advantage of adequate liquidity and relatively low interest rates on loans – around 5.5%, the last time she looked. That’s miles away from the double-digit levels in 2008. The country’s tourism slogan is Amazing Thailand, and that’s what Sipim and her fellow panelists are counting on.

Cesar Bacani is Editor-in-Chief of CFO Innovation and happened to be in Bangkok to moderate a panel discussion when the Thai military took over the country.