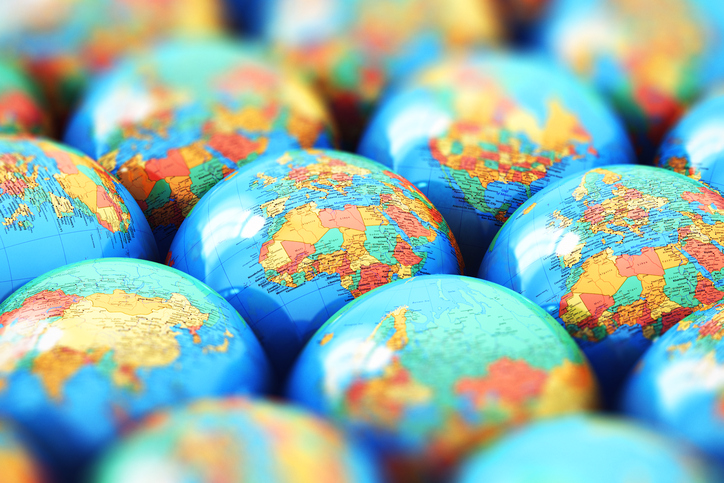 A bit more than a week into the New Year and some CFOs are already harboring doubts about the assumptions on interest rates, currency exchange rates, GDP growth and other forecasts their company used last year to craft the 2017 budget. And why not? The watchword for the year could very well be “uncertainty.”

Make that “considerable uncertainty,” as US Federal Reserve Chairwoman Janet Yellen put it at a press conference in December, in reference to the policy changes that new US President Donald Trump and the Republican-controlled Congress will implement, the impact of those initiatives, and the monetary policy the central bank will pursue in response.

The considerable uncertainty in the US is bound to bleed into other markets. And that means CFOs must constantly track currency rates, interest rates, inflation, policy changes and other factors that could affect the business

The phrase also surfaced in the newly released minutes of the Fed’s December meeting. According to the document, the members of the Board of Governors and the Federal Reserve Bank presidents “emphasized their considerable uncertainty about the timing, size, and composition of any future fiscal and other economic policy initiatives as well as about how those polices might affect aggregate demand and supply.”

“Several participants pointed out that, depending on the mix of tax, spending, regulatory, and other possible policy changes, economic growth might turn out to be faster or slower than they currently anticipated,” the minutes continued.

“Among the downside risks cited were the possibility of additional appreciation of the foreign exchange value of the dollar, financial vulnerabilities in some foreign economies, and the proximity of the federal funds rate to the effective lower bound.”

Are Your Currency Expectations Still Realistic?

Because it is the world’s largest economy, the considerable uncertainty in the US is bound to bleed into the planet’s other markets. And that means CFOs must constantly track movements in currency rates, interest rates, inflation, growth outlook, policy changes and other factors that could significantly affect the business.

Just about every forecaster, including the 18 US Fed governors and presidents, anticipate a strong US dollar. The US Dollar Index or DXY appreciated nearly 4% in 2016. (The DXY measures the greenback’s value against a weighted basket comprised of the euro, yen, sterling, Canadian dollar, Swedish krona and Swiss franc). In 2017, according to the French bank Natixis, the DXY can rise another 3.1% (see chart below). 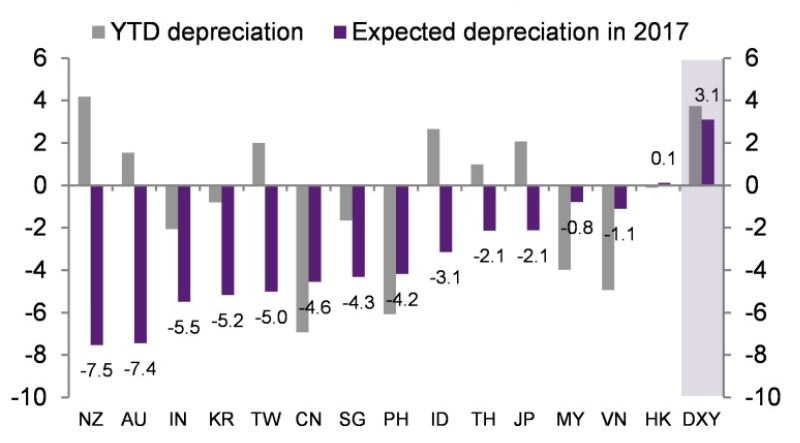 Natixis expects the renminbi to weaken nearly 5% against the US dollar by end-2017, touching 7.25, after depreciating by around 6% last year. That’s in the ballpark with Goldman Sachs’ forecast of 7.3 and Citi’s 7.15.

One outlier is Oxford Economics. “We expect the People’s Bank of China to continue to allow some depreciation, but resist significant CNY weakening,” Louis Kuijs, Head of Asia Economics, wrote last month. “We now forecast the CNY/USD to reach almost 7 by end-2016 and hover around that level throughout 2017.” The renminbi closed at 6.945 on December 30.

From Natixis’ perspective, the sliding yuan will bring down other Asian currencies, notably the Taiwan dollar (minus-5% against the USD) and Singapore dollar (minus-4.3%), because their “high exposure to China through trade and tourism” will force them to keep pace with the yuan to stay competitive.

It’s certain that interest rates will rise during the year, which means CFOs have to budget higher interest payments on company debt, including US dollar obligations 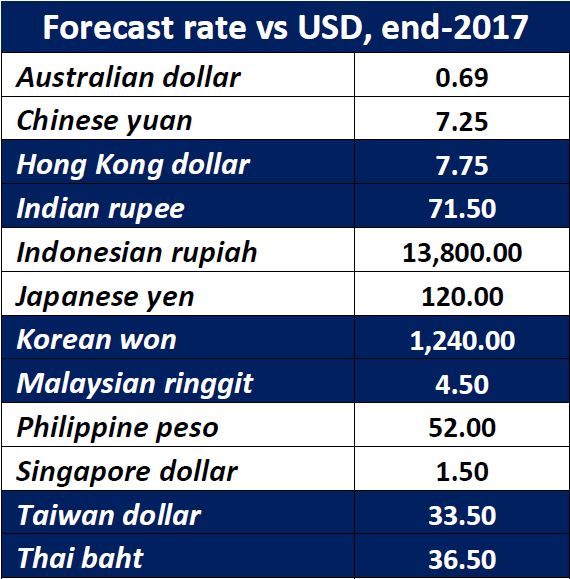 What About Interest Rates?

It’s certain that interest rates will rise during the year, which means CFOs have to budget higher interest payments on company debt, including US dollar obligations.

According to the minutes of the December Fed meeting, more participants now judge that the appropriate target level for the federal funds rate in 2017 is 1.38% to 1.87%. The broad consensus at the September meeting had been 1.13% to 1.37%.

Goldman Sachs and Natixis now project three interest-rate increases of a quarter of a point each in the US, bringing the US Fed rate to 1.5%. Citi forecasts 1.25%. This means higher interest rates in Hong Kong, since the currency peg leaves policy makers with no choice but to match US action. 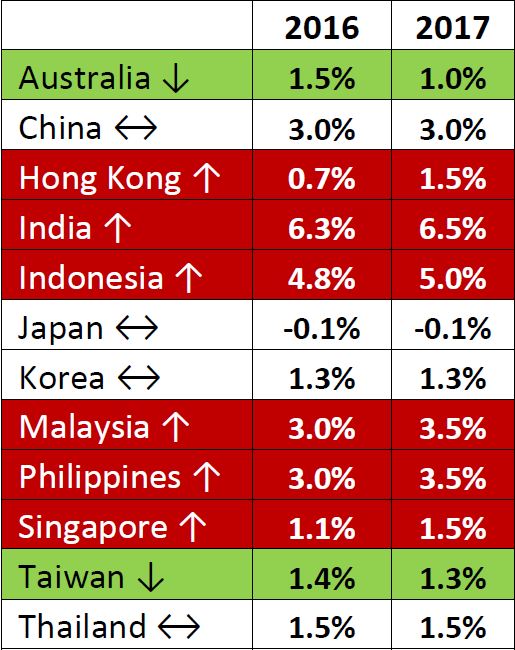 Economist Ruth Stroppiana of Moody’s Analytics, the macro-economic forecasting arm of the credit rating agency, acknowledges the uncertainty arising from 2016’s Black Swan events – Brexit and Trump’s election. But she believes “there is reason to be optimistic about the near-term outlook.”

Faster economic growth in the US will not provide a lift to Asian economies. Natixis anticipates modest acceleration in GDP growth for commodity exporters Indonesia and Malaysia, and stable growth or a slight deceleration for others in Asia

Moody’s Analytics forecasts global GDP growth of 2.7% in 2017 and 2.9% in 2018 “as business cycles synchronize in the major regions.” Stroppiana reports that “forward-looking indicators generally signal a stronger and more broad-based expansion” (see map below). 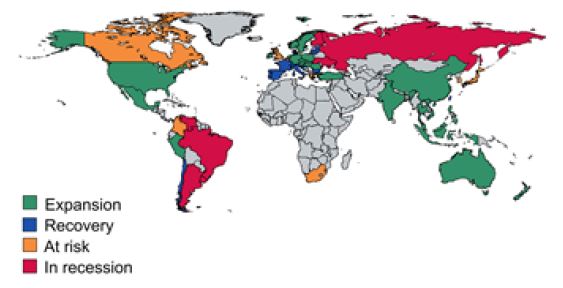 Goldman Sachs is even more bullish. “Expectations for global growth in 2017 is 3.5%,” says Chief Economist Jan Hatzius. “That would take us back to the top of the range that we’ve been seeing over the past five years or so.” The key driver is the US, where Goldman Sachs expects 2%-3% growth depending on financial conditions and fiscal easing under Trump and the Republican Congress.

Andrew Tilton, chief Asia Pacific economist at Goldman Sachs, expects China to continue its “bumpy deceleration,” but ultimately achieve the 6.5% official growth target. “We expect the government to continue to make a push for high levels of infrastructure spending growth,” he adds, “and then consumer spending we think will continue to grow at a pretty rapid clip.”

More than the US, both Goldman Sachs and Natixis regard China as essential to the fortunes of the rest of Asia. “The US is no longer the key determinant of growth in the Asia region,” says Natixis, noting that shipments to China now exceed exports to the US. This is true of services as well, including tourism.

In consequence, Natixis does not expect the projected faster economic growth in the US to provide a lift to Asian economies. The French bank anticipates modest acceleration in GDP growth for commodity exporters Indonesia and Malaysia, and stable growth or a slight deceleration for others in Asia (see table below).

No Tailwind From the US 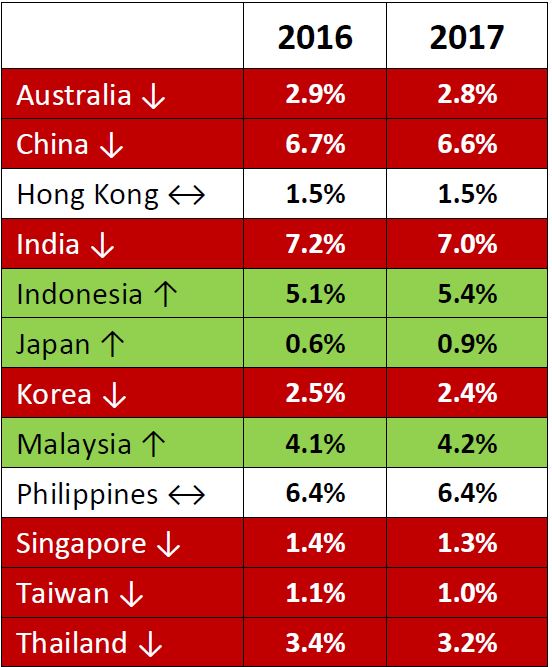 So where does all this leave Asia CFOs in 2017? Obviously, they must manage the risks from currency fluctuations and rising interest rates – and also leverage opportunities from economic growth.

Hedging strategies, including structured products and natural hedging, are called for, particularly in markets where the local currency is forecast to fall steeply (New Zealand, Australia, India, Korea, Taiwan, China, Singapore and the Philippines). Agility will be required of businesses with US dollar exposure (e.g., commodity importers and buyers of materials and machinery).

For better or worse, there is life for Asia’s businesses without Trump’s America

Managing higher interest rate expenses is another to-do item especially in Hong Kong, India, Indonesia, Malaysia, Philippines and Singapore. Those with US dollar denominated debt will not only have to deal with the unfavorable foreign exchange rate (if revenues are in non-dollar currencies) but also with higher interest payments.

Before Trump, companies and economies could have counted on exports to the US to a certain extent and on foreign direct investment from American corporations. That’s now in doubt, if the Republican government imposes an America-First policy and stokes a trade war with China and other countries.

Formal policy changes will take time to be implemented, but Trump has shown that badgering and bluster could have some results, as evidenced by Ford announcing a decision to stop building a factory in Mexico and instead expand facilities in the US.

The trends suggest that, in the short and medium term, the best bet for Asia’s CFOs and their companies is to focus on the domestic and regional markets. Expansion may be decelerating or holding steady in China, India, Indonesia and the Philippines, but at better than 5%, economic growth is proving resilient and dynamic.

And where America and parts of Europe are disengaging from global trade, China, India and ASEAN are not. With the death of the Trans Pacific Partnership, new life is being breathed into the Regional Comprehensive Economic Partnership (RCEP), a mega-regional economic agreement being negotiated between the ten-member ASEAN and six partners that it already has free trade agreements with: Australia, China, India, Japan, New Zealand and South Korea.

In other words, for better or worse, there is life for Asia’s businesses without Trump’s America. Even so, the region’s CFOs must still be vigilant about his impact on FX, interest rates and other business inputs, and the considerable uncertainty emanating from the world’s largest economy.