One Billion People and Still No One to Hire 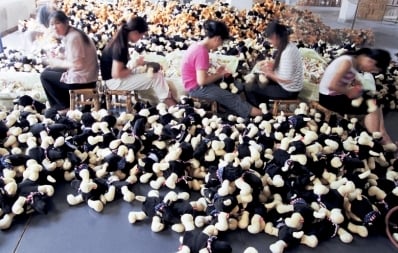 As early as 2002, China was already suffering from a shortage of factory workers. “Before, people talked about China’s unlimited labour supply,” Zhang Juwei, deputy director of the Institute of Population & Labour Economics at Beijing’s Chinese Academy of Social Sciences, observed four years later. “We should revise that: China is facing a limited supply of labour.”

But the shortage eased last year as orders for Chinese-made goods dried up because of the global economic crisis, putting an estimated 25 million workers out of work, according to Hong Kong’s South China Morning Post. Now that a moderate recovery has begun in the U.S. and growth is quickening in emerging markets, however, China’s factories are again feeling the pinch.
From textile and toy factories in the south to corporate headquarters and research labs in Shanghai and Beijing, businesses are finding that their number one challenge today is finding and keeping good workers. Hiring has become monumentally difficult, especially in the Pearl River Delta, and staff turnover rates have skyrocketed for several reasons.
It’s all a big headache for CFOs in China and those in Hong Kong, Taiwan, Korea, Singapore, Japan and other foreign companies that have manufacturing and other units in the mainland. They have already had to budget for higher wages after the 2008 Labour Contract Law came into force. It had caused a spike in labour costs by around 20% for many businesses, or at least those that fully adhere to the regulations.
With the latest shortage, finance managers are being forced to authorise even steeper raises. Some companies are claiming to have raised salaries by 30%, hoping to bring in more people. Is it working? A production executive at a printing business in Shenzhen, who has worked with staff development and production lines in China’s factories for a number of years, doesn’t think so.
“Those offers usually apply to seasonal jobs, not year-round ones,” he told CFO Innovation. “That’s why workers in the more remote provinces would rather stay in their home area, instead of coming out to Shenzhen or Dongguan.”
What Works
From his years managing factories in the mainland, this person has learned what works best in China when labour is short. The first recourse is to outsource part of production. “Even though all factories are short of staff now, there’s always a lull, when there are no orders of their own,” he points out. “If the manufacturing processes are the same, factories can offer to take some of the orders off other businesses’ hands.”
But there’s a strategy to choosing a partner factory, he warns. “We don’t work with anyone who can compete with us or steal our client.” That means either a smaller factory or one that doesn’t normally manufacture products in the same industry. Then there are factories that exist purely to piggyback on other manufacturers’ orders, usually sweatshop-style establishments. “Those are unlikely to become competitors because they don’t have R&D or customer service departments, just production lines.”
How is the profit margin affected if part of the order is farmed out? “Of course, we’d still want to earn our usual 10-20% profit, but it’s likely that the cost of outsourcing part of the order means we don’t earn anything at all for that entire bill,” he says. “But this is what we need to do or else we’ll lose the customer to a competitor.”

The second strategy is to nurture company loyalty, and not always with higher pay. “Five or six years ago, money was a big incentive to every worker,” says the former production executive. “But with the minimum wage [legislated] now, the pay is about equal at all the factories.” Higher overtime pay no longer cuts it either, since “many of the workers prefer to spend time with their family instead of earning extra money on their day off.”

The printing plant holds free team-building sessions for its production line workers and gives problem-solving and communication training for its office staff. There are also classes in English, Cantonese, computers, singing and “life lessons” – don’t spend your salary on cigarettes, how to save for the future, being careful about romantic entanglements.
Other programs to create goodwill include basketball competitions (the division champions get prizes of around RMB10,000 each) and staff talent shows. During special holidays, the company puts on live entertainment shows. “There’s special food at dinner, and everyone gets a roasted chicken leg while watching.”
Commitment
All these cost money, of course. “For one three-month session, we paid around RMB50,000 to train about 200-odd people,” says the executive. That outlay includes a stipend of RMB10 for each session that workers attend because it’s held on their day off — a total “bonus” of RMB80 a month if they attend every session. On average, the cost is RMB 200 to 250 per person per course.
There are members of staff who don’t see the point of training and would rather receive the RMB 200 in cash, he admits. But overall, about 20% to 30% grade the training as “good” while 60% to 70% think that “it’s okay.” Only 5% to 10% dislike it altogether.
The training programs require commitment as well. The factory workers’ culture and lack of education means that one session could take half a day of teaching before the lesson sinks in. “It takes a few months and constant training. We build on the lessons they learned from past sessions and persist with it. In fact, the professor we hired from Hong Kong recommended more sessions after he finished the first one.”
The production executive credits the activities for lowering attrition rates. “About 20% of our staff leave [after the Lunar New Year holiday],” he says, “compared with 30% to 40% who leave the other factory that I worked at, which didn’t have training or loyalty-building activities.”
Why is this? “They usually think twice about leaving the job if they feel they have built up a fairly good rapport and friendships with their co-workers,” explains the executive.
Pulling Up Stakes
If all else fails, the factory can consider following its workers inland. Major multinationals that have already opted to shift manufacturing or research into heartland areas include General Motors, Honda, Motorola, and Intel. They hope to both lower their costs and open up new markets. The cost of staff salaries in inland areas is about half of that in the coastal regions because of lower living standards. For example, the minimum wage in Shenzhen is RMB1,000 a month, but only RMB580 in Hubei.
Businesses that are considered as belonging to the high-tech sector have the advantage in relocation. The government is actively enticing them to move to middle and western China, where job opportunities and foreign and private investments are lagging. Incentives include acres of cheap land, beneficial investment policies, and “industrial transfer parks” in the undeveloped and mountainous areas of Guangdong.

But the disparity in salaries may already be disappearing. Professor Hu Ronghua of the Nanjing University of Finance and Economics in Jiangsu Province says that “the economic recovery and inflationary pressure are encouraging more local governments to raise their minimum wage levels.” Claims Li Jing, an expert with the Chinese Academy of Social Sciences: “Companies in the central and western regions are offering the same salaries as the Delta region.”

Also, human resources companies are reporting that hiring good managers in remote areas is tremendously difficult.
Goodbye, China
For some companies, particularly those that manufacture lower value items like shoes and garments, the final solution may be to leave China altogether or at least start manufacturing beachheads in lower cost countries like Vietnam, India, Indonesia and the Philippines as insurance against intensifying labour shortages and other problems in China. Even some high technology companies are going this route. Foxconn, the Taiwan electronics manufacturers that produces Mac computers and iPhones for Apple, is building a US$200-million factory in Vietnam.
There are, of course, problems in relocating to other countries, including in some cases inadequate network of suppliers and limited availability of materials, in addition to weak logistics support. China is still far superior than other countries in terms of infrastructure and supply chain. But the implementation of the Asean-China Free Trade Agreement this year at least opens the way for goods made in factories that have relocated to Asean countries to access China’s burgeoning consumer markets.
About the Author
Angie Mak is online editor at CFO Innovation.
Read more on
compensation and benefits