The Olympus Scandal: When a Foreign CEO Rebels 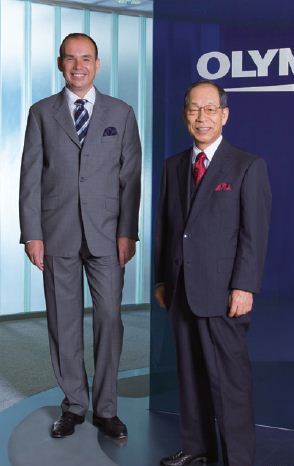 Speaking to CEOs, CFOs and other leaders of home-grown Asian corporate giants these days, one increasingly hears the same refrain. “We need to change to become globally competitive.” “We need to bring in new perspectives, new ways of doing things.” "We need a Westerner to conquer Western markets."

Japan’s Olympus, the US$11-billion-a-year maker of cameras and medical equipment, is no exception. Last October, when then-company president Tsuyoshi Kikukawa spoke to British-born Michael Woodford (both pictured, left), he made clear his belief that Olympus needed to change.
“I felt his strong determination for drastic change and for entrusting me with the task of realising the company’s vision in the new era,” Woodford was quoted in Olympus’s 2011 annual report.
On 1 April this year, Woodford, 51, became the company’s first ever foreign president and chief operating officer, replacing Kikukawa, who became chairman. An Olympus employee since 1981, Woodford was previously Executive Managing Director of Olympus Medical Systems Europa.
Six months later, Olympus, which was founded in 1919, also made him its CEO. But barely two weeks after that, on 14 October, the board suddenly ousted the newly minted chief executive.
The market was shocked because, in promoting Woodford to CEO, the same board said it was “extremely pleased with the progress made under Mr. Woodford’s leadership.” It added that his initiatives “not only already had a positive impact on the financial results, but also in creating an environment where change is not only accepted, but actively encouraged.”
You paid how much?
What happened? Is this another cautionary tale about the gap between East and West and how the brash management style of Western executives can damage Asian business cultures?
In fact it is turning out to be a saga of old-fashioned greed, fraud and possibly the Yakuza, Japan's feared criminal gangs. Woodford had spoken darkly about "forces behind" Olympus and has requested Scotland Yard in London for police protection.
Olympus, however, portrays the firing as a West vs. East clash of cultures. Woodford “was not able to understand that we needed to reflect the management style we have built up since the company was established 92 years ago, as well as Japanese culture,” said the 71-year-old Kikukawa, who  complained that the Englishman by-passed managers to issue direct orders to the rank and file.
But the market was not convinced. As of 21 October, Olympus’s stock price had shed 50% of its value, from 2,482 yen (US$32) before Woodford’s ouster to 1,231 yen (US$16). Investors have lost the equivalent of more than US$4 billion.
And Woodford, who remains a board director, is fighting back. The real reason for his sacking, he said, was that he questioned M&A deals that Olympus completed several years ago, particularly its 2008 acquisition of British medical equipment maker Gyrus.

Investors were aghast at Olympus's admission that it paid US$687 million to the financial advisor that worked on the Gyrus deal – that's equal to 31% of the US$2.2 billion purchase price. It is the largest M&A fee ever made, wire service Thomson Reuters estimates. The previous record was US$217 million in the far larger €70-billion takeover of Dutch bank ABN AMRO by RFS Holdings in 2007 – some 3% of the purchase price.

Olympus denies any wrongdoing. All M&A transactions had gone through the appropriate procedures, the company insists. In a 19 October statement, it pointed out that the board of corporate auditors had concluded that “no dishonesty or illegality is found in the transaction itself, nor any breach of obligation to good management or any systematic errors by the directors recognised.”
PwC report
As for Woodford, the company said it would “consider taking legal action against him if this is deemed to be necessary.” Olympus said Woodford was dismissed because “major differences had arisen between Mr. Woodford and other management regarding the direction and conduct of the company’s business and this had become an impediment to management decision making.”
Olympus said Woodford had commissioned a report from an “external agency” –  this was PricewaterhouseCoopers – on his own initiative. He submitted the report to the company’s senior management, auditing officer, auditing agency and legal office on 13 October and called for the resignation of “certain members of the management team.”
“While some media agencies have published suggestions that this request for resignations was the real reason for Mr. Woodford’s dismissal, in fact this request itself was not a direct reason for the decision,” said the statement. “Instead, [the report] represents no more than another example of the numerous arbitrary actions taken by Mr. Woodford.”
Olympus also criticised the PricewaterhouseCooper’s report as containing “a large amount of material that is based on supposition and speculation.” The company said it believes the report “is at variance with the facts and open to misrepresentation.” The report has "no bearing on the audit of Olympus Coporation or its group companies," it added -- the company's long-serving external auditor was KPMG until it was replaced by Ernst & Young in 2009, after the Gyrus deal was completed..
Warrants and options
It then went on to explain the Gyrus deal in some detail. Olympus and the financial advisor it hired, which the statement curiously did not identify, had agreed on US$5 million as basic remuneration. In addition, Olympus agreed to pay a success fee equal to 5% of the acquisition amount. With the purchase price at US$2.2 billion, the success fee should amount to US$110 million.
But the actual success fee ballooned because of the way it was structured. Olympus agreed to pay the unnamed financial advisor 15% in cash (up to an upper limit of US$12 million) and 85% in options and warrants. (KPMG, then the external auditor, reportedly urged Olympus to pay all-cash.)
Accordingly, on 30 September 2008, the financial advisor was issued warrants in Gyrus valued at US$50 million. In addition, the advisor was granted options in Gyrus valued at US$176.9 million.
On 31 March 2010, Olympus paid the financial advisor US$620 million “to obtain 100% ownership of Gyrus.” How did it decide how much to pay? Olympus and the financial advisor apparently split the difference.

Fungi and food kits
The statement also gave some details about three other acquisitions for which Olympus paid 73.4 billion yen (US$962 million at the current exchange rate). The three Japanese companies were in businesses far outside Olympus’s core competencies in cameras and medical equipment, and had capital funds of only 1.4 billion yen (US$18.7 million).
One enterprise focuses on reduction of carbon dioxide emissions by petrochemical plants. Another enterprise manufactures food kits and cookware for microwave ovens, while a third cultivates fungi as health and beauty products.
“One of the business objectives of our company is expansion by new business creation, hence we acquired these companies and made them subsidiaries in order to gain possession of their promising technology in the health care field,” said the Olympus statement.
The company’s board of corporate auditors, it said, also concluded that “no dishonesty or illegality is found in the transaction itself, nor any breach of obligation to good management or any systematic errors by the directors recognised.”
But all the care taken in undertaking the transactions and the acquisitions’ bright prospects came to naught because of the “worsened external environment following the 2008 recession,” the statement said. On 31 March 2009, said the statement, Olympus wrote down the value of the three companies by 55.7 billion yen, down 76% from the acquisition price.
Shareholder revolt
The Olympus statement failed to calm the waters. Olympus is controlled by institutional investors that tended to keep out of management’s way, but the gravity of the revelations is apparently jolting them out of their passivity.
Nippon Life Insurance, which owns 8.4% of Olympus, has asked the company to take “prompt action” to address investor distrust. Other principal shareholders include the Bank of Tokyo-Mitsubishi (4.98%) and Sumitomo Mitsui Banking (3.13%).
Foreign institutions and individuals collectively own 27.7% of Olympus – the Government of Singapore Investment Corporation has a 2.55% stake – and they are up in arms too. US-based asset manager Harris Associates sent a letter to the board and to the Tokyo Stock Exchange seeking an independent investigation of the acquisitions.
The UK’s Serious Fraud Office is also said to have been brought into the fray because some of the payments for the Gyrus deal was coursed through British institutions. Woodford says he has furnished the agency with documents, including the PwC report.

On 21 October, Olympus issued a terse statement acknowledging receipt of letters from some shareholders. “We are now preparing responses, and any information that should be disclosed will be promptly made public,” it said.