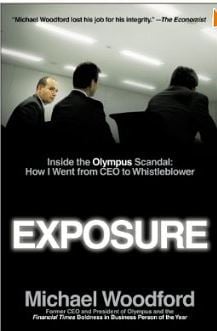 With three decades working for a Japanese camera giant under your belt, you are rewarded for leading the growth of the European arm with promotion to company president – the first non-Japanese national ever to hold the post. The fact your new role starts on April Fool’s Day does not seem an omen.
As you’re finding your feet, an article appears in an obscure Japanese magazine, Facta, making allegations that your company had spent some US$1 billion on ‘minuscule’ businesses and writing off the costs in the subsequent year. The magazine also asks questions about the ‘bizarre acquisition’ of a British company at a large premium over its market capitalisation, with US$700 million in unexplained advisory fees linked to the deal.
But your CEO brushes aside your questions, as do other senior colleagues. Suspicious, you decide to start a paper trail, writing a formal letter to the company’s compliance officer.
As you turn up the heat, your new board colleagues get tense. A second article appears in Facta, mentioning ‘anti-social forces’, a euphemism for organised crime. The rest of the Japanese media studiously ignores the story, as do shareholders.
You start to fear having an ‘accident’. You suspect you are being followed. Any chance of a proper investigation could be buried with you.
Lacking hard evidence and aware of your fiduciary duties not to gratuitously damage the company but unable to ignore potential criminal activity, you start to copy your communications to the auditors – not just in Japan, but their colleagues in Asia, Europe and the US, as well as the audit firm’s global chairman.

True Story
This might all sound like the start of a fictional thriller but it is in fact the true story of Michael Woodford (pictured above), the former CEO of Olympus, who in 2011 turned whistleblower on the Japanese company, which eventually admitted it had hidden losses of some US$1.5 billion in corrupt transactions and accounting scams.
He has now documented his story in a book, Exposure: Inside the Olympus Scandal. Readable and fast-paced, it details his growing suspicions that something was badly awry at Olympus, his battle to investigate, and the company’s attempt to appease him by briefly appointing him as CEO in September 2011 before unceremoniously dismissing him a fortnight later as both CEO and president.
The book then covers his ultimately successful fight to expose what happened despite legal action from Olympus and the enormous travel and legal costs he himself had to shoulder.
Talking to Accountancy Futures at his London flat, Woodford has both good and bad to say about the role of the various accountants and financial professionals involved in the events.
As he worked to build up a picture of the accounting manipulation and transactions that had taken place, he says he worked closely with three accountants in the UK.
“They were very helpful. They helped me frame and structure the communications I started to write when I felt I needed to formalise and evidence what had gone on. They were very important in ensuring that we framed the questions in a way where they were very specific and left no wriggle room.”
Woodford has not named the three, other than to say they were Olympus employees. ‘They are very ethical and straightforward people and very committed to the company,’ he says.

But those with board responsibility come in for harsh criticism. In the book, Woodford recalls his sacking in a tense encounter with Hironobu Kawamata, the director and executive officer who was in effect the CFO. Kawamata demanded Woodford hand over his phones and laptops, and ordered him to leave his apartment.
“What shocked me is that he was so gratuitously hostile in the minutes immediately following my dismissal,” says Woodford.
Tsuyoshi Kikukawa, the man Woodford had succeeded as president, remained chairman and assumed the new title of CEO. As well as serving as president for 10 years, Kikukawa had been head of the finance department. Kikukawa subsequently admitted filing false financial reports and, along with two other executives, at the time of going to press faces a prison term of up to 10 years.
Along with the rest of the Olympus board, Kawamata resigned in February 2012; he was not implicated in the criminal proceedings.
In Japan, says Woodford, it is not uncommon to find people in senior financial positions who haven’t had conventional accountancy training because managers are rotated around roles.
Questioning KPMG
As his worries grew, Woodford copied his letters to the Olympus board and to the Ernst & Young partners globally, which at the time enabled him to share his then unproved concerns with an external party without breaking his fiduciary duty to the company by going public. This transparency also provided some comfort at a time when he felt his safety was threatened.
But he adds: “I still find it hard to fathom how the auditors missed the fraudulent nature of these bizarre and sizeable transactions.”
EY took on the audit of Olympus in 2009, after the departure of KPMG. Michael Andrew, KPMG’s global chairman, spoke out in November 2011 on the Olympus scandal, saying: ‘We were displaced as a result of doing our job,’ and ‘It’s pretty evident to me there was very, very significant fraud and that a number of parties had been complicit.’
But Woodford asks in his book: Having parted company with Olympus, why did KPMG not shout longer and louder? Second, if KPMG had been so concerned, how could it have signed off Olympus’s 2009 accounts without qualification?
Woodford also asks why the issue didn’t come up in its handover of the audit to Ernst & Young. “I was surprised by how such extraordinary transactions did not raise alarm,” he says.
Ernst & Young declined to comment to Accountancy Futures on its work for Olympus.
Role of Auditors
Since his official resignation from Olympus in November 2011, Woodford has given up on his attempt to take over the company with a new group of directors, and won a £10 million (US$15.3 million) settlement for unfair dismissal and discrimination. He has also been travelling the world speaking about the lessons to be learned from the scandal, especially in terms of corporate governance.
“Many of your readers may not agree with me, but I do believe in the mandatory rotation of auditing firms,” he says, adding that he favours terms of between seven and 10 years. “As human beings, if you know somebody else is going to come along and have another look, then you’d be much more cautious.”
He also has concerns about auditors selling consultancy services. “I know this creates loud and heated views, but the trouble is the world keeps seeing scandal after scandal.”
Woodford points out that Japanese companies spend only around half as much on audits as do Western companies. Some very large companies in Japan use very small audit firms – a “red flag,” he says, adding that “for capitalism to work, you need robust, vigorous external audits.”
Woodford also stresses the importance of independent mechanisms for whistleblowers to air their concerns while offering them comfort about their personal situation.
Although he is celebrated as a whistleblower, Woodford points out that in fact he was not the true whistleblower who gave the story to Facta. He describes in his book his meeting late in the saga with this unnamed individual over cans of Sapporo beer and Ritz crackers in a Tokyo flat.
“He or she is the hero of the story. I had a foreign passport. I could get out.”
Media Power
What shines out from Woodford’s book is the insight that the only effective mechanism for exposing Olympus was the media. Corporate governance procedures, auditors, regulators, law enforcers and shareholders all failed.
Woodford lavishes praise on Facta, but has harsh words for the rest of the Japanese media. Nervous about taking on a Nikkei company, they ignored the story until it had been broken in the Western media – when Woodford, the day after his dismissal, called a Tokyo-based Financial Times journalist to give him the scoop of his life.
The Financial Times, Wall Street Journal, The New York Times and Thomson Reuters, he says, should be credited with putting significant resources into the story and running with it.
Woodford feels sentences for white-collar crimes should be stiffer to discourage corporate fraud. “Executives should suffer custodial sentences, rather than just the companies paying fines. White-collar crime does have victims.”

It is clear that Woodford has a love and respect for Japan, and he dedicates his book to his ‘musketeers’: Koji Miyata, former head of Olympus’s medical business, and spokesman and translator Waku Miller, who supported him through the events.
But he says: “There is a very disturbing side to corporate life in Japan. That’s why I’m very sceptical about its prospects.” His concerns range from its culture of deference and ‘yes men’, to the peculiarities of its ownership structures such as the cross-shareholding system, in which large companies all own shares in each other. ‘I think that there are probably other Olympuses out there in Japan,’ he says.
What about the rest of the world? He says: “We’re still not in a position where we should feel comfortable or complacent.”
Woodford says he has not been short of job offers, but has preferred to spend time talking and writing about his experiences and the issues that have arisen from them – not just corporate governance, but deeper issues such as the idea of “moral capitalism.”
And, of course, he’s been writing the book, which he says nearly killed him. “It’s not sanitised and I’m very explicit. I refer to lots of names and people.” Three sets of lawyers reviewed the book.
“I think it will appeal to a lot of people in business, and the finance sector in particular,” he says. “You wear a suit and go to work, send emails, go to meetings, work on Excel spreadsheets – and suddenly you find yourself in this John Grisham-like novel.”
About the Author
Chris Quick is Editor of twice-yearly journal Accountancy Futures and Editor-in-Chief of monthly magazine Accounting and Business, two publications of ACCA, the global body for professional accountants. This story was first published in Accountancy Futures Edition 06.
Read more on
governance fraud management