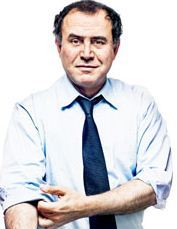 Known in the economics profession as one of the most consistently bearish voices that correctly predicted the coming of the financial crisis that enveloped the world in 2008-09, Nouriel Roubini, professor of economics at New York University’s Stern School of Business – or, as he is more commonly known, ‘Doctor Doom’ – cuts a rather unimposing figure in real life.