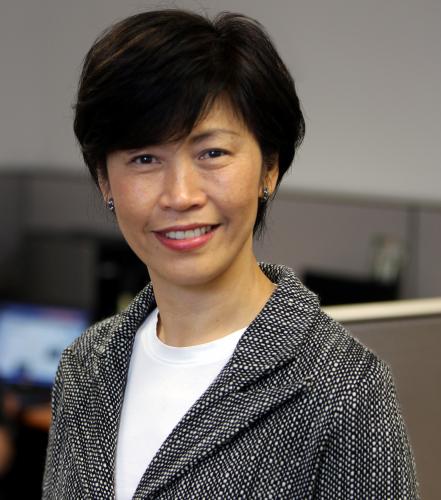 In Korea, working wives (and some husbands) can now do their grocery shopping while waiting for the subway train. Home plus, the brand name used by the UK’s Tesco grocery chain in the country, is using wall spaces in subway stations to plaster life-size pictures of grocery items, each of which has a QR code (Quick Response code, which is a matrix barcode that is readable by mobile phone cameras).

Commuters take a picture of the QR code (you can see an example of a matrix barcode on the right) of the item they want. An app in their smart phone connects with Home plus’s virtual store, which deposits the ordered item into the customer’s virtual shopping cart. Once the customer pays for the purchases online, the items are bagged and delivered to the shopper’s home – shortly after or even before the train reaches his or her destination.
The response has been amazing. Home plus says that 10,287 consumers used the service shortly after the campaign was launched in June. The number of registered Home plus online shoppers rose 76% while online sales surged 130%. The company now claims to be No. 1 in the online market and a close No. 2 to erstwhile leader Shinsegae Group offline.
It’s a whole new world out there. Japan and Korea are at the forefront of m-commerce – the use of mobile phones to sell and pay for goods and services. “But they are very proprietary arrangements,” says Lam Wai Yee, Managing Director at Monitise Hong Kong, which licenses an open-source technology platform for mobile banking and payment services. “That has not made it easier for other parts of the world to adopt.”
Lam (pictured, above left), aims to bring what she calls “any-to-any” mobile phone banking applications to Asia, including m-commerce, which would work on over 2,700 mobile phone models and devices and not just for Japanese and Korean phones, as is currently the case with the proprietary m-commerce systems in those two countries.  It has announced a new service called ‘Simply Tap’ in the UK, which involves using mobile phones to instantly buy products advertised on billboards and printed media.
Monitise is moving more cautiously in Asia. Its Hong Kong unit has signed an agreement with PCCW, a leading Hong Kong mobile phone company, that will allow PCCW subscribers to recharge their prepaid mobile phone accounts over their smart phones. The scheme will come into effect “in the coming months” as the two parties and JETCO, which provides payment services to the majority of banks in Hong Kong, await the go-ahead from the Hong Kong Monetary Authority. Monitise is also talking to the city's other telecom companies on offering the same service to their users.
It’s a tiny undertaking, but “we believe one small step for now is a giant step for mobile money,” says Lam. “We are laying the foundations. If you don’t do it right, if you do something badly, it affects consumer confidence. Then next time when you want to launch new service, it’s going to be that much slower.”
Impact on Financial Management
The emergence of m-commerce and mobile phone banking has implications on marketers, sales teams and, yes, CFOs. When individual and corporate customers pay for goods and services in real time, the concept of ‘receivables’ and ‘payables’ take on new meanings. The flood of money going into retailers’ bank accounts, for example, could require new ways of cash flow management and optimized usage of idle cash.
Citi, the global bank, recently conducted an experiment in Korea. “We implemented an application wherein both the person selling the goods and the person giving the cash both have access to a simple tool, and they used their mobile phone to initiate a transaction,” recounts Sandip Patil, Managing Director and Region Head, Asia Payables and Receivables at Citi.
Once the customer authorized payment via the mobile phone, Citi immediately settled the transaction and notified both buyer and seller. “We eliminated cash completely,” says Patil. “We automated reconciliations because it was a transaction which was fulfilled in a fraction of a second end-to-end.”

The seller did not have to wait for days for the cheque to clear, having been paid instantly, which did wonders to its Days Sales Outstanding (DSO) metric – although by the same token, the buyer saw his Days Payables Outstanding (DPO) shortened as well, which is a negative metric.

M-commerce and mobile phone banking do have potential implications on cash management, agrees Lam. “Certainly one of the attractions to the merchants [in Hong Kong] that we are selling the prepaid top-ups to is that the money will be settled in their bank accounts twice a day,” she says. “I don’t know how CFOs will deal with payables, though.”

“I firmly believe in the potential of mobile, especially when you come to emerging markets like Asia,” adds Patil. “In the West, [cash management] has evolved over a period of time, starting with paper and then to electronic and on to mobile. In Asia, we now have an opportunity to go from paper to mobile directly. That will mean a lot of benefits and a lot of competitive advantage to companies in Asia.”

Consumer Acceptance
It will not happen overnight, though. The technology for mobile phone banking and commerce is actually already available, says Lam. “But will we implement it today? No. I think we have to work in tandem with the legal and financial framework. Otherwise, it would be ungovernable.”
Consumer acceptance is essential. “The computer and the Internet could do a lot of things in terms of shopping, but it took a while for consumers to trust enough to provide credit card details or bank account details,” Lam recalls. “It’s exactly the same with mobile money.” People have to be made comfortable with the new service in stages.
“What we are doing in Hong Kong now is starting that journey of getting consumers used to using their mobile phones to do transactions.” says Lam. “We start with something that is very safe, which is topping up their mobile phones. The money is transferred not potentially to anybody but to trusted merchants. It’s a relatively small value and it’s a very secure registration process, so the amount of exposure is limited.” Even if you lose your phone and fail to notify the bank or telecom operator, the money loss in terms of top-ups is only minimal.
If you notify the bank or the telecom operator of the loss, though, access to the mobile money is immediately stopped. And you can make top-ups only for a certain number of times up to certain amounts in one day -- beyond that, Monitise and the telecom operator will stop the transactions. The customer's pattern of spending is also tracked; top-up transactions that are unusually high and frequent will bring up red flags and cause the telecom operator to contact the customer via email or another telephone number, in case the mobile phone has been stolen.

When consumers are convinced top-ups are safe, “we will move on and push more services,” says Lam. People will be able to pay monthly bills, for example, or transfer small amounts to others in Hong Kong via their mobile phone. From there, Monitise hopes to expand the envelope further to remittances in another country, and on to m-commerce and business-to-business banking and payments.

“We don’t see the limitations [as stemming from] technology,” she reiterates. “It is all about consumer acceptance and consumer behaviour and building a supportive ecosystem around mobile banking. We have to be very careful about how we develop [mobile phone financial services], about how we work with the banks and telecom operator partners to make sure that consumers and everyone else are on the journey to acceptance.”
Regulatory Moves
There is also the regulatory aspect. Central banks and other monetary authorities are generally supportive of mobile banking and m-commerce, but they are understandably wary of putting stress on the financial system.

The regulatory approaches vary from country to country. In the UK, cheques will be phased out in two years, which should boost the use of mobile money. In India, cheques will probably continue to be used for many more years, in part because companies and consumers demand their use.

“But the Reserve Bank of India has already established guidelines to create a mobile equivalent for every bank account and an infrastructure wherein mobile wallets will be able to exchange value with each other,” says Patil. Monetise has developed a jacket that transforms a mobile phone into a ‘mobile wallet’ that can be tapped on a reader, which then debits or credits money from the bank account associated with that wallet.

Other jurisdictions are considering allowing non-bank institutions such as remittance services providers and even the telecom companies themselves to engage in mobile phone banking, within certain limits and under certain conditions. There are also different approaches to how money is to be accessed by the customer, with some monetary authorities open to the use of mobile phones as wallets while others will have the phone brought to a bank, where the teller will issue paper money according to instructions in the app on the mobile phone.

Despite all the legal and consumer issues, Lam says she expects a “tipping point” in mobile banking and m-commerce in Hong Kong in two years. Patil anticipates an “explosion around mobile payments” in India as early as 2012. “The young will not be afraid of this technology,” he predicts. “Older people will still be trying to figure out whether they want to use this tool, because they have grown up in a particular manner.”

When that happens, CFOs and their company's cash management system better be ready.
About the Author
Cesar Bacani is Editor-in-Chief of CFO Innovation.
Read more on
cash and liquidity accounts receivable digital transformation accounts payable