Mining the Metrics of Board Diversity 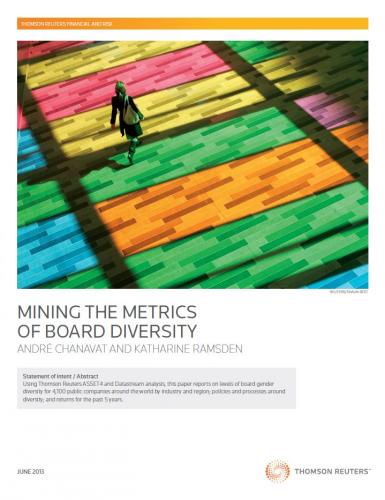 This report from Thomson Reuters shows that since 2008 there has been a steady increase in the presence of women of corporate boards. For 2012, 59% of the companies report to have women board members (compared to 56% in 2008).
The report states that although Asian companies have shown increased implementation of processes for equal opportunity, Asia is far behind compared to EMEA’s (Europe, Middle East and Africa) and the Americas when it comes to women on boards.
In Asia, Australian companies stood out with the greatest improvement, followed by Indian and South Korean firms.The Australian improvement is driven by the approach “comply or explain” implemented in January 2011, where companies should disclose the objectives for achieving gender diversity in their annual report.
Key Findings