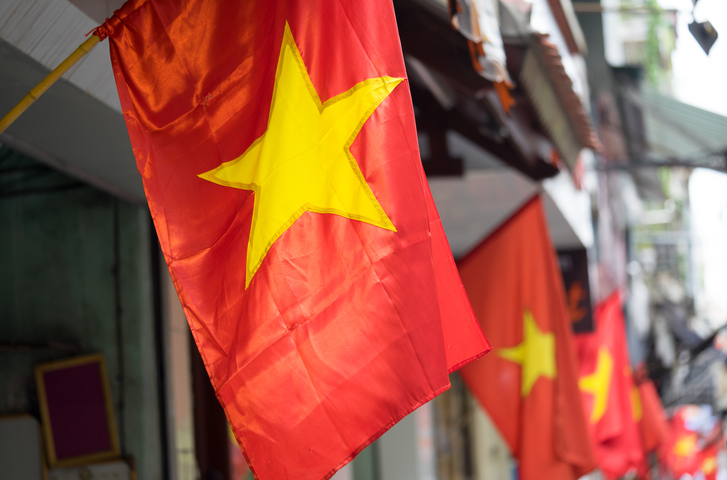 2016 has been a successful year for Vietnam, continuing its emergence as both a leading ASEAN economy and a global player. Falling commodity and energy prices and severe water shortages early in the year caused Vietnam’s failure to reach its goal of 6.7% GDP growth, but with a year-on-year growth of 6.2 percent the country still managed to outpace most of its neighbors.

For 2017, the government has set Vietnam’s GDP growth target at 6.7%, while growth levels for the following years are expected to reach levels of at least 7%. In large part, this growth will be fueled by increased trade.

The large majority of FDI in 2016 to Vietnam flowed to manufacturing and processing, followed by automobiles and motorbikes, and real estate

Last year, Vietnam signed a free trade agreement with the European Union (EVFTA), eliminating trade tariffs by 2018, among other provisions. While the presidency of Donald Trump resulted in a setback, due to US withdrawal from the Transpacific Partnership (TPP) agreement, Vietnam continues to diversify its economic partners, such as through increased ASEAN integration, the proposed Regional Comprehensive Economic Partnership (RCEP, covering 3.4 billion people and which may emerge as the alternative to the TPP), and the EVFTA. 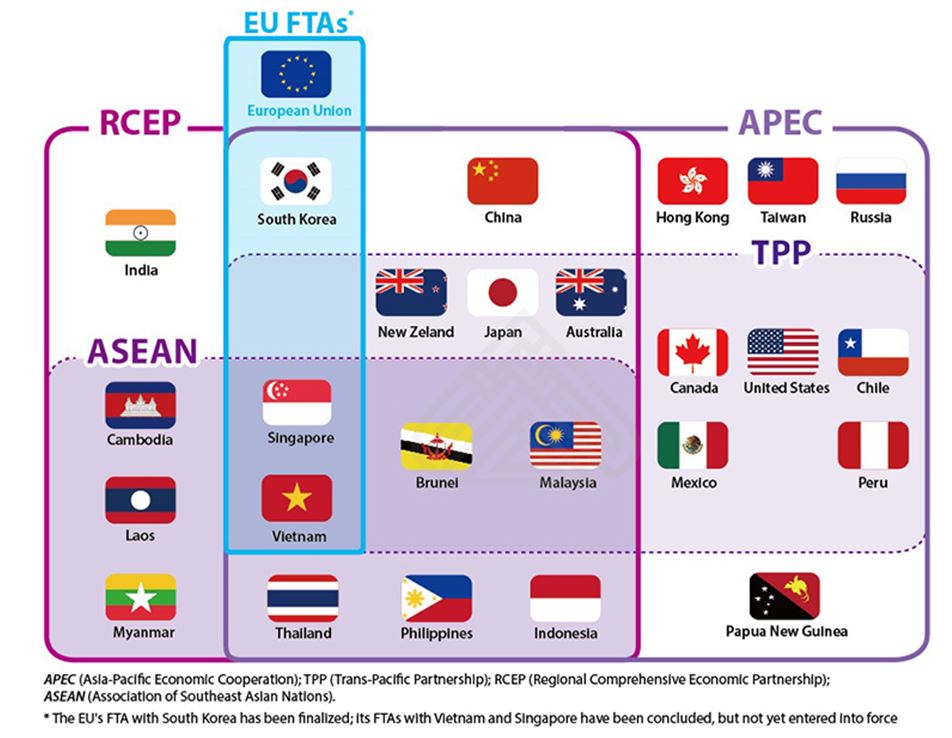 As Vietnam is becoming increasingly accessible to foreign investments, FDI inflows have seen a steady and strong increase over the previous years. In 2016, foreign direct investments climbed to US$24.4 billion, representing 9% growth compared with 2015.

Of these, US$15.1 billion flew to 2,556 newly registered projects, while 1,225 existing projects added a total of US$5.76 billion to their capital. Foreign investors purchased stakes in 2,547 companies for a total value exceeding US$3.4 billion.

The Republic of Korea was the main provider of FDI in 2016. Largely due to investments by electronics giant LG, the country invested over US$7 billion in Vietnam.

In total, investors coming from 95 countries capitalized on investment opportunities in Vietnam. Most investments came from within Asia; the only non-Asian country in the top 10 of FDI providers is the British Virgin Islands. 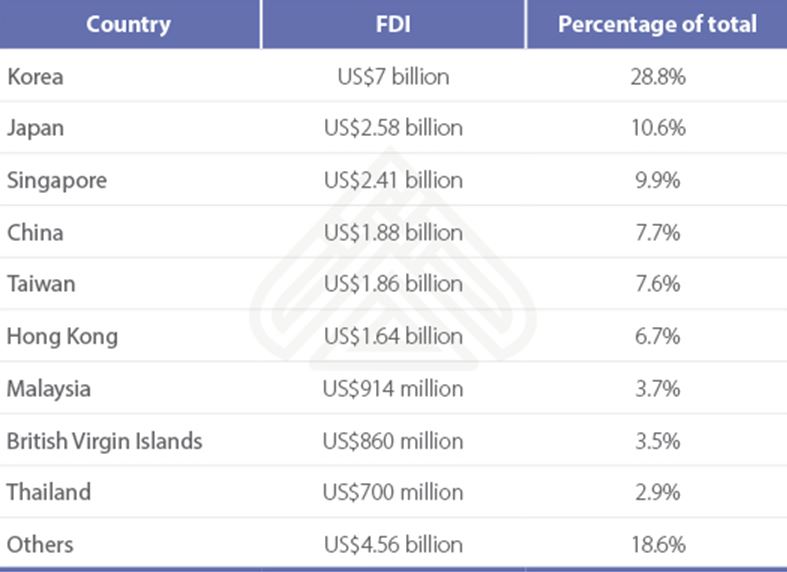 Looking at international trade, Vietnam grew exports by 8.6% year-on-year, following the impressive 29% growth rate in 2015. Consequently, it turned its trade deficit into a surplus in 2016, totaling US$2.1 billion, the highest in six years.

With the increased trade – exports and imports totaling US$176.57 billion and US$174.47 billion, respectively – the country’s export-to-GDP ratio is currently standing around 90%, one of the highest in the world.

The top export destinations for the first seven months of 2016 were:

Imports were mainly coming from China (28.9%), South Korea (18.5%), ASEAN (14%), and Japan (8.6%). The EU as a bloc is one of Vietnam’s largest export markets as well. Similar to the country’s trade with the US, Vietnam’s trade balance with the EU is highly positive.

2016 showed the further establishment of Vietnam as a main manufacturing hub. The large majority of FDI (US$15.5 billion) flowed to manufacturing and processing, followed by automobiles and motorbikes (7.8%) and real estate (6.9%).

Ho Chi Minh City was the main recipient of FDI, accounting for US$3.4 billion (14%) of total FDI inflows. Other popular destinations were Hai Phong, Hanoi, Binh Duong, and Dong Nai, which received FDI totaling US$3 billion, US$2.8 billion, US$2.4 billion, and US$2.2 billion, respectively.

In 2017 Vietnam is poised to continue on its current trajectory. After years of significant growth, Vietnam’s GDP per capita has reached an estimated US$2,215 at the end of 2016, an increase of US$106 compared with the year before. For 2020, the government has set a target of US$3,000 per capita.

This follows the general trend within Vietnam, where the middle class is slowly becoming more populous. Standing at 16 million in 2014, the population within or above the middle class is expected to double to 33 million by 2020, according to the Boston Consulting Group.

Combining this with a young and large workforce that is more and more becoming high-skilled, there are no signs of Vietnam slowing down in the foreseeable future.

Vietnam’s growth pattern shows striking similarities with China’s development a decade ago. Similar to China during that time, new opportunities are emerging as the growing middle class accumulates more disposable income. As such, now is a better time than ever to enter the market and capitalize on opportunities arising from increased local consumption.

With a large demand for foreign expertise, this brings opportunities in several sectors, including education, healthcare, food and beverages, and e-commerce, among many others.

Having said that, it is important to remember that certain sectors have restrictions in place on FDI, while import and export regulations in Vietnam also differ from other countries.

Aside from domestic consumption, there are many areas requiring large investments to catch up with regional standards.

For example, opportunities are abundant in the infrastructure sector. Ho Chi Minh City’s congestion is increasingly becoming more problematic and the city is desperate to improve this situation in the coming years. Another example is renewable energy, the development of which is expected to lift off in the coming years.

These types of projects are frequently open to private investors through Public Private Partnerships, giving them the opportunity to get involved in public projects through extensive cooperation with public institutes.

Primarily, however, Vietnam has established itself as a manufacturing hub. As wages in China have reached a point where manufacturers are moving elsewhere, Vietnam remains highly competitive. Minimum wage levels range from VND 2,580,000 to VND 3,750,000 (US$113 to US$165) a month, depending on the region.

What puts Vietnam a few steps ahead of its competitors is its openness. Besides the country’s integration with ASEAN and the free trade agreements resulting from this bloc, it has also agreed on its own FTA with the EU,deepening its ties with its largest non-Asian trading partner.

As Vietnam is undergoing rapid development, regulations are frequently updated. It is key to stay abreast of the latest rules

And while the US has pulled out of the TPP, Vietnam is trying to make sure its growth in global trade will not stagnate by shifting focus to the proposed Regional Comprehensive Economic Partnership. As such, it is set to see a continued flow of investment coming into the country’s garment and electronics manufacturing, among others.

Setting up manufacturing facilities in Vietnam requires in-depth information on the various regions in the country. With special economic zones in place that often offer incentives to foreign investors, choosing the right location can result in significant tax exemptions.

For example, export processing enterprises located within export processing zones are exempt from paying custom duties and VAT on exports, while operating in an industrial zone can also lead to various tax incentives.

The trajectory of Vietnam is highly encouraging. The country’s ease of doing business is improving, while still leaving room for improvement. In the World Bank’s Doing Business in 2017 research, Vietnam ranks 82nd out of 190 countries, up nine positions from 2016.

This can largely be attributed to the government’s efforts. Besides its involvement in the mentioned FTAs, Vietnam is also actively privatizing its state-owned enterprises. A recent study by Baker McKenzie estimates that IPO activity in the coming years will see a surge, steadily rising from US$172 million in 2016 to US$948 million in 2019.

Since 2015, nearly 170 state-owned companies have been privatized and this trend will continue in the coming years. For example, Sabeco, a beer maker with an estimated value of US$2 billion, is set to be privatized in 2017.

While all this creates many opportunities for foreign investors, one should always be aware of difficulties. As Vietnam is undergoing rapid development, regulations are frequently updated. It is key to stay abreast of the latest rules.

That being said, these regulatory updates are more often than not encouraging, not discouraging, more FDI. Over the past years Vietnam kept giving investors reasons to invest in the country. There is no reason to expect that the country will stop doing so in 2017.

Dezan Shira & Associates is a specialist foreign direct investment practice that provides advisory services to multinationals investing in emerging Asia. This article first appeared in Vietnam Briefing, and was re-edited for clarity and conciseness. For further details or to contact the firm, please visit www.dezshira.com.