The Top Ten Largest Companies By Country in Asia 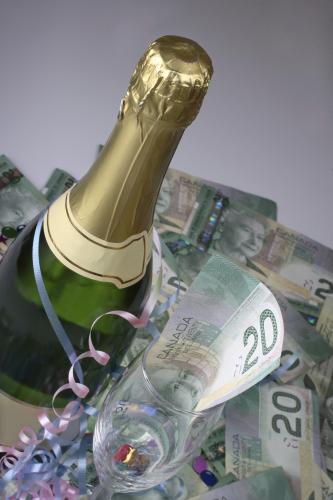 It is virtually impossible for any economy to function and prosper without a strong banking system. That is why investment strategist and academic Paul Schulte, who now heads Schulte Research Ltd, prefers to look at Asia’s markets through the lens of their banking systems.
So what is the former star analyst at China Construction Bank International Securities, Lehman Brothers, Nomura International and ING Baring Securities seeing these days? He is generally sanguine. Schulte estimates that the loan-to-deposit ratio of banks in Asia ex-Japan is at 95%. It is when LDRs get to 115%-125%, he says, that “the banking system is toast.”
On this measure, Hong Kong, Malaysia, the Philippines and Singapore are safe – their banking system’s loan-to-deposit ratios range from 70% to 90%, and their tangible leverage (the ratio of assets to equity) is less than 20 times.
But Indonesia is approaching dangerous territory. The loan-to-deposit ratio of its banks is approaching 100%, although their tangible leverage is less than 10 times.
And China? Looking at the banks’ formal balance sheets, Schulte pegs the industry’s loan-to-deposit ratio at around 70% and tangible leverage at about 16 times – safe territory.
But things go awry when China’s notorious wealth management products are factored in. These are financial instruments offered by some of the smaller banks, but not reflected in their balance sheets, and thus considered to be part of the shadow banking system.
Counting the wealth management products, Schulte estimates the Chinese banking system’s  LDR at closer to 110% and their tangible leverage at more than 20 times. That’s danger with a capital D and flapping red flags.
Country Champions
Schulte believes that “bank credit drives economies, not the other way around,” that liquidity flows determine corporate solvency, and that real estate, foreign exchange and equities are tied together by domestic credit. “Get the credit and liquidity trends right,” he says, “and the rest follows.”
If he is right, the fortunes of the banks can foretell the fortunes of Asia’s individual economies and their largest companies (which typically are exposed to most of that economy’s sectors) – and by extension the vendors, suppliers, customers and smaller enterprises that are dependent on or heavily influenced by these big enterprises.
When CFO Innovation asked Thomson Reuters to examine its database of more than 30,000 Asia-headquartered listed companies to generate a list of the biggest companies in sales (see Asia’s Top 100 Companies: Are You on the A-List?), we also asked for a top ten country list.
The results are instructive. Banks hold pride of place in many countries, including China, Indonesia and Malaysia. Even if they are not on the Top Ten list (as they are not in Hong Kong, the Philippines and South Korea, for example), banks are crucial players in commerce as sources of finance and allocator of capital. And as Schulte suggests, they are key drivers of economic growth, solvency and profitability.
China: Banking on a Bailout
According to the Thomson Reuters database of China-headquartered listed companies, four of the top ten biggest companies in sales are banks. The Big Four – Industrial and Commercial Bank of China, China Construction Bank, Agricultural Bank and Bank of China – are also the country’s most profitable companies, edging out enterprises with larger sales such as oil majors Sinopec and PetroChina.
Click image to enlarge
China’s Ten Largest Companies in Sales

So is China and its leading companies (and CFOs) in deep trouble? Schulte is surprisingly sanguine, despite the formal and informal banking systems’ estimated 110% LDR and high tangible leverage.
That’s because “the skeleton of a workout has been in put in place in the past five weeks,” he explains. “What we’re seeing in China right now is an underwriting of the financial system.” Witness, for example, the recent activation of Chinese asset management companies (AMCs) and the expected IPO of one of those AMCs in Hong Kong.
Schulte also thinks it is significant that banks are now allowed to issue preferred shares, which he says are attractive to investors skeptical of getting a fair shake as minority shareholders of common shares. The idea of using up to US$400 billion in central bank holdings of US Treasuries in the bailout is under discussion.
Schulte estimates that the banks, most of them smaller players, have issued the equivalent of US$9 trillion of wealth management products, of which 40% are leveraged. The banking regulator is forcing the banks to put back those wealth management products on their balance sheets, which would mean that the lenders will need to massively raise their capital to remain solvent.
The Big Four are believed to have issued fewer wealth management products, but they may be hit by soured loans to local governments and property developers that have gone on a construction binge of white-elephant public buildings, unneeded roads and bridges, and costly housing projects whose overinflated value may collapse as the government’s property cooling measures bite.
While China embarks on a costly banking rescue, it may also need to prop up the property market and perhaps launch a fiscal stimulus program because you cannot clean up the banks in a deflationary environment. As a result, Schulte expects that China’s sovereign debt “may rise by 15-20 basis points of GDP in 2013-2015.”
But that’s manageable, he believes, adding that the ranks of China’s billionaires will also be  expected to do ‘national service’ and help with the banking bailout by buying the preferred shares and the AMC IPO, among other things.
“Now we just have to keep our hands crossed, everything crossed, to make sure that we don’t get any social disruption in China,” Schulte adds. “But I think if you arrest enough people [as a number of high-level officials have been in a recent crackdown on alleged corruption], I think you can calm people down.”
Fine Weather for Hong Kong?
Economists have lately resumed their optimistic take on China, with Bank of America recently raising its 2013 GDP growth forecast to 7.7%. Rajiv Biswas, Asia Pacific Chief Economist at IHS Global Insight, expects growth to accelerate to 7.9% in 2014 on the back of moderate recovery in the US and stabilization in Europe, two of China’s most important export markets, and continued fiscal stimulus and market reforms.
That can only be good news for Hong Kong, whose banks’ loan-to-deposit ratio of 70% and fiscal surplus puts it squarely in Schulte’s ‘healthy’ economies category. Hong Kong companies can leverage not only on Chinese growth, but also an increase in export demand from the US and Europe.
Biswas forecasts GDP growth in Hong Kong to reach 4% in 2014, a marked improvement from the lackadaisical 1.5% in 2012 and the expected 3.1% this year.
The exporters and other outward-looking companies on Hong Kong’s top ten list (Noble Group, Li & Fung, Cathay Pacific, among others) and China-oriented enterprises (e.g., China Mobile and China Unicom) will be among the major beneficiaries.
Click image to enlarge
Hong Kong’s Ten Largest Companies in Sales 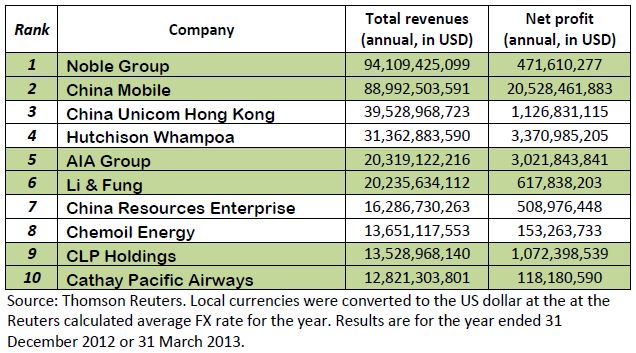 ‘Gut-Wrenching’ India
“India is basically turning out to be a catastrophe,” worries Schulte. “It is going through a very gut-wrenching kick in the stomach.” Its banks’ loan-to-deposit ratio stands at more than 120%, placing the industry in toxic territory.
GDP growth for the FY 2012-2013 year was just 5% (measured on factor cost basis), the weakest in a decade, notes Biswas of IHS. “India has continued to struggle with chronic fiscal deficits, magnified by large fuel and fertilizer subsidies.” General elections in 2014 add political uncertainty to the volatile mix.
The toll on India’s largest companies is shown by big losses at Tata Steel and Essar Oil, No. 8 and No. 9, respectively, on the top ten list.
Click image to enlarge
India’s Ten Largest Companies in Sales 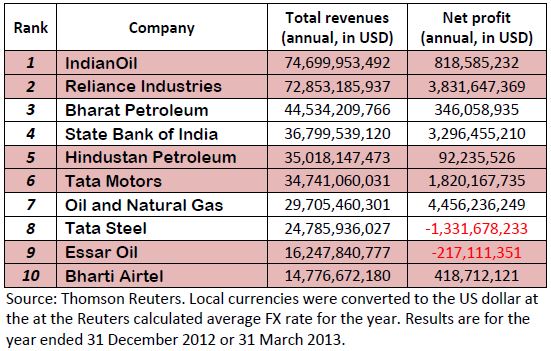 Indonesia: Difficult Time
After winning investment-grade credit rating in 2011 and becoming a market darling, Indonesia was hit hard by the return of risk aversion arising from expectations the US will withdraw quantitative easing, causing the rupiah to depreciate to its lowest level since 2009.
Indonesia’s foreign reserves have now declined by 18% to US$93 billion while the current-account deficit widened to 4.4% of GDP in the second quarter, from 2.6% in the first quarter. The trade balance, in surplus since mid-2012, is now in deficit as commodity prices fell (Indonesia is a major exporter of coal, petroleum products and palm oil).
“Indonesia is going through a very difficult time,” says Schulte, noting that the loan-to-deposit ratio of the country’s banks is piercing 100%. That’s a red flag for the economy, especially against the backdrop of a widening current account deficit.
Click image to enlarge
Indonesia’s Top Ten Largest Companies in Sales 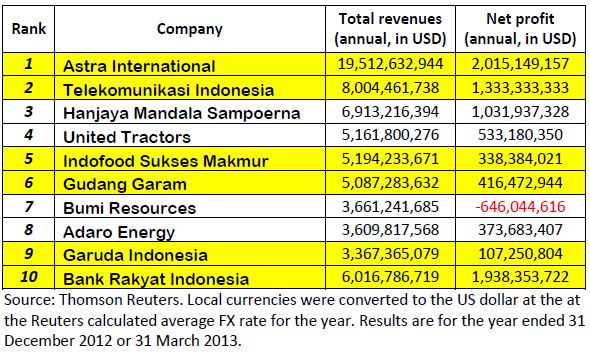 Malaysia, Philippines and Singapore: Safe and Healthy
The loan-to-deposit ratios of these three Southeast Asian economies range from 70% to 90% and their tangible leverage is less than 20 times – putting them in safe territory. Their current accounts as a percentage of GDP are also a healthy 3% to 6%.
The Philippines is a new entrant to the safe and healthy circle, having achieved investment-grade credit rating only this year. But IHS Global Insight forecasts the highest GDP growth for the country this year – 6.8%, the same as in 2012 – and 6.2% in 2014.
Malaysia is expected to expand 4.6% in 2013 and 5% in 2014, while Singapore will recover to 2.8% growth in 2013 (from just 1.3% last year) and 3.6% in 2014. Their respective Top Ten largest companies, particularly the commodities and electronics exporters, may find the wind at their back if the US and Europe, as well as Japan, continue their recovery and thus import more.
Click image to enlarge
Malaysia’s Top Ten Largest Companies in Sales 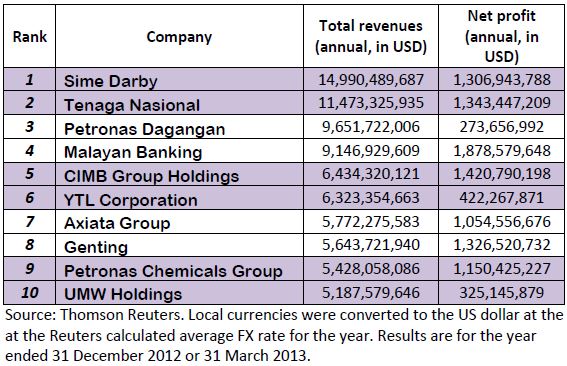 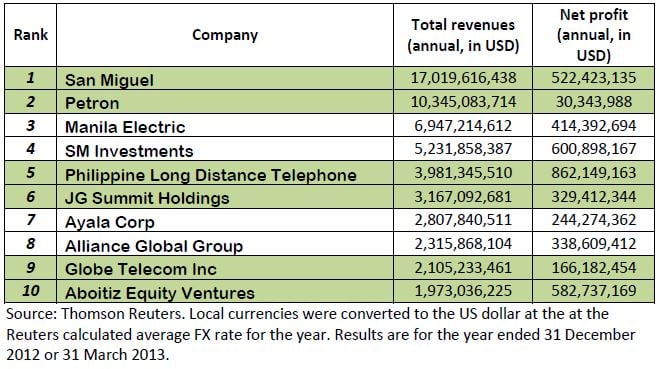 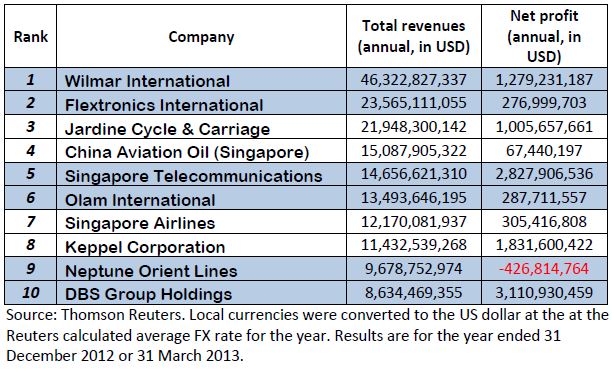