Think Like a Turnaround CFO: What to Do in a Liquidity Crisis 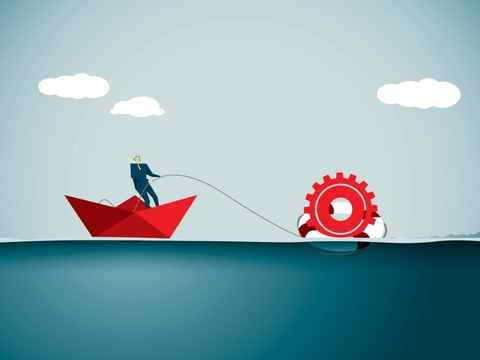 Money is everything in business, particularly when it is running out. A liquidity crisis caused by a crimp in cash flow is the beginning of the end for most companies. To turn around the dire situation before it's too late, board directors, CEOs, and investors typically turn to the CFO.

But the CFO may be part of the problem. And even the most competent CFO may not have the requisite skill sets to assist with a turnaround.

Here, a different type of CFO is needed. Such individuals must have the fortitude and grace to make tough decisions regarding layoffs, lenders, and suppliers that the incumbent CFO may be disinclined to make, given the emotional considerations.

CFOs at companies that get into trouble share some common characteristics: They don't understand the cost structure, have people issues they haven't dealt with, and aren't properly addressing the difficult situation with management, investors, and suppliers

Sharp negotiating and workforce management skills also are needed to keep cash flowing. In addition to extending accounts payable cycles, shortening accounts receivable cycles, finding new sources of external and internal capital, and reducing the timing of debt obligations, it may be necessary to decrease the size of the workforce.

It's a tall order for anyone, particularly an incumbent CFO. "The person whose job it is to keep the train on the tracks does not often have the same skills to get the train back on the tracks," explained Michael Epstein, global managing principal for restructuring services at consultancy Deloitte.

In the nick of time

Many distressed companies reach out to CFO turnaround specialists. Among those specialists is James O'Connor Jr., founder and president of turnaround consultancy The O'Connor Group in Bedford, Massachusetts.

"By the time I arrive on the scene, most clients are concerned about hitting the payroll — the precipitator to a bankruptcy," O'Connor said. "They're about a week away from serious trouble and need someone like me with crisis management capabilities to identify the problems and priorities and execute a plan to keep the business afloat."

While the incumbent CFO is aware of the perilous circumstances, that person often struggles to react, said Christopher Pizzo, senior vice president of Deloitte's corporate restructuring group. "They freeze, panic, and shut down," said Pizzo, who has served as an interim CFO on multiple occasions.

Russ Blain, a Seattle-based turnaround consultant, believes CFOs at companies that get into trouble share some common characteristics: They don't understand the cost structure, have people issues they haven't dealt with, and aren't properly addressing the difficult situation with management, investors, and

"They think they will weather the storm, but they're wrong," he said.

Even the best CFOs may not be cut out for the thorny tasks ahead. "Basically, there are three types of CFOs,” said Doug Yakola, a senior partner and leader of McKinsey & Company's North American RTS practice, which works with companies on transformations and restructurings.

There is the deal-making CFO, “who is good at balance sheet restructuring and putting together M&A transactions, the accounting CFO who is good at closing the books and reporting, and the operating CFO, someone who really understands the purpose and mechanics of the business."

To regain financial health, said Yakola, “a distressed company needs a CFO with all three skillsets."

Rather than deal with what lies ahead, some CFOs make a peaceful exit and find a more secure situation. "Typically, the CFO is gone by the time I arrive on the scene or is soon to be shown the door," O'Connor said. "By then, the company has stretched and borrowed and is in late decline. Alternatives are in mind."

"We're like an emergency room surgeon looking at a person who has come in after a bad car crash," he added. "To save them requires a rapid assessment of the condition followed by decisive actions."

Entrusted with turning around a troubled company's financial condition, those who have served as interim CFOs said that the first priority is to develop internal sources of cash by more efficiently managing the working capital.

"This is not about long-term strategy; this is about correcting the company's near-term situation by regaining control over the cash flow pipeline, laying the groundwork for the long term," O'Connor said.

Yakola, who has been an interim CFO, agreed. "The most immediate task is to look at the organization’s cash levels and whether or not its cash forecasting estimates are accurate," he said.

If this is not the case, cash conservation and generation are in order. "You have to open the lines of communication," Pizzo said. "You have to create a vendor relations strategy, letting the vendors know what is happening, why they're not getting paid, and when they can expect payment.”

“Obviously, you need to be diplomatic so they continue shipping to you, and you also have to be empathetic as they have a business to run, too."

“If I tell them we have to reduce headcount 45%, I also point out how we will go about it — determining which job functions are critical to the organization’s long-term growth and which aren't. I'm a mercenary there to do a job, with confidence in the outcome"

Nevertheless, tough actions are called for. "I'll do things like look through the list of vendors to determine which ones can really hurt the organization on an ongoing basis, and then shut off payments to the rest," Blain said. "Obviously, this results in a lot of nasty calls.”

“I then make sure to overcommunicate with these companies, pledging that we'll do our best to make a payment by a particular date. Fortunately, some suppliers don't even realize we've cut them off until six months later, which buys us time."

Yakola said that interim CFOs often must perform triage. "Almost always there are multiple things that need to be put back on the rails to help the business survive the short term," he explained. "These include whether or not the company is accurately closing the books, and whether its budget matches the going-forward business plan."

Pizzo pointed out that when companies are confronting distressed conditions, evidence sometimes indicates that the former CFO had provided late, inaccurate, and/or misleading financial reporting to lenders and investors. "Consequently, the interim CFO has to re-establish lines of communication to regain their trust," he said. "We explain that things will get worse before they get better, but we point out that we have a plan to restore cash flow.

"Now is the time for more communication, not less," Pizzo said. "They want facts, and it's our job to provide them."

Often the first question from the debt funds is, "Why not simply liquidate the business?" said Blain. "In some cases, they may be right. But if I believe the business still has legs, I tell them I have a plan, re-emphasizing the company's intrinsic value and what it will take to get it back on its feet.”

“If I tell them we have to reduce headcount 45%, I also point out how we will go about it — determining which job functions are critical to the organization’s long-term growth and which aren't. I'm a mercenary there to do a job, with confidence in the outcome."

Generally, it takes several months to restore a company's financial condition, although O'Connor once spent five years as the interim CFO of a midsize manufacturing business on the brink of bankruptcy.

"The company had completely tapped out its credit lines, vendors had stopped shipping it goods, and its main bank had just pulled funding," he recalled. "The lenders were putting pressure on the CEO to quickly recover the debt, fearing the organization’s assets were losing value daily."

He negotiated first with the vendors, which agreed to resume shipping. He subsequently persuaded the bank to forgo interest and restore funding for a three-month trial period. In both cases, he underlined the fact that the company was the second-largest employer in the town and its demise would generate devastating economic outcomes, like lost employment and tax revenue.

He then turned his attention to the underlying problems that had resulted in the company's dire straits. "It was an old guard manufacturer that had designed and built its own machines for years, with this vision of being vertically integrated," O'Connor said. "It had all this inventory and hardware that was choking it to death, and didn't comprehend that its real value was in satisfying customers."

As the interim CFO, he sold off several equipment lines to generate immediate cash and outsourced this production to suppliers on a less-capital-intensive basis. That was three years ago. Today, the company remains in business and has a more traditional CFO.

"I see myself as truly interim, and people inside and outside the company know I'm not permanent. I'm putting in stopgap measures to move the organization forward”

Asked for the toughest turnaround situation he has confronted, Blain was quick to answer. "I was once brought in as an interim CFO at a company owned by four separate venture capital firms," he said. The firms were having trouble getting along with one another in such a difficult situation.

"On top of that, there was a common shareholder who kept making noise, and an employee management team fighting to preserve their [stock] options. Worst of all, both the VC firms and the debt fund could veto any deal."

Balancing these competing interests while plotting a comeback strategy required Solomon-like perspicacity. "If you're financing a company that is growing, it's relatively easy to reach consensus since the valuations are going up and everyone wants in," said Blain. "Forcing someone to write off part of their investment is never an easy call, nor is trying to raise money from existing investors."

Nevertheless, he pulled off a delicate balancing act. "It took six months of showmanship and listening to each person's needs to devise a plan that was suitable to all the parties, even though no one got everything they wanted," he said. "Ultimately, we reduced the labor force."

Blain promised employees that the workforce reduction would be deep enough to constitute a once-and-done exercise, which provided a measure of relief. "You need to shoot straight, whether you're dealing with investors, management, or the debt funds," he said.

The company made a small profit in 2017. "Either you get everyone to commit to the restructuring plan and you ride herd on it for many months," Blain said, "or you liquidate or sell the company and are out of there in no time."

Interim CFOs need to plan for the future as much as they focus on the urgent needs of the present, Yakola said.

"I see myself as truly interim, and people inside and outside the company know I'm not permanent," he explained. "I'm putting in stopgap measures to move the organization forward.”

In fact, he said, one of the most important conversations he has with the CEO and the board is “the plan to hire a new and more permanent CFO."

Russ Banham is a freelance journalist and author based in the US. This article first appeared in FM Financial Management, which is published by the Association of International Certified Professional Accountants. The AICPA combines the strengths of the American Institute of CPAs (AICPA) and the Chartered Institute of Management Accountants (CIMA).