Ten Export Processing Zones You May Not Know 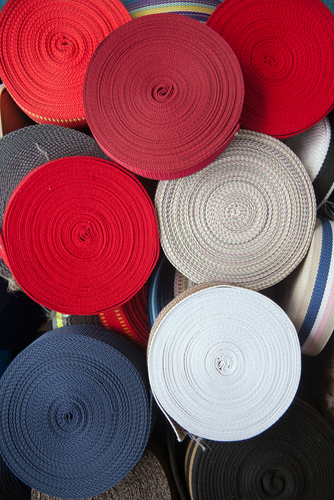 As global manufacturing starts to spread its tentacles across Asia, export processing zones – once the sole preserve of China – are springing up all over. They are conceived as ideal for emerging markets because they help develop worker skill sets and begin the development of supply chain infrastructure.
Export processing zones are also popular with foreign investors because they negate the need to import directly into the host country (avoiding import duties), and assist with being able to deliver a cost-effective product by offering VAT rebates on any locally sourced components.
Ten to Consider
Here we list ten of Asia’s most dynamic export processing zones – and almost certainly most of them you will not have heard of. That may be about to change. Even Myanmar is getting in on the act. The 2,400-hectare Thilawa Export Processing Zone will be completed in 2015, with significant investment from Japan.
Click image to enlarge
Mapping the Zones

The reason we highlight these ten zones – a list that just scratches the surface of the number of export processing zones across Asia – is to provide some sort of idea of the growth potential for global manufacturing that Asia is now collectively putting into place.
China tends to dominate media attention about export manufacturing, and often other countries get left in the shade.
Take Bangladesh. Generally considered a poor and backward country, it is in fact upgrading big time. Honda is investing more into its auto manufacturing capabilities there, while it is generally not well known that the country is the world’s second largest producer of textiles. Consequently, the Chittagong Export Processing Zone is well up to speed with numerous well known global brands established there.
India, Indonesia, Vietnam
The Madras EPZ, near Chennai on India’s east coast, is also thriving – it is a serious player in electronics and IT. Indonesia has been making impressive strides with its EPZs, both on its own (Tanjung Emas EPZ), and in partnerships with Singapore at the Batam Free Trade Zone, at 71,500 hectares, one of the world’s largest export processing zones.
But as an Australian manufacturer told me recently, “When I say I’m on a business trip to Surabaya, no one has ever heard of it.”  Surabaya is Indonesia’s second largest city, a deep water port and with a population of over 3 million people. It is one of the many gateways to Southeast Asia and just 1,200 kilometers from Darwin in Australia.
Vietnam’s Tan Thaun EPZ is also thriving. Located near Ho Chi Minh City, this export processing zone (and others like it in Vietnam) is set to explode with business investments – many expected to be adding manufacturing capacity for the China market. Vietnam is coming into economic integration with ASEAN and the Vietnamese government is following that up with a reduction of profit taxes to 20%.
Other EPZs in China and ASEAN members Malaysia, Myanmar, the Philippines and Thailand are facing equally bright futures. The table below contains details about the ten export processing zones we believe are particularly dynamic:
Asia’s Export Central 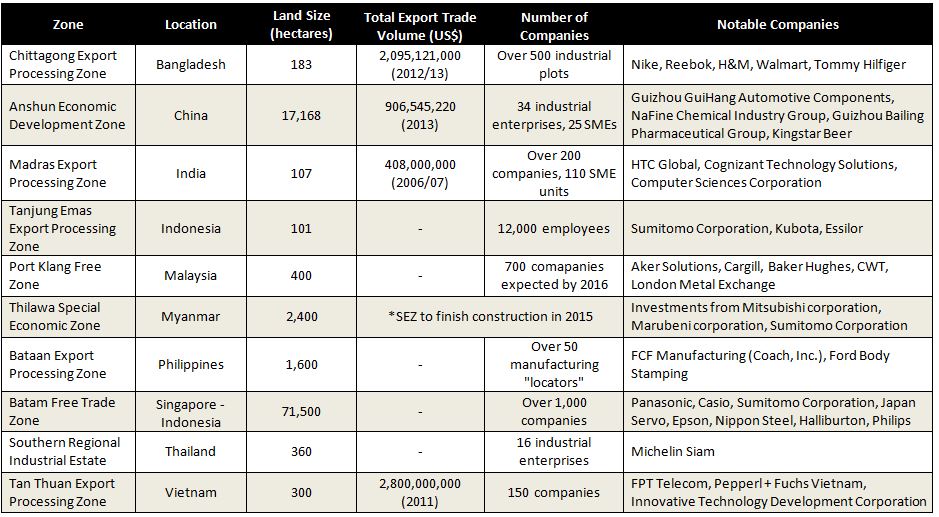 Myanmar, Too
The sheer size of the still to be completed Thilawa EPZ in Myanmar is also impressive. Major investors are pouring in from Japan and South Korea to get it up to speed. Which countries border Myanmar? China and Bangladesh, with India a stone’s throw away.
The Japanese, already in Bangladesh in a big way, will leverage their facilities there to help develop Thilawa. Within a decade, motorbikes driven on the roads in China will have been manufactured and assembled in Myanmar. China’s minimum wage in Guangdong (including social insurance) is US$1,200 a month. In Myanmar it is US$37.
While the chart we provide is far from inclusive, the message is clear. Southeast Asia is gearing up to be the manufacturing export hub for the global consumer market – and that includes manufacturing to service the Chinese.
About the Author
Chris Devonshire-Ellis is the founding partner and principal of Dezan Shira & Associates, a specialist foreign direct investment practice that provides advisory services to multinationals investing in emerging Asia. This article was first published in Asia Briefing and was re-edited for clarity and conciseness. For further details or to contact the firm, please visit www.dezshira.com.
Photo credit: Shutterstock