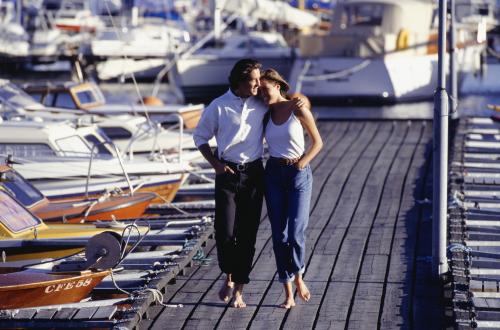 “Let me tell you about the very rich,” F. Scott Fitzgerald once wrote. “They are different from you and me.” Knowing exactly how different the rich are has made fortunes for many companies, including those selling to Asia’s growing legions of affluent consumers. But then came the global recession. Have the region’s high net worth individuals (HNWIs) become even more different?

Apparently so. Merrill Lynch and Capgemini’s fourth annual wealth report, released recently, reveals major changes in the investment habits and consumption of luxury goods by Asia Pacific’s millionaires in 2008. Their ranks have diminished, to start with. The region’s population of HNWIs fell 14.2% to 2.4 million people, and their wealth decreased 22.3% to US$7.4 trillion. Many of them, particularly in Hong Kong, no longer had at least US$1 million in investable assets, the minimum requirement to qualify as an HNWI.
This was not supposed to happen. In the beginning of 2007, the Asia Pacific region was relatively unaffected by the slowdown in North America’s economy, backed by robust GDP growth and resilient stock market performances. Prior to August 2008, it was assumed that the recession would not impact the luxury sector, which in its entirety had seen double-digit growth this past decade.
The good news is that HNWI investing and spending are now noticeably on the rise as stock markets and economies, particularly those in China and India, show signs of recovery and growth. Despite the setback in 2008, the wealth report says the concentration of wealth and size of Asia’s upper-class segment will outpace that in the rest of the world. By 2013, it forecasts, Asia will surpass North America in terms of growth in wealth and, eventually, in the number of HNWIs who live and work there.
Where the Rich Are
The question for the purveyors of financial services and luxury goods and other companies catering to Asia’s wealthy is how to best position their firm in the face of these forecasts and trends. Which economies will have the most number of wealthy people? How big is the addressable market? What are the investing and spending behaviour of Asian HNWIs? Has the recession changed patterns of consumption?

Figure 1. Breakdown of Asia Pacific HNWI Financial Assets, 2006-2010F (Enlarge image)
Source: Merrill Lynch, Capgemini. (“Asia-Pacific Wealth Report 2009”)
From 2003 to 2008, HNWI wealth had soared in the Asia Pacific. In 2007, five of the world’s fastest-growing HNWI populations were found the region’s markets, with India and China in the lead. That same year, the number of HNWIs in the Asia Pacific had grown by 8.7% to 2.8 million people, who between them boasted combined wealth of US$9.5 trillion (an increase of 12.5% from 2006).
The projected rate of annual growth for 2008 was 7.9%, but the financial crisis threw that off course. Globally, the market that experienced the greatest decline last year was Hong Kong. The number of HNWIs there fell 61.3% to 37,000 people; their combined wealth plunged 65.4% to US$181 billion. Following closely in second was India. After scoring the fastest rate growth in 2007 with a 22% increase, India saw its HNWI populations shrink by 31.6% to 84,000 people. Of the heavyweight countries, Japan was relatively resilient, with a mild HNWI decline of 9.95%. But this was because the expansion of the HNWI population was already capped by the 2007 economic slowdown in Japan and a weakening stock market there.
The tables below shows where Asia’s rich consumers were in 2008 and where they will be in 2013. 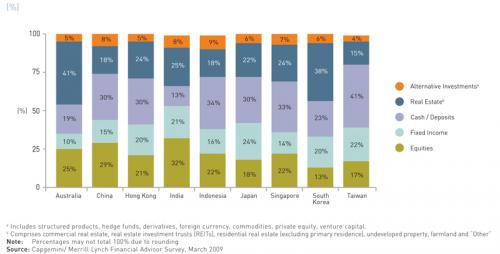 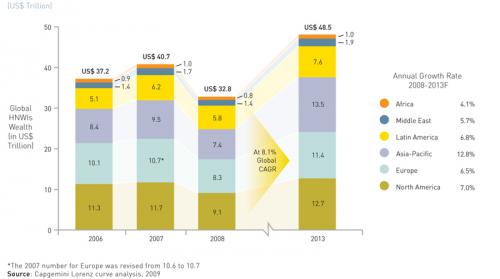 Figure 3. HNWI Financial Wealth Forecast, 2006-2013F (by Region) (Enlarge image)
Source: Merrill Lynch, Capgemini. (“World Wealth Report 2009”)
Investing Trends
In the short term, HNWIs are expected to allocate towards capital preservation rather than high returns. As 2010 approaches, the HNWI’s investment portfolios are likely to shift with improving economic conditions, moving tentatively towards equities and alternative investments. Fixed-income holdings may increase slightly, as cash and short-term deposits are moved back into longer-term, higher-yielding investments.
Regarding total real estate investments, Asia Pacific HNWIs have shown more preference for residential properties than their counterparts in other regions (55% versus 45%) – a trend that has been prominent in Asia even before the financial crisis. Of less interest is commercial property, which suffered from corporate downsizing and cost-cutting, declining rentals and higher vacancy rates. Asia’s penchant for real estate reflects a long-standing preference for tangible assets and tendency for opportunistic buying.
Of particular interest to banks and wealth management firms is the apparent disenchantment of HNWIs with their services. According to the wealth report, 46% of HNWI respondents said they have lost trust in their primary financial advisor. The same proportion said the same about their wealth management firm. Seventy eight percent said they have lost trust in the financial system’s regulatory bodies.
The study found that financial advisors often overestimate their role in client retention. They attribute customer defections to loss of trust and confidence in the firm, for example. In fact, according to clients, it was often their trust in the advisor that prompted their flight.
Going forward, firms that are able to show clients a strong value proposition are likely to be able to recapture this market. Here are some lessons from 2008:
Before the financial crisis, traditional strategies like good customer relationships and trust were sufficient, said Arvind Sundaresan, Head of Sales, Asia Pacific at Capgemini. That’s no longer enough. Customers are now choosier and more wary. What is needed going forward are a significant increase in transparency in buying and servicing from investment firms, and renewed trust by investors, recommended Sundaresan.
Looking ahead, firms also need to review assumptions in their value proposition, and see how it must change with the times. Changing HNWI perceptions and preferences in 2008 also indicate:

Amidst the financial crisis and economic uncertainty of 2008, HNWIs significantly reduced their investments of passion and lifestyle spending. Where they did give in to luxury buying, it was often towards assets with long-term, tangible values.

Last year, luxury goods makers, auction houses and high-end service providers sounded warnings of falling global demand. Still, the Forbes Cost of Living Extremely Well Index 2009 indicates that prices on luxury goods saw a general increase of 12% between 2007 and 2008.
Of the indulgences HNWIs did dabble in, most favoured in 2008 were luxury collectibles (automobiles, yachts, jets) followed by fine art, and thirdly, jewellery, gems and watches. Business jet orders for Bombardier dropped 42% last year, and the worldwide numbers of used jets placed on the resale market rose by 62%. Luxury car demand plummeted, but in emerging markets, Bentley sales went up (53% in China, 18% in the Middle East). The growing trend for luxury items appears to be moving towards the reasonably priced and more-familiar bracket.
Fine art was more popular amongst Europeans (30%) and Latin Americans (27%) than Asians (23%). Investors from emerging markets have driven art sales, but prices have been reduced worldwide, making it more affordable for serious collectors and connoisseurs.
Jewellery, gems and watches have maintained popularity amongst HNWIs in Asia and the Middle East. Their sales exceeded the pre-crisis figures in 2006, perhaps because HNWIs perceived these baubles to have more long-term value. Sotheby’s Geneva auction house reported record sales of around US$15 million for watches. Amongst them was a Patek Philippe watch that sold for US$1.55 million. Crisis or no crisis, sales figures and interest for this category of luxury goods remain strong in the Asia and Middle East.
Looking ahead, scaling back on HNWI spending is expected. But business consulting firm Bain & Company estimates in its “Luxury Goods Worldwide Market” study that the global luxury market, despite a 20% decline in sales for 2009’s first two quarters, will stabilise during the second half. This is expected to bring the net decline to 10% for 2009 overall.
“This year's declines are hitting both the top and bottom lines of luxury goods companies,” said Claudia D'Arpizio, a Bain & Company partner and luxury goods expert based in Milan. “Luxury shoppers are spending less, traveling less and feeling less confident.”
The decrease in travel was certainly felt in 2008, as 40% of HNWIs worldwide reduced such spending, according to Merrill Lynch/Capgemini’s 2009 World Wealth Report. Lengthy, lavish holidays were traded for briefer trips or a trade down in luxuriousness, noted Pricewaterhouse Coopers in a December 2008 report. In addition to dropping the extravagance or booking closer departure dates, many took a ‘wait-and-see’ approach, opting to stay in or close to their home country.
The same trend can be expected looking ahead, with ‘aspirational’ non-HNWI holidaymakers perhaps cutting their travelling budget altogether. As the economy improves, however, travellers will likely increase visits to further destinations, take lengthier trips and resume booking long-haul flights.
Conspicuously, the only lifestyle spending category to see an increase in 2008 was health and wellness. Sixty four percent of HNWIs in the Asia Pacific region said they increased such spending – visits to high-end spas, purchases of fitness equipment and also preventative medicine procedures (including full body scans).
In conclusion, HNWIs and Ultra-HNWIs will indeed continue to indulge passions and live well, but economic uncertainty can be expected to further curtail luxury spending in the next year or two. Reports of record lavish purchases have received much publicity, such as the ‘sale of the century’ – an Yves Saint-Laurent collection that sold for half a billion dollars in February this year – yet Christie’s forecast is that auction sales are likely to continue dwindling in 2009. Sellers may want to wait for market improvement before putting up their pieces for auction. Nevertheless, the quality and rarity of a piece (art, antique or jewellery) could continue to drive interest.
Name-brand luxury goods can expect resilience among the wealthiest consumers, owing to their exclusivity and brand heritage appeal – such as Hermes and Cartier. For the HNWI and mass-affluent, however, ‘affordable’ luxury goods may still be impacted, as these purchases are perceived to be a needless extravagance in tough times.
About the Author
Angie Mak is the online editor at CFO Innovation.
Read more on
forecasting strategy setting