The Renminbi in 2017: Trump Can Cause More Weakening – Up to a Point 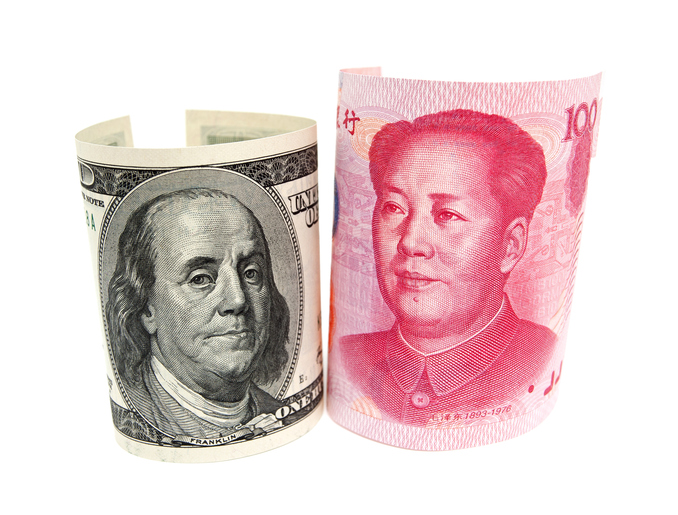 Since early October, the CNY has continued its slide against the USD, touching 6.92 last week – the weakest since 2008

Losing out against the US dollar

Since early October, the CNY has continued its slide against the US$, touching 6.92 last week – the weakest since 2008. The steady weakening against the greenback (and thus also against the Hong Kong dollar) stimulates further financial capital outflows from China and raises fears about further depreciation.

The CNY depreciation reflects the strengthening of the US$ on global FX markets, driven by investor expectations that the US Federal Reserve will raise interest rates as early as next month.

The dollar soared by another 4.4% in effective terms since Donald Trump was elected US President amid hefty increases in US bond yields. Markets are betting on wider fiscal deficits, stronger growth and higher inflation in the US (the latter in part because of more protectionism).

It is worth pointing out that the CNY has actually depreciated less against the dollar than other major currencies (see chart below). As a result, China’s trade-weighted, effective exchange rate has remained broadly constant in this period.

Exchange rates vs. the US dollar
% change since October 1 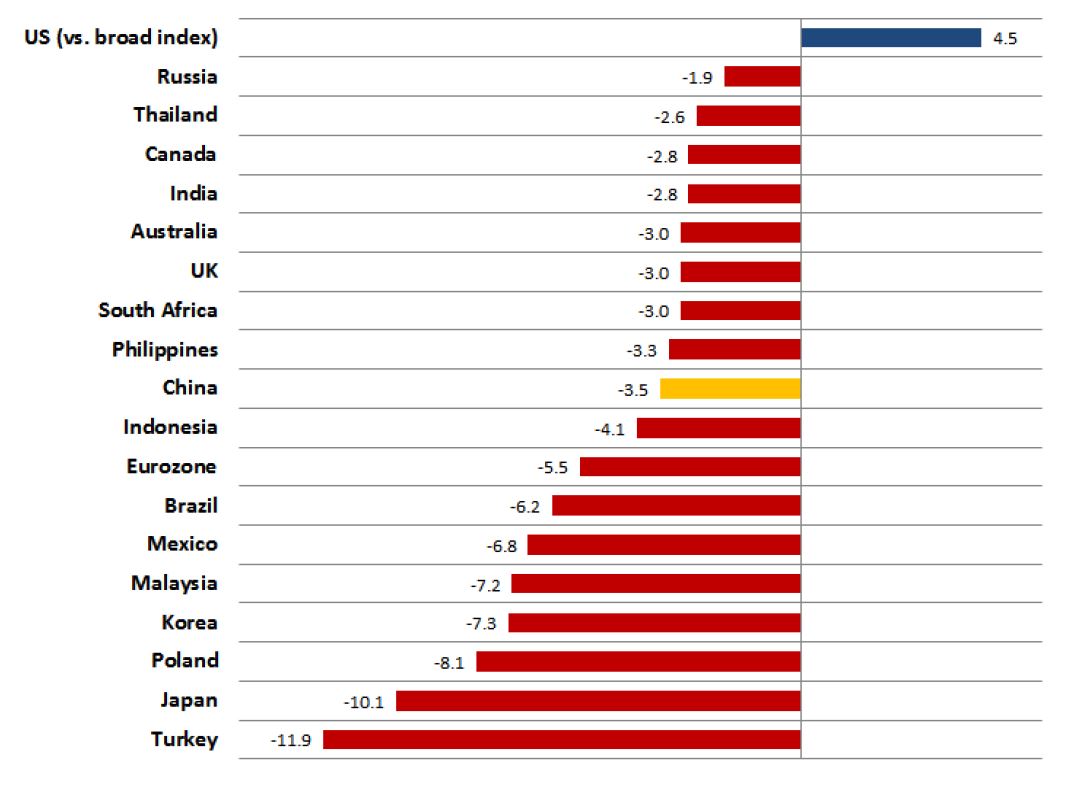 When discussing China’s currency, it is important to remember that, while market pressures matter, in the end the CNY is still in the hands of policymakers. For much of the period 2005-15, the central bank allowed the CNY to appreciate gradually, while intervening in the FX market to control the pace of appreciation amid current and capital account surpluses.

The emergence of capital outflows changed things. Traditionally, tight capital controls kept outflows to a minimum. In recent years, following steps to partially open up the capital account, financial outflows have grown in size, reflecting a desire by Chinese companies and households to diversify their portfolios, the government’s ‘going out’ strategy, and expectations of CNY depreciation.

We see a significant risk of further increases in US market interest rates and a further boost to the dollar if our 'economically benign' Trump scenario materializes . . . We see a smaller, but not insignificant, risk of an ‘economically malign’ Trump scenario, where the opposite is true

In late 2014, when net financial outflows became large enough to put depreciation pressure on the FX market, the PBoC did a 180-degree turn. Since then it has walked a fine line between allowing some depreciation in the face of pressure while resisting significant CNY weakening.

Between late 2015 and July 2016 the central bank allowed the CNY to slide, not only against the USD, but also in trade-weighted terms. In our view this was because the PBoC decided that the CNY had become overvalued, a judgement that we agreed with at the time.

But by mid-2016, China’s real effective exchange rate (REER) had moved sufficiently close to macroeconomic ‘fair value,’ according to our assessment. As we had expected, the central bank changed policy again in July, keeping the CNY broadly stable against the basket, even as it allowed some further depreciation against the dollar at times of greenback strength.

However, a policy of curbing depreciation pressures can be costly in terms of FX reserves and can be potentially unsustainable. Since early last year, China’s reserves have declined by US$677 billion, adjusted for valuation effects, or 17% of the total.

And the PBoC keeps on dipping generously into its FX reserves. Adjusted for valuation effects, China’s FX reserves fell by US$40 billion in October, after broadly similar declines in earlier months. This was despite a solid current-account surplus.

Net foreign direct investment flows have turned negative this year. But the largest contributor to the net overall outflow was net financial outflows of US$67 billion. While these financial outflows are still significantly lower than at the turn of the year, when they were around US$130 billion per month, the recent pace is not sustainable indefinitely, not even with US$3.1 trillion in reserves remaining.

Going forward, depreciation pressures on the CNY are likely to remain. External pressures include the prospects of higher US interest rates and a strong US$. Clearly, uncertainty about this is particularly elevated at the moment, as it is unclear how macroeconomic policies will change under the Trump Presidency.

But even if US bond yields give up some of their recent gains as markets reprice the impact of the Trump administration on US growth and inflation, we expect US yields to stay high.

Moreover, we see a significant risk of further increases in US market interest rates and a further boost to the dollar if our 'economically benign' Trump scenario materializes, with the impact of fiscal expansion overshadowing that of protectionism.

We see a smaller, but not insignificant, risk of an ‘economically malign’ Trump scenario, where the opposite is true.

On the domestic side, the FX pressures in China reflect continued sizeable financial capital outflows in a context of portfolio rebalancing, easy monetary conditions and anxiety about the exchange rate.

As to the composition of financial outflows, in Q2 (the latest period for which data is available), Chinese companies stopped repaying foreign loans (in net terms) and foreign inflows turned positive. But foreign lending by Chinese banks picked up again.

We do not expect the US to impose across-the-board tariffs. But, in all, we expect US policy in a Trump administration to be a negative for China's exports

And outflows by Chinese companies and households (including the structurally negative “errors and omissions” of the balance of payment) continued apace, reaching US$78 billion. The latter component is backed by a stock of relatively mobile holdings in China's financial system that we earlier estimated at around US$19 trillion.

In the face of such outflows, there may be a case for reducing or even abandoning FX intervention and letting the FX market pressures drive the CNY weaker. This would limit or even halt the bleeding of FX reserves and could reset expectations for the CNY going forward.

However, while capital account factors point to further depreciation, there is no obvious case, in terms of the real economy, for significant further trade-weighted depreciation. Indeed, China still runs a healthy current account surplus and the global market share of its exports is still rising.

In such circumstances, a significant depreciation may lead to overshooting, which is unhelpful for the real economy.

This is an issue for China’s policymakers, as they tend to employ a ‘real economy’ perspective on exchange rate policy. A rapid, large depreciation could also compromise confidence in the CNY, spark turmoil in global FX markets and garner unfavorable reactions from politicians around the world.

The case for resisting a significant depreciation that is not warranted in terms of the real economy would also fit with the government’s objectives to rebalance the economy, improve the industrial structure and move up the value chain.

While there is still much uncertainty about Trump’s China stance, there are some conclusions that we can already draw. We do not expect the US to impose across-the-board tariffs. But, in all, we expect US policy in a Trump administration to be a negative for China's exports.

Trump will also be pushing for a stronger CNY, whether or not he sticks to his campaign promise to brand China a currency manipulator. Some wonder if this could make China more likely to allow depreciation, in order not to be seen to be doing what the US wants.

We do not think so. History suggests otherwise.

Equally important, a Trump administration will put much more emphasis than the Obama one on shrinking the US trade deficits – both the overall one and the one with China. At the same time, the appreciation of the dollar – which would continue in an ‘economically benign’ Trump scenario – will make it harder to bring these external deficits down. This will add to pressure for a stronger CNY, since China would prefer a stronger CNY over restrictions on its exports.

In all, taking into account that China’s real economy does not really need a weaker exchange rate any more, considering the spectrum of choices, the PBoC’s overall cost- benefit analysis is unlikely to point to a major depreciation of the CNY.

Putting it all together: Our slightly revised forecast

Thus, in an environment of higher US bond yields and accompanying upward pressure on the dollar, we expect the PBoC to continue to walk a fine line between allowing some depreciation in the face of pressure while resisting significant CNY weakening.

In our baseline we expect capital inflows and outflows to become more balanced in 2018. We now have the CNY ending 2018 at 6.85

To contain FX pressures, we expect efforts to more strictly enforce existing capital-account restrictions and probably implement additional ones, following the recent ban on using UnionPay to transfer money to Hong Kong to buy insurance products. These are in line with recent PBoC comments.

The government could also take lower profile steps such as slowing down outbound investment by SOEs and banks’ overseas lending.

What are the risks? In an ‘economically benign’ Trump scenario, US interest rates would rise faster and US dollar strength would exert more depreciation pressure on the CNY (domestic issues and pressures could have the same impact).

As discussed above, though, a stronger dollar would make it even harder for the Trump administration to meet its objective of lowering the US trade deficit. This will, either economically or politically, limit the depreciation of the CNY.

An ‘economically malign’ Trump scenario will have a major impact on China’s economy. However, that will also have a quite unfavorable impact on the US economy and will lead to lower US interest rates. Our Global Scenario Service simulations suggest a modest additional depreciation of the CNY against the US dollar, in such a scenario.

Over the medium and long term, with prices in China still only around half of those in the US, trend real effective exchange rate (REER) appreciation should continue, as long as catch up and relatively rapid productivity growth continue – even if the pace of trend REER appreciation in the coming ten years will fall short of what we saw in recent decades.

With China basically a low inflation emerging market, we expect most of this trend REER appreciation to take place in the form of nominal exchange rate appreciation, rather than relatively high inflation.

In our baseline we expect capital inflows and outflows to become more balanced in 2018. That should allow the macroeconomic forces to put appreciation pressure on the CNY.

Louis Kuijs is Head of Asia Economics at Oxford Economics. This article is excerpted from China: Any Further CNY Slide Will Be Modest, a research briefing report published on November 28, 2016.